If you hang a left out of the Hotel Belvedere, then turn right and ride uphill for about 60km, you’ll end up at the Cippo Carpegna, the highest point within a sensible day’s ride of the hotel.

I’m from Bath and Bath has short, steep hills, so a day like this is something a lot different, and one that I missed out on last time I came to the Belvedere. I told myself: this time I will climb it. I even got up early, stuffing some ham down my maw even as they were laying it out and nicking a couple of croissants for pocket food. 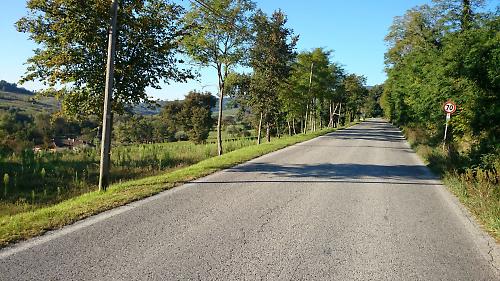 After a quick climb up to San Clemente to get the legs going, it’s a swoopy drop down to the Conca valley, and the ascent begins. Except it’s not really an ascent, it’s a flattish valley road that rises very gradually between the towns, and the turn offs to interesting places on top of the surrounding hills. Mercatino Conca, 27km in, is where you’d probably say the proper climbing begins. And the ride changes character here too, as nearly all the valley traffic turns right for the climb to San Marino. After the town, the road narrows and the inclines get steeper. Nothing horrific, just a few extra percent on the dial. 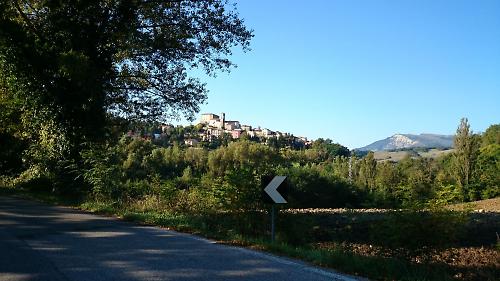 Up the valley the town of Montecerignone appears, imposing on its hilltop. The smell of roasting coffee pervades the streets; we pass the Pascucci factory, the local coffee. But the road doesn’t go into the town; round a couple of lazy, still-dew-covered hairpins it winds, and up a long false flat, and suddenly Montecerignone is below us, a valley town instead of a hilltop one. And still the road climbs, and still the steeps get a little bit steeper and the speed drops a bit more. There are scuffles in the leaves as the lizards basking at the side of the road dart for cover as I approach. I always hear them; never see them. 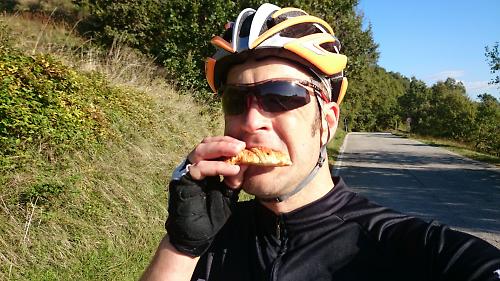 We’re well out of the valley now, on a rising plateau with the eastern cliff face of Monte Carpegna towering above. There’s no way up that side, so the road ducks down to Ponte Cappuccini and rises more steeply through the town of Carpegna, hard now, climbing to the col on the main road at about 1,000m. and just before that, there’s a small right hand turn. Via Cippo. 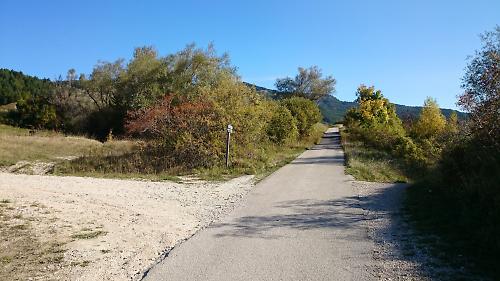 The roads before were quiet, but there’s nothing on this one. Not a soul. The surface is good: there aren’t enough cars coming this way to do it any damage. it’s only just wider than a car, rising through grassland before the forested slopes of the mountain offer some welcome shade. Now there are steep sections, above 12%, that have me out of the saddle, heart thumping, but even then there’s a quiteness and remoteness to this place that takes the edge off the pain. It’s a climb to savour, this. To take in the smells of the forest and the glimpses of bigger mountain ranges way off in the distance. At one point a barrier blocks the road to vehicles, and leaves and pine needles litter the surface after that, with no wide car tyres to brush them aside. And still it rises, still steep but never too steep, before the road flattens past a viewpoint.

And suddenly I’m heading downhill and I look back to see Marco Pantani staring back at me. This is the top. 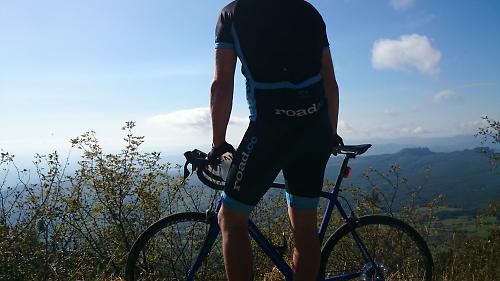 It’s time to gaze out on the vastness of the view as range after range of peaks fade to grey in the distance and the late morning haze. Il Pirata trained here. He would have climbed it, rolled down, had a coffee at the bar on the main road, filled his water bottle at the tap in the children’s playground and ridden it again, in the time it took me to do it just the once.

And then there’s nothing to do but turn the bike round, and backtrack. This climb doesn’t really go anywhere. Tiptoe back over the gravel and leaves to the main road and the bar, and a mars bar and a Coke in the biggest glass the lady can find. And down the other side of Carpegna, and the rare joy of a rockfall that’s closed the road to motor traffic, allowing me the closed-road licence with lines in hairpins that’s exhilarating until it’s terrifying. Fast roads in a different valley edge up the average before a keep-me-honest climb back up to under the San Marino cliff face, and the fantastic, open, swooping descent down to Faetano, a road I’d ridden up the day previously and mentally marked: I need to go down that. 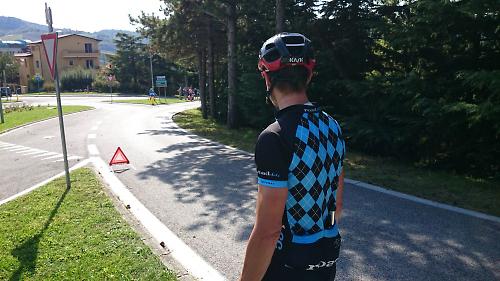 But all is not well on the Faetano road. There’s Mat, and a hazard triangle, and there’s Felice, the guide, who having come round a blind bend on the descent encountered a tourist’s car stopped in the middle of the road, having missed a turning. He nearly made it past in the foot-wide gap that was available to him, but not quite. As I arrive they’re putting him in a neck brace; the ambulance has followed me down the Faetano road from San Marino. Up at the hospital the news is pretty good, considering how bad it could have been. Felice looks to have come away with a fractured collarbone and plenty of road rash for his troubles.

It’s a reminder though. Of the margins, and how the odds are sometimes stacked against us. It’s a fast descent, a tree-lined road with poor sight lines at that particular point, there’s a central reservation only there, because of the junction. It’s a tourist, missing a turn and stopping. If it were only three of those things, there’s probably at most a bit of swearing and line adjustment, and everyone rolls through fine. As it is, four out of four makes for trouble. But like Mat says to me, you can’t ride round every corner expecting a brick wall. Heal up soon, Felice. And thanks for the guiding.

road.cc is in Italy from 4-11 October at the Belvedere Hotel in Riccione. Visit the Italy Week page to find out what we’ve been getting up to