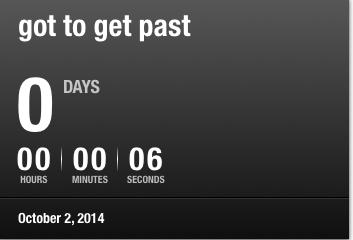 Six seconds
That crucial overtake, what's it actually worth?

Six seconds. It doesn't sound like a lot, does it. What can you do in six seconds? Time is up by the time you've thought about it.

Cycling along through the suburbs, I can hear the engine behind me, it's been dropped a gear, it's a diesel, it's not the kind of engine that likes high revs. It's 7.42am, riding my usual extended route to work.  I have a look behind me, it's a white Ford Transit pickup, the engine's still being squeezed.

A left-right through a mini-roundabout and T-junction, I'm quicker through these; a road bike on skinny tyres is alway going to be quicker.  The din from the van momentarily disappears.  Out of the right turn and in a few seconds the van is back on my wheel, there's not much of a draft benefit for him, but he's there.  The revs increase again and start to get closer, there's a car coming the opposite way, the noise drops back again.

I have another look.

The strained sound from the engine disappears again as the driver puts it up a gear.  No sooner has he done it, but the car coming the opposite way has passed and the 90bhp diesel is once again complaining as it gets shoved back down the box.  This time the noise in my right ear gets louder, the van passes, he's given me plenty of room, it's a wide road, no other traffic.

I pass the point on the road where it turned off into a housing estate.

Have you figured out what you can do in six seconds yet?  I'm still struggling to find anything worthwhile.