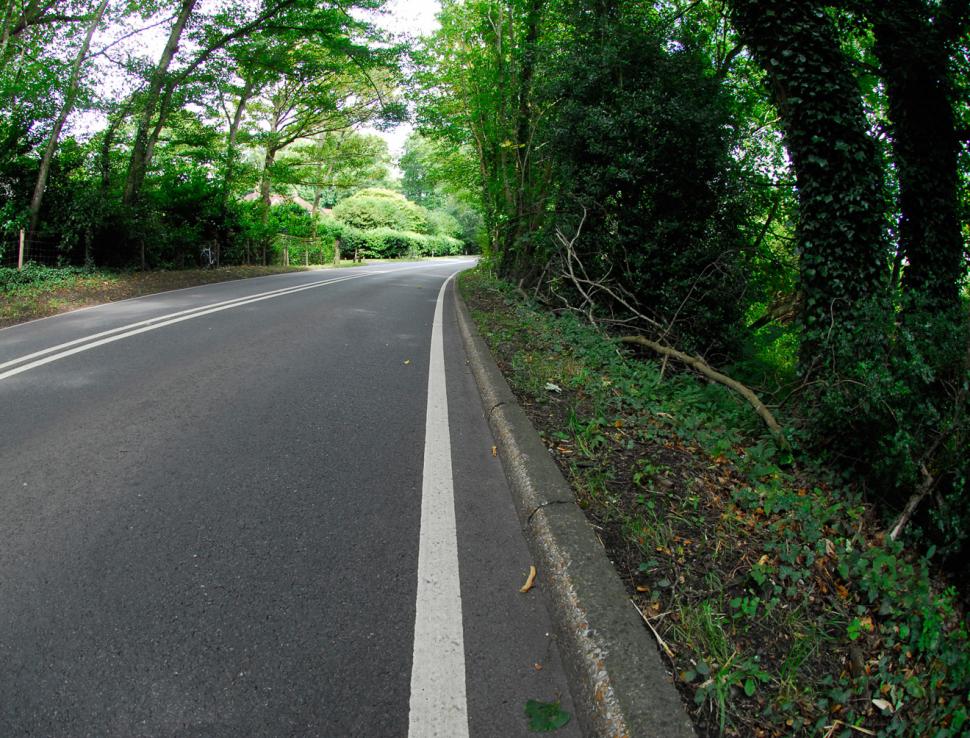 I was driving along yesterday, in a reasonably good mood despite the fact that I was behind a steering wheel rather than handlebars, when a car going the other way suddenly leaped off the road - this is not a fanciful description, to my eyes it literally did leap - and jumped into the woods. There followed a very loud sound which could only be a car smacking into a tree.

I turned around as soon as it was possible and pulled up to the scene of the accident, which was downhill around the bend which had served as a slingshot. There I saw the driver, a young woman, crawl onto the road then lie down.

A man was already there, on his phone. He motioned for me to back up to provide a safety cushion, which I did. After putting my hazards on I got out, walked over to the woman, and sat down on the kerb next to her.

She was intact, though what I took to be her tibia was now poking out of the new hole in her jeans. She was lucid. She was also, as you would expect, in a lot of pain. She slapped the cold pavement again and again, having no other remedy for her anguish and frustration. She then gave me her hand to hold, which I gladly did as I really didn't know what else to do.

The man who had called for an ambulance (business suit, paunch, not to be trifled with as he later hustled along what he took to be a rubbernecker) started directing traffic. Another man (construction? fuel delivery? he was wearing a bright vest) walked up to join the rescue party.

The woman asked me to retrieve her phone, which I miraculously found without too much digging around in her car, the inside of which appeared to be filled with the booty of a car boot sale. I sat down again and handed it to her. She was very concerned to call her boss at a nearby diner. The man with the safety vest approached us and became the switchboard operator, at one point putting the phone on speaker and holding it so she could talk to her brother between gasps and moans, in what was surely the worst call of his day.

She went back to slapping the pavement, shaking her head as if saying No to the whole situation, and shouting out in pain. I was chiefly there for hand-holding if and when she wanted it.

Presently a passing GP gave the tableau the stability and reassurance it required. She asked the woman the questions necessary to form a quick medical opinion, and instructed me to hold the woman's head still. Her roadside manner was excellent.

The police arrived, but surprisingly to me at the time, kept their distance.

As I braced the woman's head I could not help but reflect on how I had been in a situation very much like this only a few years ago, in the back seat of another wrecked car with another wracked body, struggling to be of assistance.

The woman's boss turned up and took over hand-holding duty, her familiar face hopefully a welcome anchor in the sea of strangers.

The woman berated herself for "Being so stupid!", was hushed by our chorus of "No! Don't be silly." She felt sick to her stomach and was worried she'd broken her arm as well. She wanted to get up. She started hyperventilating. She did nothing I couldn't sympathise with, having been laid out on a few roads myself surrounded by people who seemed intent on helping me despite my best efforts.

When the ambulance arrived the paramedic told me to hold her neck much more firmly than I had been doing; a lesson I won't forget if there's ever a next time. When she came with the neck brace I was relieved at my station.

What do you do after such a close encounter with trauma? Depending on your life CV, you may well experience a little trauma of your own. The woman's boss was also looking a little shell-shocked.

The police interview was accomplished with the minimum of fuss ("How fast was she going?" Not fast enough for me to want to add to her woes), though by the rolling of his eyes after his chat with the businessman I'd evidently just missed a clash with authority. Then I was on my way back up the road, the woman with any luck now on a trip to a morphine-induced stupor.

When I got home I wandered over to a neighbour, in need of normalcy. He was working on the glorified shed he's bought to turn into a house. We climbed the scaffolding and talked about planning permission, water seepage fracturing roofing tiles, and eventually, the bloody things that happen. He's seen much worse than I have; the aftermath of a motorcyclist smashing into a van ("He kept trying to get up onto his broken arms and broken legs"), a construction site story almost out of the movie Final Destination (the guy lived); a bus blowing up right before his eyes on 7/7 in London. I feel like I've led a sheltered life.

This experience, especially when added to my last one, has prompted me to start looking to enroll in a first aid course. I'll be writing about that in part II.