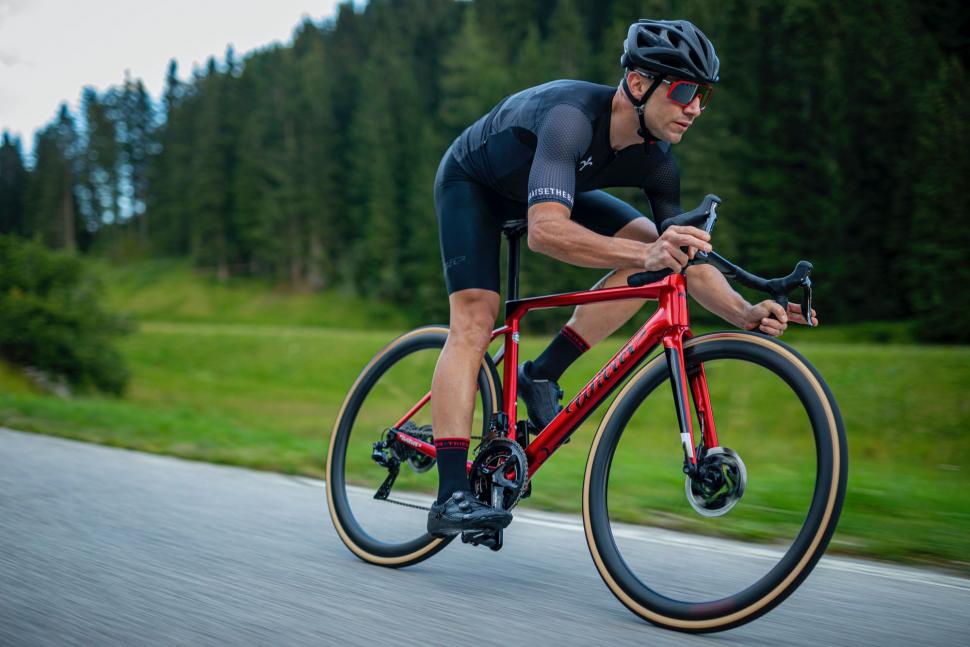 Brand new disc brake-only road bike is lightweight, it's built with electronic groupsets, and is destined for the pro peloton. See what Wilier says here
by Mat Brett

If you’re short of time: 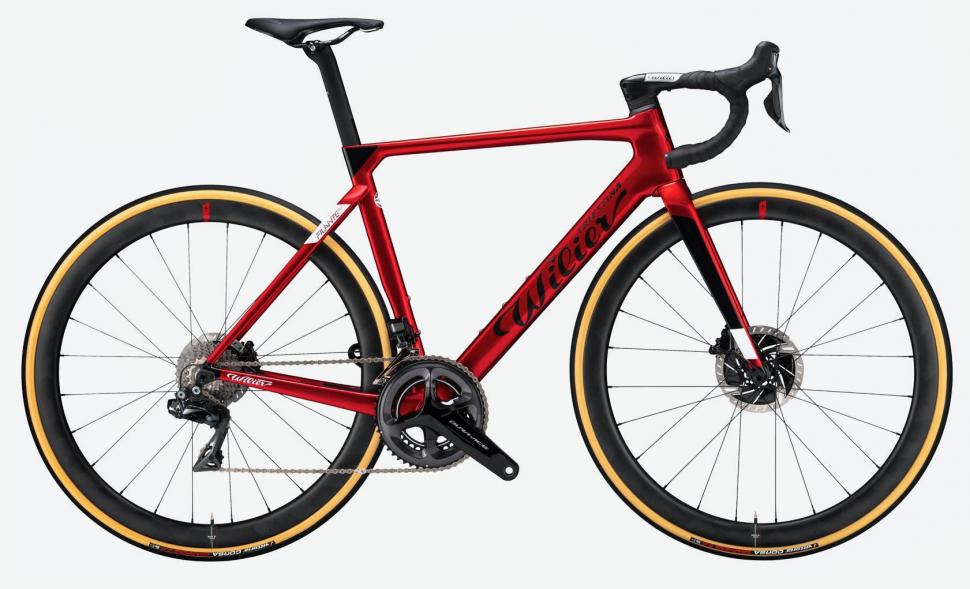 Wilier uses truncated NACA (National Advisory Committee for Aeronatics) airfoils as the basis for Filante SLR’s tube profiles, as it did for Cento10Pro, its existing top-level aero road bike. The difference, though, is in the cutoff at the rear of the tube.

“We revised the aerodynamics in the real world,” says Wilier’s R&D technical manager Claudio Salomoni. “Obviously, we developed Filante in the wind tunnel – you can't avoid using it. However the wind tunnel has limits. 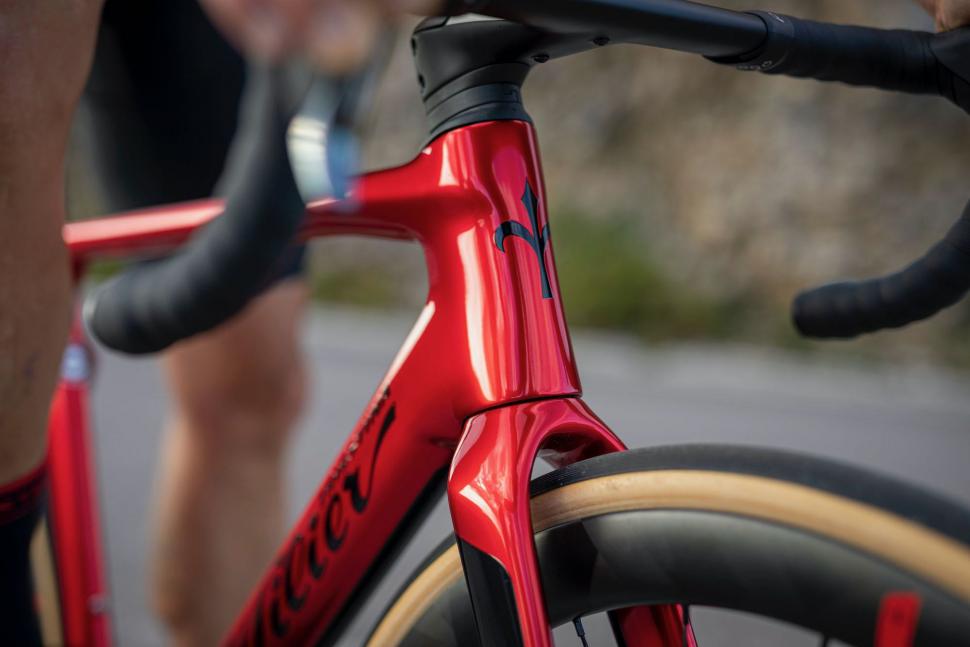 “The wind is very clean. This is good because of course the data must be consistent… but we know that things are different in the real world. The wind comes from different directions; there are so many more problems than those tested in the wind tunnel.

"We have the movement of the cyclist moving forward, we have crosswinds that change when you go around a curve, then when you’re in the middle of the peloton the other cyclists create turbulence, so the real world is very different from the clean wind tunnel.

“We still use NACA airfoils… but unlike previous frames, this cut was softened. It doesn’t have the sharp edges of the Cento10Pro. The design is much more rounded. 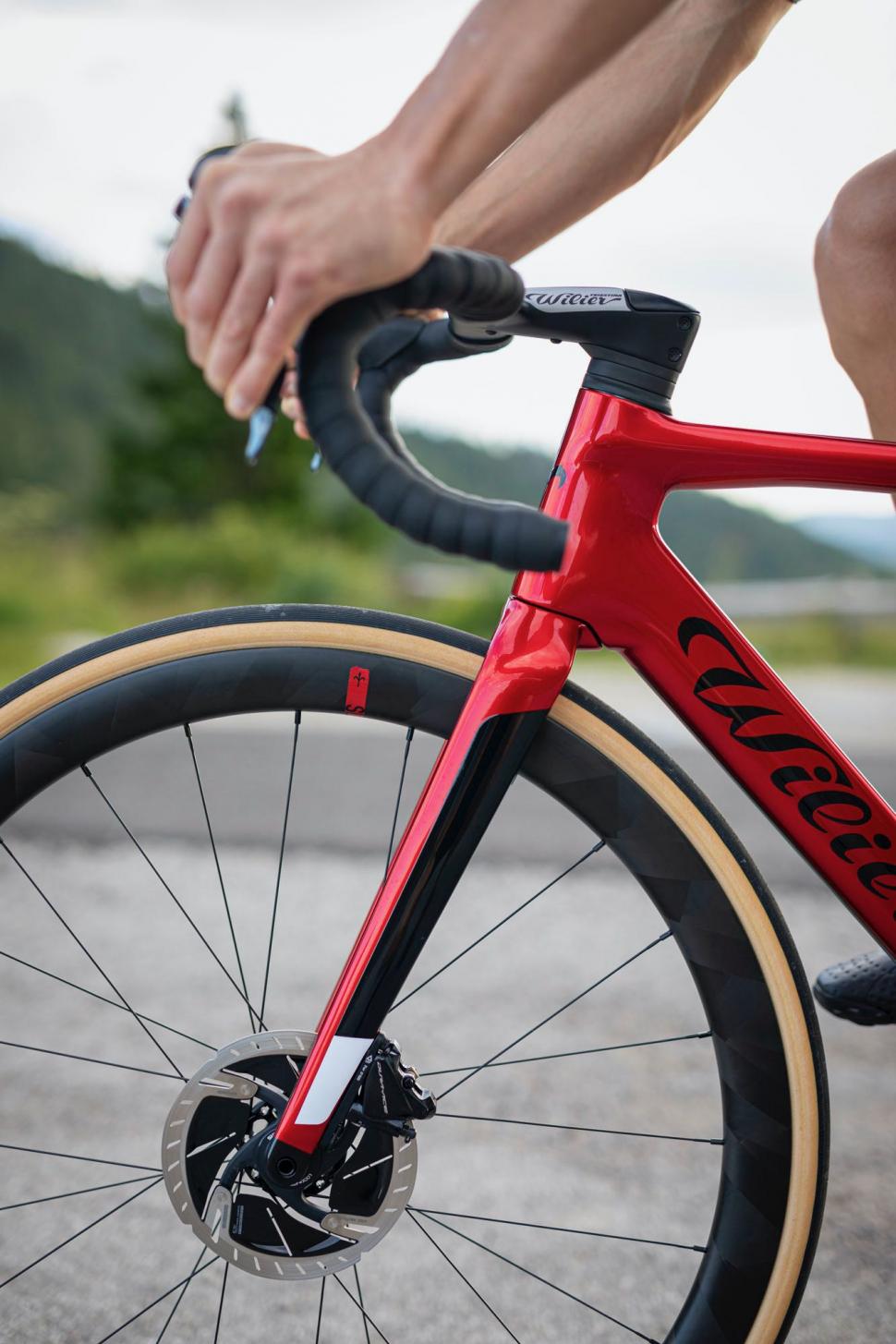 “This is a great help in the real world because the boundary layer – the wind particles closest to the frame – adhere more to the profile than on the Cento10Pro. As we change the yaw angle, the frame maintains its good aerodynamic characteristics.”

Yaw angle is the result of the bike/cyclist’s direction and speed, and the wind angle and speed. Wilier tested the Filante SLR at yaw angles from +20° to -20° yaw and says that the new design results in ‘significant’ aero improvements in real world situations, although it doesn’t offer any figures comparing the new bike with the Cento10Pro or rivals from other brands.

Wilier has used wide fork legs on previous models as a means of reducing turbulence and thereby improving the overall aero performance, and it has gone further than ever on its new bike. 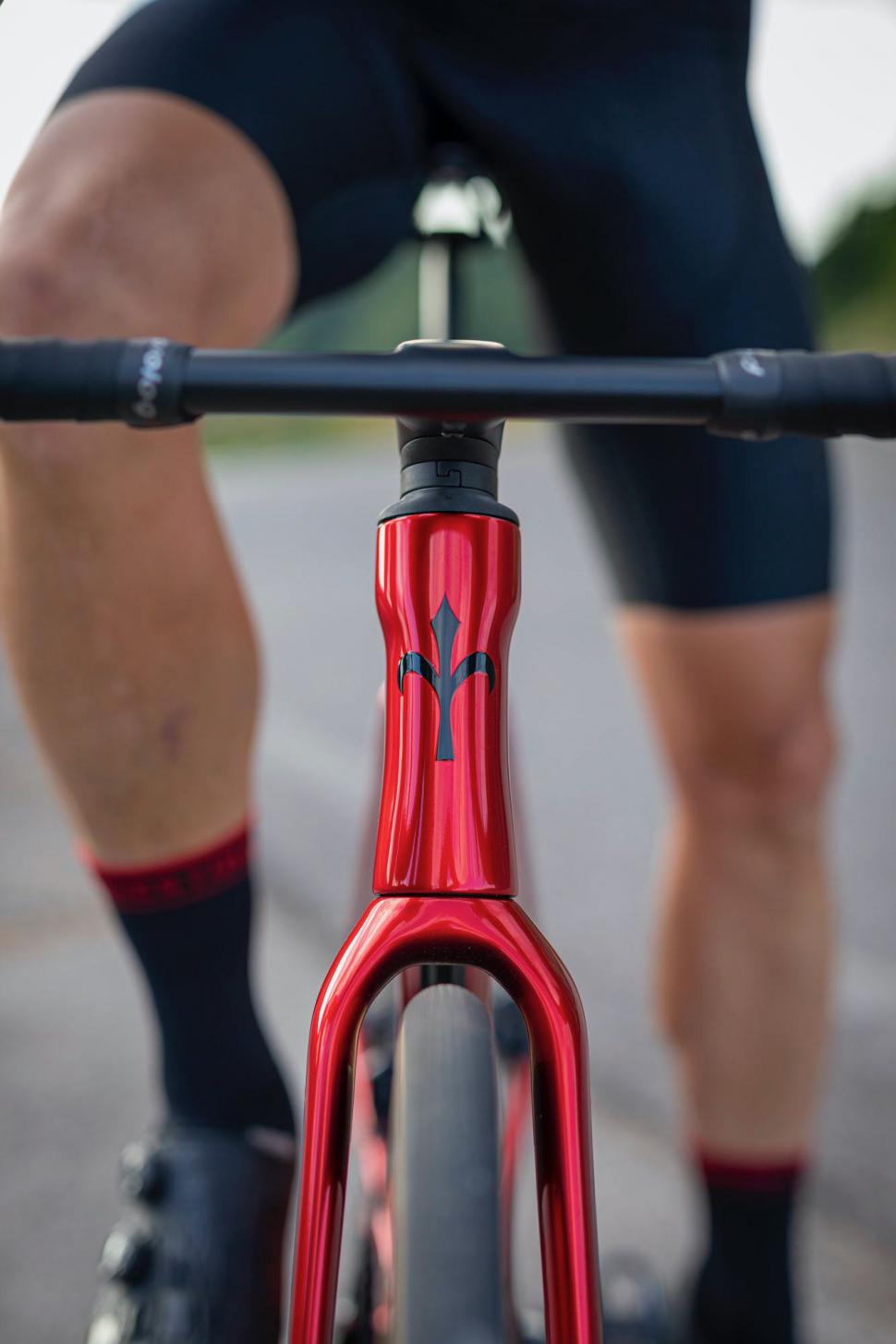 “The Filante SLR’s fork legs are 7mm wider than those of the Cento10Pro, and that’s quite a difference,” says Claudio Salomoni. 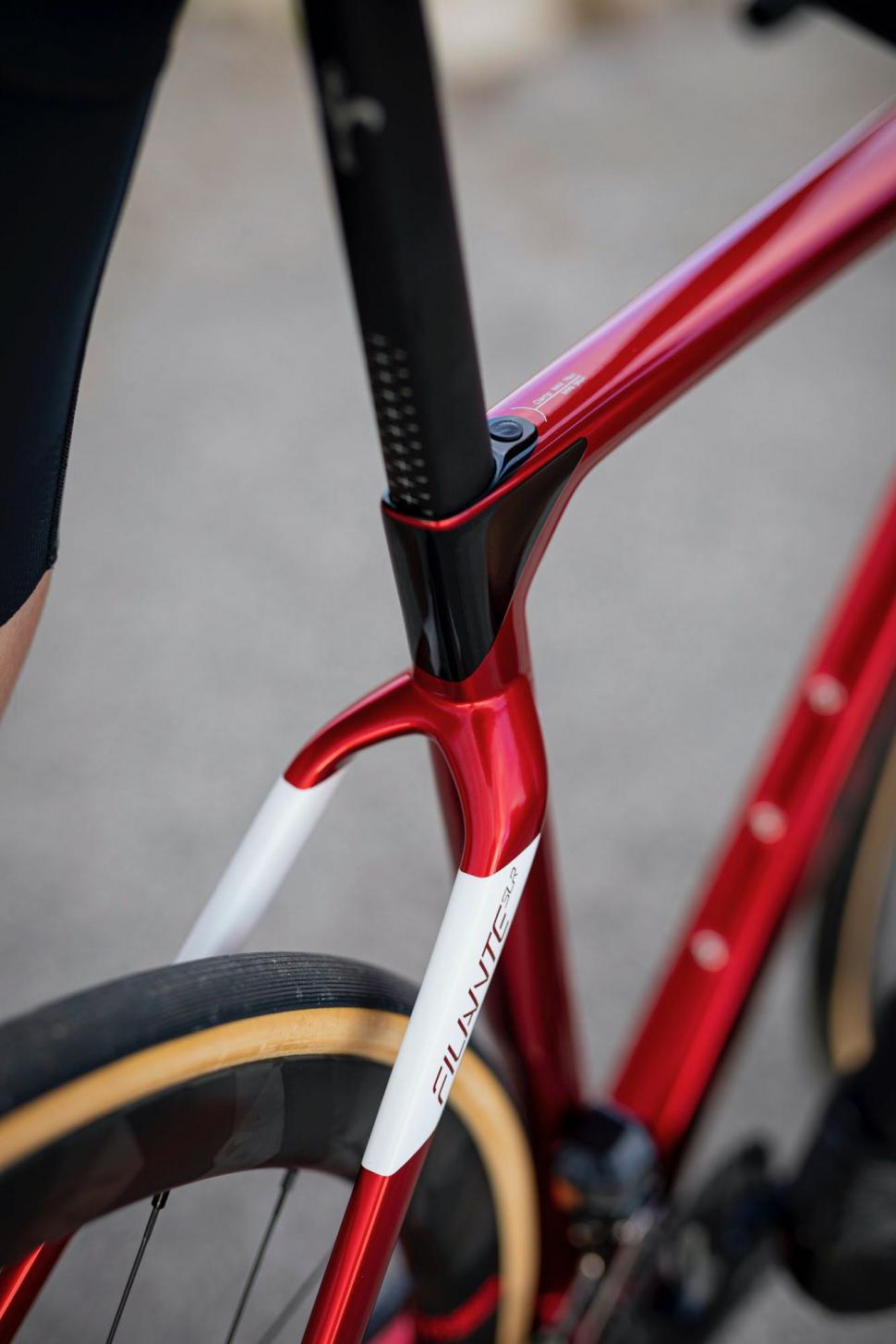 “We also worked on the design at the back. If you look at the bike straight on you’ll see that the very wide rear triangle is hidden perfectly by the design of the fork. This is also a little trick that gives us an exceptionally low CX [drag coefficient].”

Wilier says that the more rounded profile at the rear of the tube profile also keeps the weight down. 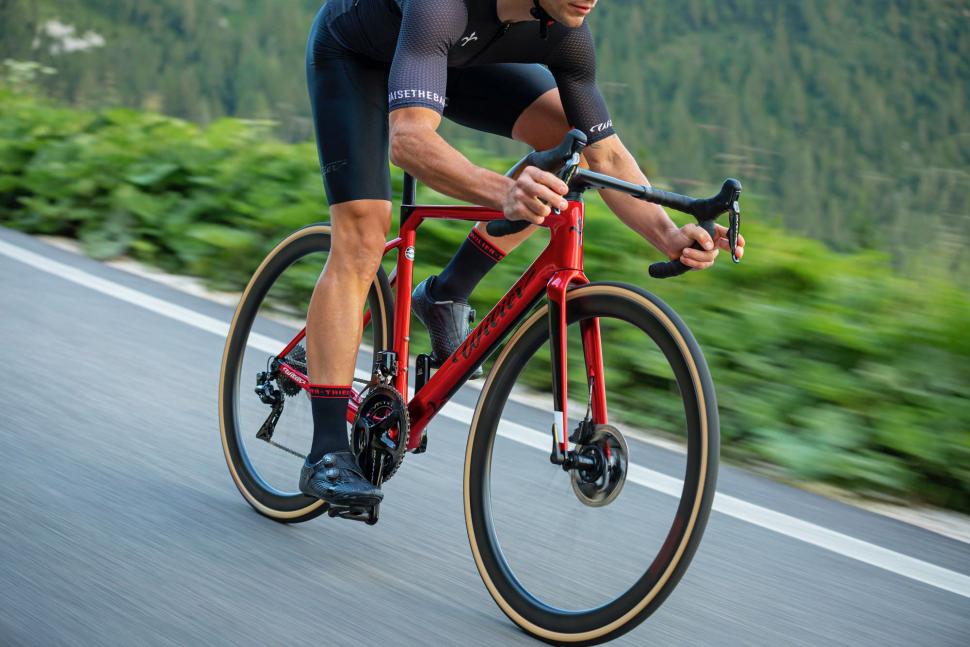 “Compared with a sharp corner design, we need less material and above all we have perfect control over the resin,” says Claudio Salomoni. “Removing excess resin is the key to a lightweight frame.”

Filante SLR is made from the same materials as the Zero SLR: HUS-Mod carbon fibre and liquid crystal polymer. When the Zero SLR was launched, Wilier told us that HUS-Mod was a blend of “the highest quality fibres” and that the liquid crystal polymer helped improve the absorption of vibration. That’s about all the info we’ve been able to get out of them! The details are secret, we’re told, and can't be shared for commercial reasons. 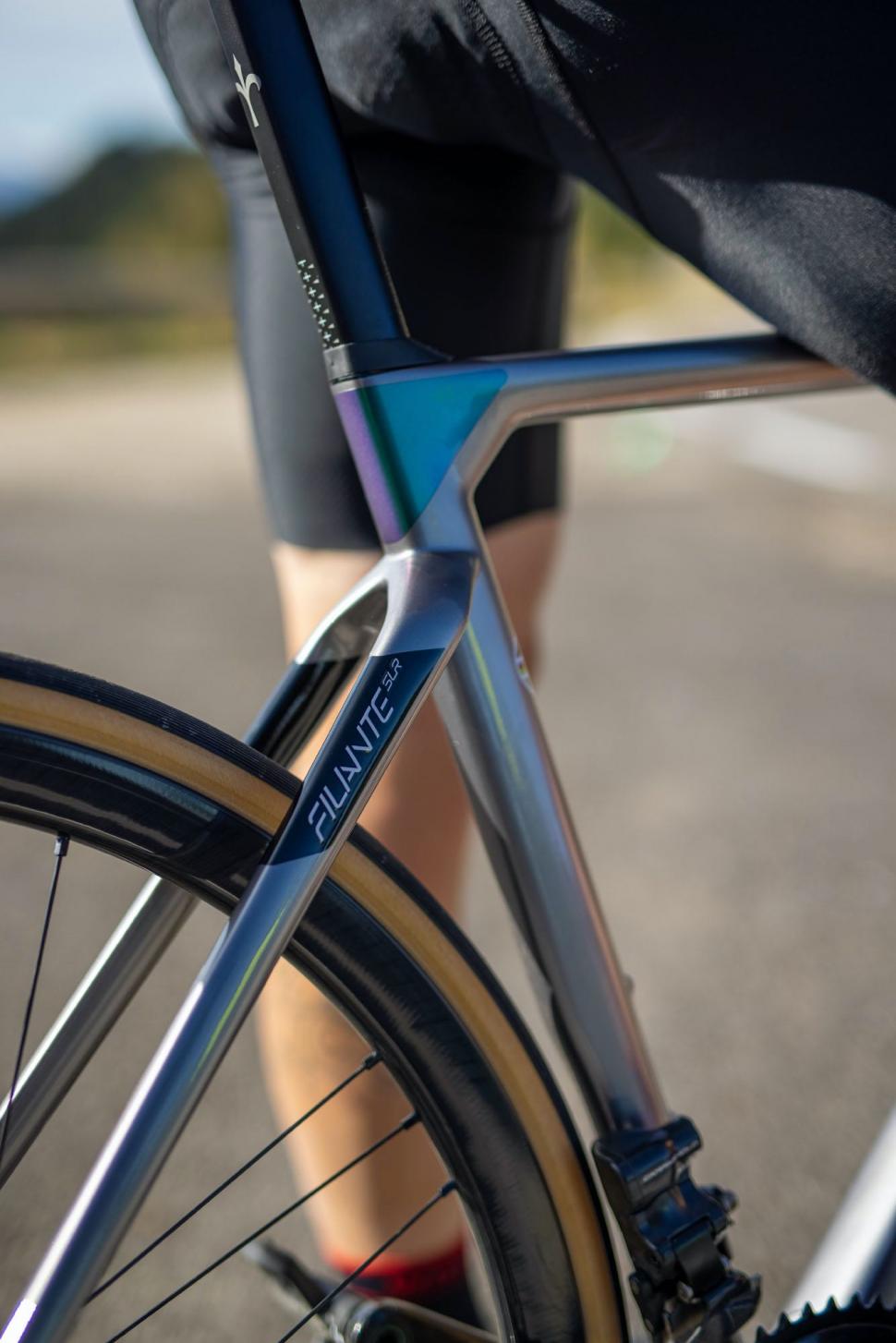 Read about our first ride on the Wilier Zero SLR

The Filante is said to weigh 11% less than the Cento10Pro while remaining very stiff, so the stiffness-to-weight ratio is higher.

The brake hoses and shift wires (if there are any) are fully internal, running through a monocoque handlebar/stem and into the frame. 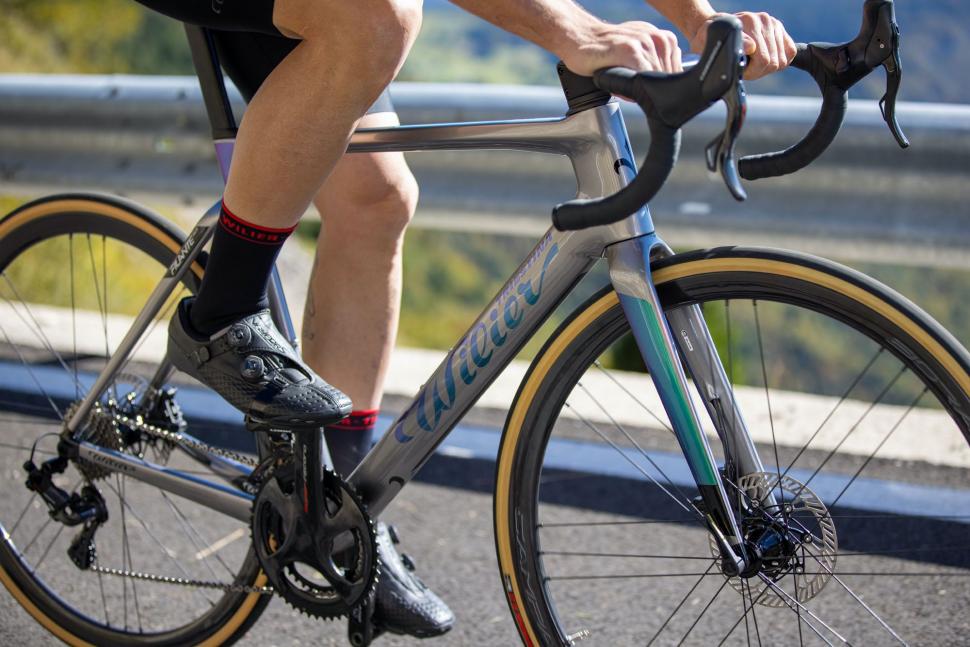 Hitting the scales at a claimed 365g, the new Filante bar is about 50-60g lighter than Wilier’s first monocoque bar, the Alabarda, introduced back in 2016. It’s also said to be stiffer. The stem section is designed to sit level with the ground to minimise the frontal area. 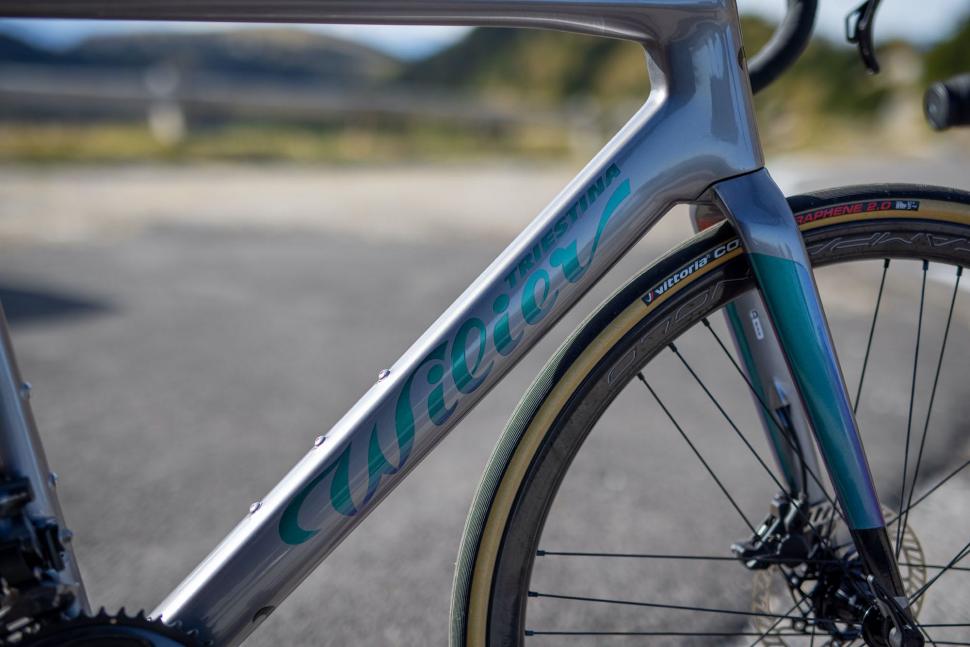 Wilier has used a D-shaped fork steerer profile in recent years to allow space for hoses/cables to run internally, but it reverts to a round tube with the Filante, which helps with stiffness. Wilier has patented its own new bearing design that allows the hoses/wires to pass through.

The head tube still takes 1 1/4in bearings, which is unusual for a bike with fully internal cables, helping to improve the aero performance.

The Filante is available in six different frame sizes and Wilier says that the ride characteristics are the same across the board.

“Every frame has different tube sizes,” says Claudio Salomoni. “The different dimensions allow the same performance on both very large and very small frames. The stiffness, fluidity and quality of the ride are replicated across the range of sizes.” 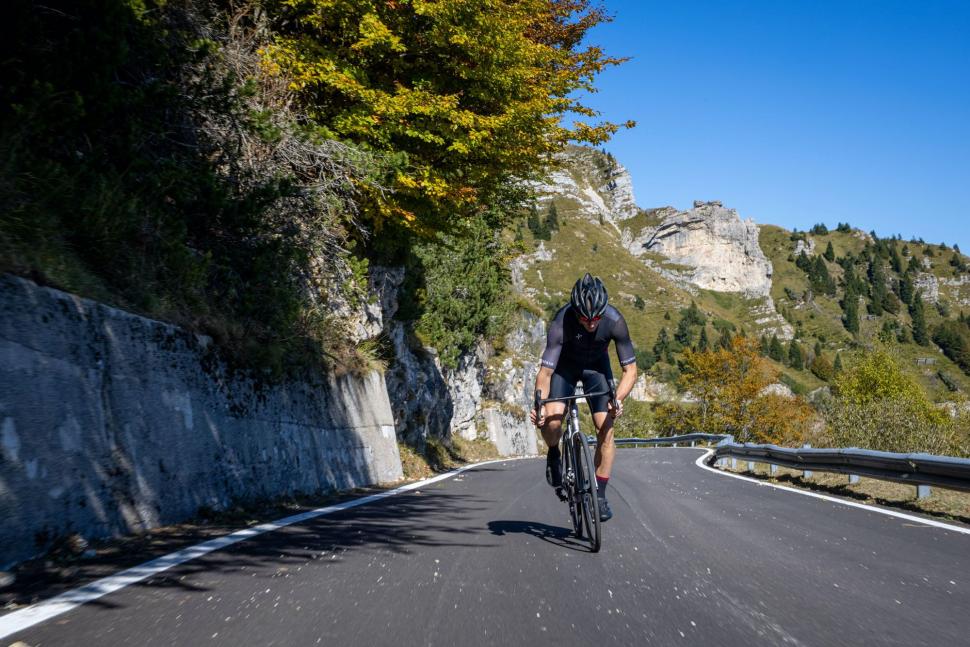 The idea of those unusual stem section lengths is that no fit sizes overlap and that one position is never more than 3mm away from the next.

The seatpost is available in both an inline version and with 15mm of setback (the position of the clamp in relation to the centre of the post), offering another possibility for altering your ride position. 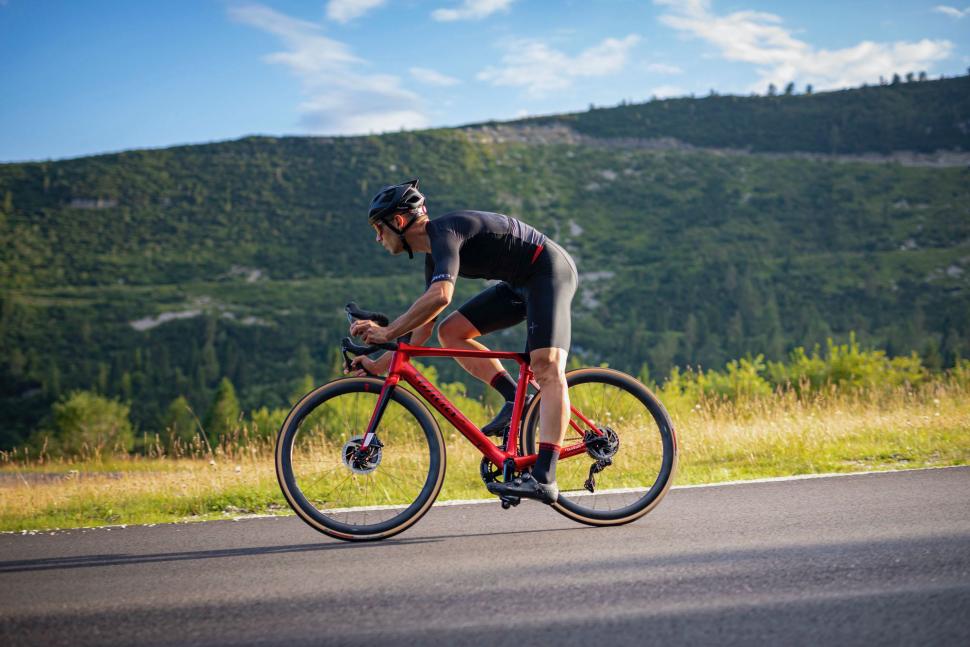 As mentioned up top, the Filante is disc brake only (there’s no rim brake version) and takes only electronic drivetrains.

These models are available: