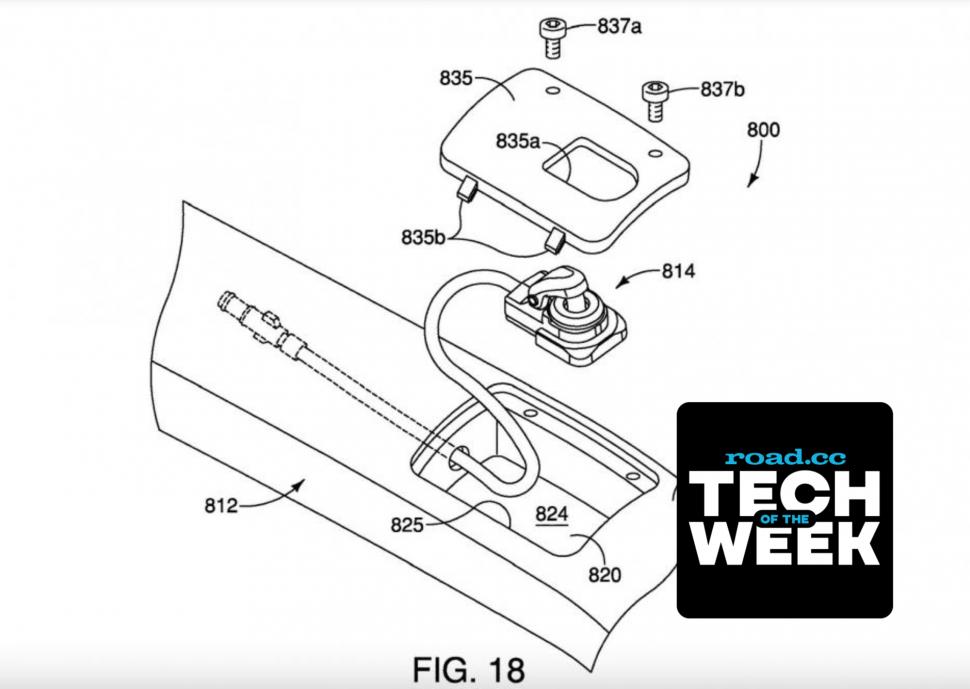 Shimano Tech of the week

It's time to check out the latest tech stories from the world of cycling - everything from Abus' updated seat-mounted flexible bike lock, new clothing from Santini with Paris-Roubaix themed lycra and Stolen Goat's graffiti-style 'Hell Yeah' kit, to a collab between Italy's Cinelli and football club Inter Milan. We're starting, though, with a look at an interesting patent we came across...

What do you think of Shimano's unique new handlebar design?

Shimano has had a patent application published that shows a handlebar that accommodates Di2 switches in recesses on the top sections for a sleeker appearance. 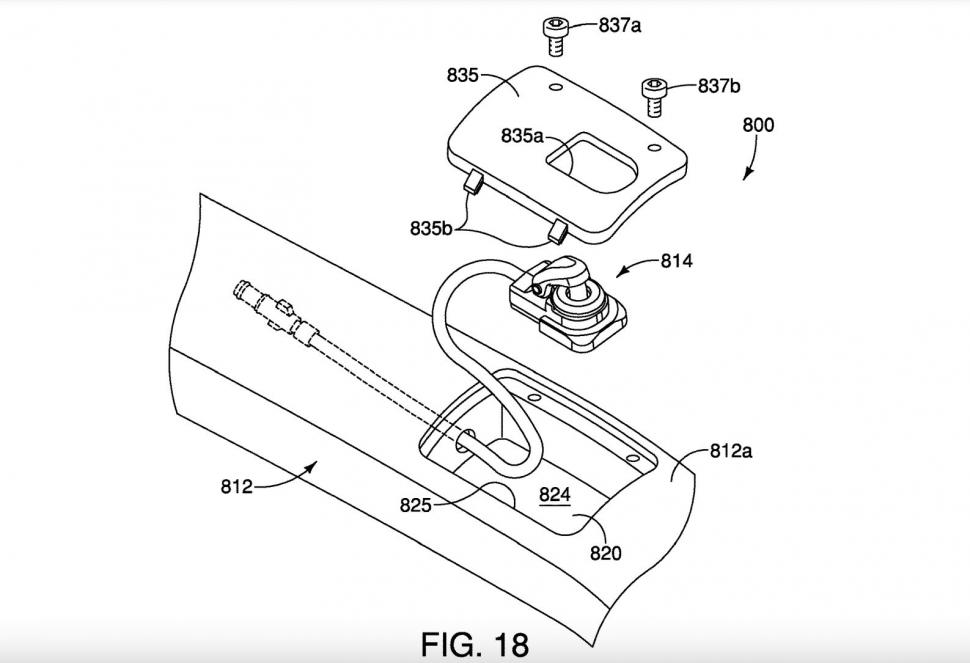 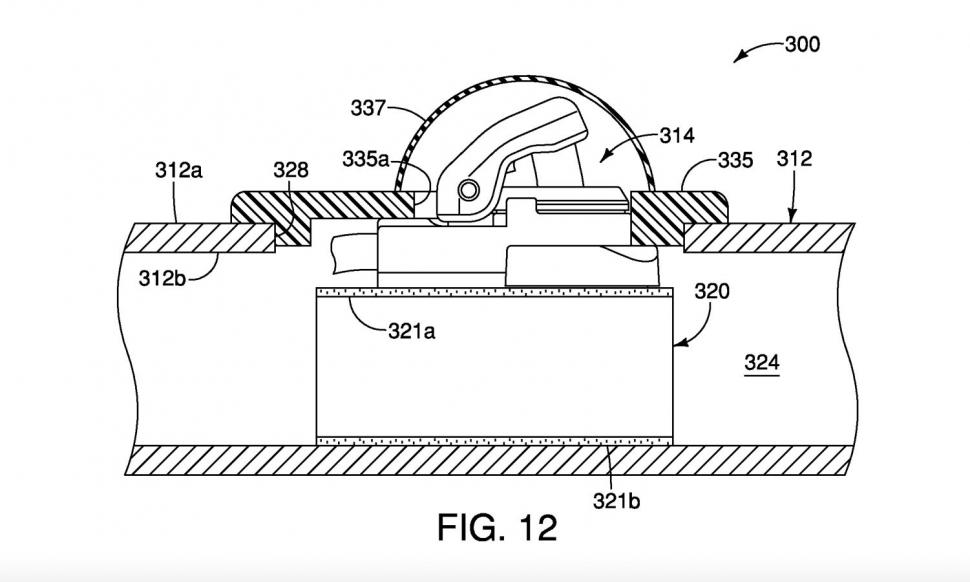 With Shimano’s new handlebar design, the switch is positioned at least partially internally, and is partly covered “to provide a visually pleasing appearance”.

Shimano suggests that the switch could be operated through a flexible cover that keeps water out. 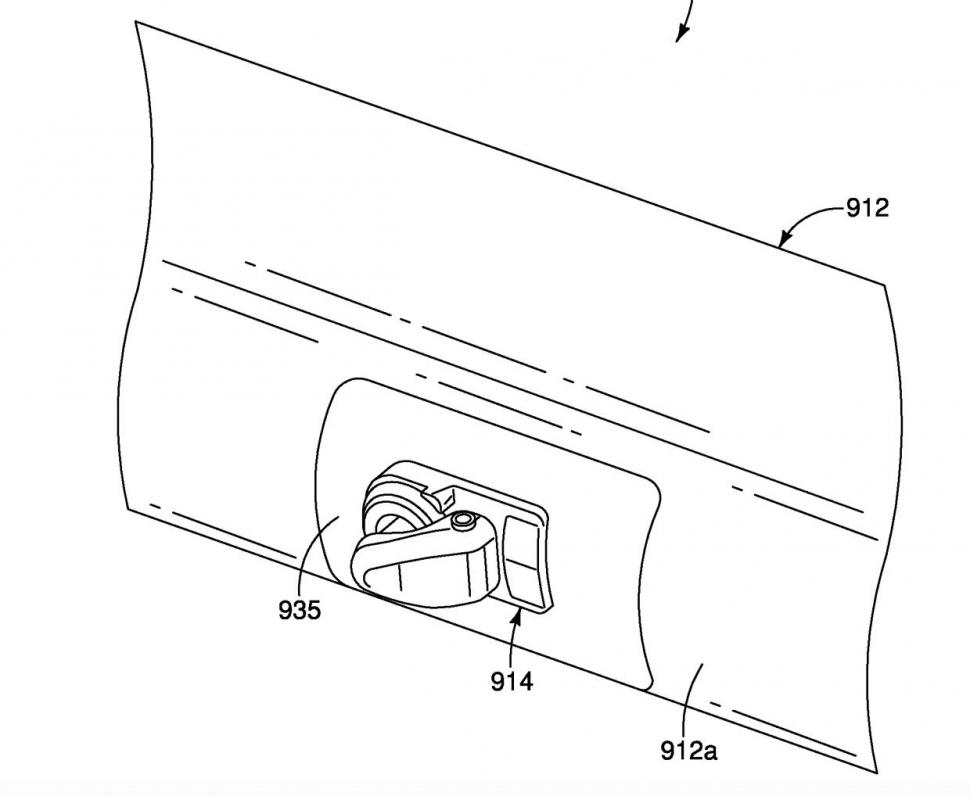 We couldn't say for sure whether this design will ever be released to the public but in these days of ever more integration, we'd say there's a good possibility. 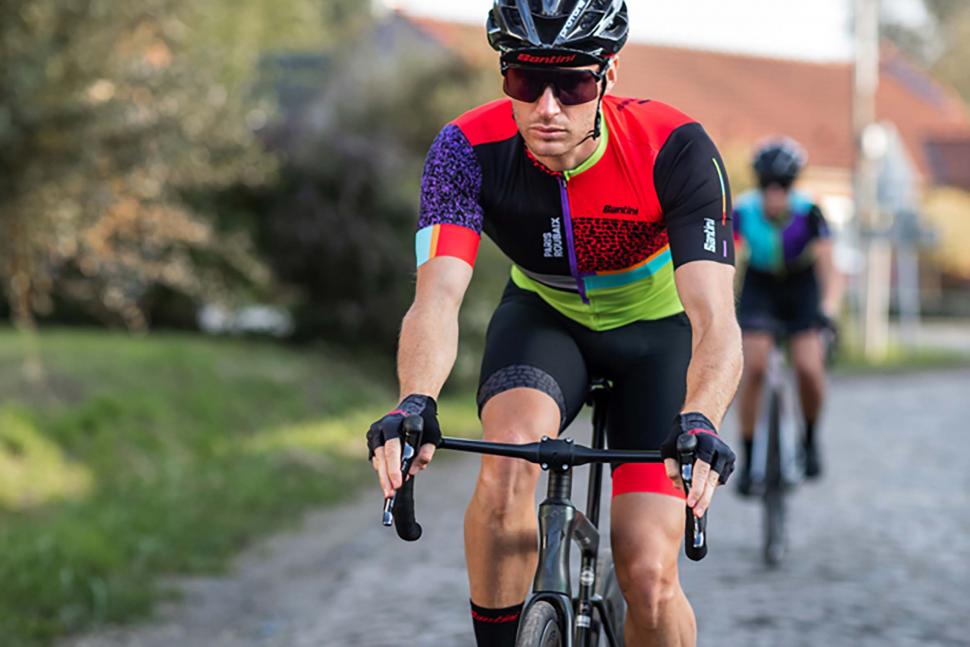 The Paris-Roubaix Femmes avec Zwift is coming up on Saturday 16 April and on the Sunday is the 119th edition of the men’s Paris-Roubaix. For the occasion, Santini is launching two new ranges for both men and women.

The Paris-Roubaix range includes jerseys and technical t-shirts which have graphics that have been inspired by the colours and patterns used on the race route to mark out the cobbled sectors and rate their difficulty. Then there’s the L’Enfer du Nord capsule collection with fiery colours in a nod to the hellishly difficult stretches in the Hell of the North.

The jerseys and technical t-shirts of both collections are combined with bibshorts, a baselayer, jacket, vest and accessories.

The jacket, for example, is made with Polartec’s NeoShell, which is claimed to be the “world’s most breathable fabric technology”.

What’d you think of the designs?

Both collections are available now at www.santinicycling.com.

Strava stands with the people of Ukraine

The fitness tracking app has taken steps to help provide aid, as well as show its support and stand in solidarity with the people of Ukraine. 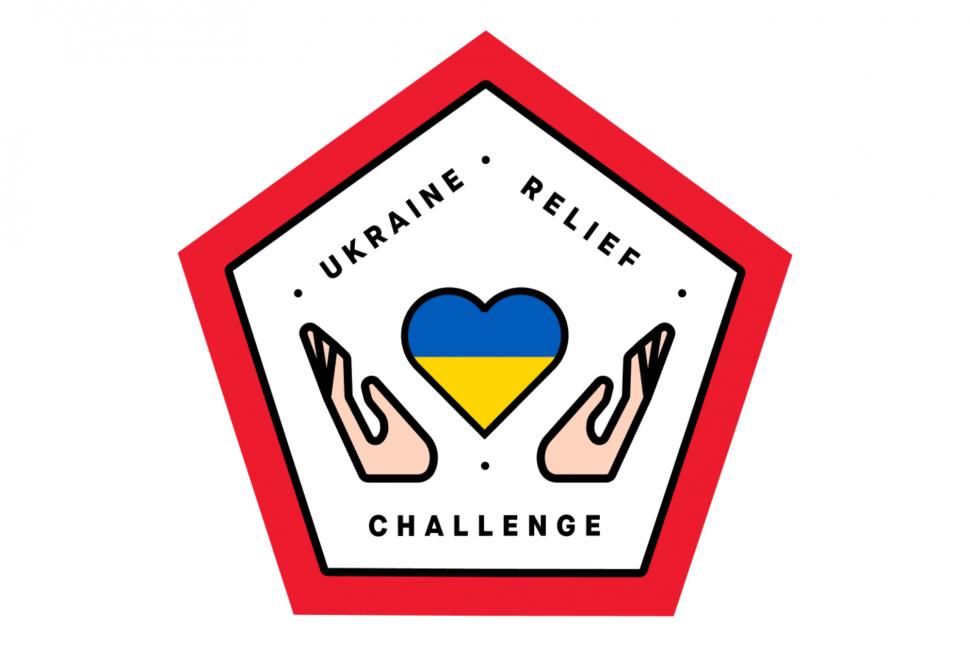 First up, it has launched its Ukraine Relief Challenge, asking users to just record 5 km in any distance-based activity to earn the badge, then to share it with friends and encourage them to sign up and pitch in. As part of this challenge Strava encourages participants to donate as well and support the Red Cross’ efforts here. It has also made donations to this charity that provides direct relief – including food, water, blankets, medical and hygiene supplies, and first aid training – to those affected and displaced by the conflict.

There’s a new ‘Support Ukraine’ map type for all GPS activities that’s been added to encourage all athletes to use it and show their solidarity with Ukraine.

Sustainable bike brand COCO-MATBIKE.UK has partnered with Cyclescheme to offer a Cycle to Work scheme option for those looking to save money on an eco-friendly bike.

Each bike is handcrafted in Greece using plantation-grown American Ash (Fraxus Americana) as, according to COCO-MATBIKE.UK, wood extends the bike’s life cycle and each adult ash tree provides enough wood to make 50 bikes. A tree is also planted for each bike sold.

When it comes to the wooden frame, COCO-MATBIKE.UK gives a lifetime guarantee, showing the brand is certainly confident about how durable these bikes are.

COCO-MATBIKE.UK has its Mentor foldable bikes for commuters available in both 2-speed and 5-speed, and there’s also an e-bike version.

Savings are made by employees paying for their bike from their pre-tax salary. Buying a bike in this way reduces employees' taxable income and creates a tax saving.

Cycling Souvenirs has a new range of Monuments prints available from the illustrator Gareth Llewhellin. You can choose between these great looking pieces representing Paris-Roubaix, Milan San Remo, Liege Bastogne Liege and Giro di Lombardia - gotta say the cobblestones of Roubaix is our favourite, what’s yours? 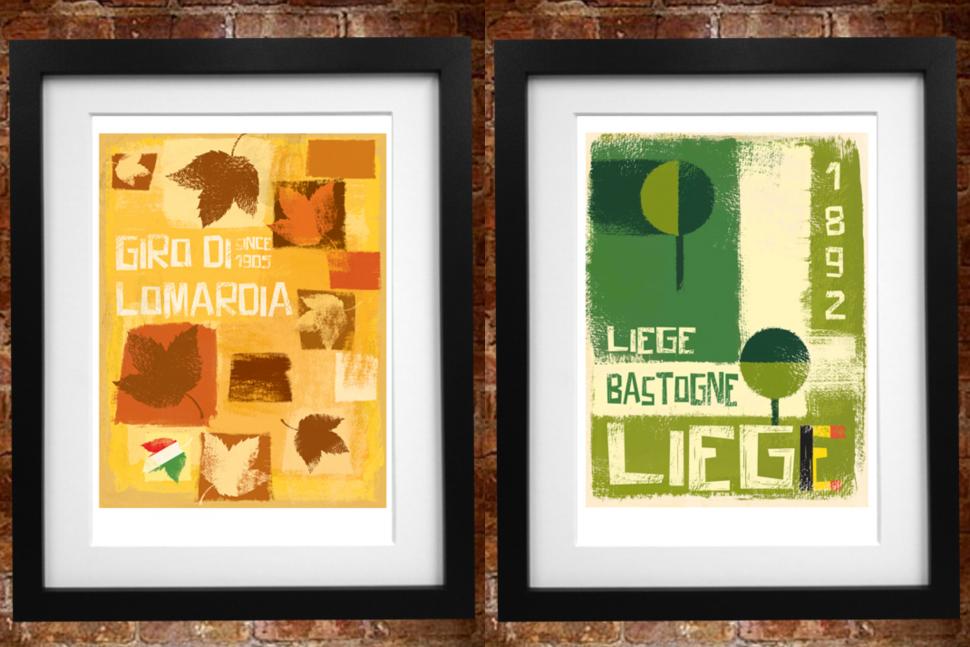 The Abus Bordo 6000 is the brand’s lightweight flexible option which comes in a compact design, making it suited to commuting or long-distance touring 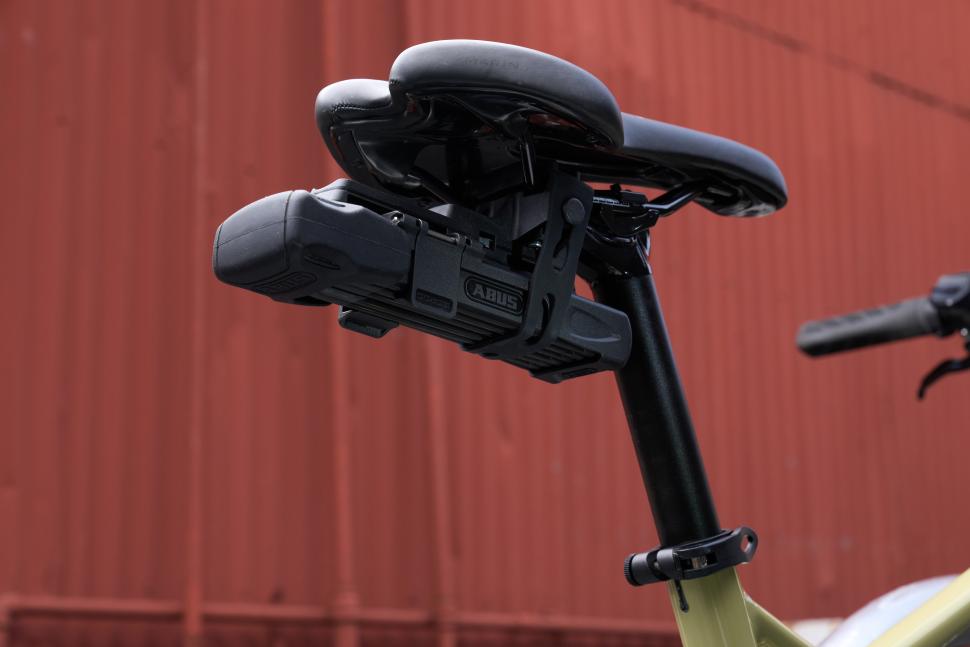 Abus’ new 6000K lock (£99.99) is designed to offer ease of use with a new saddle mount as well as improved defence against theft with an XPlus key cylinder for high protection against picking, a single link coating, and an updated cover.

The new SaddleFix bracket attaches to the seal rails to provide easy access to the lock while also keeping the main triangle open for e-bike batteries and bottles.

Get your own ‘Hell Yeah’ Stolen Goat kit 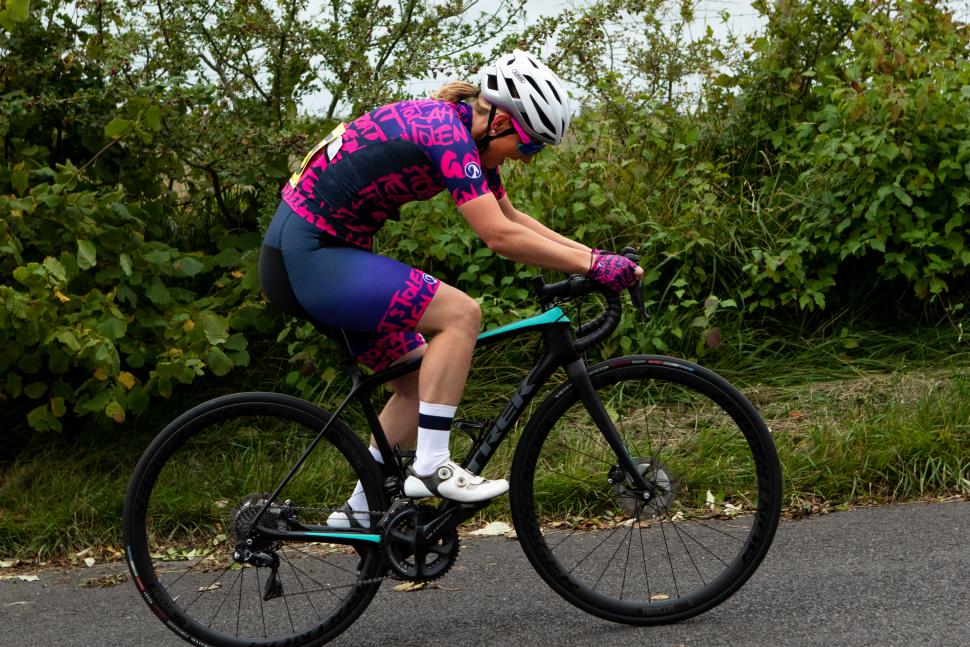 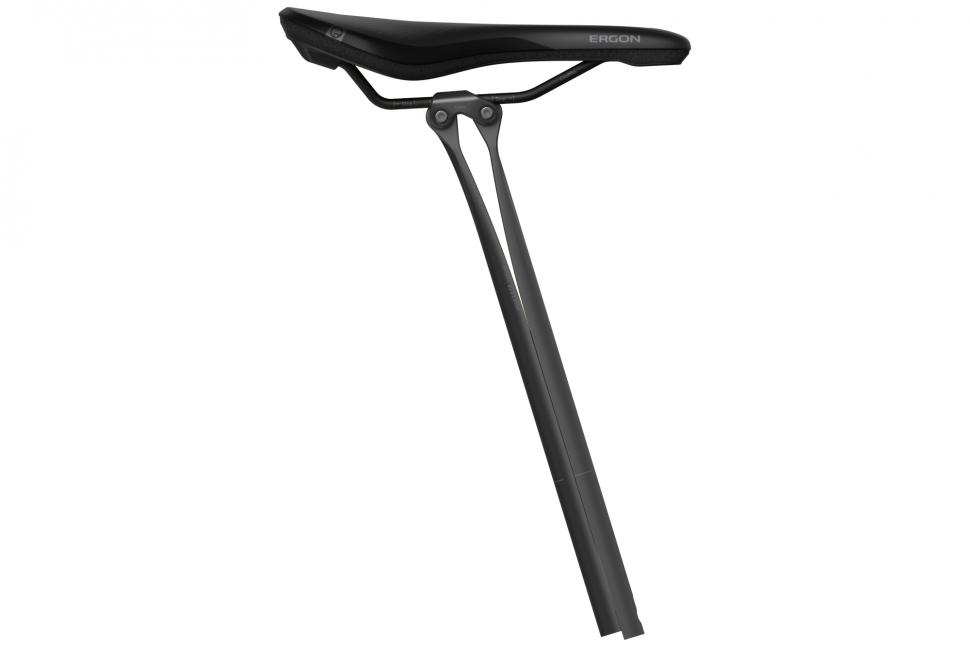 Available in zero set-back and 25mm set-back versions, the CF Allroad Pro Carbon has a 27.2mm diameter. Each CF Allroad offers loads of adjustability and two Flip Heads for round and oval 7x9 rails. 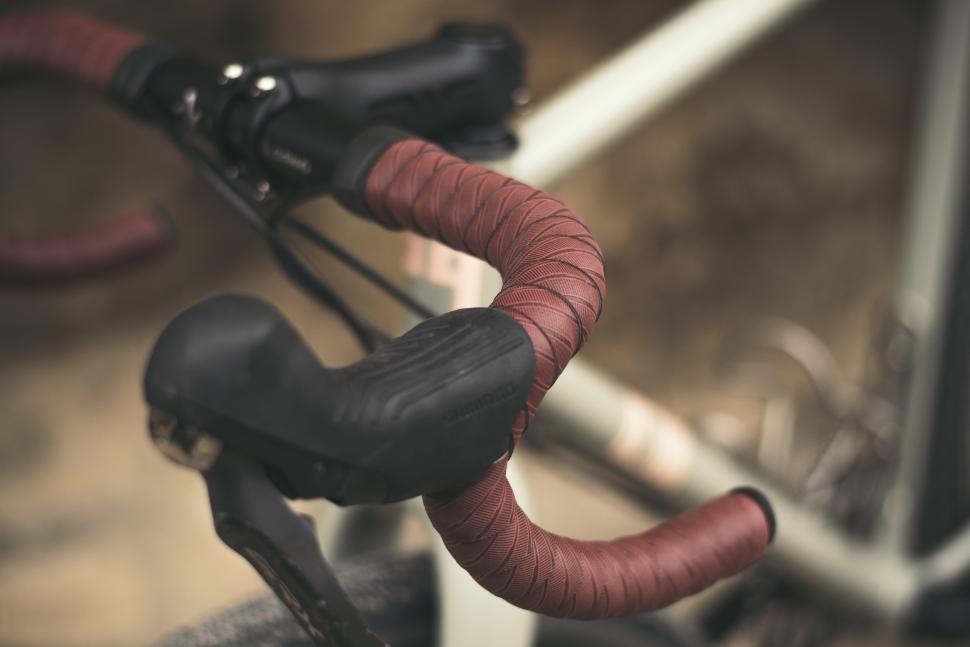 Then you’ve got three BT bar tape models with adapted thickness to cater for all road bike disciplines and Ergon has built-in a wrapping guide for thinner or thicker wrapping.

Cinelli teams up with Inter Milan for clothing and bike collection 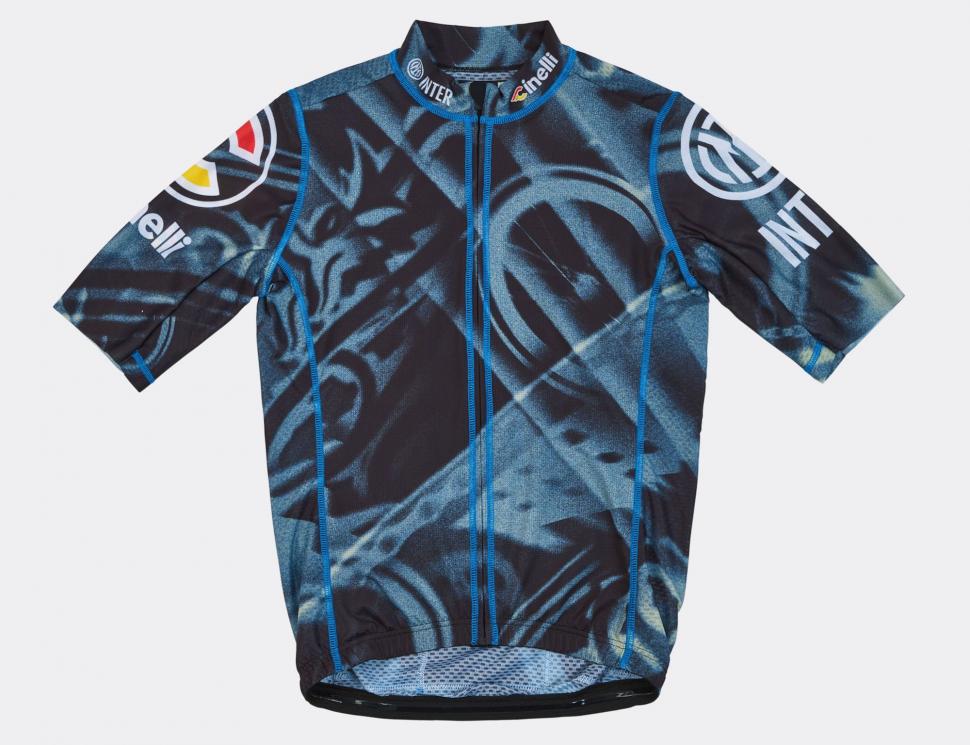 Italy's Cinelli has teamed up with Inter Milan – yes, the football club – to create a limited-edition collection of cycling clothing and bikes. 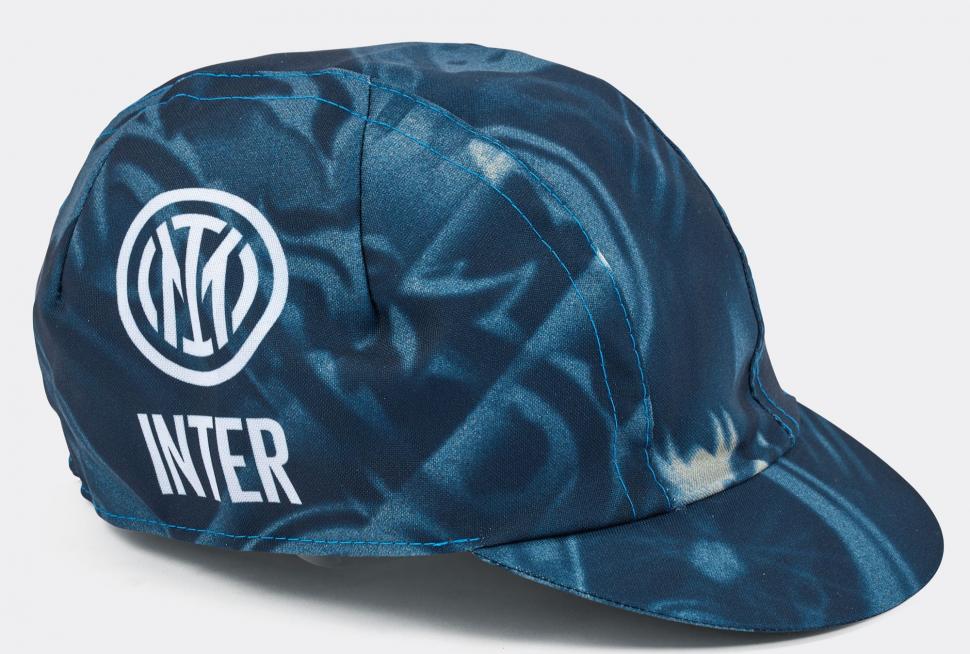 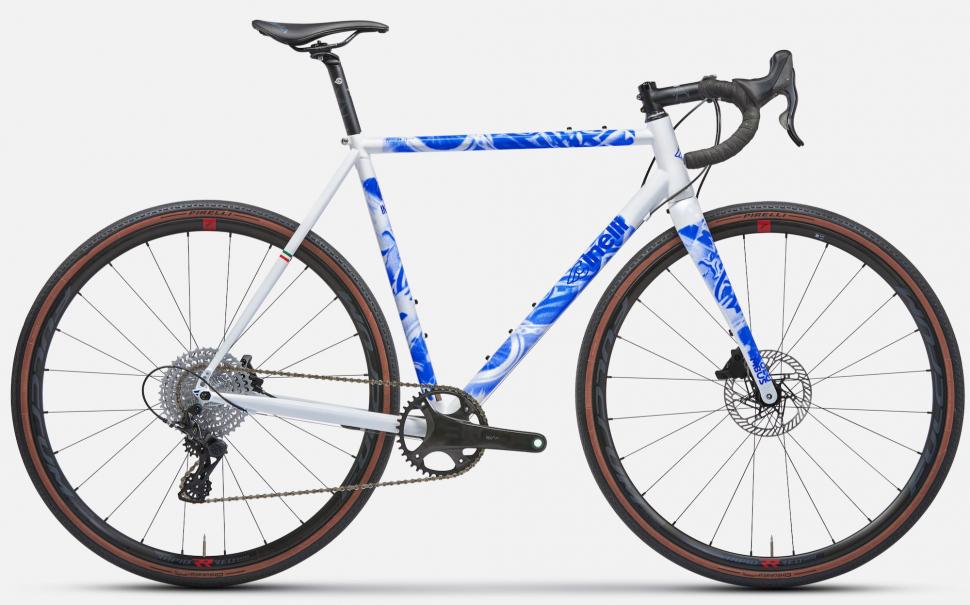 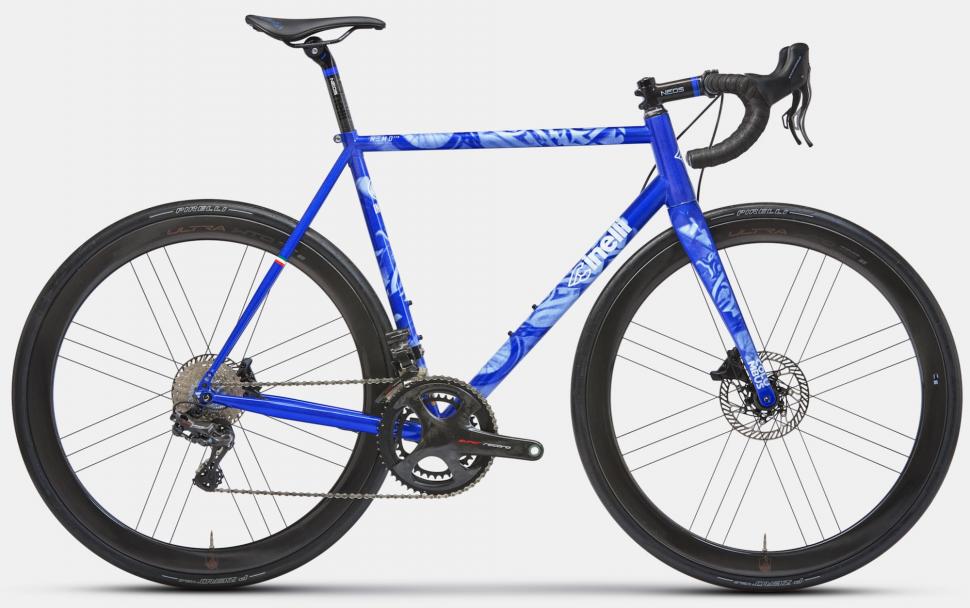 The other bike in the range is the flat handlebar Cinelli Vigorelli (below, €1,990), made from triple-butted aluminium with a carbon fork. It has a flip-flop hub so you can run it with either a fixed gear or as a singlespeed, and it’s available in both white pearl and holographic blue finishes. 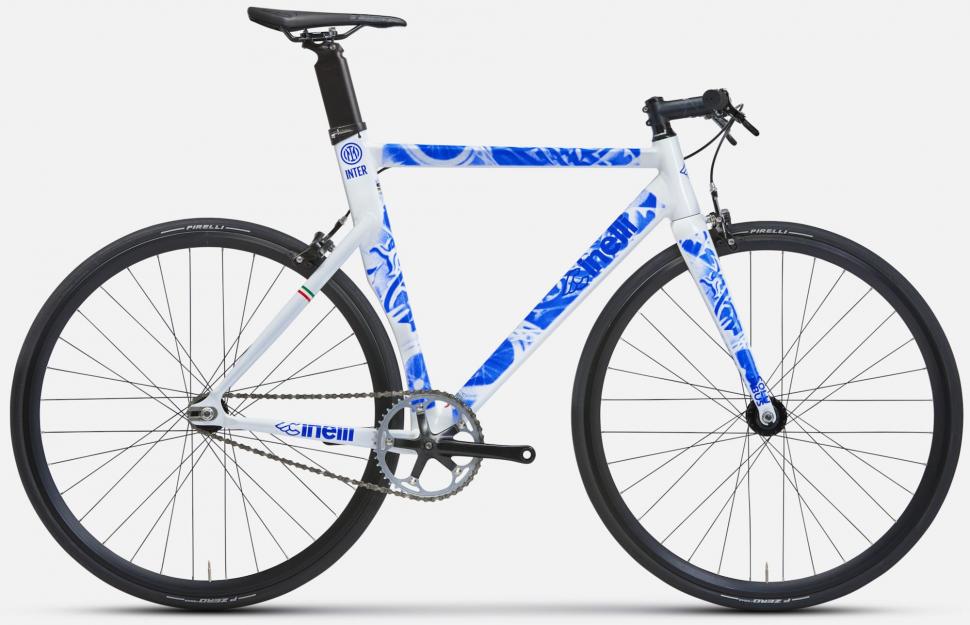 The second racewear drop will happen on 14 April and the items will be available for purchase at the Cinelli online shop. 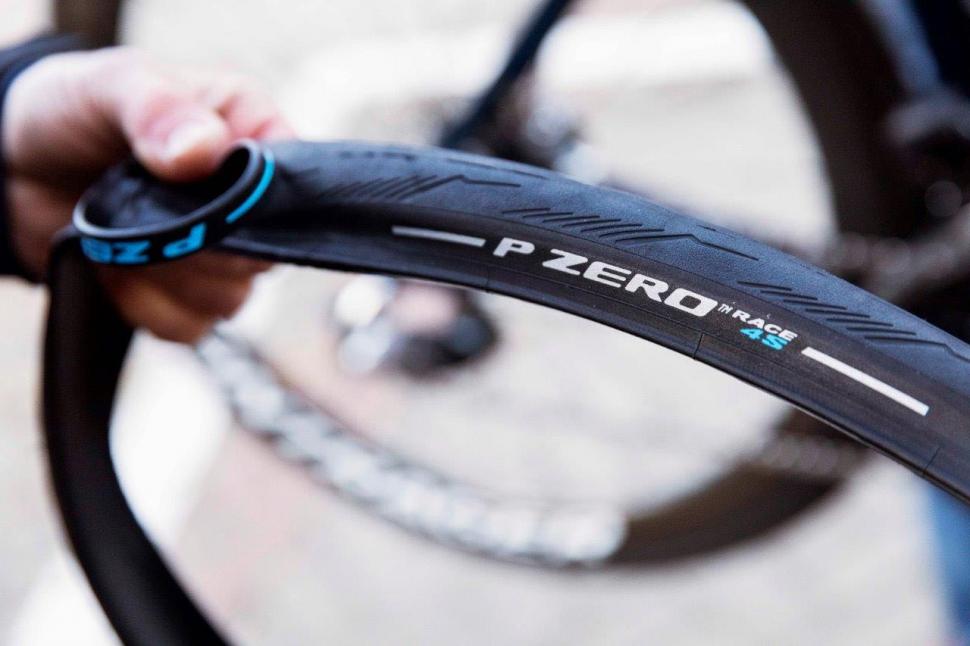 Pirelli has unveiled its new P Zero Race 4S clincher tyre, designed as a four-season model to provide durability, smoothness and grip in all temperatures.

"P Zero Race 4S takes up a prestigious inheritance, that of its predecessor P Zero Velo 4S, appreciated and awarded for its excellent all-round characteristics, particularly enhanced in cold weather conditions, and providing the performance of a racing tyre," says Pirelli.

"The new P Zero Race 4S confirms its performance in winter conditions but increases it in terms of durability, and even more so in summer, compared to its predecessor."

The Race 4S tyre uses Pirelli's new SmartEVO proprietary compound including a blend of polymers designed to provide a high level of performance even in colder climates. 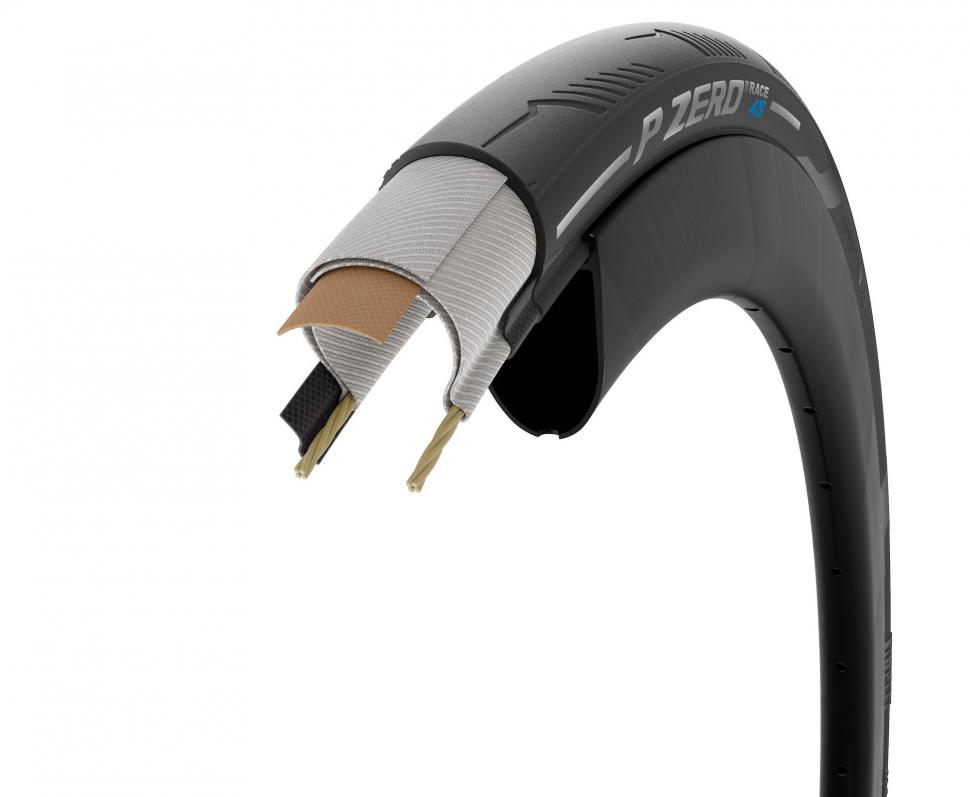 Like all other tyres in the P Zero Race range, the new Race 4S features a casing that's said to have been adapted for today's wide rim standards. Each size has a wider tread than the corresponding P Zero Velo 4S.

"The new P Zero Race 4S is the perfect choice for those who want a four-season performance tyre that offers a racing feeling all year round, whether racing or training," says Pirelli.

The P Zero Race 4S is the first 100% made in Italy product from Pirelli since the company returned to the cycling market in 2017.

We have a pair of 28s on their way for review on road.cc 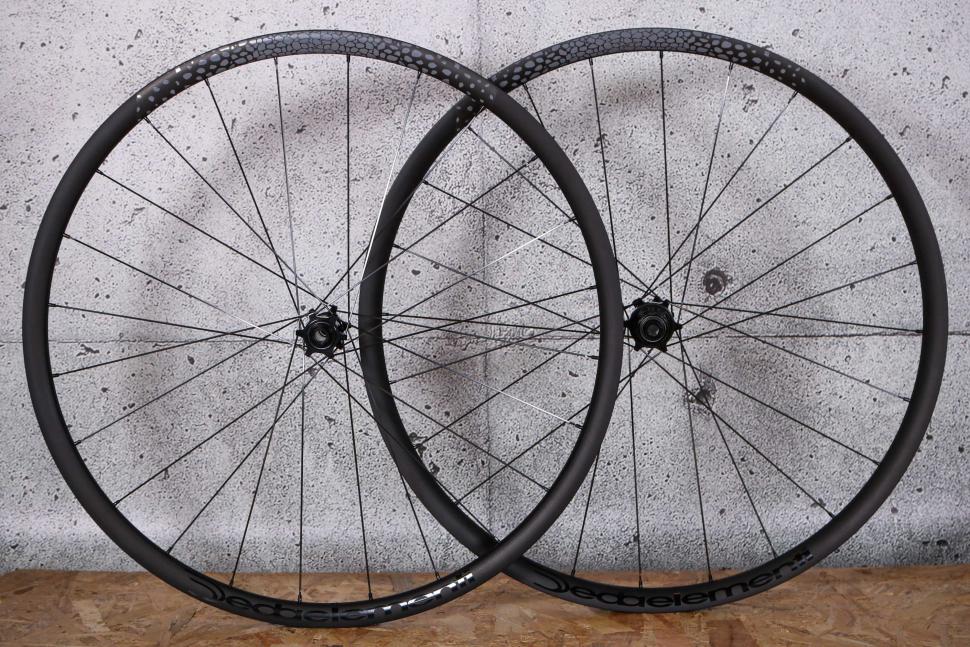