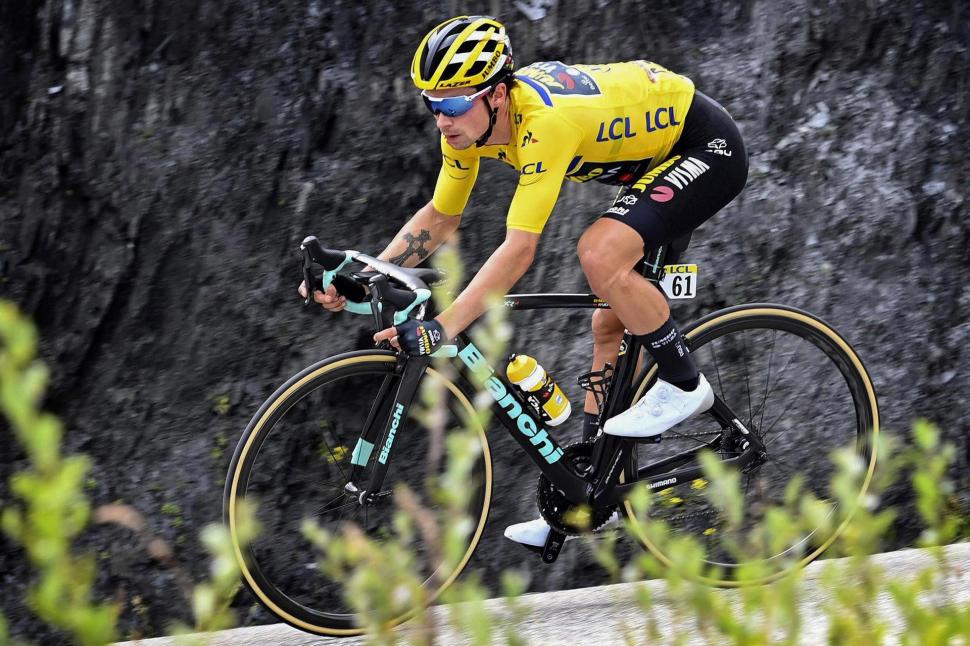 Having ruled the UCI WorldTour over the past few weeks, Jumbo-Visma is among the strongest squads going into the Tour de France and many bookmakers have team leader Primoz Roglic as the race favourite. Here is the Bianchi Oltre XR4 – with a black paint job developed especially for the Tour de France – that the team will be riding over the next three weeks, along with their Aquila CV time trial bike.

All of Jumbo-Visma’s recent wins – and there have been a lot of them – have been achieved on the Bianchi Oltre XR4, suggesting both that the team is in awesome form and that a bike that's positively elderly in World Tour terms can still cut it.

Although the Oltre XR4 is available in a disc brake version with fully internal cable routing, Jumbo-Visma's success has come on the rim brake model where the cables run externally between the handlebar and the head tube and front brake. Jumbo-Visma could use the disc brake model if it wanted, but it chooses not to. More on that in a mo.

Read our review of the Bianchi Oltre XR4 Disc

This bike was released back in 2016. Bear in mind that the typical lifecycle of a top-end race bike is about three years. It's then redesigned or replaced.

It could be that Bianchi was planning to update the Oltre XR4 in 2020 but that everything has been postponed because of the pandemic. It's still possible that a new bike could emerge before the end of the current race season but that's increasingly unlikely. A new model has yet to be added to the UCI's List of Approved Models of Frames and Forks. 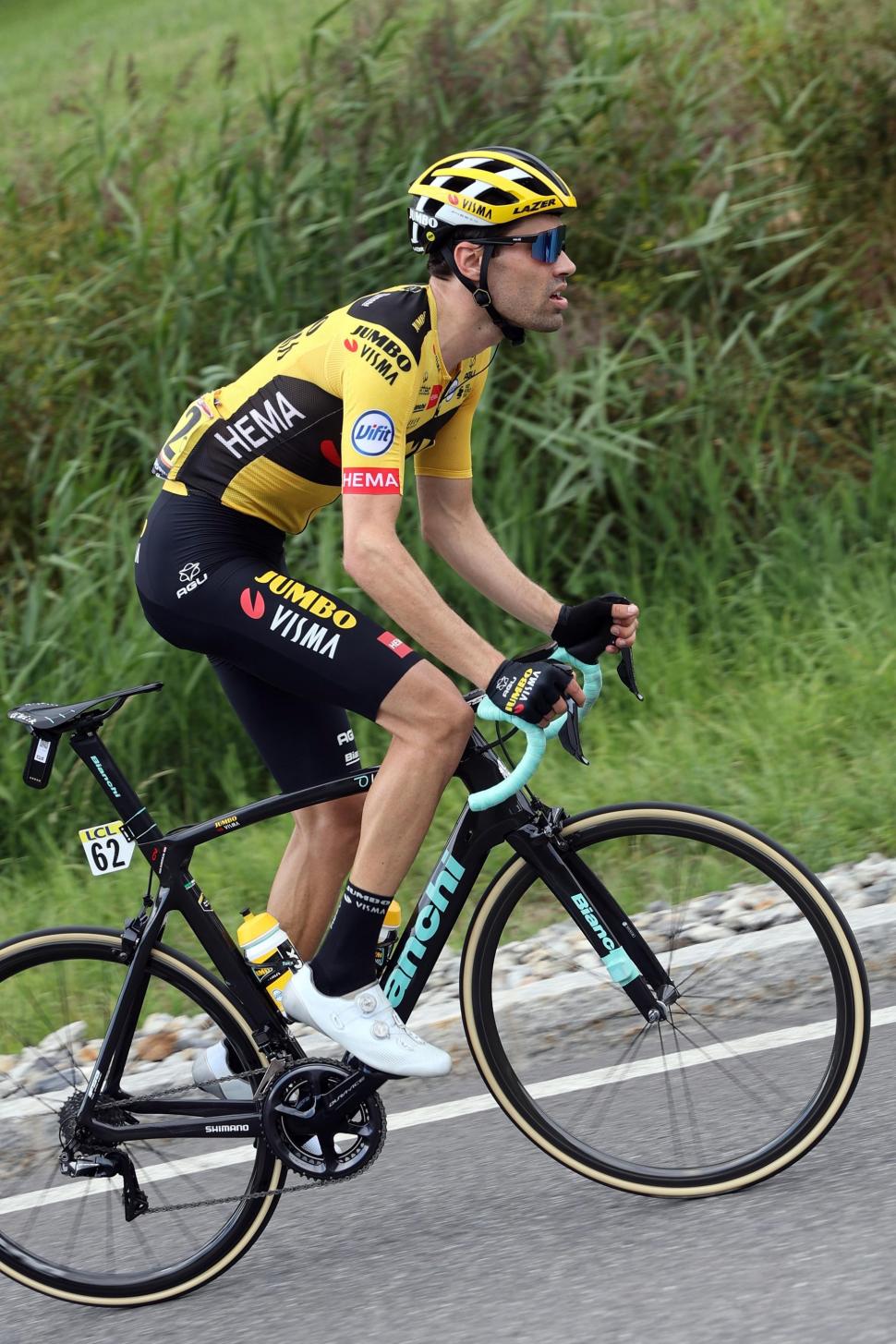 Our guess – we don't know for sure – is that the Oltre XR4 will be revamped or, more likely, an Oltre XR5 (or an entirely new platform) will be released next year.

Read our review of the rim brake Bianchi Oltre XR4

The majority of high-end race bikes released by the big brands in 2021 are disc-brake only. There are no rim brake versions of the Specialized Tarmac SL7, the Trek Émonda SLR, or the Merida Reacto, for example. And having any cables/hoses on display is a rarity these days.

2021 tech trends: how next year's bikes are shaping up – plus emerging cycle tech trends for 2022 Why is Jumbo-Visma using the rim brake Bianchi Oltre XR4 when its riders could be on the disc brake model?

It’s probably down to weight. The Oltre XR4 is a fabulous bike but it isn’t as light as some of the newer aero road bikes out there. Specialized, for example, reckons that it’s new Tarmac SL7 is ultra-aero while being right on the UCI’s 6.8kg minimum limit for racing. 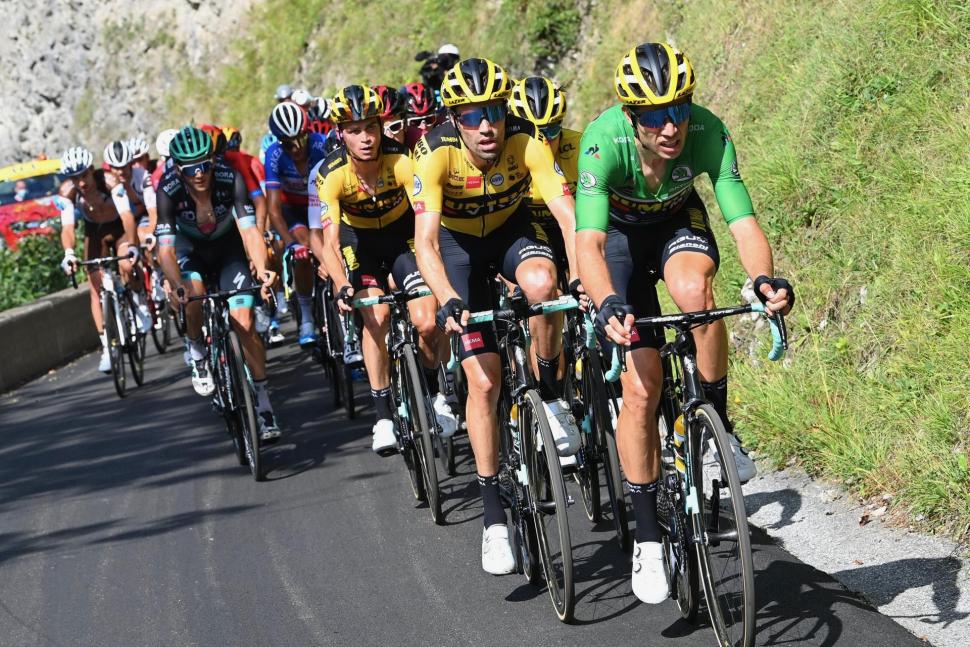 It’s likely that Jumbo-Visma would struggle to get the disc brake version of the Bianchi Oltre XR4 down to that figure, and a little extra weight can make a significant difference in a race like the Tour de France which is usually won and lost in the mountains.

“Specifically for the Tour de France, Bianchi has developed a unique paint system that significantly reduces the molecular weight of the coating used for Team Jumbo-Visma’s Oltre XR4 – delivered in black colour with the iconic celeste Bianchi logos,” says Bianchi. 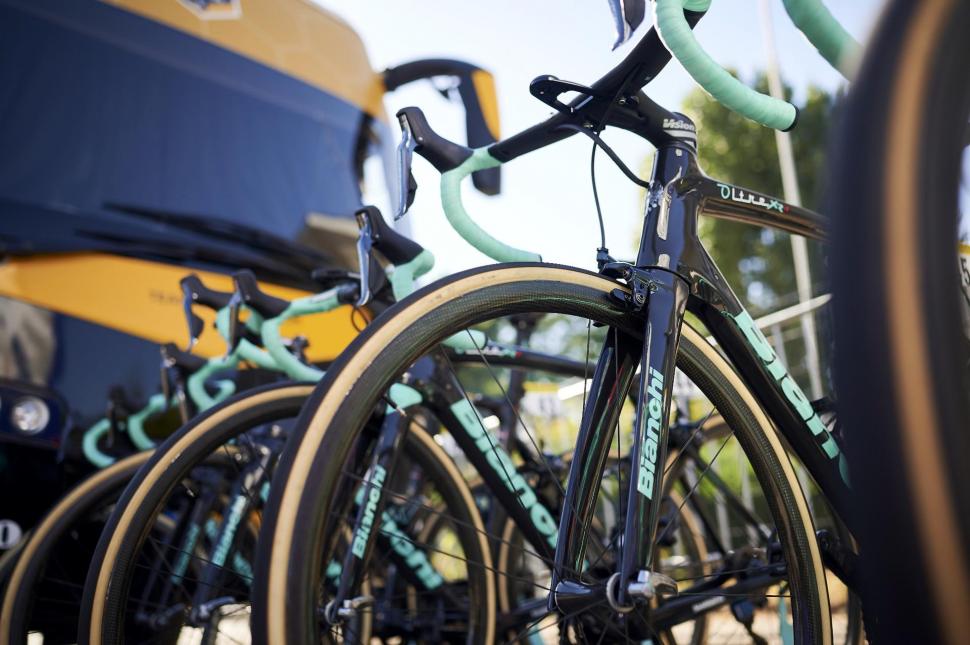 “Thanks to [the] special paint system, Primoz Roglic, Tom Dumoulin and other Team Jumbo-Visma riders selected for the Grand Boucle will be able to save up to 80g on the total weight of the bike.”

The Jumbo-Visma bikes are usually fitted with a Vision Metron 5D or 6D integrated handlebar/stem.

The difference between them is that the tops of the 5D sweep forward from the stem section whereas the 6D is a more conventional design without this forward angle. Combined bar/stems have become ever more popular over the past few years.

Team Jumbo-Visma bikes are fitted with Shimano Dura-Ace Di2 groupset components, including power meters. Like the Bianchi Oltre XR4 frameset, the latest version of Dura-Ace Di2 was unveiled back in 2016 so it's overdue an update. Again, we don't think that revamp will be revealed this year but we'd be surprised – stunned – if it didn't show up in 2021.

The wheels are from Shimano too, although some hubs being used aren't from the current range (there's an unconfirmed rumour that the team uses Corima wheels in the mountains).

There is no team time trial in this year’s Tour de France and there’s only one individual time trial. Even that is pretty unusual.

Stage 20 – the penultimate stage – is a 36km (20-mile) time trial from Lure to La Place des Belles Filles. It’s a summit finish at the end of a 5.9km climb that averages 8.5%. It’ll be interesting to see what bike (or bikes) each rider uses.

Jumbo-Visma will use Bianchi’s Aquila CV time trial bike, at least until the start of the climb. 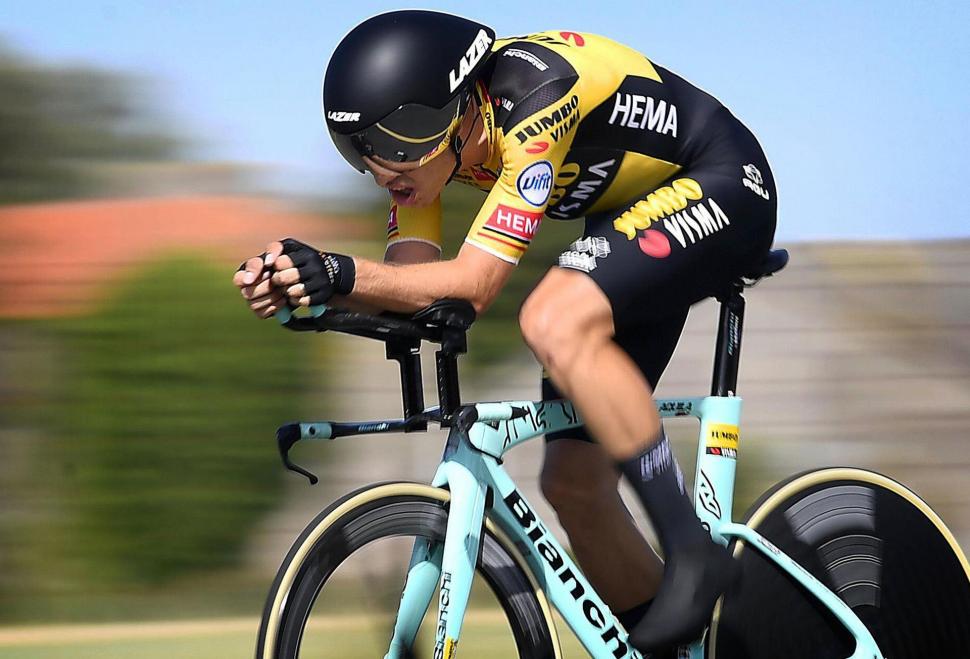 The CV refers to what Bianchi calls its uses Countervail vibration cancelling composite technology, which also features on other bikes in Bianchi's range, including the Oltre XR4.

“Developed for NASA by the Materials Sciences Corporation, Countervail is a composite-material system that combines viscoelastic carbon material within a unique fibre preform to cancel road vibrations and reduce turbulences in the frame that can affect its performance,” says Bianchi.

Everyone knows how much the bike industry loves a reference to space technology and NASA counts double!

Get the details on Countervail technology here

Many brands truncate the tube profiles – they effectively get rid of the long, tapering trailing edges and chop them off square instead, the idea being that you get virtually the same aero benefit with less material. Bianchi haven’t done this; they’ve kept the trailing edges in place.

The Aquila is made with deep-section tubing and features a fork crown and stem that integrate into the frame – neither increases the size of the bike’s frontal area. The seatstays are dropped, joining the seat tube well below the top of the rear wheel in order to reduce drag.

The Aquila uses rim brakes, but not standard callipers. Instead, there’s a V-brake incorporated into the front fork while the rear brake is positioned behind the bottom bracket.

Like the frame, the base bar uses a NACA airfoil profile.