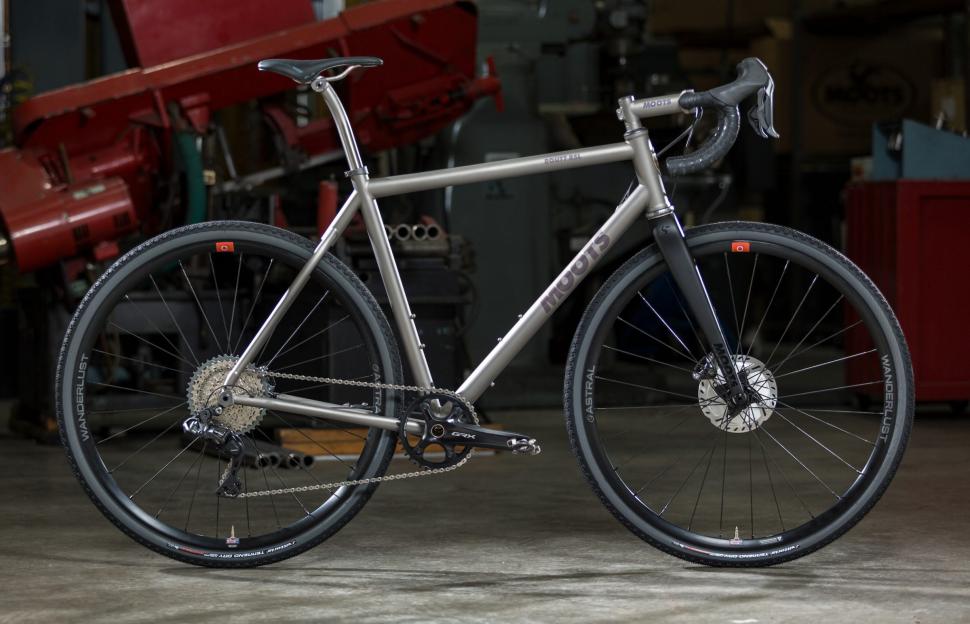 American titanium frame specialists Moots has unveiled three updated gravel bikes for the racer to the adventurer. The Routt RSL, 45 and YBB all get the slacker head angle and wider tyre treatment for better handling while maintaining chainstay length to keep things nimble. That’s the claim, anyway.

Moots says that the aim was to make their gravel bikes more stable at speed with the changes that they’ve made, Moots hopes, putting them in the “super-stable, super confidence-inspiring situation.”

The main factor influencing this, Moots says, is the positioning of the chainrings and cranks which, on gravel-specific groupsets like Shimano’s GRX and Sram’s Force AXS, is placed further outboard. This allows frame designers to get the extra tyre clearance that they wanted.

Shorter stems and wider bars have been used across the size ranges of all three bikes to further increase stability.

Up from a maximum of 38mm, the 45mm tyre clearance is a big change, opening up the bike to a much wider range of surfaces than the old version. Moots says that the Routt 45 is designed for adventure and versatility, sticking with the slightly more relaxed geometry when compared to the RSL. A small tech highlight can be found at the rear end. Moots says that “perfect rear wheel and brake alignment come courtesy of the proprietary 6/4 titanium 3D-printed flat-mount disc mount.” It's a small detail, but one that we really like. At the adventure end of the range is the YBB with its “softail” micro-suspension unit in the rear end offering just over 20mm of travel. This, Moots says, “takes the edge off backcountry road and trail chatter, to provide supremely smooth confident, and pleasurable pedalling experiences.”

All three new models are available to order now with set builds and custom options, though you'll need deep pockets with prices starting at $4,560 for a Routt 45 frameset and only going up.