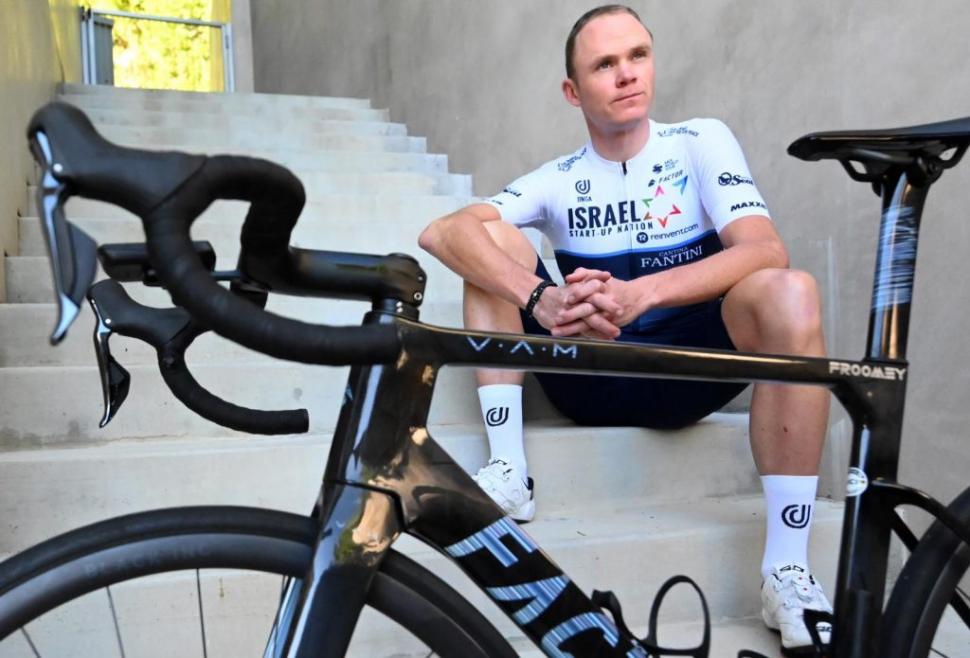 Chris Froome isn’t the convert to disc brakes that many pro riders are and he looks to have taken one more step in an attempt to stop the annoying rotor noise that can follow a long period of heavy braking.

Back in February, Froome said that he wasn't "100 per cent sold" on disc brakes despite having used them for a couple of months when talking to his YouTube followers about the Factor Ostro VAM that his Israel Start-Up Nation (ISUN) team uses. In the refreshingly honest review, Froome also said that while performance in both the wet and dry impressed him, he suggested that he had concerns over rubbing, overheating and the potential for rotors becoming warped.

> "I don't think the technology is quite where it needs to be": Chris Froome unconvinced by disc brakes

On the horribly hard double Ventoux stage on Saturday, Froome was spotted using what we think is Magura’s MT8 SL FM. This two-piston flat-mount calliper is identifiable by the red ring seen on the body of the brake. While we believe the calliper to be the MT8 SL FM - it’s the premium flat-mount in the Magura range - the lack of detail in the photo means that we can’t take a close enough look to confirm our suspicions.

The question really isn’t about what brake the ISUN mechanics have fitted, but why Froome wants it fitted. From what Froome has said about disc brakes in the past, we believe that the answer to that centres on heat dissipation and long descents.

When a rider such as Froome heads down a long descent, there are going to be numerous times where heavy braking is required due to the high speeds and twisting nature of the road. Hard braking can cause heat to build on the rotor and also within the brake calliper. In here, the heat can cause the pistons to expand slightly and this prevents the brake pads from returning to their ‘off’ position.

This is when you will get the annoying noise as the brake pad is still slightly contacting the rotor. Dirt and brake dust can also be burnt onto the wall of the piston, further enhancing the issue.

So does the use of (what we think are) the Magura callipers solve this issue? We haven’t reviewed the MT8 SL FM, or used any other Magura callipers with Shimano road levers, so we can’t say either way; but with Froome being given the green light to use rim brakes should he wish, the set-up must be good enough to keep him on discs.