Rim brakes are cool, ok? We’re glad you agree. Tonight we’re looking back to the 2017 Men’s Junior Cyclocross World Championships. Niche, we know, but it is a race that British cyclocross fans will recall as the moment that Tom Pidcock really made a name for himself.

Enough about the race, we are here to look at his bike. It’s a good one too, full of interesting tech details. The Milnes bike that Pidcock rode is a resprayed Ridley X-Night SL. The frame and fork are carbon and Pidcock rode a specially-painted European’s Champion bike, representing his win in that competition earlier that season.

The X-Night is a relatively classic cyclocross design with a tiny head tube for a low front-end, a straight top tube to give the clearance in the front triangle for easy shouldering and a geometry that gives the bike snappy handling on those technical European courses. The groupset is an interesting look back to when 1X drivetrains were becoming very popular with SRAM-sponsored pros, but Shimano users had to make do with throwing something together. 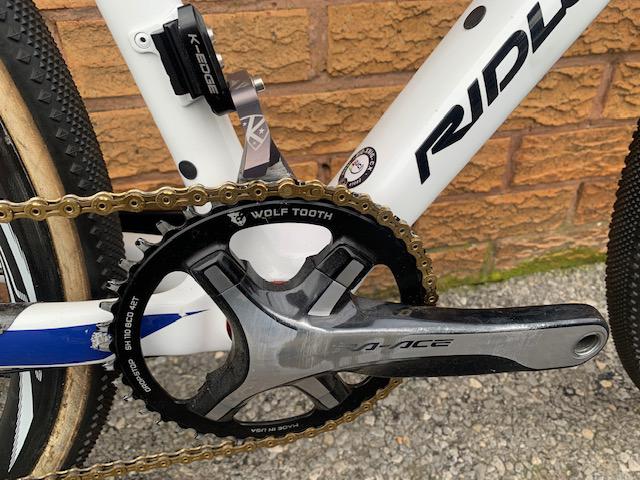 Pidcock opts for Shimano Dura-Ace 9000 parts for 1x11 mechanical drivetrain. This includes the rear derailleur, shifters and cranks, but sticks with an Ultegra cassette with a decent 11-32T spread. This is mated to a WolfTooth 1X 42T chainring. Note just how much abuse cyclocross puts on components with the cranks having seen plenty of heel rub. A K-Edge chain catcher ensures that the chain remains in place.

> 4 ways to get better at cyclocross

A Ceramic Speed frame sticker suggests that the bike has some hidden upgrades and we’d expect those to be found down at the jockey wheels, though these are pictured. A gold KMC chain connects everything and that bit of bling is matched with the gold headset spacers and top cap. The brakes are badged up with the Forza logo, but they are in fact Avid Shorty Ultimates, widely regarded as the pinnacle of cantilever performance. Mounted in the brake shoes are what look to be SwissStop BlackPrince brake pads, but we could be wrong.

Cantilever brakes, especially when used with carbon wheels, hardly provided much braking power, but when you have the top-level cyclocross skills of Pidcock, it isn’t really a problem. In fact, rim brakes often result in better handling skills as the rider is forced to be extra careful about their line choice.

> Complete guide to cyclocross - get into the muddiest racing

When using cantilever brakes, attention has to be paid to reducing friction in the system and the Milnes mechanics have done just that, cutting the brake housing to the perfect length. This gives the rider the smoothest possible brakes and helps eke out every bit of power. Tyre tread patterns and the tyre pressure are often the most important, and hotly debated component choice on race day and for the World Championships, where this bike was used, Pidcock made a last-minute change to Challenge Dune Team Edition tyres. This file-tread pattern is usually, as the name implies, reserved for the sandy races.

> Beginner's guide to cyclocross - get muddy, get fit (and get a new bike)

The race took place in icy conditions. Yes, they race cyclocross on ice and snow and just about anything else. And no, there isn’t much grip to be found on ice. Pidcock went with the tyre that gave him the biggest contact patch on the frozen ground, maximising this with just 12psi in the 33mm tubulars. 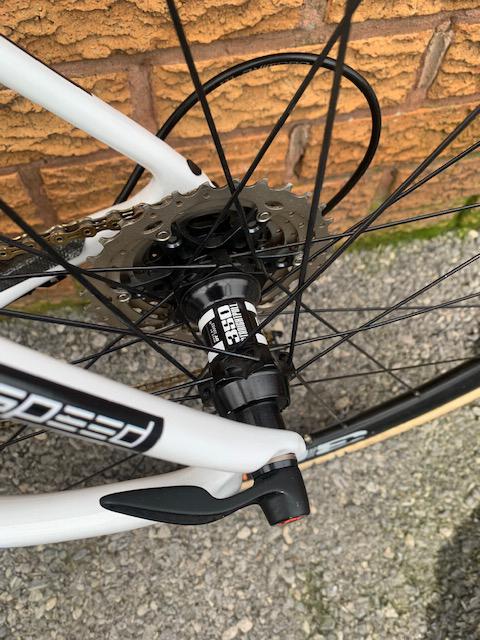 Those tyres are mounted on Forza T30 carbon tubular wheels. These spin on DT Swiss 350 hubs. A WheelsMFG PF30 to Outboard 24 bottom bracket houses ceramic bearings. Forza provides the finishing kit with a carbon seat post along with aluminium 100mm stem and 380mm bar. The saddle is also from Forza.

You can still buy these bikes. PaulMilnesCycles.com is where you need to head.