The Diamante SV has been redesigned with compliance in mind. Basso’s race bike now comes with a slight more relaxed geometry too.
by Liam Cahill

Basso has launched a heavily changed 2021 Diamante SV that features a revised geometry and larger tyre clearance for a more compliant ride that Basso says also makes the bike faster on rough roads. Basso claims that there is also an aero boost with the new frame thanks to the OpenFlow fork design.

Jack reviewed the old model, which still had exposed cables and rim brakes in early March and while he loved the ride quality, he did note that the bike felt a little dated when compared with the competition. For 2021 Basso is looking to put that right with a completely overhauled design that ditches the rim brakes in favour of a disc-only platform. Basso says that the idea behind the Diamante SV remains, with speed being the ultimate goal, but it has added compliance into the frame and eased the geometry.

Basso claims that each frame comes with size-specific tube shapes and carbon layup to maintain the same ride quality across the size range. 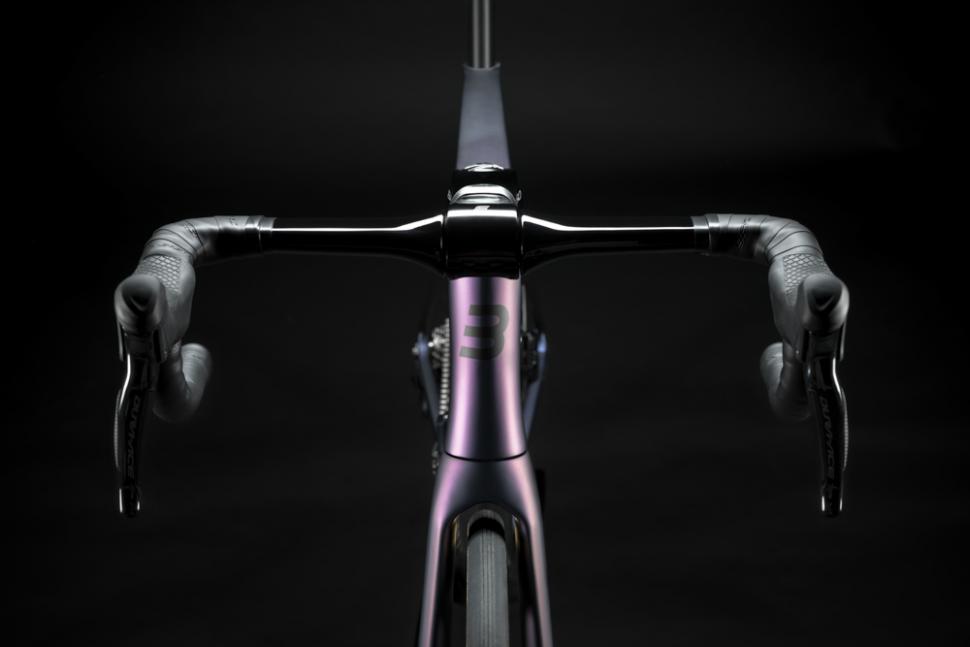 Starting at the front end, it will come as no surprise to see this 2021 aero race bike get proper front end integration with all cables hidden from the wind.

Basso is keeping the Diamante right in line with its competitors, but unlike some of its rivals, Basso doesn’t say how many watts this will save you, the rider. They simply say that the cockpit is “extremely aerodynamic.”

“The seamless connection between bar, stem and frame, with each being optimised aerodynamically as a cohesive unit makes for aerodynamic form and performance design.”

The brake cables and any gear wires run fully internally through a newly designed bar and stem before passing through the upper headset bearing in front of the steerer tube.

The bar and stem, despite the seriously slick appearance, are two separate components, allowing you more position adjustment options. 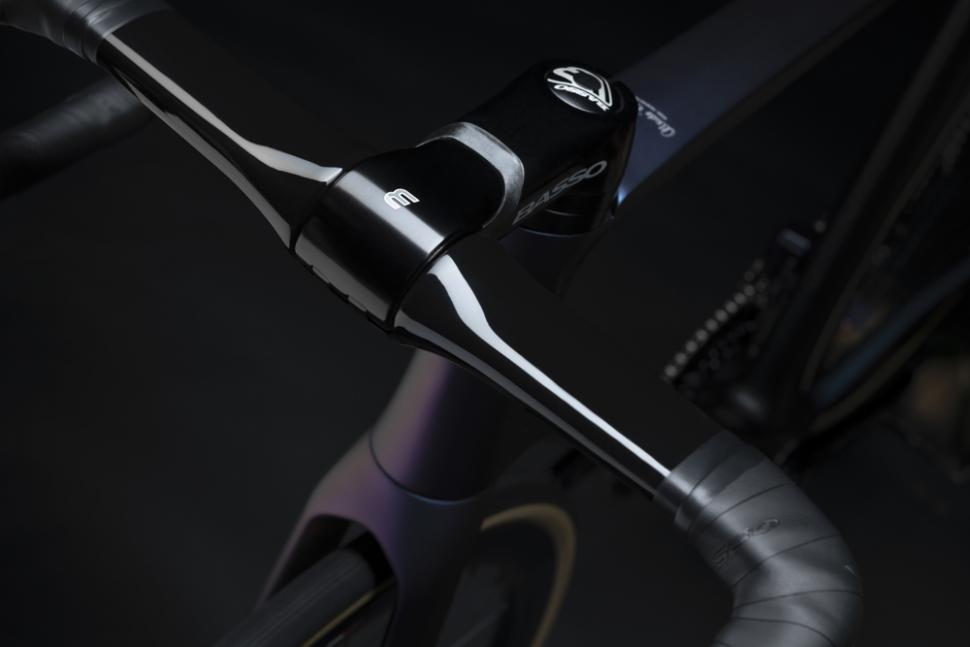 Basso has used interlocking semi-circle spacers to make position changes achievable without the need to disconnect the brakes.

Despite the front end integration, the Diamante SV is compatible with both mechanical and electronic shifting.

One of the more noticeable features comes at the fork crown area which sits quite far in front of the headtube. This is as much of a geometry design as it is for drag reduction but we’ll focus on the latter for now. Basso is calling the large space around the rim and tyre ‘OpenFlow’ and claims that the wider space around the rim and tyre creates “a smaller aerodynamic footprint and increased airflow.” 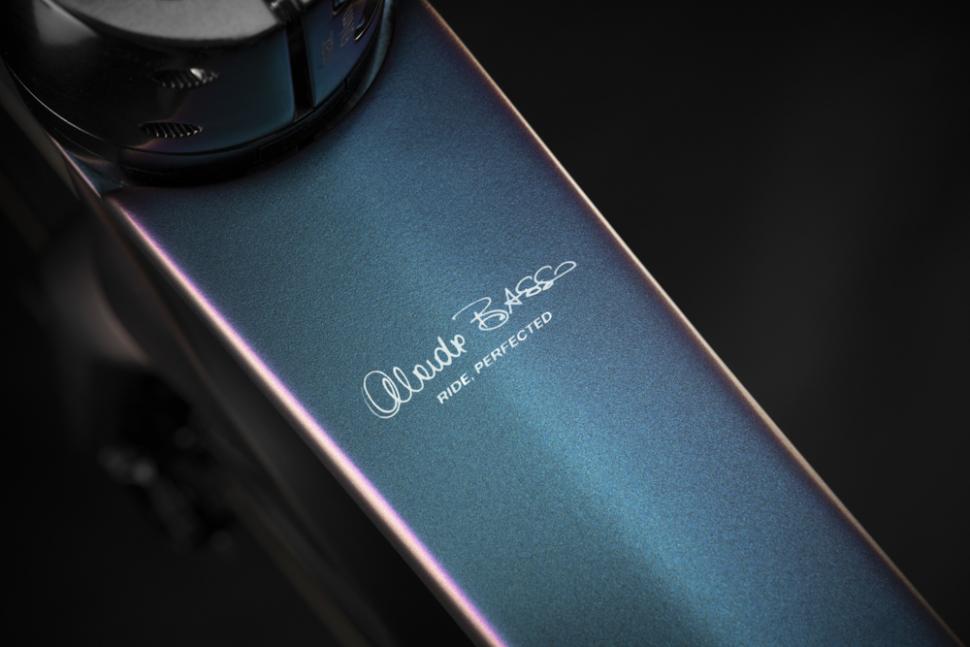 Basso says that even the paint has been aero optimised. “Thanks to the 3D structure of the ceramic nano particles the paintwork becomes less porous and more compact, making the resulting surface more uniform and less prone to drag.”

Compliance at the heart of the geometry

Compared to the old model, the new Diamante SV is visibly slacker with a taller head tube and shorter reach. It couldn’t really get any longer or lower, Jack’s review highlighted that the old model was more aggressive than both the Cervelo S5 and the Specialized Venge. 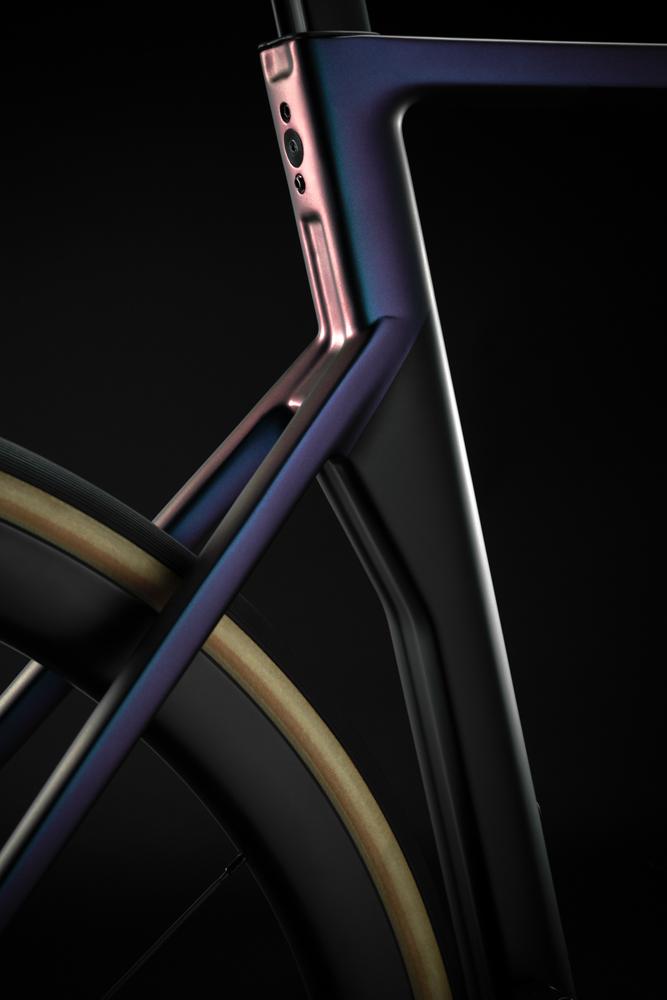 To add to the compliance, Basso has made space for 32mm tyres. This move, they claim, also helps to make the bike faster on normal roads where the tarmac isn’t always perfect.

“The engineering staff at Basso worked diligently to create a fast, extremely agile platform that could perform over a wider range of surfaces. Specific speed or rather speed that can be applied only on certain, perfect terrain is useful…versatile speed, however, is paramount.”

Basso says that the increase in tyre clearance also allows you to take advantage of increased grip.

The new Diamante SV comes in seven sizes from 48 to 63. We're still awaiting a UK price and availability dates.

1
Police officer caught on camera telling cyclists to ride in single file to be given "education around traffic offences"
2
Why was Mark Cavendish riding with Lance Armstrong this week?
3
Near Miss of the Day 827: Bus driver “bullies his way into a gap that was never there”.
4
‘Dangerous cycling is not a priority,’ police force says
5
Cyclist bitten by dog… and then abused by owner
6
Five-year-old boy killed after van driver knocks him off bike
7
Want the “fastest socks on the planet”? They’re yours for €1,000 + more tech news from Campagnolo, Rapha, Van Nicholas...
8
Mathieu van der Poel fined A$1,500 after pleading guilty to assault after hotel incident