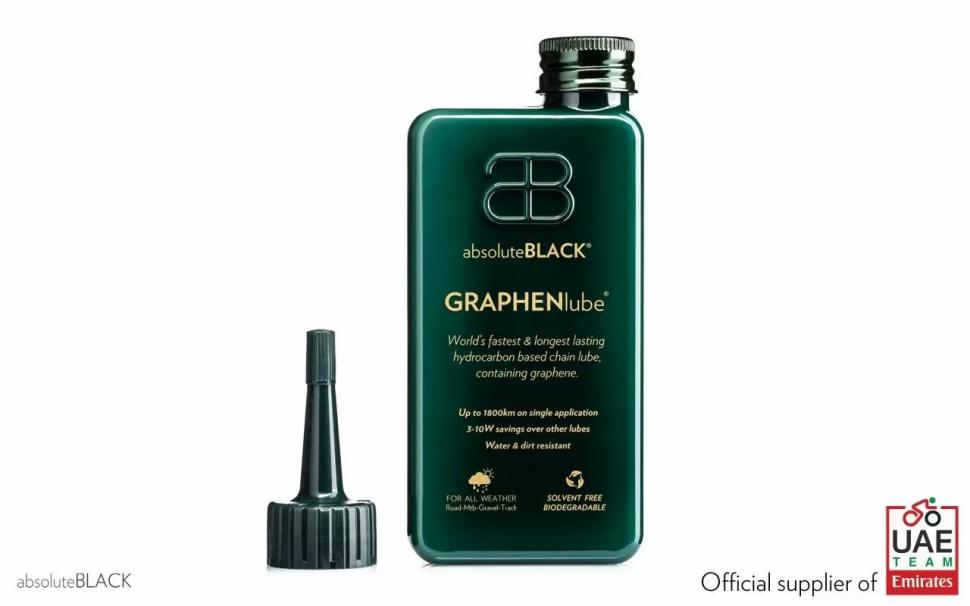 AbsoluteBlack launches GrapheneLube, claiming “sub five watts of frictional loss over 900kms” …it's not cheap though

AbsoluteBlack, designers of chainrings and other drivetrain parts, have launched what they claim is the “world’s first hydrocarbon-based chain lubricant containing graphene.” They’re promising “Up to 1800km on single application” along with “3-10W savings over other lubes.”

Tired of applying chainlube once or twice a week? Want yours to last 1800km? Well, AbsoluteBlack says the new GrapheneLube does exactly that. While it is an impressive claim, AbsoluteBlack recommend re-lubing “every 600km or sooner in dry conditions and after every wet ride.” Best save this for dry weather then. 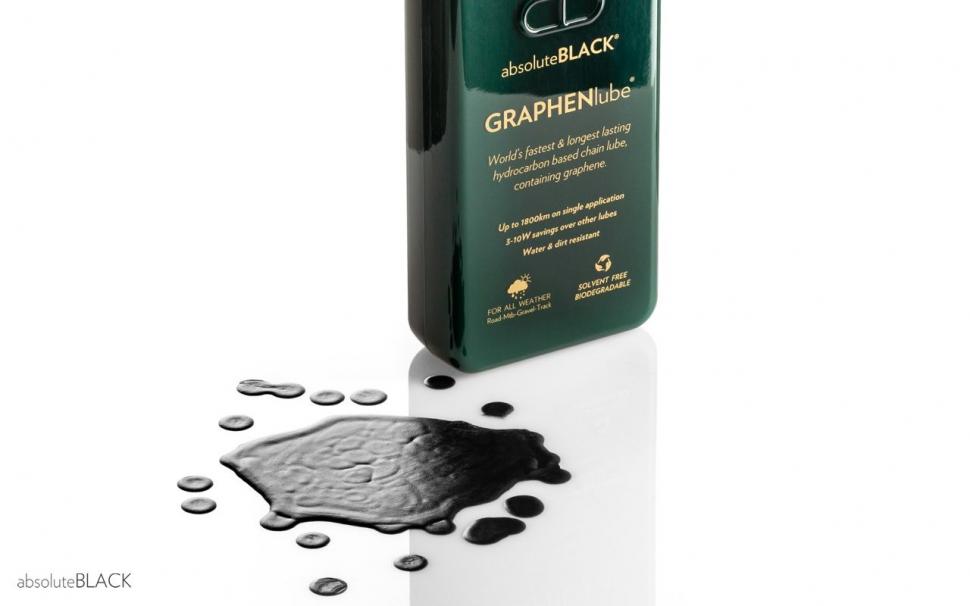 Their new GrapheneLube claims one of, if not the, longest service life from a single application at a staggering 1800km. This “wax-based water emulsion” contains a “special mix of high-purity graphene” without any harmful substances. This, AbsoluteBlack claims, results in a chain lube at is “able to hold sub 5 watts of frictional loss over 900km on a single application” while also protecting the chain from water and not attracting dirt.

Read more: Should you get wet or dry lube?

We’ve seen graphene used in tyres, and what was touted as the ‘new carbon’ in the world of bikes has found its way into chain lube. As this study from 2014 showed, Graphene is "very effective for friction and wear reduction", though AbsoluteBlack says that it “is still not commonly used because of its incredibly high cost”, but that there are several advantages to using it for chain lube.

Firstly, AbsoluteBlack claims, “it has extremely low friction coefficient in all the environments” which is rather handy when you’re trying to reduce wattage losses. It is also apparently “far stronger than any known material to a man and it can cling to metal, protecting friction surfaces from excessive abrasion.”

“Moreover, it repels the water and is not permeable to air reducing, therefore, oxidative stress on the metal surface. Even a single atom layer is enough to reduce the friction considerably.”

AbsoluteBlack says that the chain lube has been in development for two years, resulting in “a lubricant that on a single application will hold sub 5 Watts of frictional losses over 900km distance.” AbsoluteBlack says that independent testing “reveals how lubricant and its friction changes over driven kilometres on a single lubricant application.” The test involved chains being prepared by Zero Friction Cycling and then sent to Wheel Energy Company who conducted a “friction test at 250W resistance, 100rpm cadence, 40km/h speed, 25deg C and 25% humidity.”

The test was run until each chain reached 10W losses. This, according to the lab testing, took AbsoluteBlack’s GrapheneLube 3200km.

AbsoluteBlack says: "This test reveals how lubricant and its friction changes over driven kilometres on a single lubricant application. The higher the number the more Watts you are losing. With “wet/semi-wet” lubes friction first decreases because chain gets drier and therefore stiction (static friction) decreases. Until it reaches more or less dry state – the friction then increases due to starvation of lubricant and abrasion. For “dry” lubes/films, stiction is already minimal, so they will only increase in friction due to coating wearing out.”

The key to getting the maximum out of your new GrapheneLube, AbsoluteBlack state, is in the preparation of your chain. You’ll need to remove your chain and immerse it in a solvent like white spirit (that eco-friendly stuff), before letting the chain dry completely. The chain then needs to be left to soak in the GrapheneLube for up to 30 minutes while you move the chain slightly to articulate the links. AbsoluteBlack sends you bags for this. The chain needs to then be dried completely, ideally overnight, before being reinstalled. It’s a process that will be familiar to anyone who has waxed a chain before.

As the video shows, the lubricant that is not left on the chain can be reused, though it's not clear how many applications you'll get from one bottle.

1
Five cool things coming soon (but on a budget) from Vittoria, Decathlon, Topeak, Hutchinson and Formbeat
2
Cannondale unveils new SuperSix EVO Leichtbau with a mega-light 750g frame
3
Near Miss of the Day 812: Van driver hits cyclist during impatient overtake on country lane
4
Pro cyclist no longer rides alone after two 'bikejacking' attempts as violent incidents increase
5
Cyclist driven into by Range Rover driver blasts "victim-blaming twaddle" from police who initially refused to take action
6
Commonwealth Games marshal verbally abused by cyclists and motorists for enforcing road closures
7
Near Miss of the Day 811: Van driver pushes cyclist against kerb
8
Near Miss of the Day 809: “Just doesn’t get closer than this” – Cyclist squeezed between van and kerb at bike lane pinch point