Whoop Katie Recovery ROUND 4 With Branding@2x

What did it take for Katie Archibald to dominate the UCI Track Champions League?

The Scottish rider was 87% recovered heading into the second day of racing at the London Olympic velodrome, Whoop’s data reveals.. How did she claim such a convincing victory?
by Anna Marie Hughes

Double Olympic gold medallist Katie Archibald was crowned the women’s endurance champion in the inaugural UCI Track Champions League after a dominating performance across round three and four at London’s Lee Valley velodrome on Friday and Saturday. What did it take to claim such a convincing victory? Whoop collected some interesting data at the events which provide an insight into how hard the racing was and the recovery Katie needed to perform at her best two days in a row…

The 27-year-old Scot won the elimination race on Friday and secured her victory with second place in Saturday's scratch race, lifting the trophy in front of the British audience on the Saturday night at London’s Olympic velodrome.

Katie was wearing a Whoop band throughout rounds three and four in London, so the fitness and health tracking brand was able to capture some insights into the rigours in completing two back-to-back days of intense track racing with data on recovery, strain and heart rate.

How hard was the first day's racing?

Katie raced two events during Friday’s round three, the elimination and scratch race, which pushed her day strain up to 16.8, having burnt 3,164 calories and pushing her heart rate up to a peak of 196bpm in the scratch race. You can see from the two graphs below which depict Katie’s heart rate across each event, how the races really build up. 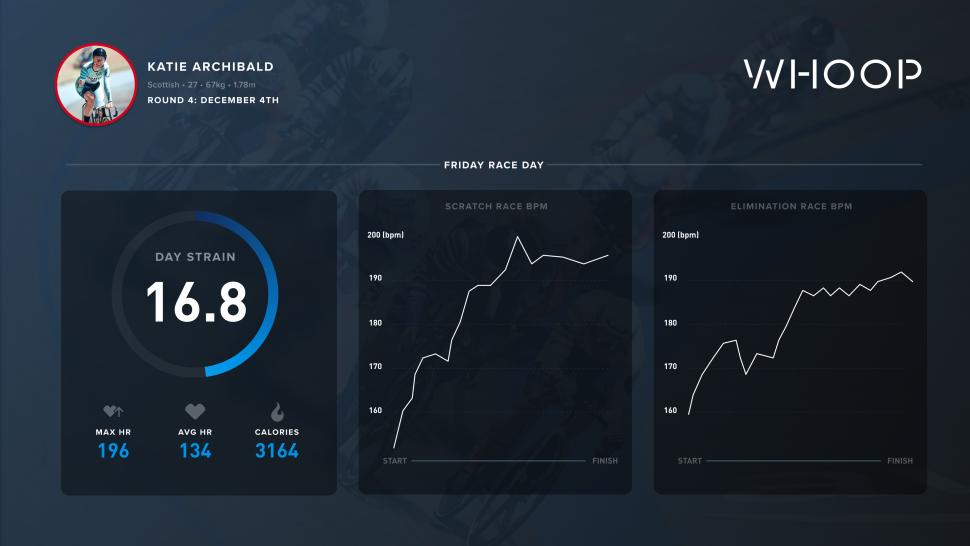 Quantified on a scale from zero to 21, 'strain' is Whoop’s measure of the cardiovascular load your body takes on over the course of a day or during a given activity, and is calculated on personalised exertion. Katie’s 16.8 score is fairly high, although by no means the biggest strain to recover from with just one night’s rest. The Whoop data recorded at this year's Tour de France showed EF riders regularly hitting a day strain between 20.4 and 20.6. With the much shorter format of endurance racing on the track compared to a Tour de France stage this significant difference is to be expected.

How recovered was Katie?

Now, we’re going to take a look at how much recovery Katie was able to pack in before each night's racing, according to Whoop’s scaling system.

Recovery is a personalised measure of how ready your body is to take on strain each day, Whoop explains. It’s calculated based on four physiological markers: heart rate variability (HRV), resting heart rate (RHR), respiratory rate (RPM), and sleep. Because these metrics are calibrated to your baseline, recovery is personalised each day.

Whoop provides a daily recovery score out of 100% that matches up to an optimal level of strain for optimal performance. Green is very good of course, and you’ll hit that if you get between 67 and 100%. At 34% to 66% it's Yellow, and you’ll really want to avoid Red where you can which is for 33% and below.

Katie was in the green for two days before round three, and then she managed to get a whopping 96% recovery in on Thursday before storming to the win on Friday in the elimination race.

Whoop’s recovery score for Saturday then takes into account the amount of sleep she needed to counterbalance the 16.8 day strain effort she put in during round three. She was able to get some quality sleep before Saturday, and with 87% recovery that was enough to pick up a second place in the scratch race on Saturday’s meet, and the last points she needed to claim the title of women’s endurance champion.

It’s interesting to see that 96% recovered was enough to pick up a victory on the first day of intense racing, and 87% was good enough for a second place on the second day. Obviously Katie’s tactics, as well as the tactics of the competitors and their own recovery efficiency, comes into it too.