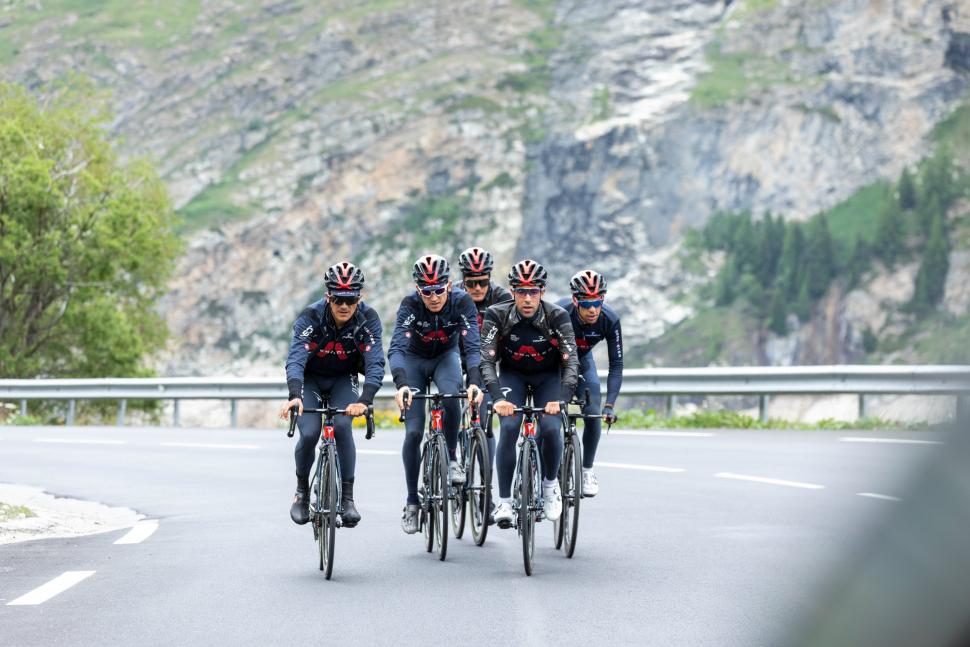 What do pro riders do on Tour de France rest days?

Here's what the pro riders get up to when they're not racing...
by Anna Marie Hughes

“No such thing as a rest day,” Team Qhubeka NextHash tweeted. That’s right, after suffering in the mountains the riders might get a well-deserved day off from the racing itself, but you can’t get the pro riders off their bikes.

No such thing as a rest day! #BicyclesChangeLives 🖐️ pic.twitter.com/tWFOVcobFa

Pro riders are packing in active recovery rides to stretch out their legs, but it’s not just that on the rest day ‘to-do list’. Refuelling, scouting out the next stage, dealing with journalists, sponsor duties, a lot is going on. Okay, there are lie-ins and massages to enjoy too, but rest days aren’t just a full day of relaxing and lazing about.

That said, there is still a significant reduction in the intensity and the volume that day... because all the other days are even crazier!

Let’s take a look at how much easier the pro riders took the rest day and how much recovery they needed.

The EF Education Nippo team have partnered with Whoop for insights into personalised biometrics including heart rate variability, resting heart rate, respiratory rate and sleep performance, to optimise recovery for each rider in the team. 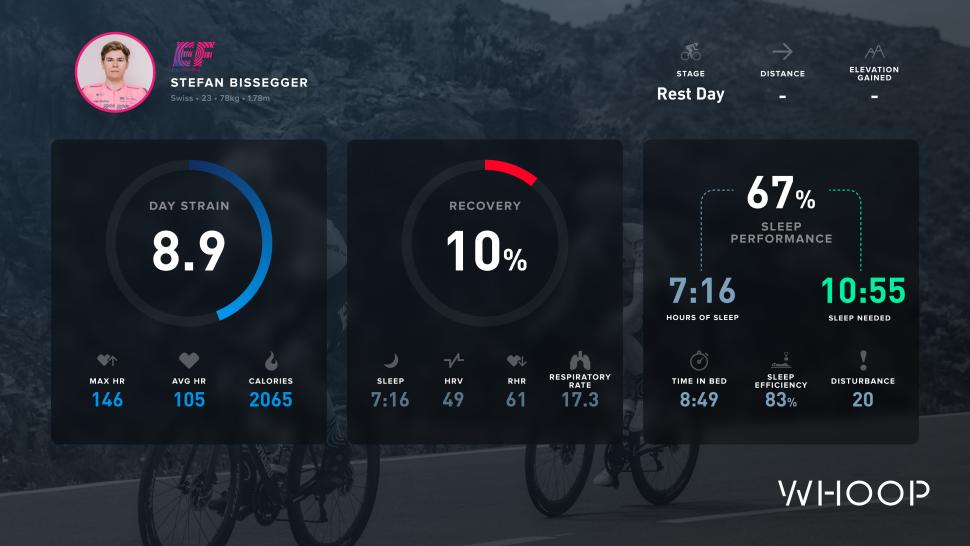 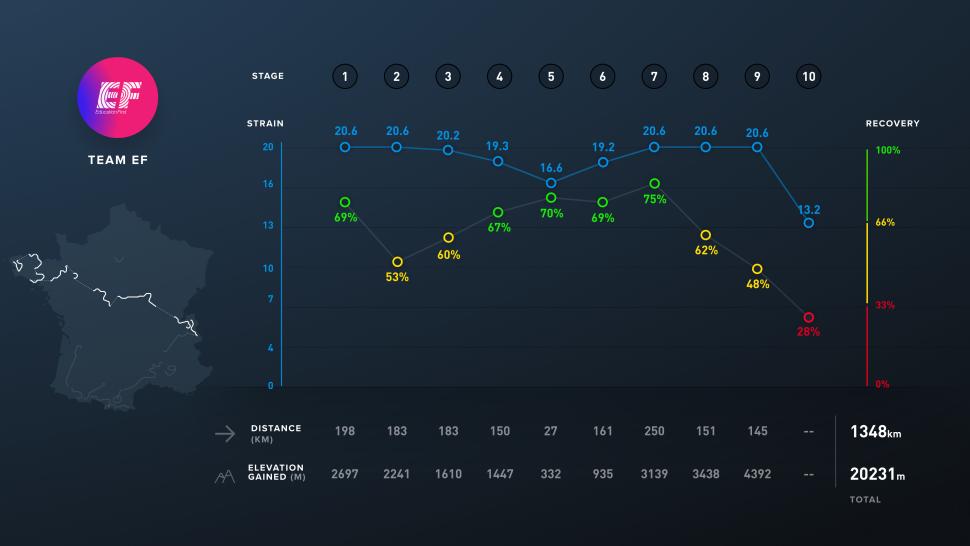 This graph above shows the data Whoop collection for the EF Education team across the first nine stages of the Tour and into day 10, the rest day.

Looking at the blue top line first, the day strain was really high – day strain is on a scale from zero to 21, and it measures the total cardiovascular load experienced across the day – hitting over 20 for six of the stages, all of which had over 1,600 metres of climbing, whereas on the recovery day this dropped down significantly to 13.2.

Now taking a look at the recovery percentage, after accumulating 546km with 10,969 metres of climbing in the legs across the three days before the rest day, that red 28% on the day off racing says it all—that recovery day was definitely needed.

To dip to that lower day strain doesn't mean not riding at all though. To spin out the legs, the Jumbo-Visma lads for example headed out for a two-hour ride in Tignes on 5 July for the first rest day of 2021’s Tour. Wout van Aert clocked an average speed of 33.5km/h (20.8mph) for a 42km (26 mile) spin with 474m of climbing. 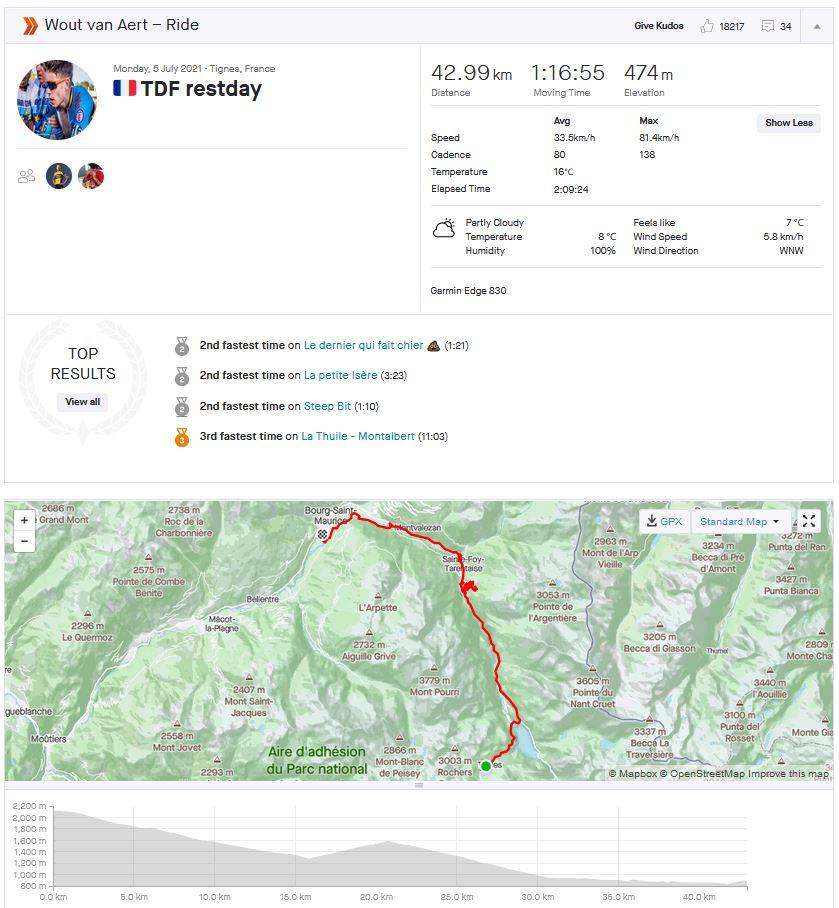 Teammate Mike Teunissen uploaded his ride to Strava too but in his case complete with heart rate data and power readings. Across the ride, he had an average heart rate of 82bpm and a max of 118bpm. He averaged 130 watts, with one 20 minute block sitting around the 235-watt mark.

“What’s the furthest you’ve ridden on a ‘Rest Day’?,” Ineos Grenadiers tweeted, along with pictures of the team heading out for their ride.

What's the furthest you've ridden on a 'Rest Day'?

A ride out for the guys this morning in Tignes. Keeping those legs turning #TDF2021 pic.twitter.com/iuUiXxsVwo

A better question might have been, “what’s the most climbing you’ve packed into on a rest day ride” though, as Dylan van Baarle squeezed around 600 metres into his 24km (15 miles). 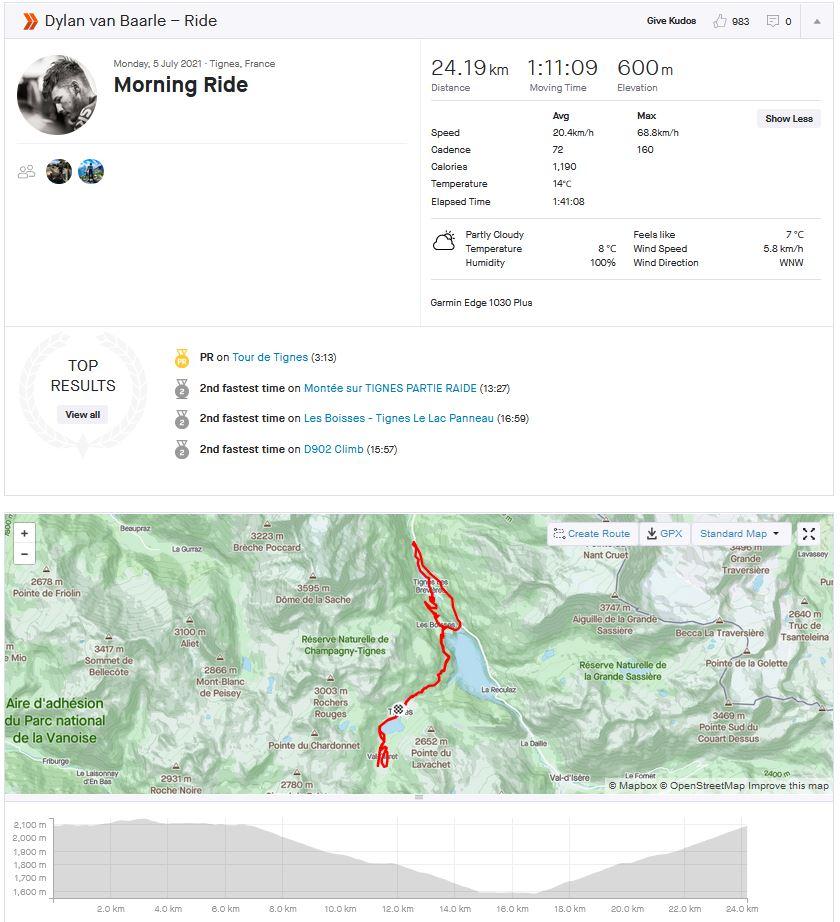 Standard #TDF2021 rest day:
Lie in 😴
Spin with the boys 😎
Record Watts Occurring with Luke 🎙
Snooze 💤
Dinner 🍚
Bed 🛌
Back at it tomorrow 💪 pic.twitter.com/BWngqeJxaS

And he had another snooze after recording his Watts Occurring podcast with Ineos teammate Luke Rowe.

The riders are also having fun testing unreleased shiny kit from their sponsors while stretching their legs on the bike.

(There’s no point trying to look out for these wheels in the Tour de France peloton though as UCI regulations do not permit their use in group competition.)

Physical as well as mental recovery is needed though, and food can play a role in both of these areas.

The day before the rest day the Trek-Segafredo team were treated to burgers and chips, “tour style, of course” as a rest day tradition.

They nommed a healthy version, consisting of fresh bread, meat with 5% fat, fresh tomatoes, avocado and low-fat cheese, with some salad and roast potato on the side.

Also notably, instead of mayo, ketchup or regular sauce they had beetroot mousse as studies have shown that beetroot has the potential to reduce muscle pain and inflammation if eaten post-workout.

“It’s feeding their body after a hard day and also giving them something for the mind is quite important,” the team’s chef shared in a video on Twitter.

Then there are sponsor shout-out duties to do too, showing you’re putting released sponsored products to good use.

This time Israel Start-Up Nation’s Michael Woods was filmed having SpiderTech's kinesiology tape applied to his legs for aiding recovery.

"To have @SpiderTech as a sponsor is such an advantage for us!"

Find out how @rusty_woods is recovering from the last two hard days in the mountains on the first rest day of #TDF2021 pic.twitter.com/3saWW11CEt

In the video posted on Twitter, Wood says: “I wear it quite often, particularly because I have knee issues.

“I call it my five-hour ache; after about five hours of riding I often get a bit of pain in the patellar tendon particularly and so I really find the Spider Tech knee tape really helps for that.

“We’re doing both legs today because it’s a recovery day and I really shocked the system the last two days in the mountains.

“It was really challenging hard racing and it was also challenging conditions with the rain, and I find that this synthetic stuff really helps with reducing inflammation—it just gets you feeling a bit better.”

As well as stretching the legs on the bike, there are some serious tools for helping out the muscles.

Dorian Godon of AG2R Citroens was having a “little bit of rest”, while the team's physiotherapists worked some magic with EME’s Polyter Evo.

Last but not least, there are journalists like us, ruining the relaxation by pestering the riders for answers to questions.

Enric Mas and Miguel Ángel López carried out this duty for Team Movistar in a live-streamed press conference as part of their rest day.

What are your plans for today’s “rest day” as you recover from watching the thrilling racing?