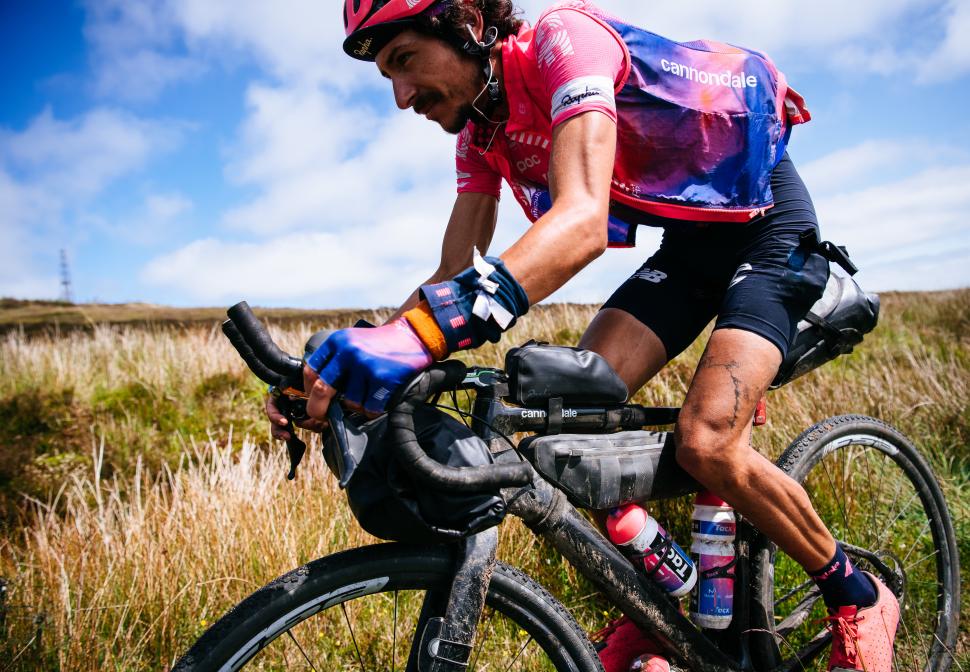 Completing the full Tour de France course solo and self-supported, the EF-Education Nippo pro hit a rare 20.8 out of 21 on Whoop's strain scale during day 17
by Anna Marie Hughes

Lachlan Morton of EF-Education Nippo rode solo fully unsupported ahead of the Tour de France this year and beat the peloton to the Champs-Élysées by about six days, completing his Alt Tour challenge on 13 July after 17 days of riding - now the team's fitness tracking partner Whoop has released his data to show the full extents of the monster effort. 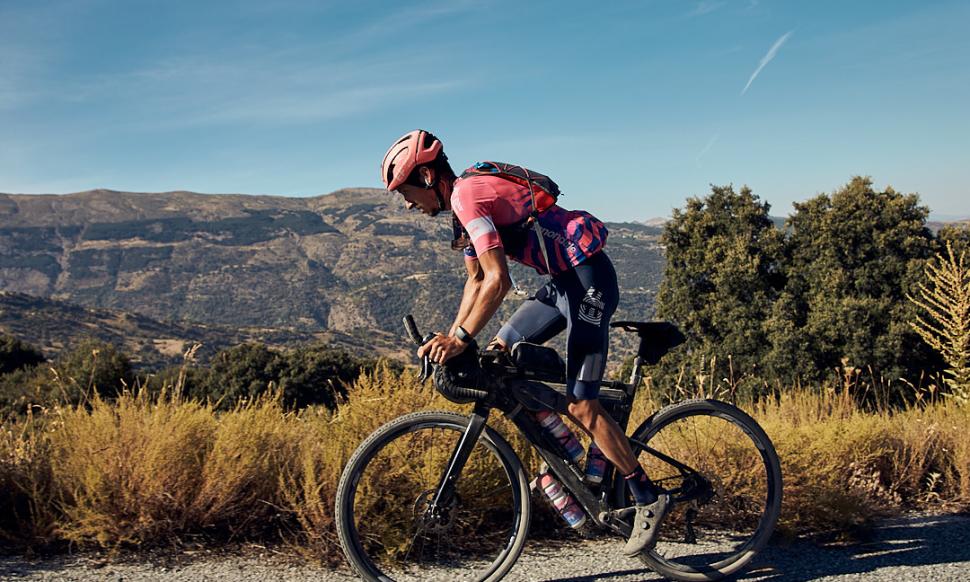 The EF Education-Nippo team has partnered with the fitness and health tracker Whoop for monitoring sleep, strain and recovery. Looking at the data collected you can see how Lachlan’s body coped with the strain it was under as well as the intensity of his Alt Tour compared to the Tour de France the rest of the EF team were riding.

The two graphs below show the differences in the distance that Lachlan rode each day versus the EF team, as well as the total calories burnt. 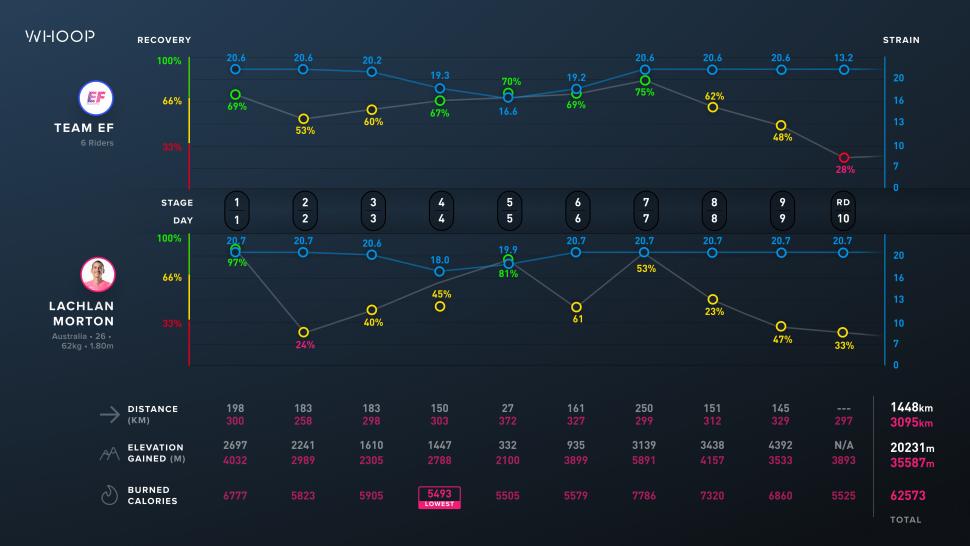 Lachlan not only rode the length of the Tour de France stages, but also the distance of the transfers in between stages, bringing his distance up to 5,509km (compared to the EF team’s 3,071km) and elevation gain to 66,831m (vs. 47,376m). That’s almost 20,000 more metres of climbing than riders at the Tour itself. 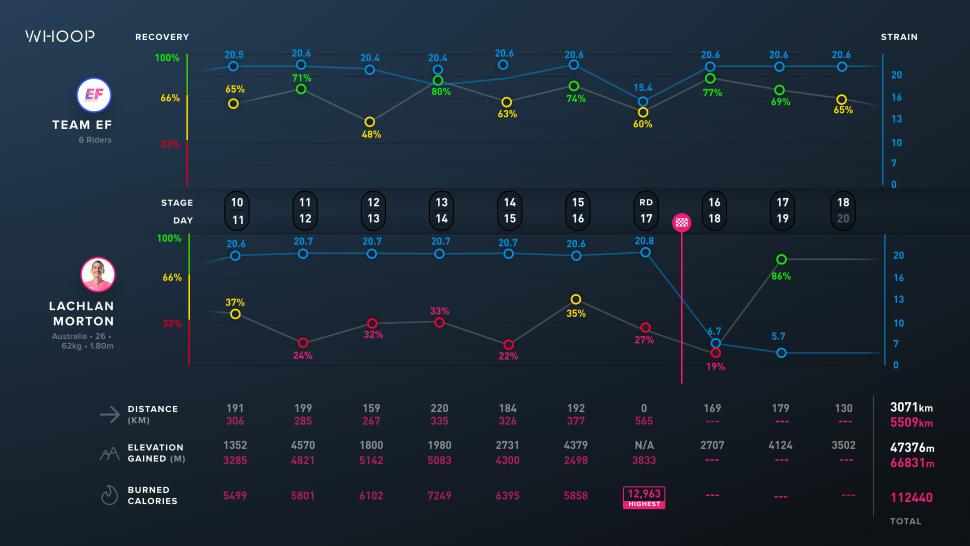 He did his Alt Tour fully unsupported, meaning he didn’t have any team help, hotels and had to source his own food for his trek across France.

Lachlan’s bike also weighed around three times that of the riders of the Tour de France. He was on a 25 kilo Cannondale SuperSix EVO Hi-Mod bikepacking set up, climbing the slopes of Mount Ventoux and the Col du Tourmalet amongst many others. 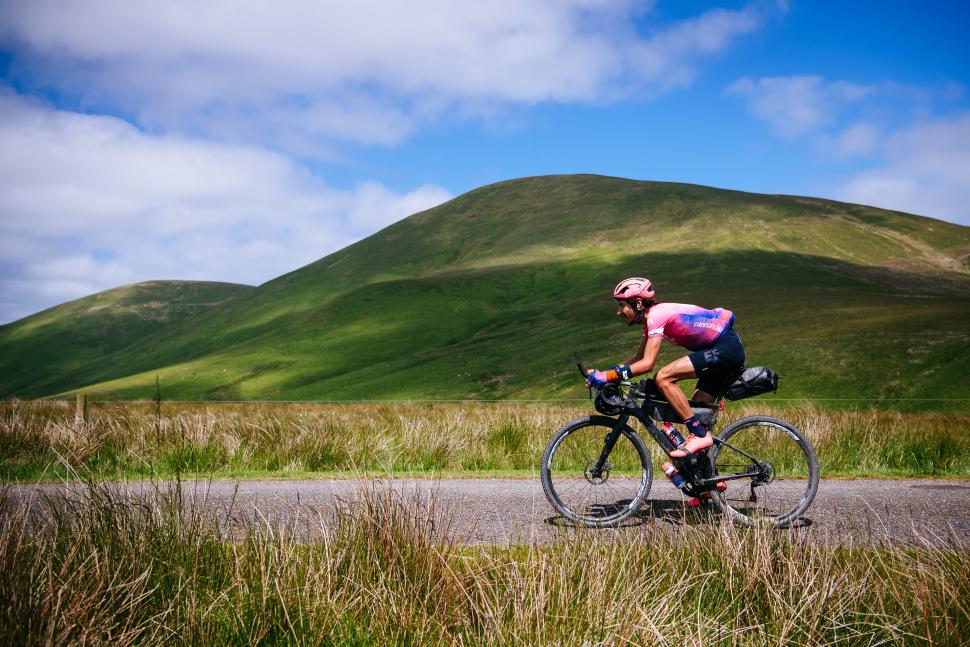 That day Lachlan hit 20.8 on Whoop’s strain scale that goes from zero up to 21. Whoop’s strain measures the total cardiovascular load experienced over a day and day 17 marks Lachlan’s highest peak. You don’t see 20.8 very often…

> You can find out what riders get up to on rest days during Grand Tours over here.

This continuous high daily strain began to take its toll on Lachlan - above you can see again on the second graph that he wasn’t getting enough recovery. According to Whoop, 34% to 66% is needed for adequate recovery, and to calculate this figure the fitness tracking brand averages the previous average historical data against what it's measuring each day.

Lachlan dips below the green and yellow, and into the red zone from days 12 to 15, as well as the final day; his average sleep time of just five to six hours during the 18 days could go some way towards explaining this. 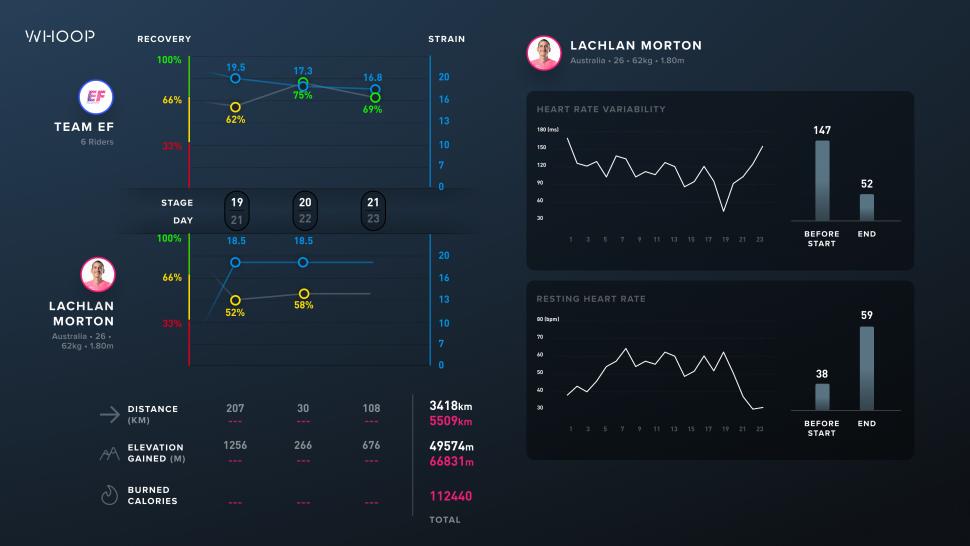 His highest HRV before the Tour started was 147 but when he finished it was just a third of that at 52.

Whoop explains on its site: “Your autonomic nervous system, which controls the involuntary aspects of your physiology, has two branches, parasympathetic (deactivating) and sympathetic (activating).

“The parasympathetic branch (often referred to as “rest and digest”) handles inputs from internal organs, like digestion or your fingernails and hair growing. It causes a decrease in heart rate.

“The sympathetic branch (often called “fight or flight”) reflects responses to things like stress and exercise, and increases your heart rate.

“If you have low heart rate variability, one branch is dominating (usually the sympathetic) and sending stronger signals to your heart than the other.”

His resting heart rate was at 38 when he started this challenge, and after he rode the entire Alt Tour Lachlan’s resting HR went up to 59.

“His body was working overtime to repair the damage it took on over the Alt Tour,” explains Whoop.

On Lachlan’s second day of rest after he completed his solo adventure across France, he finally scored some green recovery, with his highest recovery percentage of 86% with a resting heart rate of 50 and HRV of 124.

“This shows that his body getting on top of the demands he put himself through over the 18 days,” Whoop says.

Would you like these insights for your own riding? We’ve got a Whoop 3.0 strap in for testing and will be letting you know soon how we got on tracking and responding to these metrics.