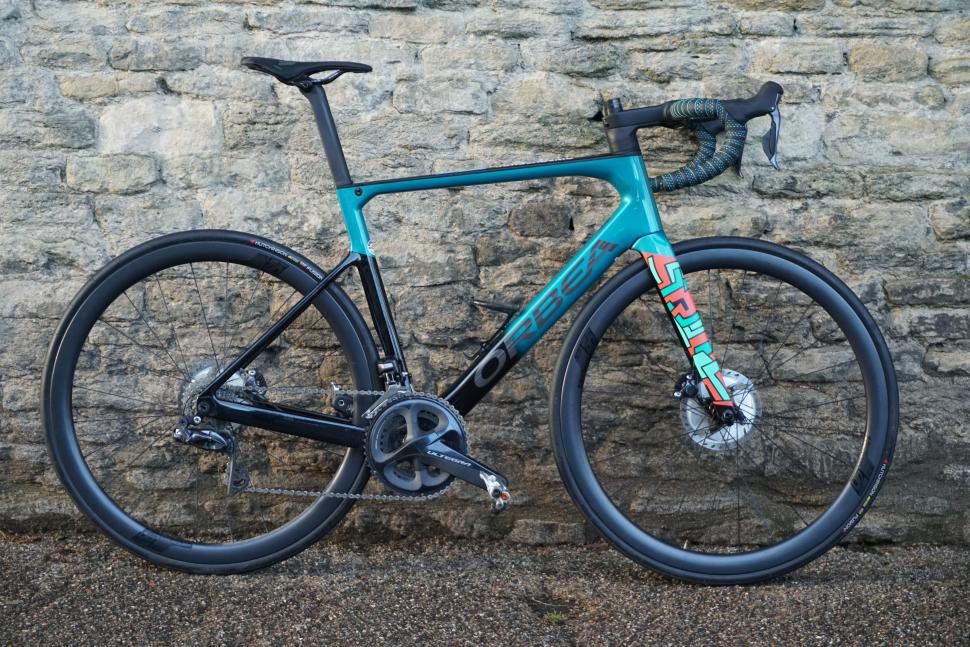 Orbea has been on an upward trajectory recently, launching many new bikes across its road, gravel and mountain ranges, and primed for the 2020 season is the brand new Orca OMX, a disc brake-only bike that aims to offer the perfect balance of weight, stiffness and aerodynamics, with race-orientated geometry and clearance for 32mm tyres.

On paper, the new Orca OMX it's an appealing prospect. A bike that takes wide tyres that typically only endurance bikes have space for, but with the handling and speed from a race bike and light enough to help you battle gravity.  How better to find out then take it for a spin.

Which is what I did. I recently got the chance to spend a few days riding a £4,999 Shimano Ultegra Di2 model and despite some appalling weather, I was able to log enough miles to form a  reasonably decent first impression. We’ll hopefully get a bike in for a more thorough in-depth review later in the year and get to know the bike.

With just three days I had to make the most of the time, so I picked some of my favourite routes around the Cotswolds and got cracking. And first observations are that it’s a fast bike. It’s speedy on the flats, climbs and descents, the stiffness is abundant when sprinting, handling is on the money for a performance race-focused bike, and comfort is reasonable despite the skinny 25mm tyres.

The race-focused geometry ensures the Orca OMX is bright and snappy when you come to corners and generally moving the bike around the road. It feels nimble when requesting a change of direction, thanks to the short wheelbase and chainstays, which number 991mm and 408mm respectively for the size 55cm I rode. It’s agile and changes direction with light inputs, and predictable in all scenarios and consistent even when the road surface is changing rapidly under the tyre. 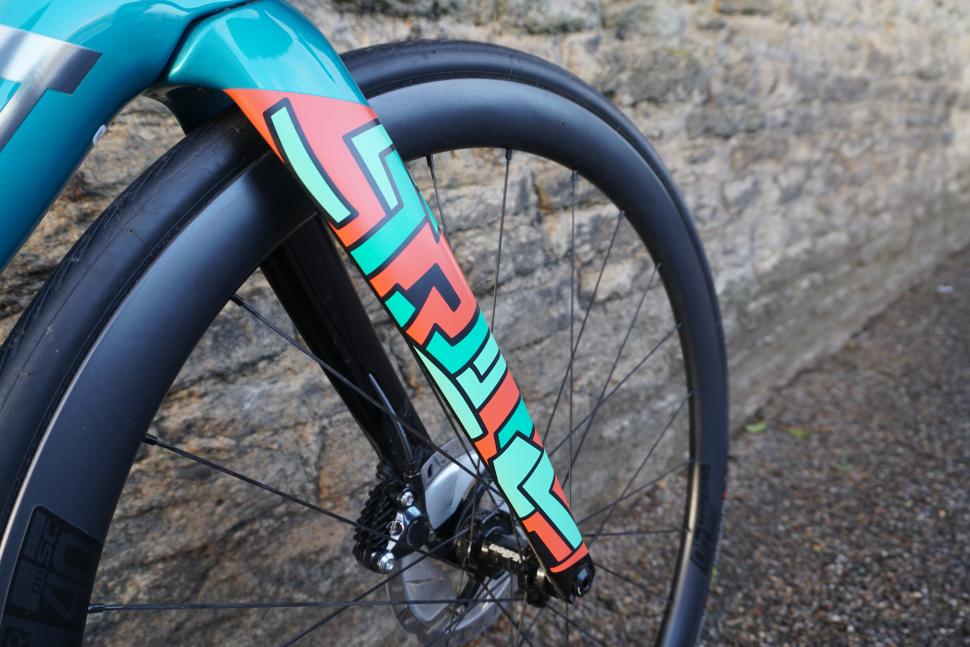 I was impressed with the handling balance of the Orca Aero, and the same is true of the new Orca OMX. It does what you want from a fast performance and race bike. Agile when you’re diving into corners and sprinting out of them, stable and steady when you’re hunkering down in the drops and pushing along against a fierce headwind. Compared to a dedicated aero bike like the Orca Aero, strong winds don’t push and pull you around the road nearly as much. It’s more predictable in challenging weather.

There’s ample stiffness from the massively oversized bottom bracket, down tube and chainstays to ensure that power transfer is instant. On the climbs when you’re heaving out of the saddle, it feels as stiff as you need with no flex when you’re giving it everything you’ve got. Compared to the older Orca OMR the new bike doesn’t feel as outright stiff which is no bad thing, I did find the OMR to be a bit overkill on anything but a buttery smooth road surface.

Despite that preference for fast handling, it did not feel a handful on the longer rides when you’re just cruising along tapping out a steady fistful of watts. Comfort isn't in the same league as an endurance bike with wider tyres. Despite only running 25mm tyres in stock build, the Orca OMX isn’t as harsh and unforgiving as many aero bikes tend to be. It’s a hard ride, there’s noticeable feedback through the contact points that reminds. Wider tyres would help dial back some of the hardness, sadly I didn't have time to swap the tyres so that'll have to wait for a future in-depth review.

It’s a match for some rivals I’ve ridden recently, the likes of the new Cannondale SuperSix Evo, the BMC Roadmachine and the Specialized Tarmac, three bikes that also offer a lightweight focus with a side order of aero. To compare it to the Orca OMX’s stablemates, and compared to the Orca Aero I reviewed in 2018 it’s not as fast but the gap isn’t huge, and it climbs better, and it’s faster than the Orca OMR I rode in 2017.

The new Orca OMX is the result of 16 years of refinement with the focus being to blend the low weight and stiffness of the Orca OMR and the aerodynamics of the Orca Aero.

Currently, high-end performance road bikes demand you choose between outright aero performance or low weight, but the Orca OMX aims to offer a balance between these two extremes. It’s neither the lightest or most aero but draws enough from each dedicated platform to be a highly versatile bike that will perform well in every possible situation. 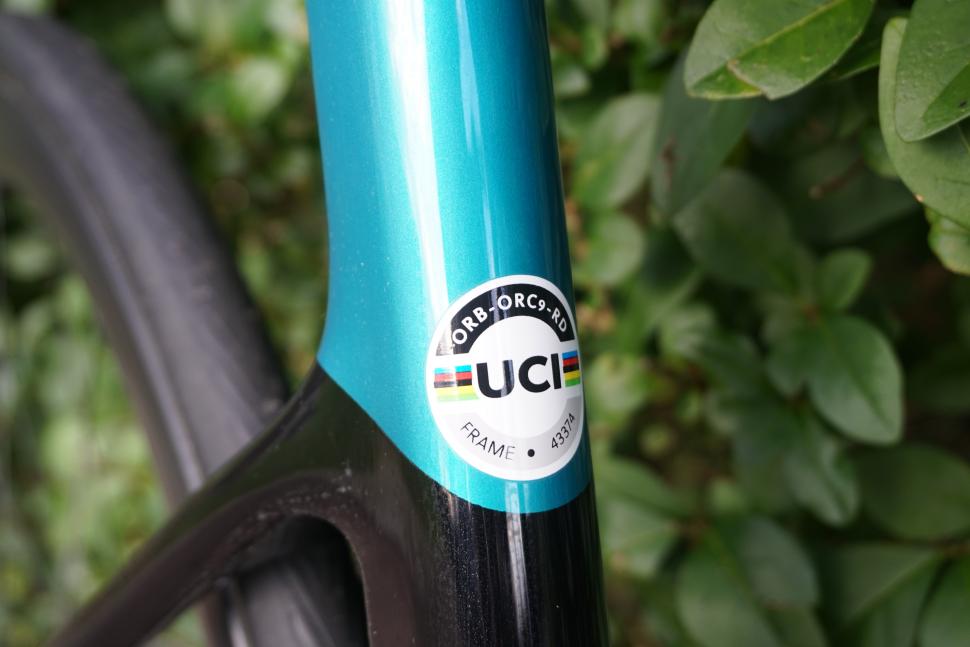 In a way, the Orca OMX points to where road bikes are likely to evolve in the next decade, and unless the UCI drops the 6.8kg weight limit it’s likely we’ll see many more bikes designed along similar lines. There are a few other examples, the Specialized Tarmac, Cannondale SuperSix Evo and Scott Addict are two bikes that previously were only concerned with weight and stiffness, but now benefit from the latest aerodynamic lessons learnt on dedicated aero bikes.

The Orca OMX is a full carbon frame and fork designed entirely around disc brakes and utilises Mavic’s SpeedRelease thru-axle system for speedier wheel removals. The profile of all the tubes are as aero as possible without compromising the weight, and at a claimed 833g for a size 53cm frame it’s certainly lighter than dedicated aero bikes. For comparison, the old Orca OMR was 790g, a Specialized Tarmac is 733g and an aero bike like the Cannondale SystemSix is 981g. 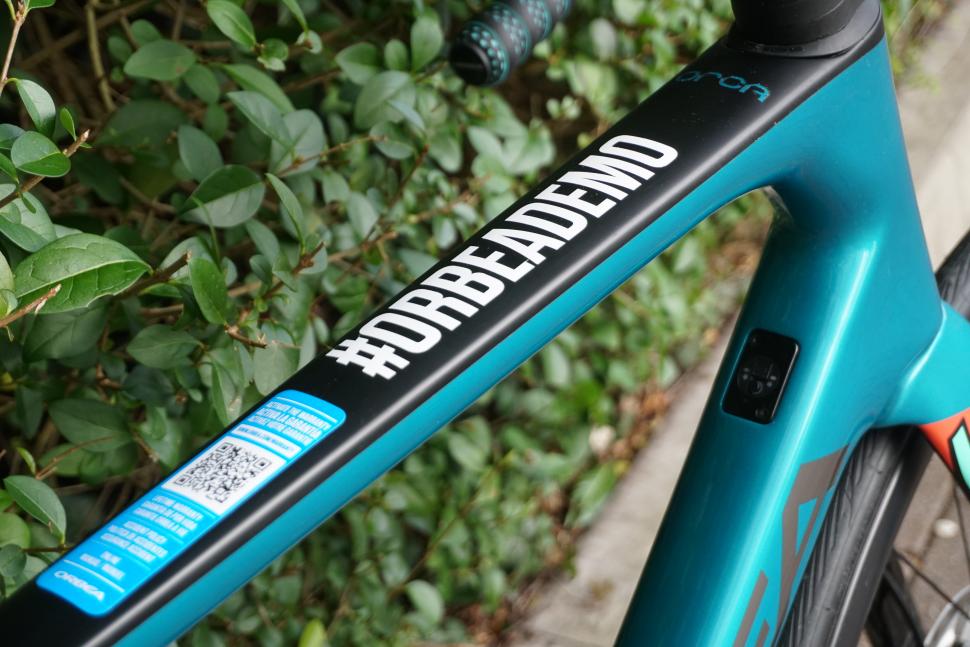 A truncated down tube, D-shaped seat post, dropped seat stays and full internal cable and hose routing see to it that aerodynamic performance should be good. The biggest nod to aero is perhaps the Freeflow fork, which with its widely spaced fork blades looks distinct to most other bikes on the market.

A benefit of disc brakes is increased tyre clearance, and in this department, the Orca OMX has its key rivals beat, with a massive 32mm maximum tyre being accommodated in the frame and fork. That’s the stuff of endurance bikes, not road race bikes. Other details include a tapered head tube, BB386 bottom bracket, flat mount disc brakes and 12mm thru-axles with the Mavic SpeedRelease option. 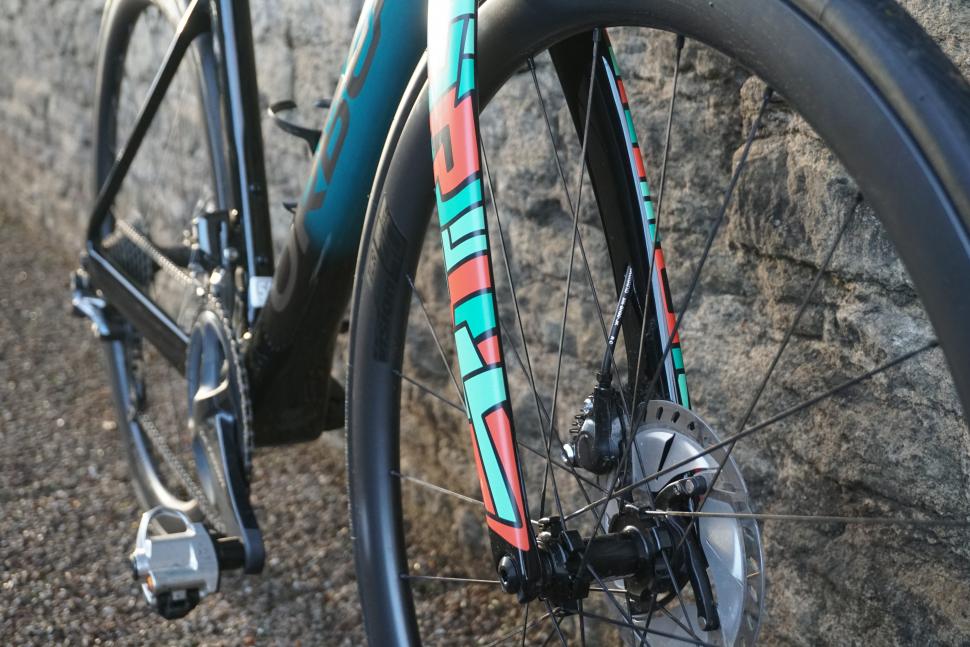 The Orca OMX comes in standard options (see below) and you’re also able to choose your combination of components, colours and styles through Orbea’s MyO platform. 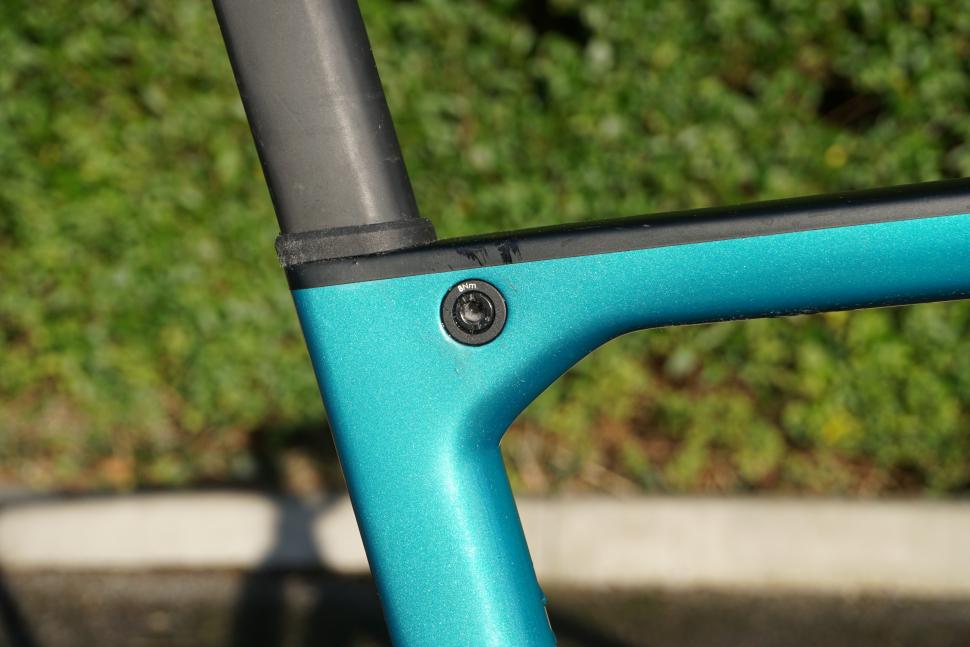 There are some neat and very sensible details on the Orca OMX that shows Orbea have resisted any compromise in pursuit of the goals set out for this new bike. The internal cable routing underneath the stem, which has similarities with other bikes such as BMC, ensures clean looks and low drag performance whilst still allowing easy changes, whether it’s stem length or height, or swapping the handlebar. 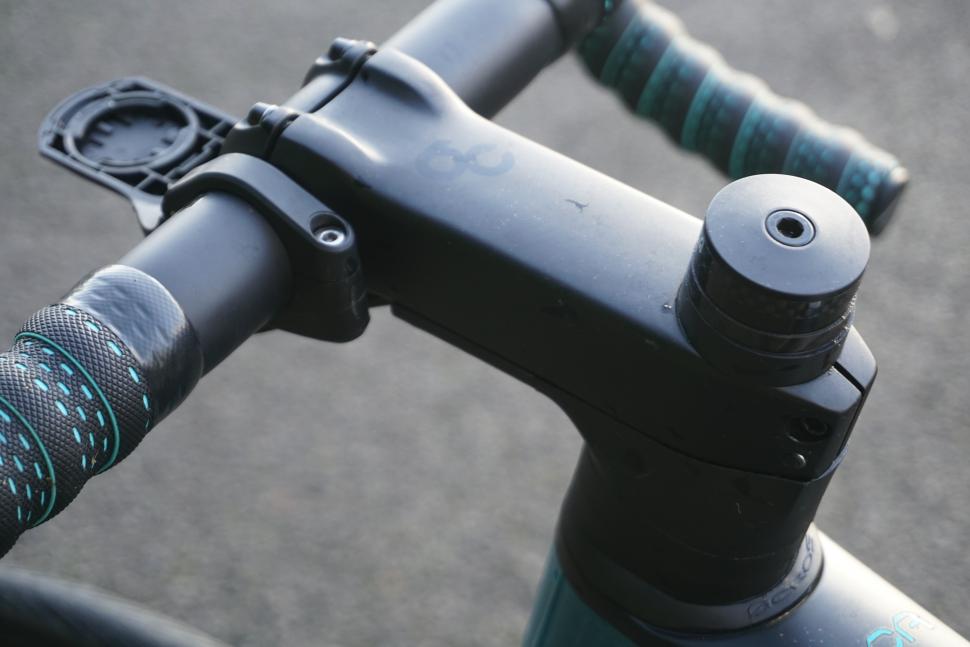 An internal seat clamp is a common detail on high-end bikes, but Orbea has struck a neat compromise of using a decent sized Allen key (less likely to round a big bolt) that is easily accessible from the side of the top tube. It might drop a point for vanity but I’m okay with that. I had no problems with post slippage either so that’s all good.

The new seat post is also worth a mention. The saddle clamp comprises a single bolt for adjusting the fore-aft, and another bolt on the top which you can access through the saddle cutout lets you, at the turn of an Allen key, adjust the angle of the saddle. That’s the neatest thing I’ve seen on a seat post in a long time. It all adds up to make it easier to build and setup, and live with.

As mentioned, the model I rode costs £4,999 and is one of five stock models, with prices starting at £4,199 and topping out at £8,299. As with all Orbea bikes, the new Orca OMX can be fully customised through MyO with everything from the paint job to the stem length changeable. Regardless of the spec, there are three stock colours to choose from with further personalisation available if you want it. You can even have your name printed on the top tube. 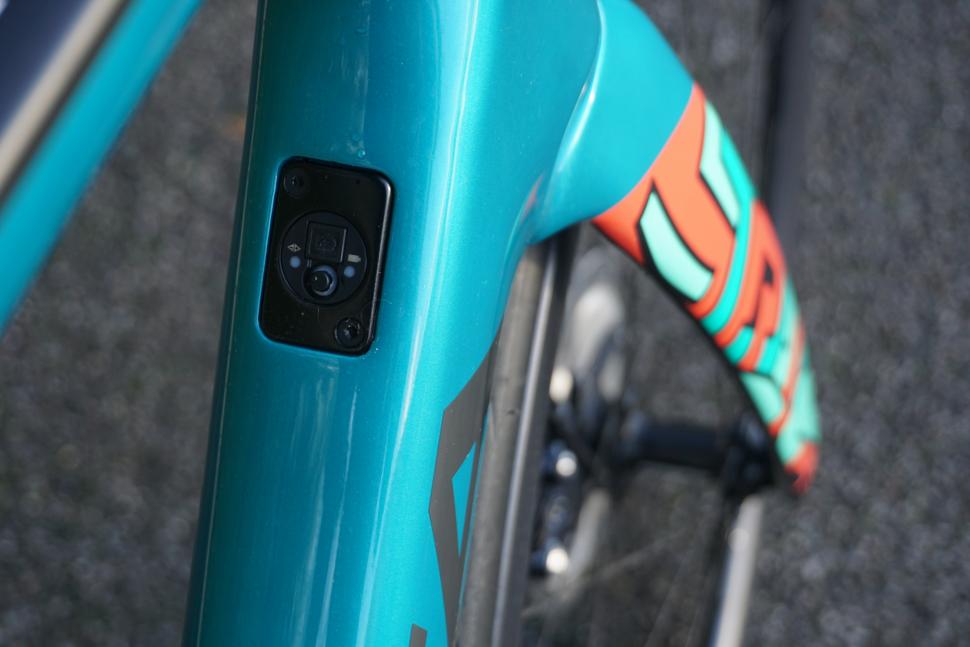 Orbea fits the bike with its stem which routes the Di2 wiring and hydraulic hoses underneath, with split aero spacers letting you easily adjust the stem height. The handlebar is carbon with an 80mm reach and 125mm drop, the seat post is carbon also and Selle Italia’s new SLR Boost SuperFlow L saddle (whew, long name) completes the build. 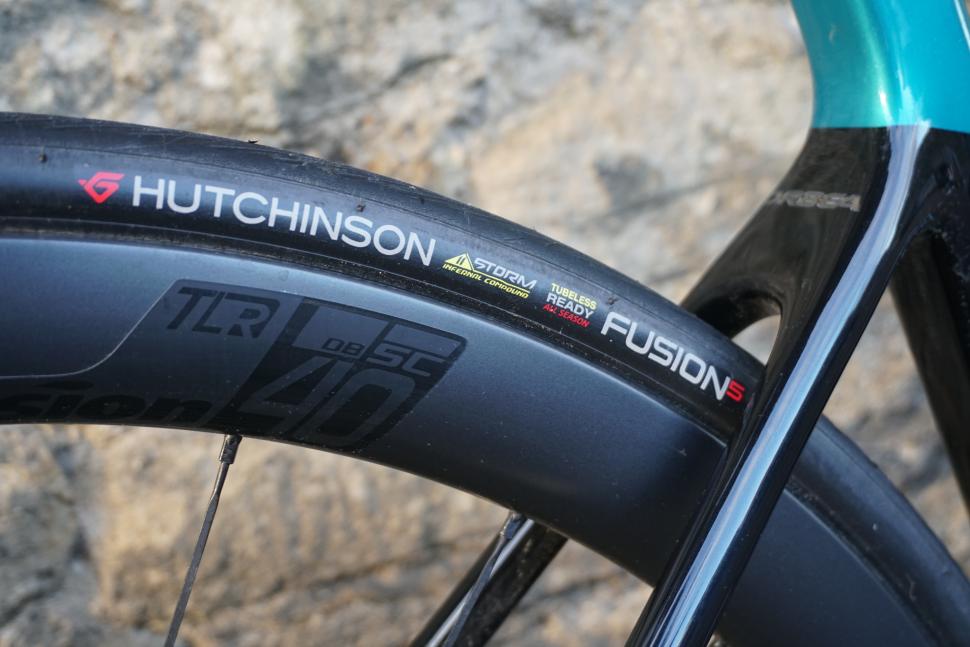 The size 55cm weighed 7.91kg (17.43lb) on my scales. That’s not crazy light it’s 100g heavier than the Orca Aero rim brake I tested two years ago but the specs aren’t the same so don’t read too much into it.

A closer comparison might well be the Bianchi Oltre XR4 which with a Shimano Ultegra Di2 groupset weighs 7.8kg, but then you are going to have to find another £2,700 to pay the premium for that Italian steed.

Though my time with the Orca OMX was sadly short, it was long enough to come away highly impressed. Here’s a bike that attempts and succeeds to bring distil elements of an aerodynamic and a lightweight bike into one model that makes it easy to answer the “what race bike should I buy” question when faced with the choice of fast or light. The OMX is both those things wrapped up in a bike that provides exceptional handling and with the ability to take up to 32mm tyres, has real-world versatility. If only it had mudguard mounts…

A huge thanks to Performance Cycles and Orbea for arranging this test ride.