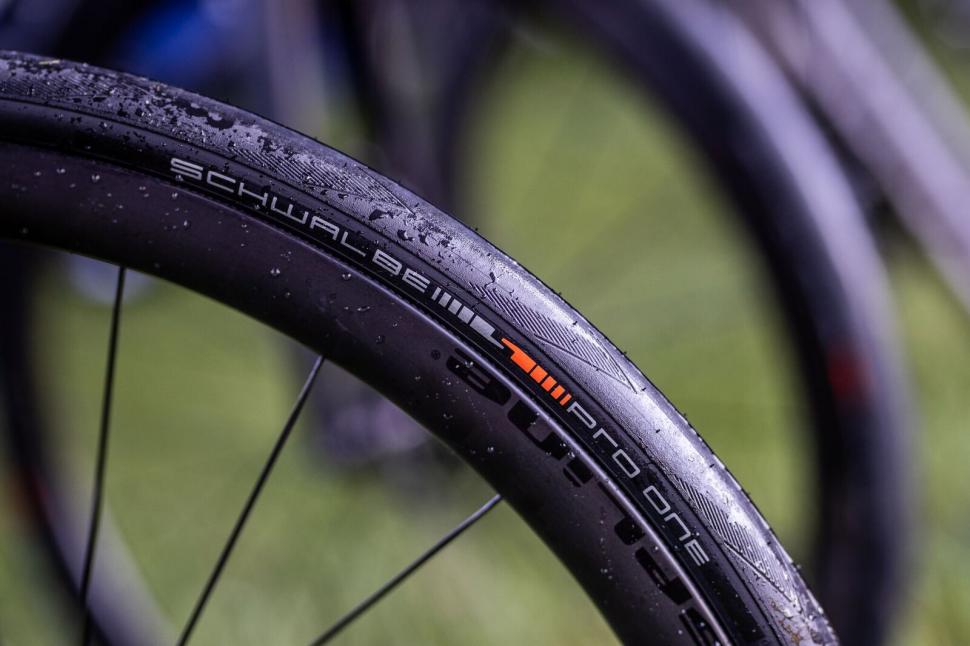 German tyre giants Schwalbe have launched a brand new Schwalbe Pro One for 2020, as well as revamping all the tyres in their Race, Allround and Sport lines. While clinchers to be used with tubes are still offered, Schwalbe have called the tubeless versions of their new tyres 'Tubeless Easy' (TLE) to reflect how quick they are to fit and inflate when paired with modern rims with a 19mm internal width.

Schwalbe launched their first tubeless road tyre in 2012, and the Pro One Tubeless has been around since 2014. On the whole it's accepted as one of the best tubeless racing tyres on the market, and received a glowing road.cc review to boot... so why the need for change? Schwalbe say the new version is a 'quantum leap' and sets the new benchmark for tubeless tyres. A whole new construction method has resulted in a more supple tyre that is as easy – if not easier – to fit than a regular clincher, without the need for an air blaster pump to inflate it. 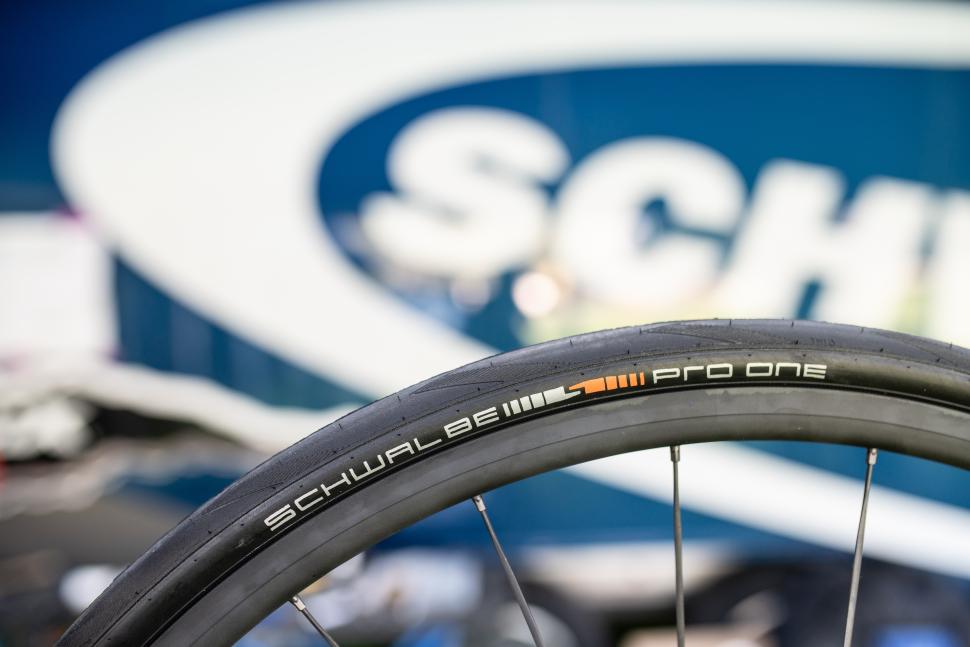 While it might sound a bit like "marketing bullshit" (Schwalbe's words at the press conference, not ours), the Creating Souplesse theme of the Pro One launch was to create an "unparalleled supple riding experience", a tyre that you can feel rolling easily beneath you while being reliable enough to provide ample grip and puncture protection.

With almost the entire pro peloton still riding tubulars, Schwalbe are convinced their new Pro One will convince more pro teams to take the plunge and switch to their tubeless tyres, as Canyon SRAM and Team Wallonie Bruxelles already have.

"Here we have young, innovative riders in the saddle who, in the age of disc brakes and electronic shifting, would not accept hand-sewn tubular tyres as state-of-the-art," says Schwalbe road product manager Peter Krischio. 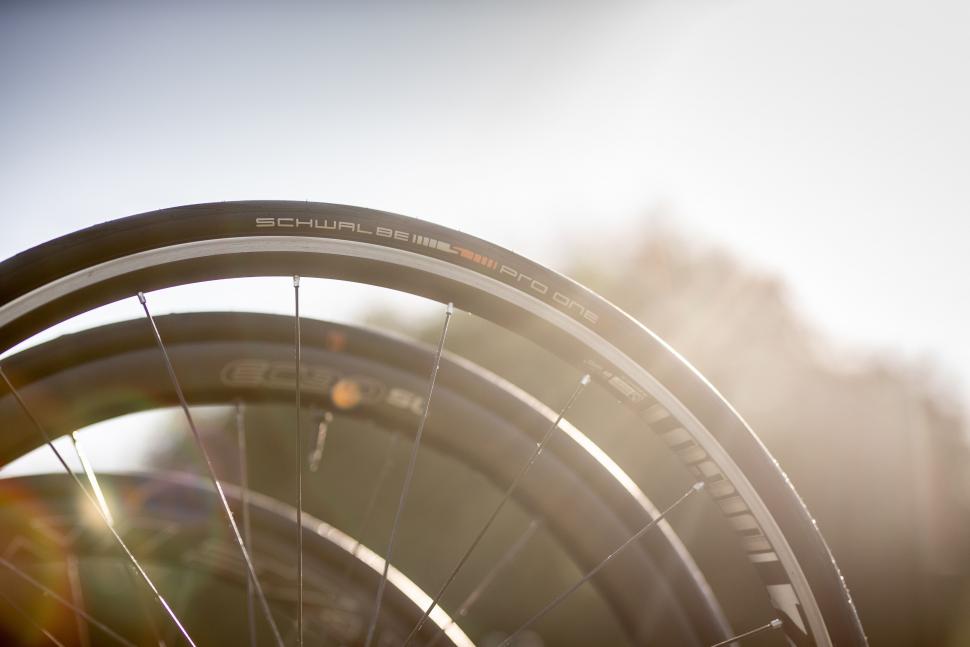 The Pro One TLE has all the claimed improvements you'd expect to see, such as lower rolling resistance (13% less than the Pro One Tubeless), lower weight, better grip and enhanced durability. The weight of a 25mm version is 245g, 30g lighter than the previous Pro One Tubeless, and Schwalbe say it will be good for around 10,000km. The Pro One TLE comes in 25mm, 28mm and 30mm widths.

The carcass construction has been stripped back on the Pro One TLE so there are two layers instead of four. This is complemented with a V-Guard puncture protection belt, a specifically developed polymer fibre that you'll also find on bulletproof vests.

Schwalbe say rolling resistance or suppleness of the tyre isn't affected by this light 14mm-wide belt, and there is an additional triple layer sidewall to protect against cuts. Schwalbe have also developed an entirely new compound called Addix Race. It's a multi-compound made of specific polymer blends, with various different blends used for the centre and sides to increase grip during cornering without compromising the rolling resistance.

A sealing lip makes for easy mounting, and Schwalbe say all their new Tubeless Easy tyres truly live up to the name by being easy to fit without needing tyre levers and are possible to inflate with a regular track pump. 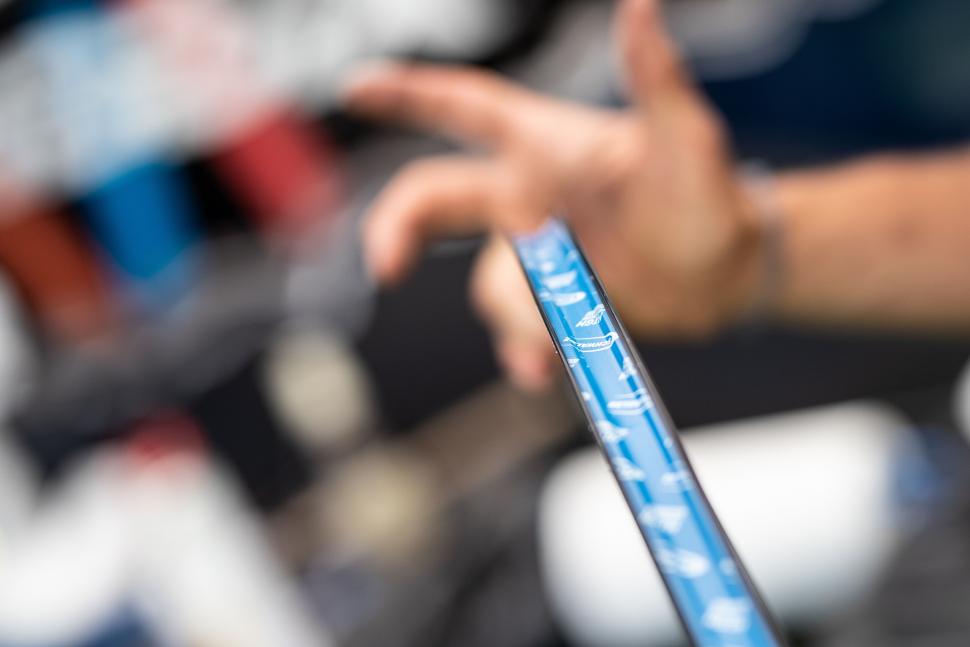 For those who are riding rims with smaller internal widths than the optimal 19mm, Schwalbe say some of the features will be retained but it won't be ideal in terms of easy fitting and the width of the tyre on the rim. As an example, on a rim with a 17mm internal width, they would expect a 25mm Pro One TLE to measure about 24.6mm, whereas on a C19 it blows up to around 27mm.

Schwalbe will be publishing a detailed chart and further info on the suitability of various rim width and tyre size combinations to help customers who want to run the tyres tubeless on rims with narrower internal widths - we'll post the link and update when Schwalbe tell us where it lives on their website. 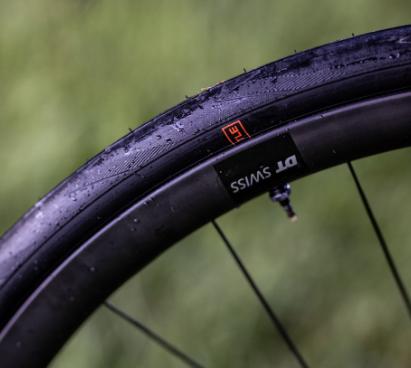 Schwalbe said they recognise there are still those riders out there whose arms can't be twisted to make the switch to tubeless, so they are also offering 'Tube Type' versions of the Pro One too. These cannot be run tubeless and are specifically to be used with inner tubes, while the TLE can be run with tubes, but perform optimally without. The two tyre types are clearly marked TLE or Tube Type on the sidewall to avoid any confusion.

Even if the viability of going tubeless is still up in the air for some of us, one thing we can all agree on is that tan wall tyres look the business and this doesn't have to be limited to pairing them with vintage-looking or adventure bikes, with Schwalbe producing their new tubeless TT tyre in a tan wall colourway (Specialized and Hutchinson also produce earthy-coloured race tyres). ]

Pro triathletes Sebastien Kienle (above) and Patrick Lange have been riding them for a couple of months, with both believing in the energy-saving claims enough to switch to tubeless set-ups for Ironman racing.

The TT Tubeless Easy uses just a single Addix Race compound rather than a multi, which gives it less protection but improves the rolling resistance and lowers the weight. Schwalbe say the rolling resistance was calculated at 9.8 watts, a figure they say achieves the 'Holy Grail' of under 10 watts for a speed-focused tyre. That's still not quite down to the 7 watts of resistance the Vittoria Corsa Speed G+ 2.0 has, calculated by Bicycle Rolling Resistance in independent testing, but Schwalbe may claim their tyre is more durable - they say it can easily last for 3,000km.

Once again the TT tyres are optimised for 19mm rim widths, and the weight is cut right down to 205g for a 25mm width version - they also come in 28mm.

The rest of the revamped 2020 range 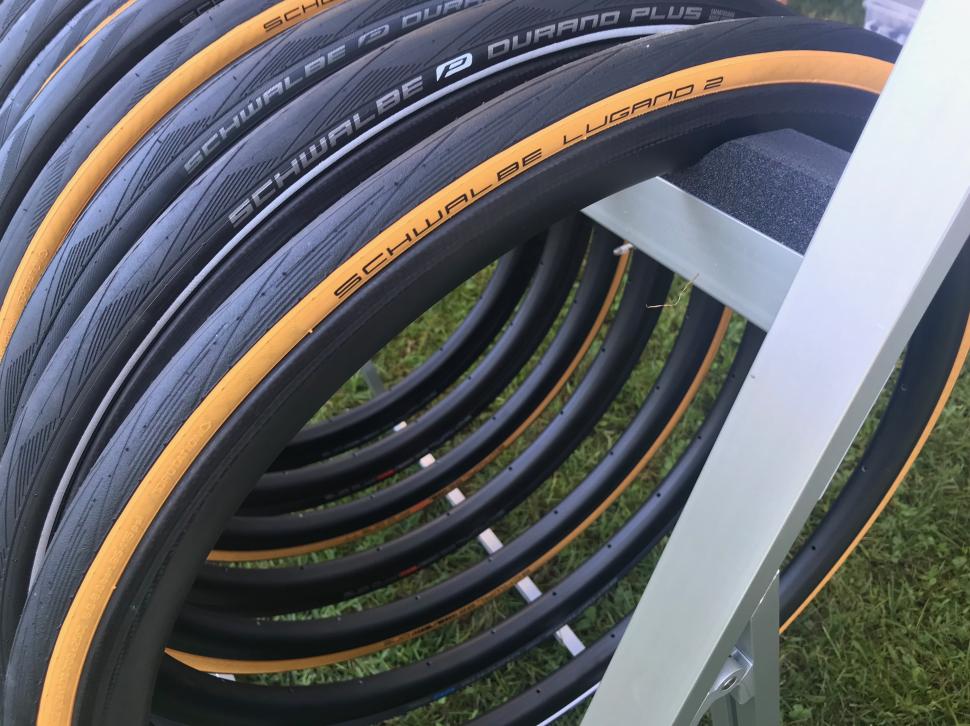 Schwalbe have also made new Tubeless Easy versions of their One all-round road tyre with an additional Raceguard puncture protection belt, coming in 25, 28 and 30mm widths and weighing 275g for a 25mm TLE version.

This is also available as a Tube Type, and the updated Durano DD, Durano Plus and Lugano 2 tyres are all Tube Type only. 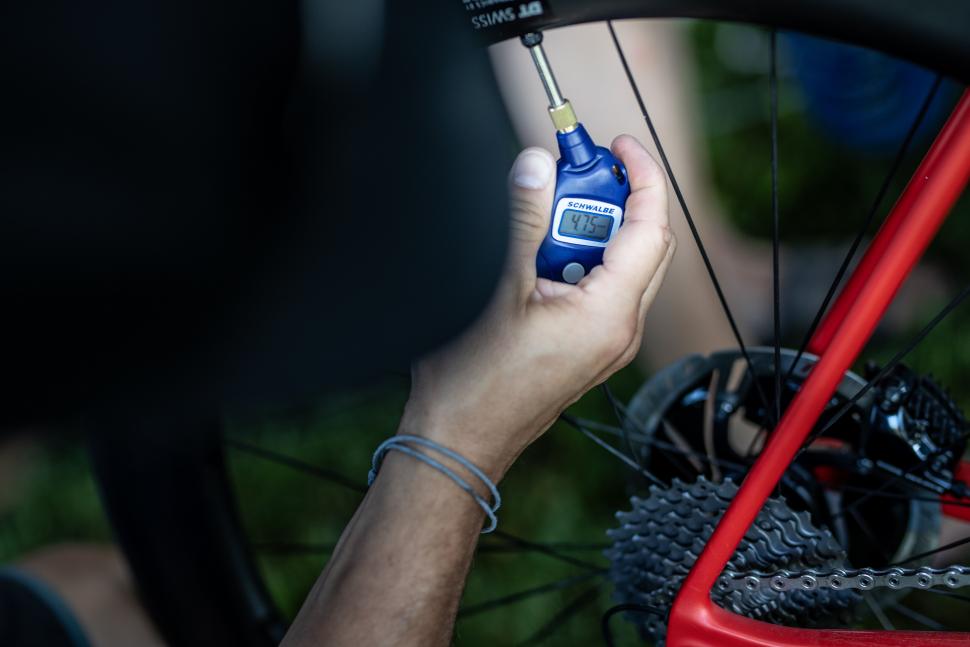 Schwalbe were keen to tell us that they sincerely believe the days of high pressure are over thanks to tubeless; tyres blown up to the max give less connection with the road, and the latest research on rolling resistance reveals it's not necessarily faster either.

Schwalbe officially recommended that a 25mm Pro One TLE tyre should be run at 80psi, and as low as 50psi for a 30mm version. They were also very forthcoming about what pressures some of their sponsored athletes use, telling us that Ironman world champ Patrick Lange runs his Pro One TT TLE at 97psi on the front and 101psi at the back - that's on a 25mm tyre fitted to a rim with a 19mm internal width. 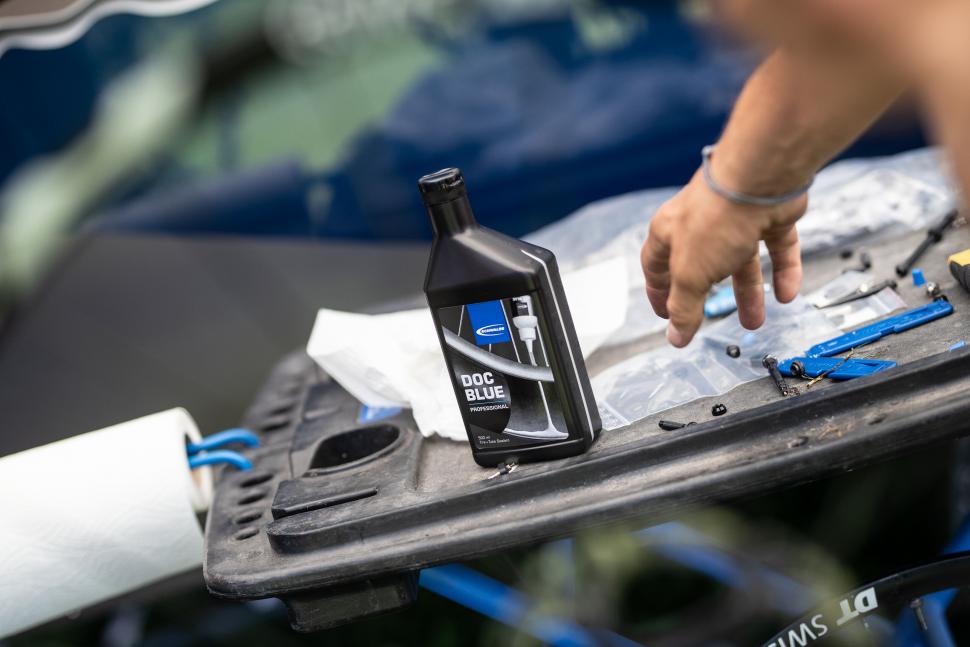 As a sidenote, Lange actually punctured at a recent race in Frankfurt and was forced to insert a tube after the sealant didn't plug the hole. Schwalbe told us this could have been down to Lange attempting to use a different sealant to their recommended Doc Blue formula (make of that what you will), and/or the hole was bigger than 3mm so couldn't be plugged. Even so, the easy mounting means Lange was able to fit the tube pretty quickly when it became apparent the sealant wasn't going to do the trick.

In an example of the sealant doing its job on a smaller hole, Schwalbe say Sebastien Kienle's data from a recent race revealed that he actually suffered no power losses from his tyre going down from 100 to around 60psi after getting a small cut in his tyre that the sealant successfully plugged; reiterating that higher pressures doesn't translate to faster speeds.

The ride, and first fitting 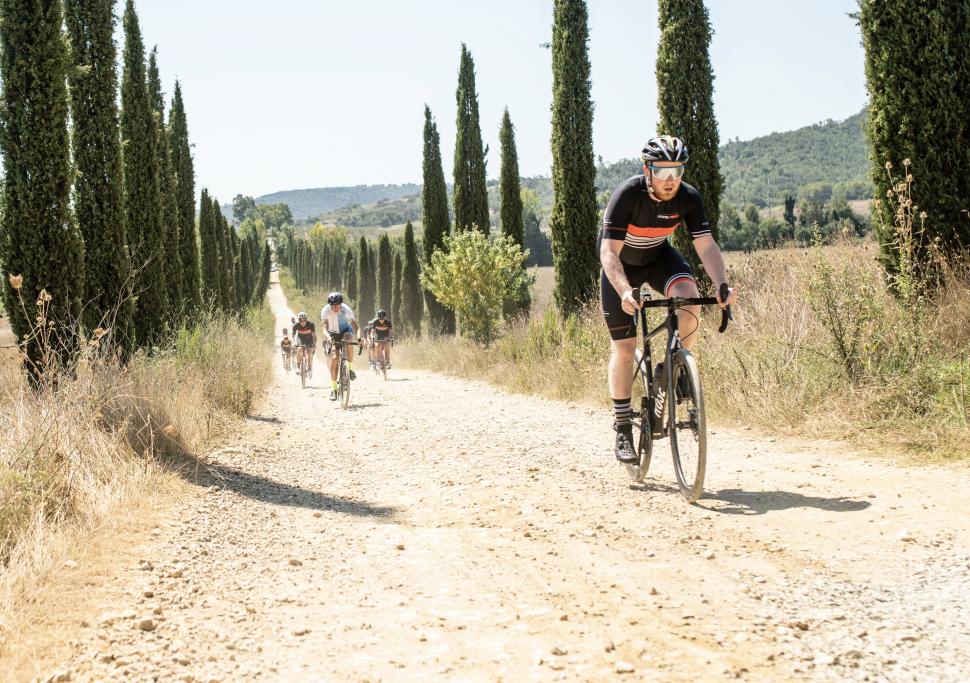 I've already given the Pro One TLE tyres in a 30mm width a good old pounding around the hills of Tuscany on the press launch, including on some of the famous white gravel that appears on the Strada Bianche course. I'm not going to pretend I know if these tyres are amazing/ok/rubbish based off a couple of rides, but I can confirm there were no punctures, they rolled well and felt grippy on some pretty dodgy road surfaces and on smooth tarmac, the speed ticked along like I'd expect it to. When we finished the test rides, I got to have a go at getting them on a rim multiple times with just fingers to see if they truly are "Tubeless Easy". On a DT Swiss R24 Spline wheel, with an internal rim width that was actually less-than-optimal at 18mm, I managed to get the tyre on with just fingers in less than a minute on multiple attempts. It was by far one of the easiest tyre fittings I've ever done, that's including clinchers with tubes. The only combination I can remember being as easy to fit was a set of 24mm S-Works Turbo tyres mounted to Profile Design 58/38 carbon rims - it will be interesting to see if the Schwalbe Pro One TLE slides on like butter on a multitude of different wheels, obviously I won't know that until we get hold of a set to try out for longer. 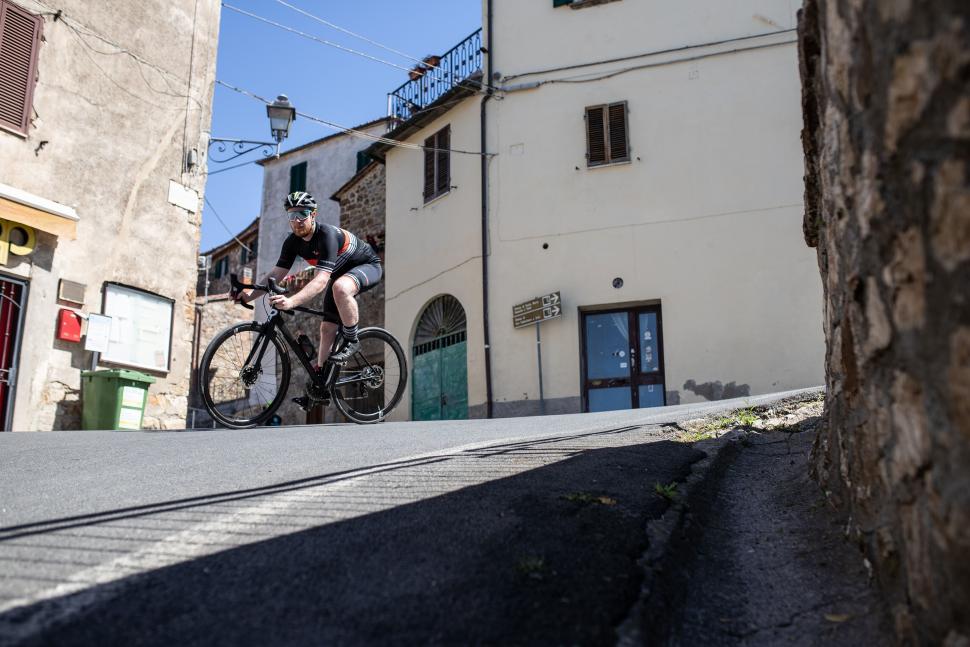 Schwalbe aren't going to keep us hangin' on any of the new tyres, with the first shipments arriving in the UK within a fortnight. Unfortunately we're still waiting on a full UK price list and hope to have this very soon, but so far we know the price of the Pro One TLE in euros will be €69.90 per tyre. Check back for a full review later in the year...