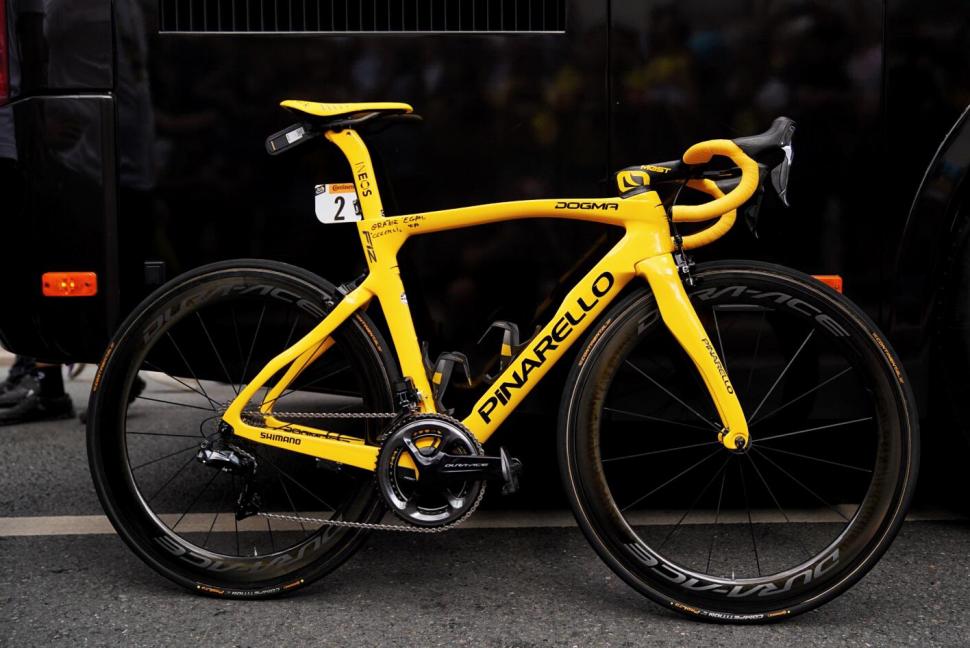 Among the many perks of winning the Tour de France is getting to ride around Paris on a special yellow bike to match the maillot jaune. Egan Bernal’s regular black Dogma F12 was swapped for a very yellow version complete with a handwritten congratulations from Pinarello boss Fausto Pinarello.

Pinarello must have stocked up on yellow paint. It has provided many yellow bikes in the last decade - with Team Sky and Team Ineos winning seven out of the last eight Tours. Also painted yellow is the seat post, MOST Talon handlebar and the Fizik saddle, bar tape and Elite bottle cages are finished with yellow. 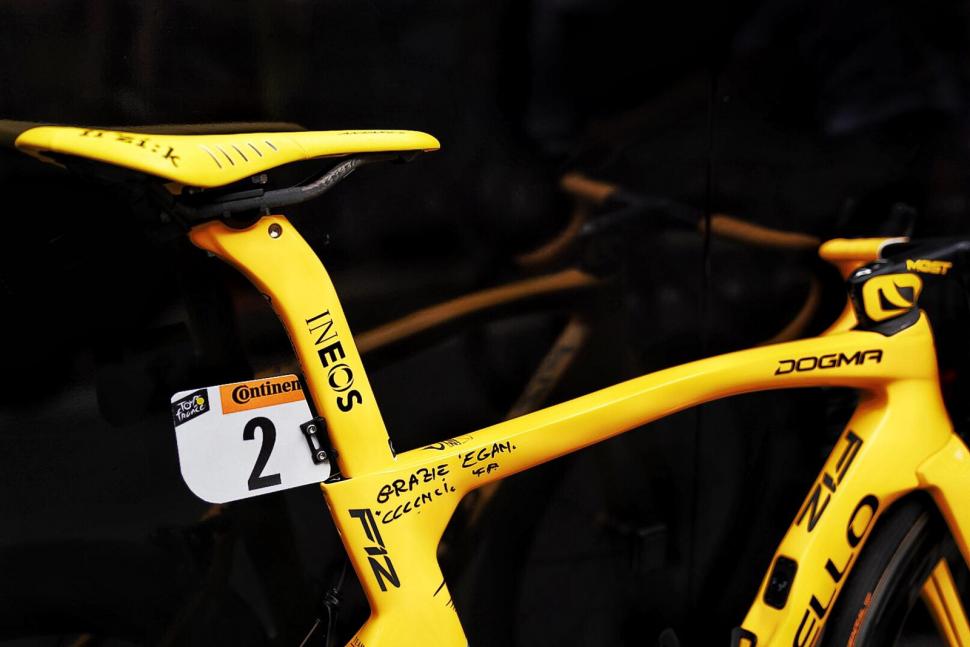 Yellow paint aside, the bike is largely the same as the one he used for the three-week race, but there are a few differences. We suspect he was riding the Dogma F12 X-Light in the key mountain stages, a version of the Dogma that uses a higher grade carbon fibre to shed about 100g over the regular version. 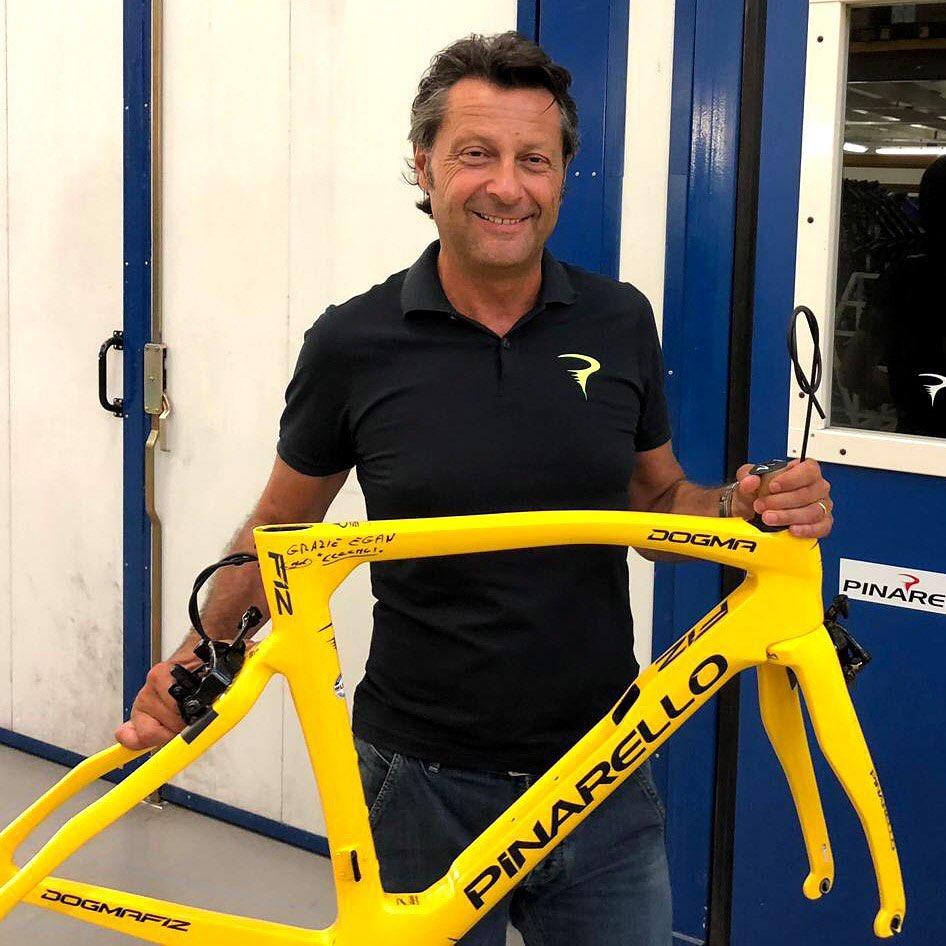 According to Pinarello, the frame was flown to Paris the night before the final stage by Fausto Pinarello himself and delivered to the team mechanics to be assembled ready for the final stage. It’s a trip the company boss has gotten very used to making. It’s also the 15th time a Pinarello  bike has won the Tour de France A key difference to the bike pictured here, which Bernal rode on the processional final stage around Paris, is in the wheels. Whereas he rode regular Dura-Ace C60 wheels from sponsor Shimano for the final stage around Paris, on the key mountain stages Bernal and the rest of the team swapped to very expensive and very light all-carbon Lightweight Meilenstein wheels, a blast from the 90s if there was ever one.

These wheels, which we exclusively revealed before the start of the Tour de France in Brussels, weigh about 935g. That is much lighter than the 1,471g for the Dura-Ace wheels. That change will ensure the bikes are bang on the UCI’s 6.8kg weight limit if they weren’t before, and other potential rotating weight benefits, though any benefits are often disputed. As such, it would be interesting to get Team Ineos to open up to the reason for buying these wheels. 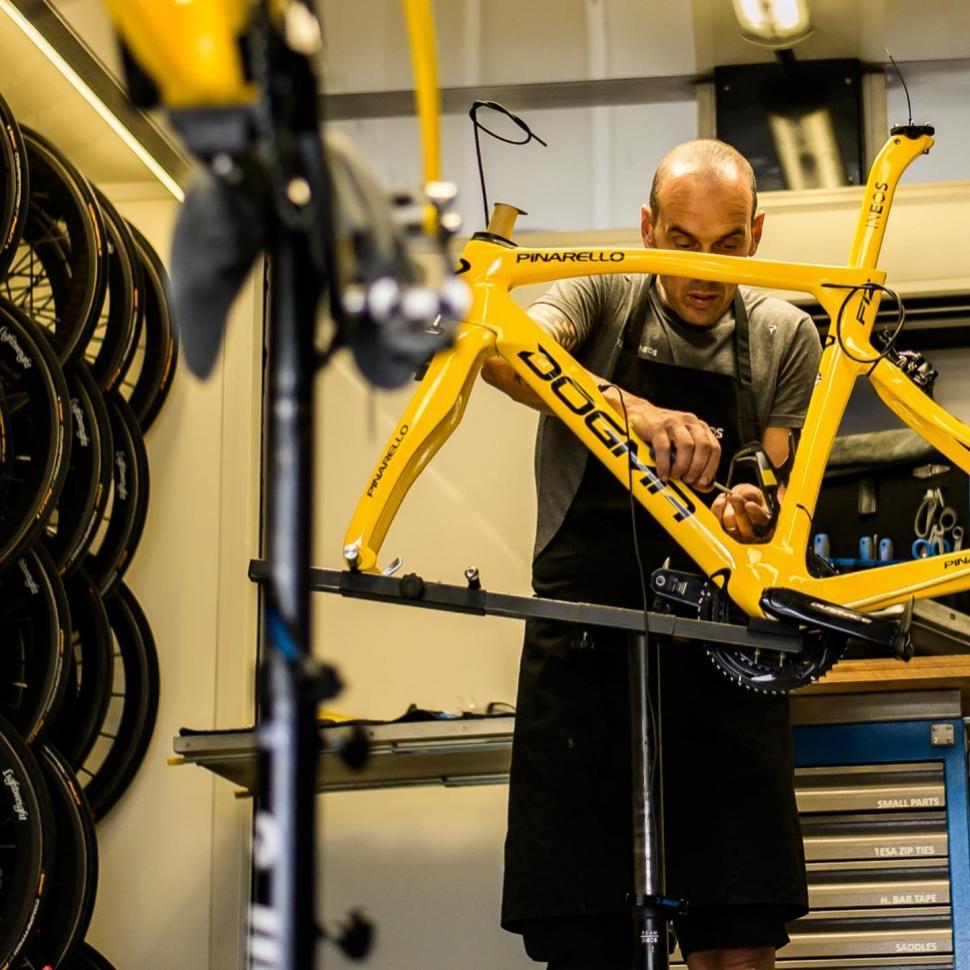 Tyres were the same, 25mm wide Continental Competition ProLtd tubulars glued to the carbon rims. They are probably the most popular tyre in the professional peloton.

Other key equipment that got Bernal around France includes the Shimano Dura-Ace Di2 groupset with a 53/39t chainset and 11-30t cassette, with a Shimano power meter for measuring and recording his power and speed. He used the new Most Talon carbon aero one-piece handlebar and stem, with a 13cm stem and 40cm wide handlebar. A Fizik Antares saddle with carbon rails and Shimano SPD-SL pedals completes the build.