This is the Canyon Ultimate CF SLX belonging to Team Movistar's Alejandro Valverde.

Valverde, aged 39, has had a long and sometimes controversial career – he served a two year ban as a result of the Operacion Puerto blood doping investigation. He has won well over 100 professional races including the Vuelta a Espana, Criterium du Dauphine (twice) and Liege-Bastogne-Liege, and had 17 Grand Tour top 10 finishes. 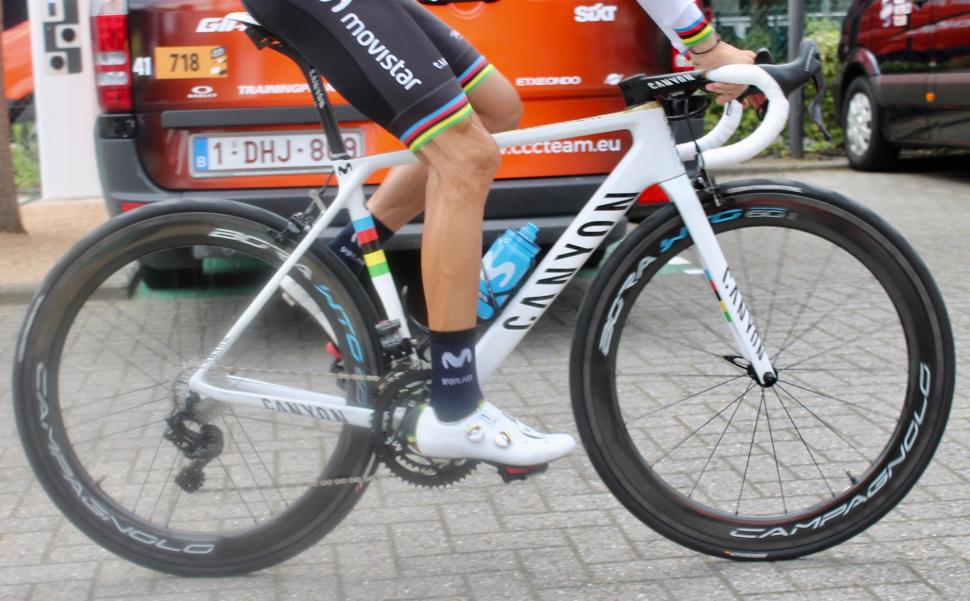 Valverde is also the current World Road Race Champion, which is something he and his sponsors are keen to shout about with rainbow stripes (okay, you'll never see a rainbow with colours in this particular order) on his frame, fork, handlebar tape, power meter, saddle, helmet, glasses, shorts, shoes... When we spotted Valverde prior to the Grand Depart of this year's Tour he was wearing standard issue Movistar socks which has to be seen as a missed opportunity. 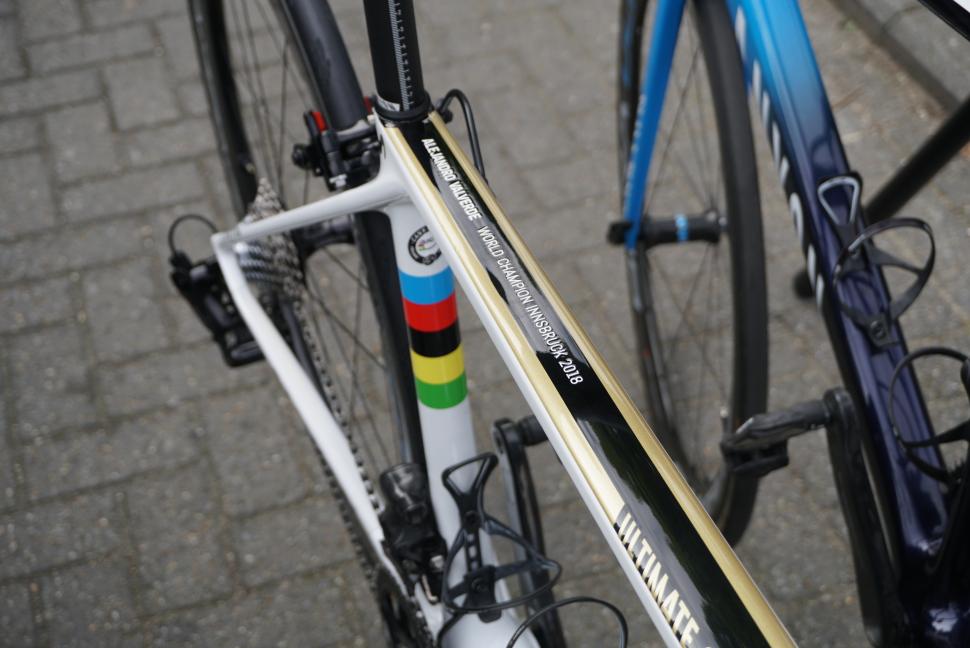 If all of those subtle hints escape your notice, there's also "Alejandro Valverde, World Champion Innsbruck 2018" emblazoned on his bike's gold top tube. 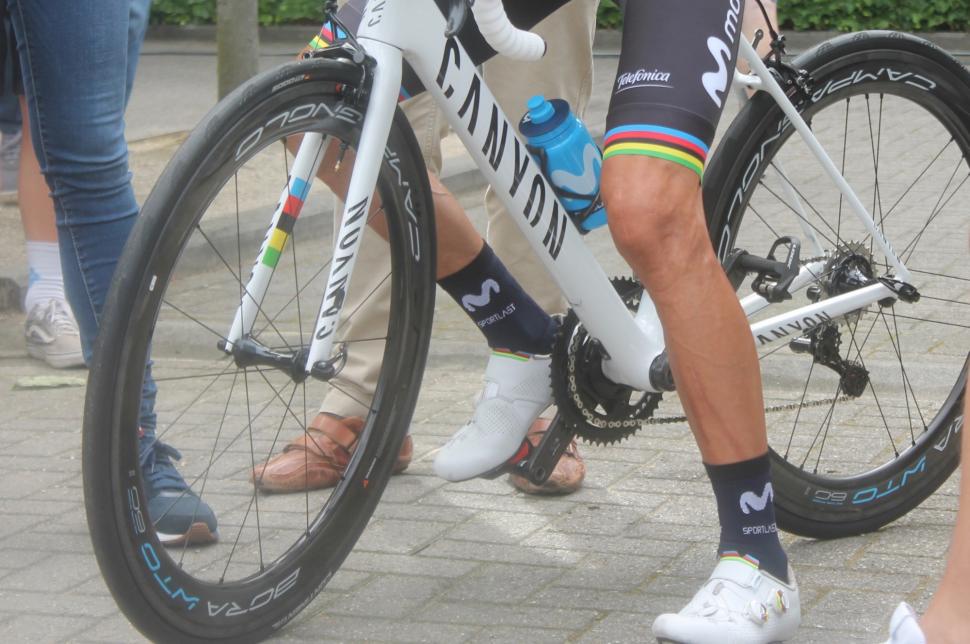 Check out our complete guide to Canyon's 2019 road bikes

Unlike the Canyon Aeroad that's all about aerodynamics, the Ultimate CF SLX is Canyon's lightweight race bike with some aero features. The last update to the rim brake version of this bike was added to the UCI's List of Approved Models of Frames and Forks back in March 2015, which is a long time in World Tour tech terms. We've been expecting an updated Ultimate CF SLX for a while now. 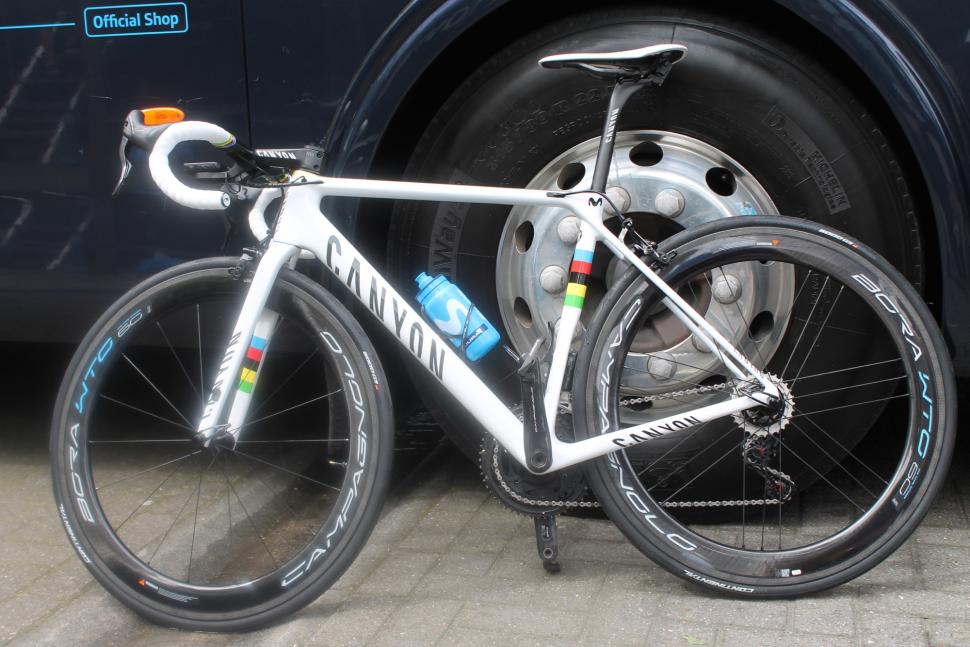 The Ultimate has a D-shaped down tube profile with a rounded leading edge and a truncated rear. Compared with the previous generation Ultimate, the profile is narrower with a rounder nose, which is designed to decrease airflow separation by ensuring the air sticks to the tube.

Making the down tube narrower has an impact on stiffness, though, so Canyon developed a box section top tube and wider seatstays to provide the necessary frame stiffness. 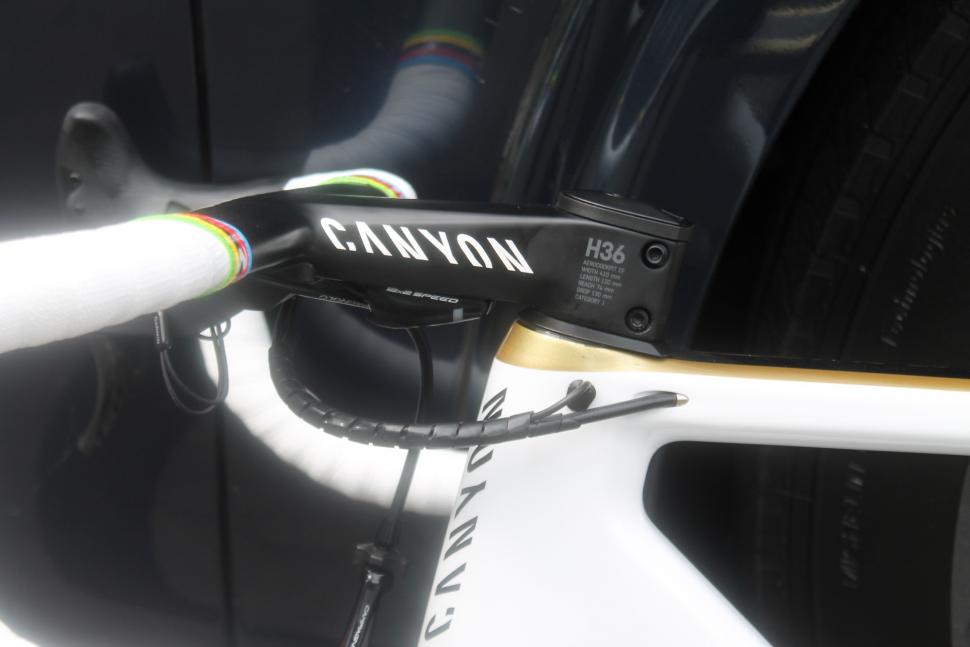 Valverde's bike is fitted with Canyon's carbon H36 Aerocockpit with a 410mm width and a 120mm stem section. The reach is 74mm and the drop is 130mm. This combined handlebar and stem is designed for aerodynamic efficiency, hence the squashed profile to the top section which reduces the frontal area slightly. It's a modified version of the Trident shape that Canyon uses elsewhere in its range. Valverde has the bar positioned as low as possible without any headset spacers. 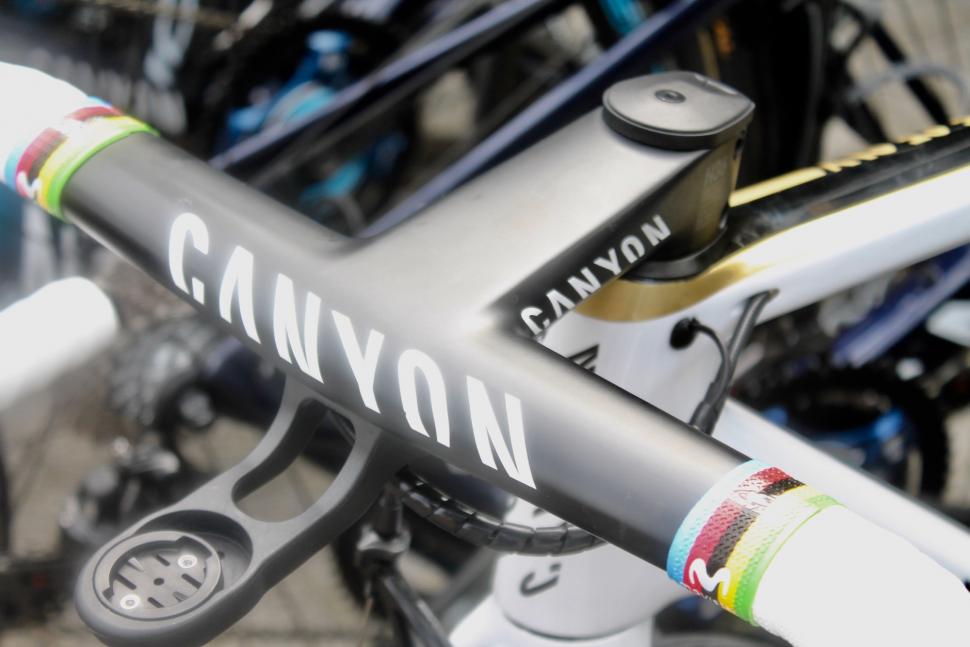 A step in the moulding means that there's a virtually seamless transition from the bar tape to the bar tops. These bars are wrapped with Lizard Skins tape with rainbow tape to finish. 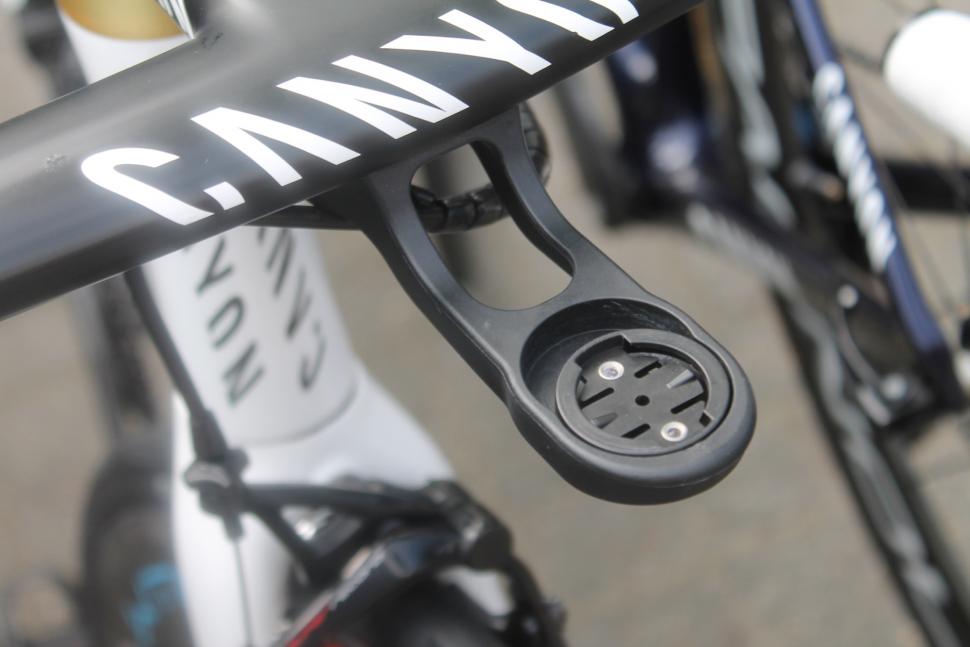 There's an out-front mount for the Garmin bike computer. 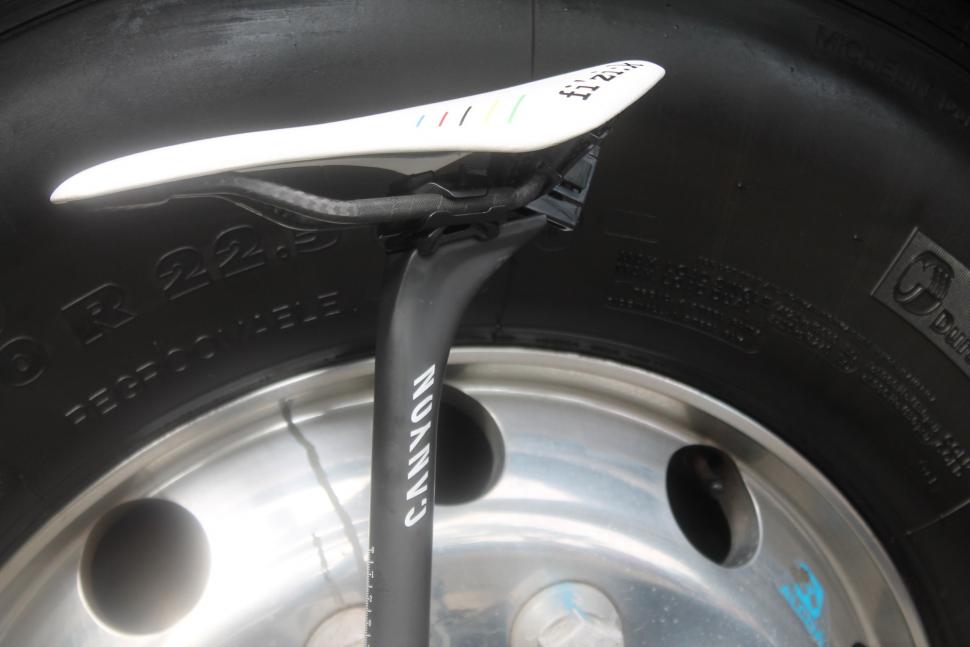 Canyon's S13 carbon seatpost is designed to provide a little give to help smooth the ride. It's topped by a Fizik Antares 00 Iride saddle that is pushed as far forward as possible on its carbon rails. 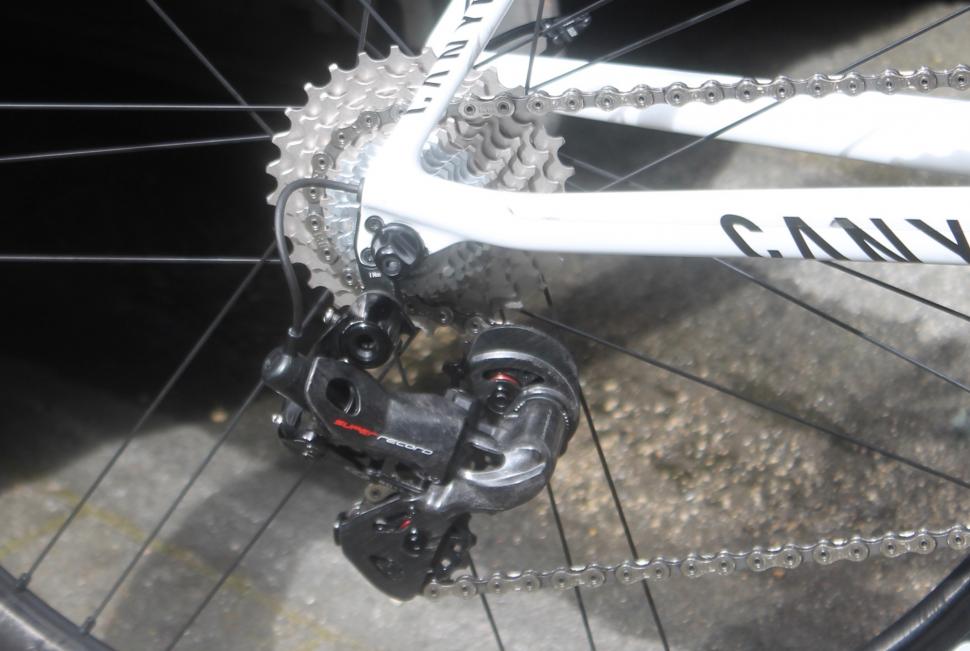 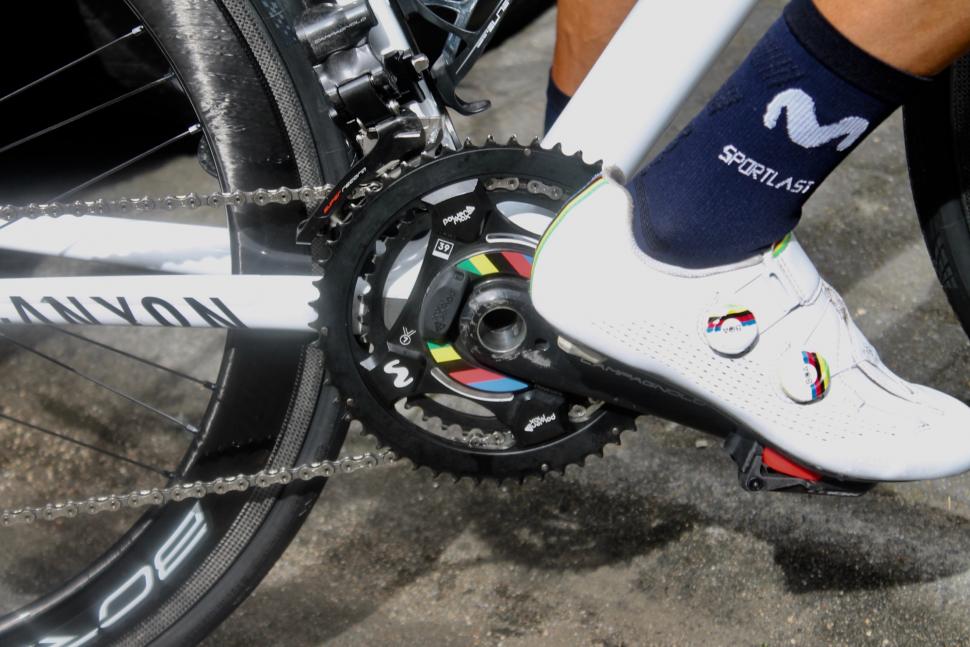 Valverde has 53/39-tooth chainrings fitted here, with an 11-29-tooth cassette. 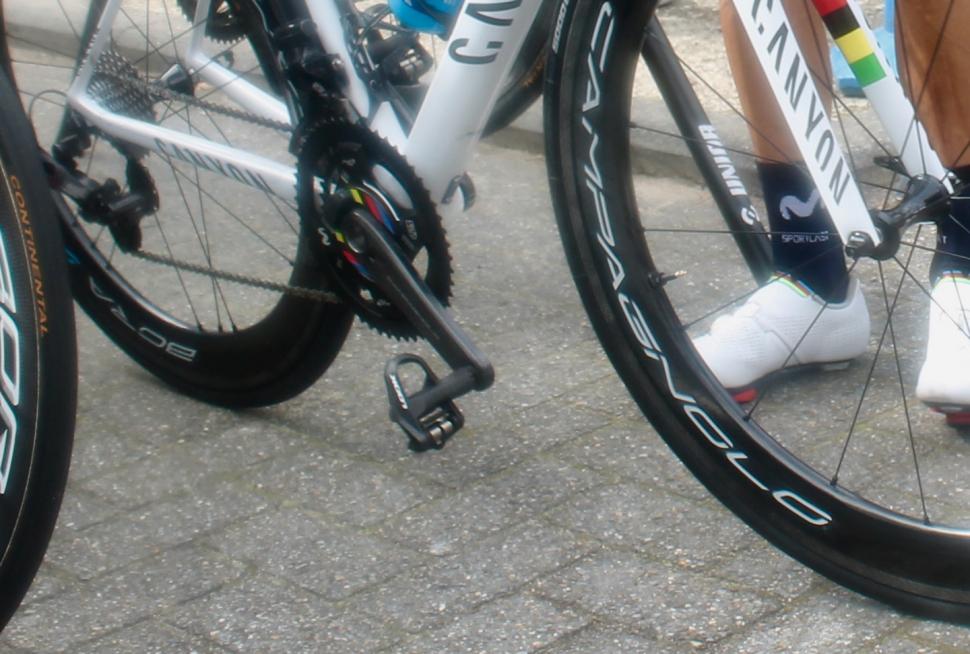 He uses Look Keo pedals but not the Blade version that you generally see in the pro peloton. Rather than having a strip of carbon-fibre to provide the snap around the cleat, these use more traditional coil springs. 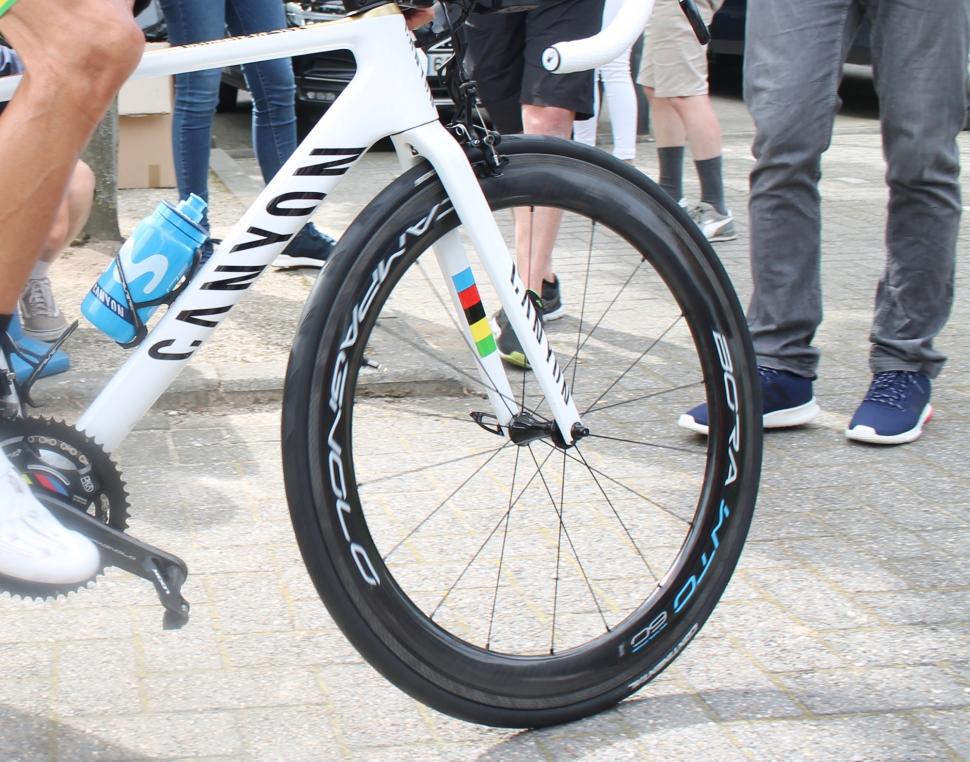 Campagnolo supplies Movistar's wheels, this bike being equipped with Bora WTO 60s. WTO stands for 'Wind Tunnel Optimized' which tells you that the focus here is on aerodynamics. Rather than taking the tubular tyres that you'll usually find in pro racing, these are available in 2-Way Fit only meaning that they can be used with standard clinchers and inner tubes or with tubeless tyres. Valverde is using Continental's Grand Prix 5000 TL tyres and those are tubeless valves. 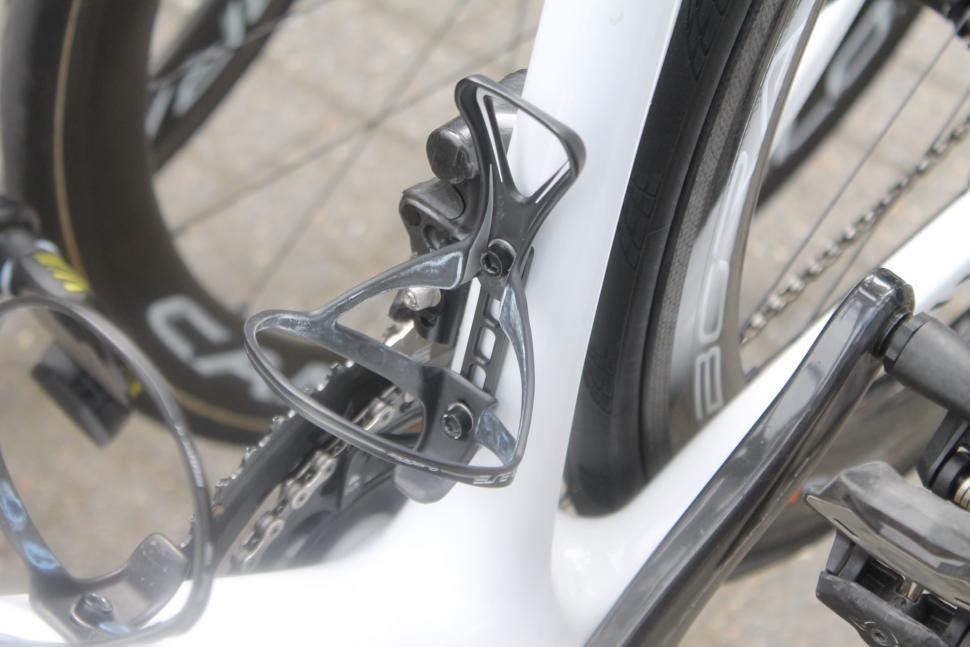 The bike is equipped with Elite Leggero carbon bottle cages. 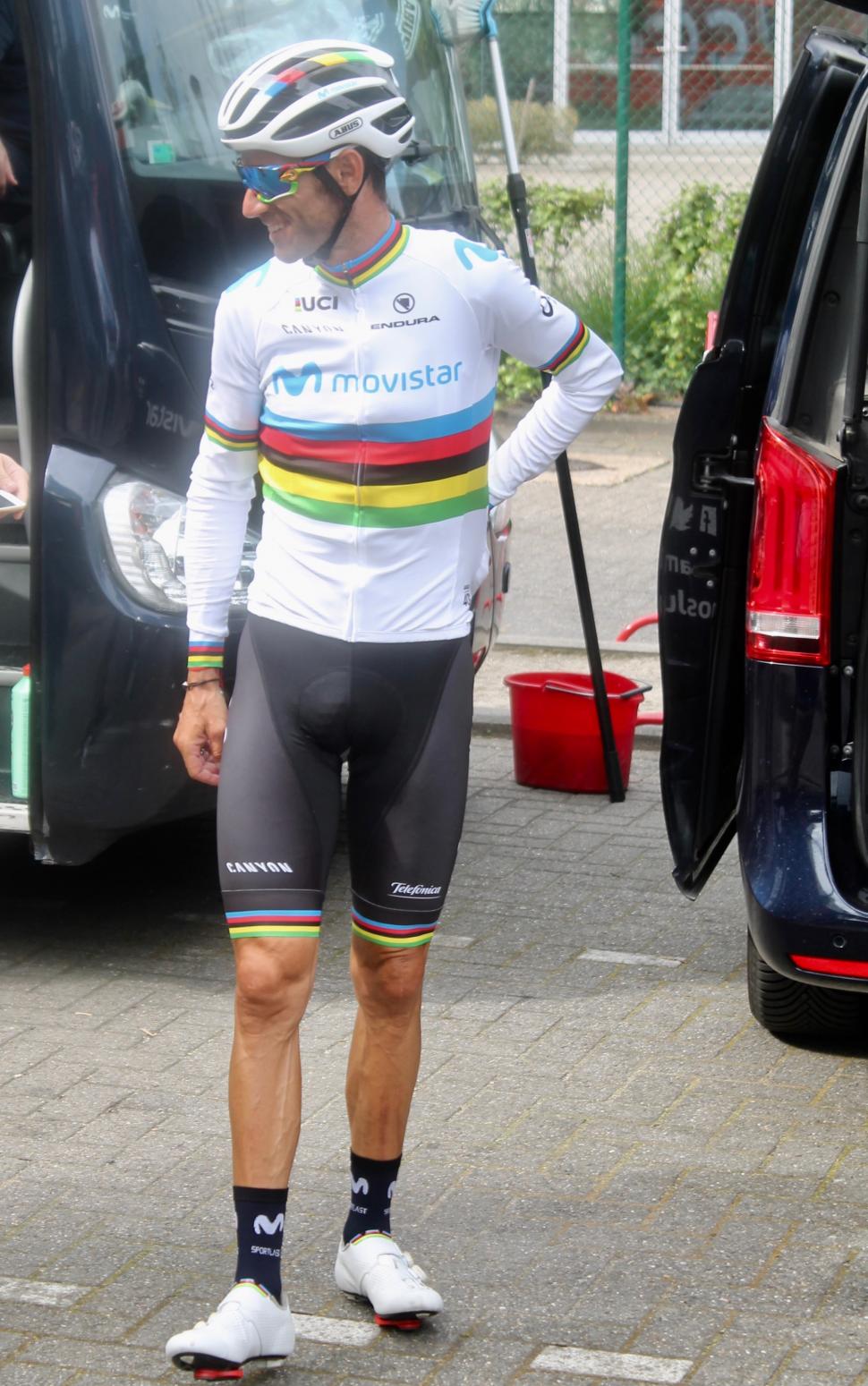 Movistar's clothing comes from Scotland's Endura while Valverde is here wearing an Abus Airbreaker helmet which provides loads of ventilation in a low profile package. The glasses are Oakley Jawbreakers. 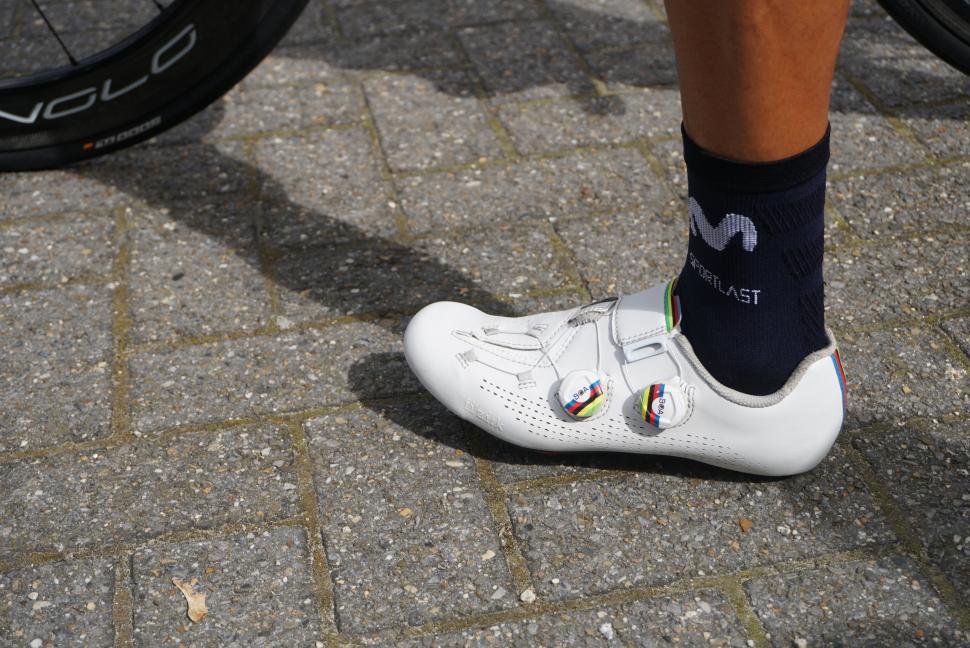 Valverde wears white Fizik Infinito R1 shoes with a rainbow trim on both the tongue and the heel. Even the Boa dials have been given the rainbow treatment. Although you can't see it in our pics, the inner face of the upper bears the inscription 'El Bala World Champion' – 'El Bala' meaning 'The Bullet', Valverde's nickname. 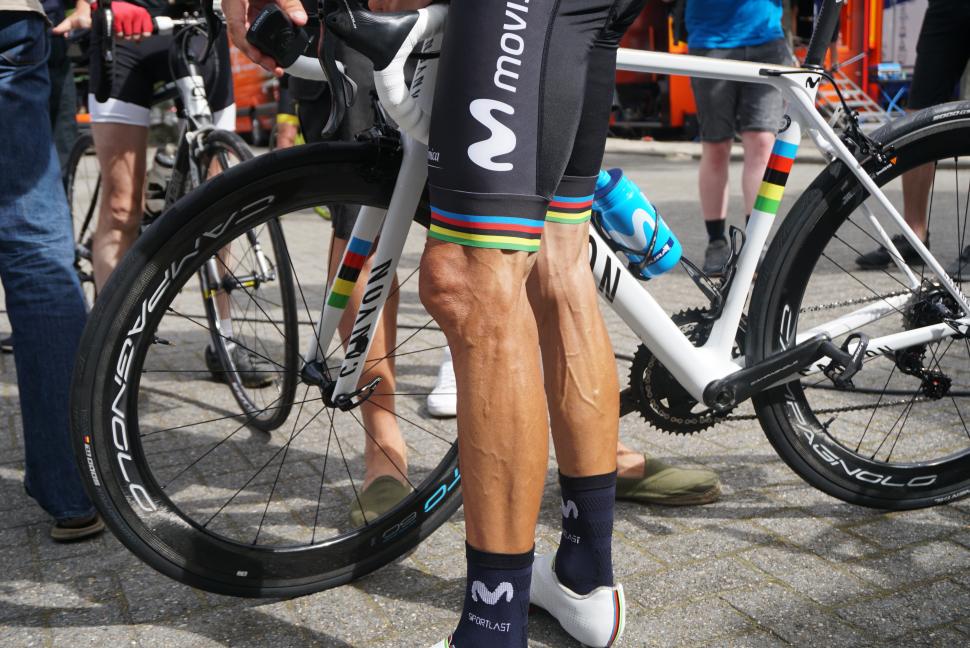 Valverde says that he has lost 5kg for the Tour. Judging by his legs, he's not carrying a whole lot of body fat!

We'll have lots more tech from the 2019 Tour de France here on road.cc over the next three weeks.