SRAM sponsors two teams in the 2019 Tour de France peloton - Katusha-Alpecin and Trek-Segafredo - and they’re both using the US company’s newest Red eTap AXS 12-speed disc brake groupset. Only the Trek squad have got some new cranks that we haven’t seen before which suggest the company is trialling some new gear ratios.

The development of the new Red eTap AXS groupset wasn’t really just about adding another sprocket, SRAM introduced a whole new approach to gear ratios. A smaller 10t sprocket on the cassette allowed SRAM to decrease the size of the chainrings, with a 50/37t the biggest it offers as standard.

Let’s give you some numbers for context. That top gear of a 50x10 equates to 131.50 gear inches. For comparison, a conventional 53x11 is 126.76 inches. In other words, SRAM’s new groupset provides a taller top-end than regular groupsets. But for some reason, a few of the Trek-Segafredo riders, including general classification hopeful Richie Porte, was spotted on a non-standard chainset. There are two things we can observe. The first is that it’s definitely a bigger chainring; we count 53t teeth on the big ring, but some of the teeth are obscured by Porte’s foot.

Why would they want a bigger chainring if the groupset already provides a taller top gear? It could simply be a case of the pros preferring to stick with tried-and-tested equipment and gear ratios - pros are notoriously and perhaps rightly risk-averse when it comes to embracing new tech.

It could be to do with efficiency. The efficiency of a drivetrain is generally understood to be improved with the use of larger sprockets and bigger chainrings because put simply, the chain isn’t rotating as extremely as it does on sprockets with fewer teeth.

But how much difference might it make? SRAM told us it tested the efficiency in its own lab and found the difference to be so small it’s not even worth worrying about. However, the Human Power Technical Journal said: “it was found that larger sprockets provide more efficient transfer of power while smaller sprockets proved to be less efficient.” 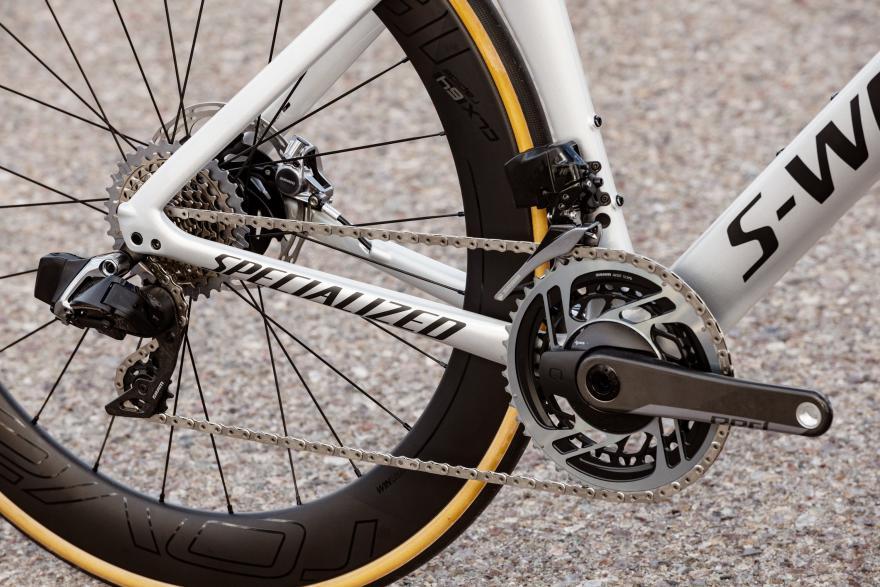 In the world of professional cycling, even if it’s a difference of 1-2 watts, it could be enough to warrant this deviation from SRAM’s off-the-shelf chainset.

The other observation is that this crankset isn’t a one-piece design like the regular Red crankset, which has the power meter integrated into the chainring. That means you can’t replace one or the other without replacing the whole lot.

We could speculate, and that’s all we can do at this stage, that the team wanted more flexibility and to be able to swap out chainrings, something which the new crankset would offer. There’s still the new Quarq Dzero power meter at the centre, integrated into the crankarm.