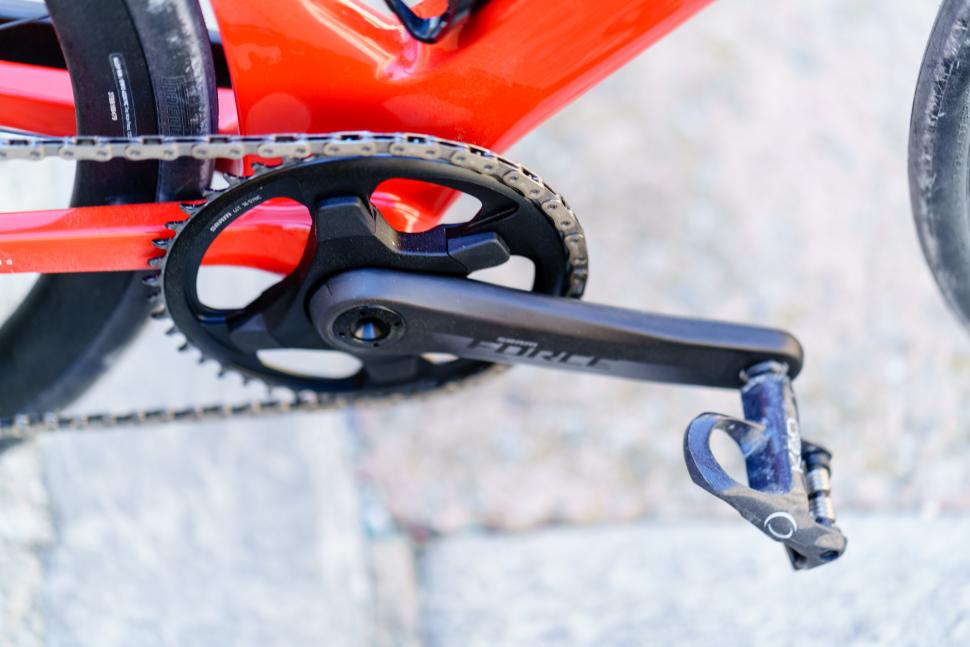 Are the benefits of 1x outweighed by the disadvantages? We asked, you answered

There's a lot of talk about 1x but do you want it on your bike?
by David Arthur @davearthur

We asked, you answered: Are the benefits of 1x outweighed by the disadvantages? And the results, well they are mixed, but one thing is clear, it’s an issue that divides opinion.

Why are we even talking about 1x on road bikes?

It’s the latest influence from the mountain bike world, along with geometry, disc brakes, wider tyres, threadless headsets, thru-axles, 650b, tubeless and suspension.

A couple of years ago the hot debate in road cycling was disc brakes, but now it’s all about how many chainrings you need and the future of the front mech. Mountain bikers have mostly ditched front mechs and two chainrings, and gravel riders aren’t far behind them, and some people and manufacturers have been experimenting with 1x on road bikes.

It’s fair to say the results have been mixed. Probably the most high profile saga to shine a spotlight onto this debate was the ill-fated Aqua Blue Sport. Backed by 3T with its radical Strada, a bike entirely built around wide tyres, disc brakes and a 1x drivetrain, there was no way to fit a front mech.

While that team might have folded, there are still some attempts to bring 1x to to the pro race peloton. Trek-Segafredo has been trialling SRAM’s new Red eTap AXS groupset in 1x, and Mads Petersen is reportedly a fan. It all went very badly wrong for John Degenkolb though, as he dropped his chain in the final kilometres and wasn’t able contest the sprint.

For balance, it’s not like 2x isn’t without its issues. Wout Van Aert apparently got his chain jammed between the two chainrings on his Dura-Ace Di2 groupset whilst tackling the pivotal Arenberg cobbled sector in Paris-Roubaix recently, highlighting that mechanical issues can occur with any groupset. He was forced to swap bikes with a team mate. 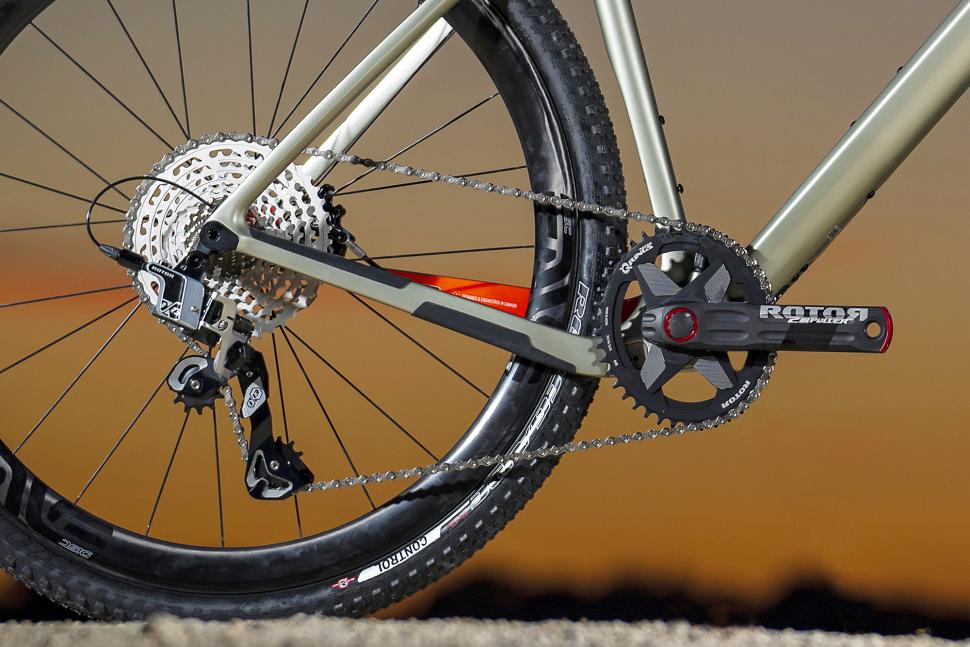 - 22 road, gravel and cyclocross bikes with 1X gearing – can one chainring do it all?

So what are the benefits to 1x and why is there so much interest in developing it when for the most part, 2x drivetrains have worked just fine for many years? Proponents of 1x speak of simplicity with one less component to fail, reduced weight and improved aero. But against it are complaints of reduced range and bigger gaps between the sprockets making it trickier to maintain a desired cadence.

So should we just leave it with the mountain bikes and gravel bikers or are the rewards worth the current trial and tribulation? At this point we hand over to the road.cc audience.  Here are some of the replies to the question we asked on Facebook, Twitter and Instagram. If you’ve got an opinion do please share it in the comments down below.

Andy Jackson 2x for everything has you covered.

iain_worrallo​ As soon as they can cram 22 cogs into a rear cassette, I'll try it.

mikecassie Hmm I’m not convinced, I’ve got it and it’s great for off road but when I’m on road mode I find the gearing jumps a bit big for me. I need the range too so…

Craig Hudson Love the benefits of all the range on one and cutting out the crap front shifter. Yes I get a few bigger jumps but it's far more efficient and reliable in my riding.

Steven Smith I've done this in my mountain bike. The answer is yes. One of the best things I've done.

Neil I agree it's not for the pros, but I've done Ventoux on 1x and doing faster speeds on my @3Tbike Strada than I ever did on my Trek Madone, makes me a believer that it can work for the masses. Don't knock it til you've tried it.

Marcus Elliott It very much depends. I'm comfortable at a range of cadences between 90-110rpm so I don't worry about the gaps in gears. All 3 of my bikes are 1x, but I think choosing appropriate chainrings and gears for the conditions and your abilities are more important.

Simon Tuck I was set on 1x for my new road bike. Ended up going with 2x because I do ride in groups quite a lot and the smaller jumps in ratio make it easier to settle on pace. If 1x was actually cheaper it would have been a no brainer though.

phuddy68​ The range of gears is fine, that’s not the problem with a 1x setup. The problem is that the jumps, on the current 1x11 are just too large; you’ll often find yourself ‘missing’ that perfect gear when trying to emulate a road bike. I found this out first hand after swapping some 28c tires onto my gravel bike and trying it out. The gearing as it has been isn’t right for road riding but I’m curious to see if the new 1x12 or the rotor 1x13 can make the sacrifice small enough that the 1x option becomes a viable alternative.

Alan Brenton It's not about range so much as the ability to fine tune cadence through greater ratio choice. I'd certainly consider it on a utility bike or heavy duty tourer though where simplicity might be more important.

Eric von Eckartsberg I’m mainly a gravel, mtb, and daily commute rider, and I have 1x on all my bikes. Used to ride some single speed, so 1x is a luxury now. If I was a true roadie I’d probably stick with a 2x, but the simplicity of 1x is worth it to me.

Ian Stuart It’s a answer to a question I never asked myself, fit what I need I’ll stick with 2x.

Ryan Maynard Eames Rode 1x for years, always chasing for the right gearing and never found it until I went back to 2x11.

Ollie Howe CHOICE. Is what we want. I have both 2x and 1x. Love them both for different reasons. Personally I think 1x makes a lot more sense on a gravel bike or off road machines. Just look at the MTB world. Road bikes, however require a little more fine tuning in gearing and setup. It’s a much more precise world of accurate bike fit, correct cadence and number crunching, so I can also see why most people would opt for 2x on the road with much closer and precise ratios

Soeren Kuehling have sram rival 1x on the commuter bike, able to do 43kph on a flat road and more than enough gears (ratio) for hills..rolling on 35mm tyres

robscoths I've just come back from a fortnight riding a 1x in Mallorca. With a bit of pre-trip gear calculations online, I was able to get the same range as my old standard chain ring set up. Generally, riding solo was fine, once you get used to the bigger jumps between gears you can tailor your style a bit. The going only got tough on fast descents or pacy chainys. I'd spin out on the descent or get uncomfortably stuck overgearing when coming through for a turn.

Morgan Brown I doubt any of the above comments are from riders who own 1x bikes, but I have riden 1x in all sorts of terrain and I have just ordered another 1x bike. The advantage is that you don't have any duplicate gears, you don't have to have a front mech or double or triple chainsets so you can have a lower Q factor.

Chris Fanning When are Shimano going to make a 1x road groupset? It would really help at the budget end of the spectrum because STI levers and chainsets are the expensive and heavy bits. 46T x 11-34T is enough for most road bike buyers and it would be lighter, have a better chain-line most of the time, and be lower maintenance/fighter reliability. We're not all pro peloton riders!

It’s clear the topic of 1x is one that divides opinion. Some people can see the advantage while many can’t see why there’s any point in switching from current 2x, some have embraced it for commuting and gravel bikes but prefer two chainrings on a road bike.

Which camp are you in, for or against 1x? Let’s here it below.