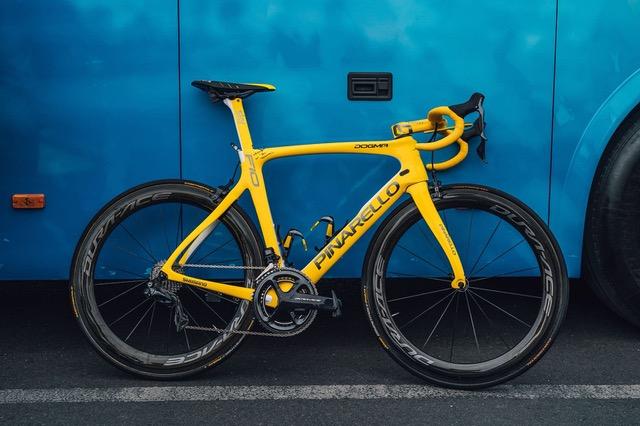 This is the Pinarello Dogma F10 X-Light that Geraint Thomas used to win the gruelling 2018 edition of the Tour de France, painted yellow for the final stage around Paris.

Pinarello must have a whole room full of yellow Dogma F10 frames now, so used is it to success at the world’s biggest bike race. Company CEO Fausto Pinarello likes to get out the permanent marker and write a special message on the final stage frame, and here he is doing that.

The Dogma F10 X-Light is about 60g lighter than the standard Dogma F10 thanks to a slightly more expensive carbon fibre layup, but it has the exact same tube profiles as the standard bike. 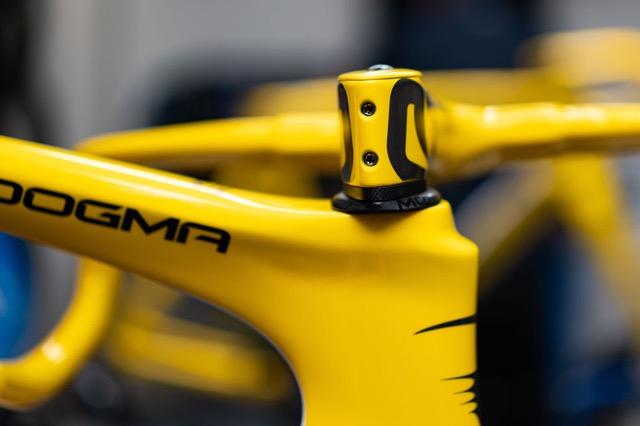 Team Sky still uses Pro handlebars and stems but Thomas has the one-piece Talon handlebar made by MOST, the component brand owned by Pinarello. It offers improved aerodynamics over a standard handlebar and stem. Thomas chooses a 130mm length stem and for his ride around Paris, the whole lot has been dipped in yellow paint.

The Dogma frame was adorned with the latest Shimano Dura-Ace Di2 R9150 groupset. As far as we know, it was faultless in 3,351km of racing. Thomas rides 175mm length crank arms and has a 53/39t chainset with a wide-range 11-30t cassette on this bike.

Team Sky uses wheels from Shimano too, this bike fitted with C60s that are designed to give an aero advantage without too much of a weight penalty.

Shimano is the most dominant groupset manufacturer in the professional peloton. All three podium finishers rode Shimano and Peter Sagan, Julien Alaphilippe and Pierre Latour, winners of the green, polka dot and white jerseys respectively, were also riding Shimano-equipped bikes. 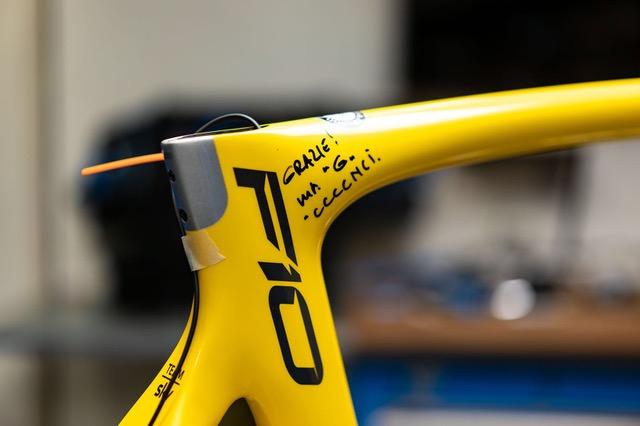 While we saw Peter Sagan and quite a few riders on disc brakes, Team Sky stuck to rim brakes for the entire race. Will we ever see a Tour de France winner on a disc-equipped bike? Let us know what you think in the comments section below.

What saddle does Thomas ride? A Fizik Arione R1, the flagship saddle in the Italian company’s range. The riders choose from several different models.

As well as sponsoring Team Sky, Fizik sponsors Thomas and he was riding the new Infinito R1 Knit shoes, which bring knitted technology from the trainer world to the cycling market. Fizik recently launched an extended range of new colours if black is a bit too boring, and Thomas has been riding the new grey shoes. There are also Petroleum Blue and Yellow Fluoro and Purple and Blue options.

His helmet of choice is the Kask Protone, not the newest helmet in the Italian company’s range, but still a popular choice for its combination of aerodynamics and ventilation. The team had newly painted white helmets, with a black central stripe, but Thomas was wearing a yellow one during his long stint in the yellow jersey. He was also spotted wearing the newer Valegro helmet on some stages.

Is it just us, or does the Dogma look pretty good in yellow?