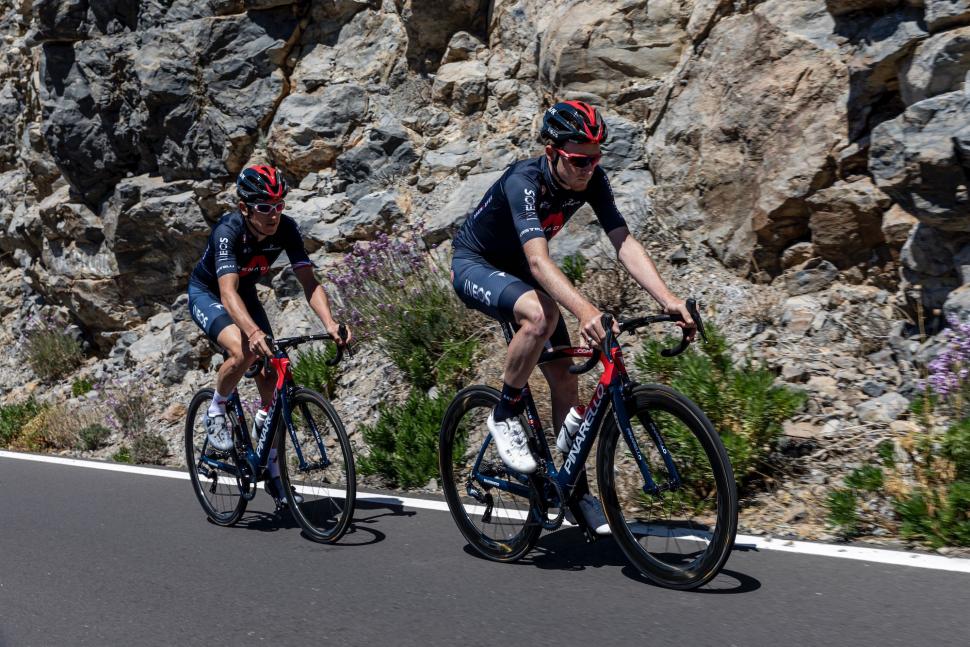 Italy’s Pinarello, supplier of bikes to Ineos Grenadiers, has launched the Dogma F which takes over from the Dogma F12 as its top-level road bike. This is the bike that many people speculated would be called the Dogma F14 when it first broke cover a month ago. 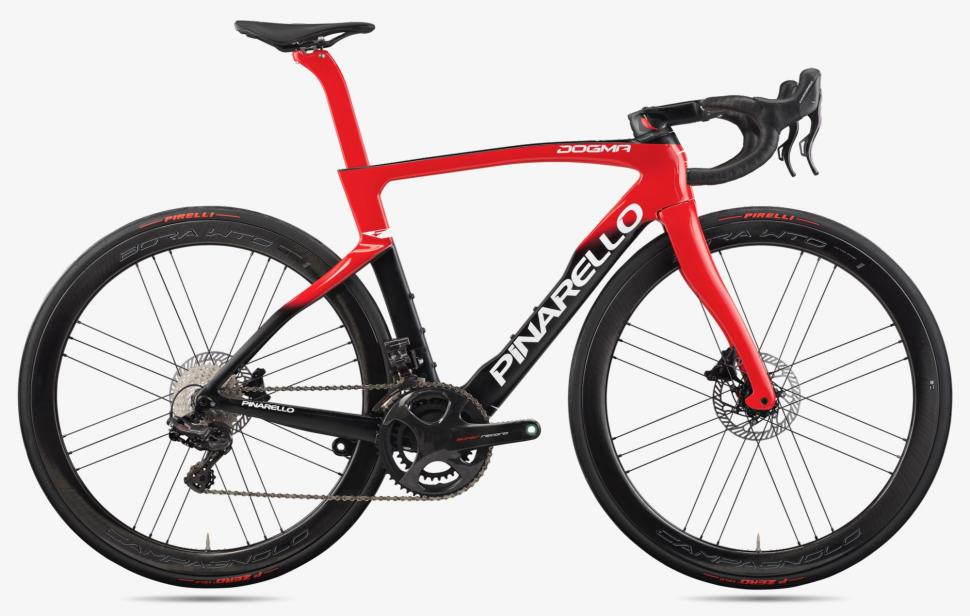 Fancy a few bullet-points on Pinarello’s claims to get up to speed?

Pinarello remains one of the few brands that doesn’t offer a lightweight climbing bike and an aero bike at the top of its race bike range (although Specialized, for example, has moved back in that direction with the Tarmac SL7 that’s designed to provide both light weight and aero efficiency). 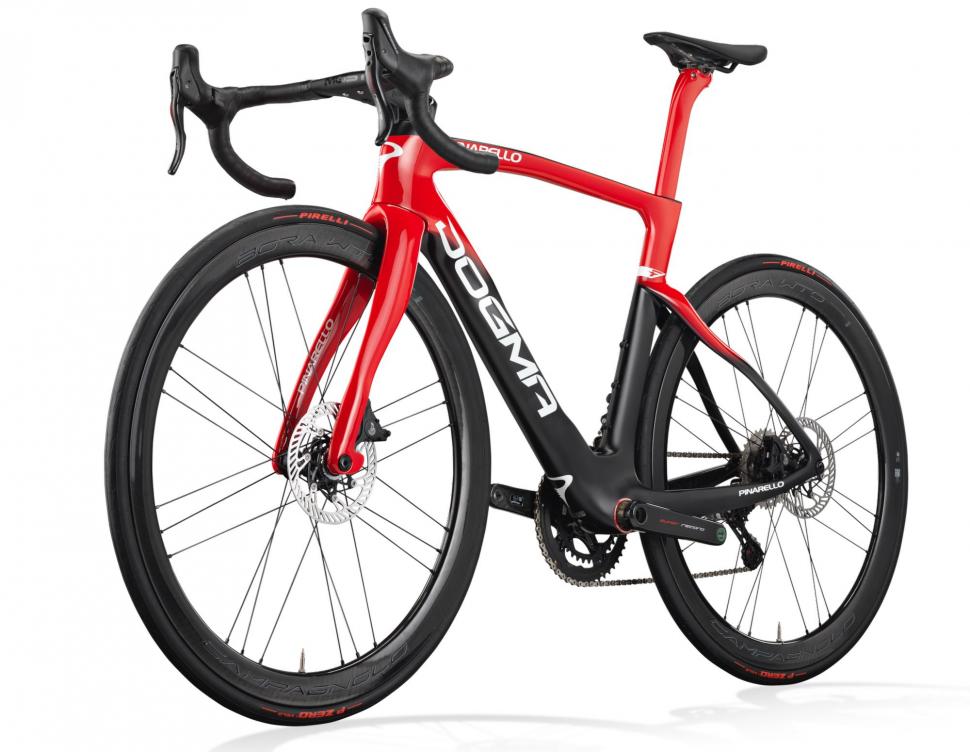 “This is a bike that is perfect for every type of rider and every terrain, because real-world riders aren’t specialised,” says Pinarello. “You need a bike that can climb and descend with equal flair, attack every corner and make every watt count on the finishing straight. The Dogma F is designed to do just that, no matter the circumstances.”

Pinarello says that when designing the Dogma F its priority was on handling rather than shedding weight. 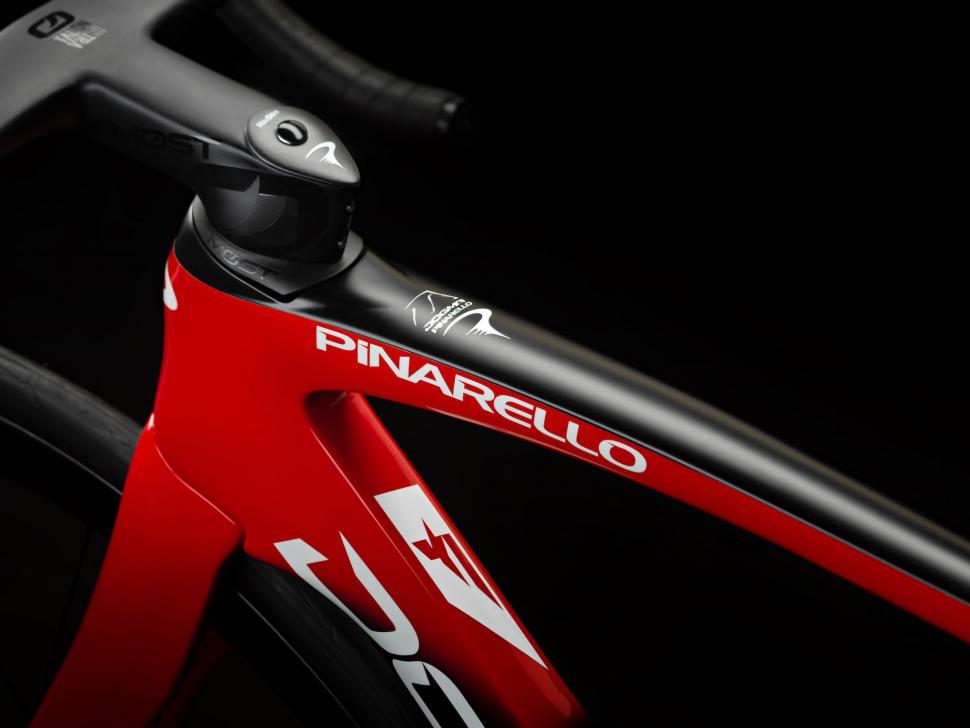 “Yes, the complete Dogma F Disc frame kit is 11% lighter than the F12, but that is a result of our R&D team’s commitment to innovation and new production methods such as 3D-printed titanium componentry,” says Pinarello.

“Close attention has been paid to the seatpost, headset, fork, and the Talon cockpit, resulting in a saving of 265g compared to the Dogma F12, while also being 12% stiffer around the bottom bracket, with improved aerodynamics providing significant watt savings.” 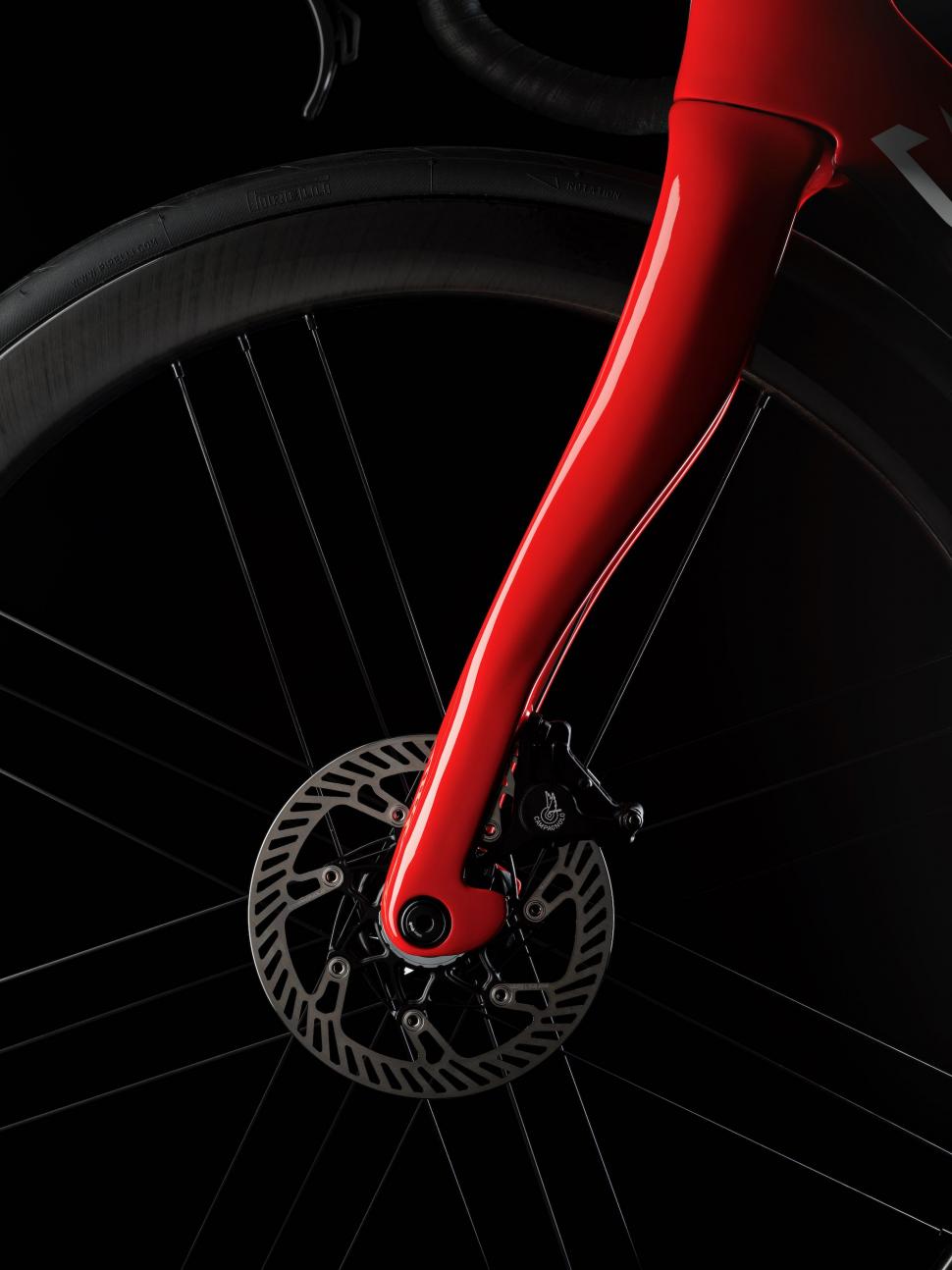 Pinarello says that it designed the updated Onda fork from scratch twice, in the sense that it had to develop both rim brake and disc brake versions. The brand says that it gave the two different versions of the Dogma F equal priority. The fork is said to be 16% lighter than previously, mainly due to new carbon fibre materials available. 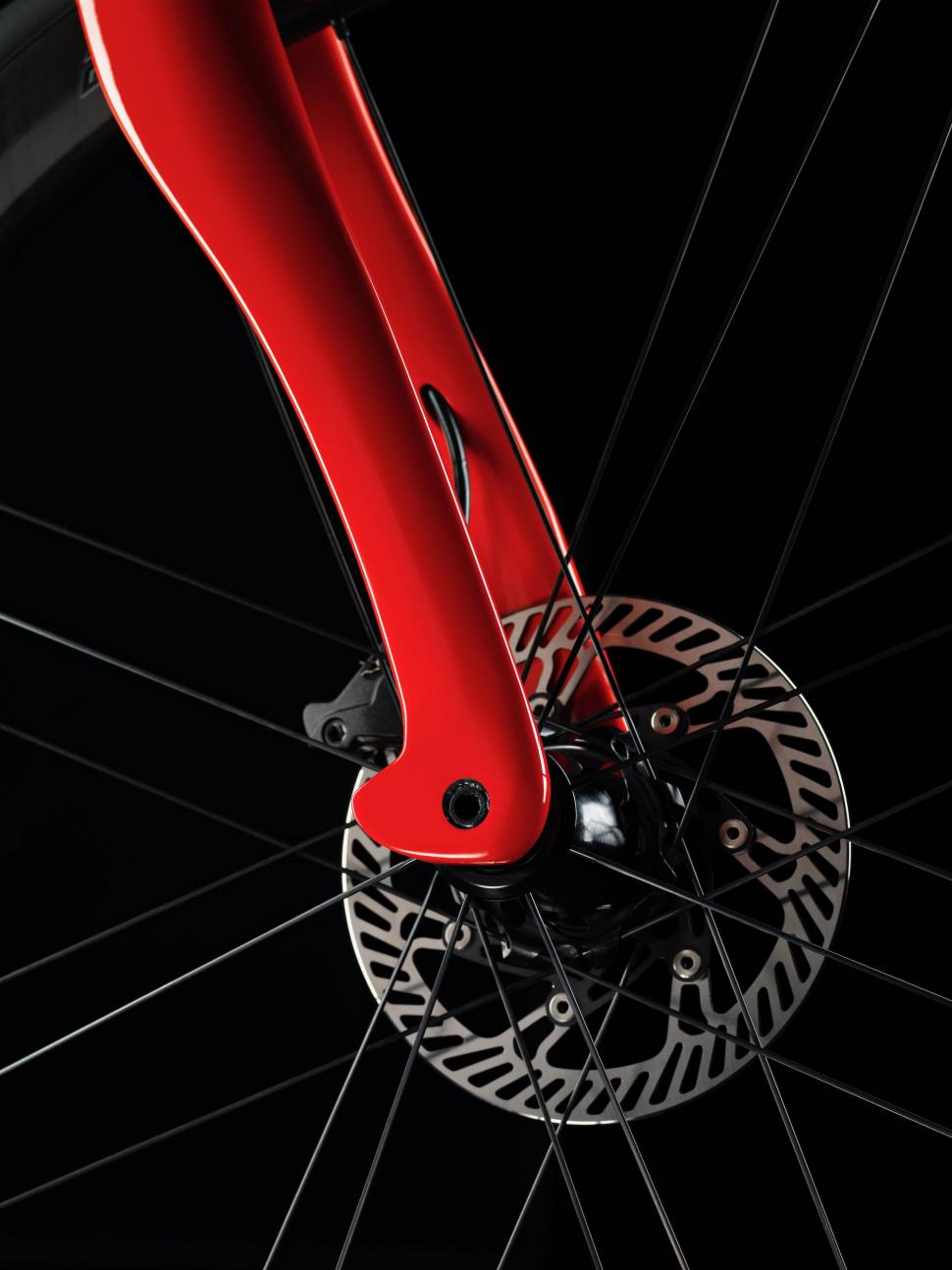 The profile of the disc brake fork has been changed from that of the Dogma F12 to improve interaction with the front wheel.

“Drag is practically non-existent until the air has travelled halfway along the frame,” Pinarello says – which is quite a claim. We’d love to see the statistics that back it up. 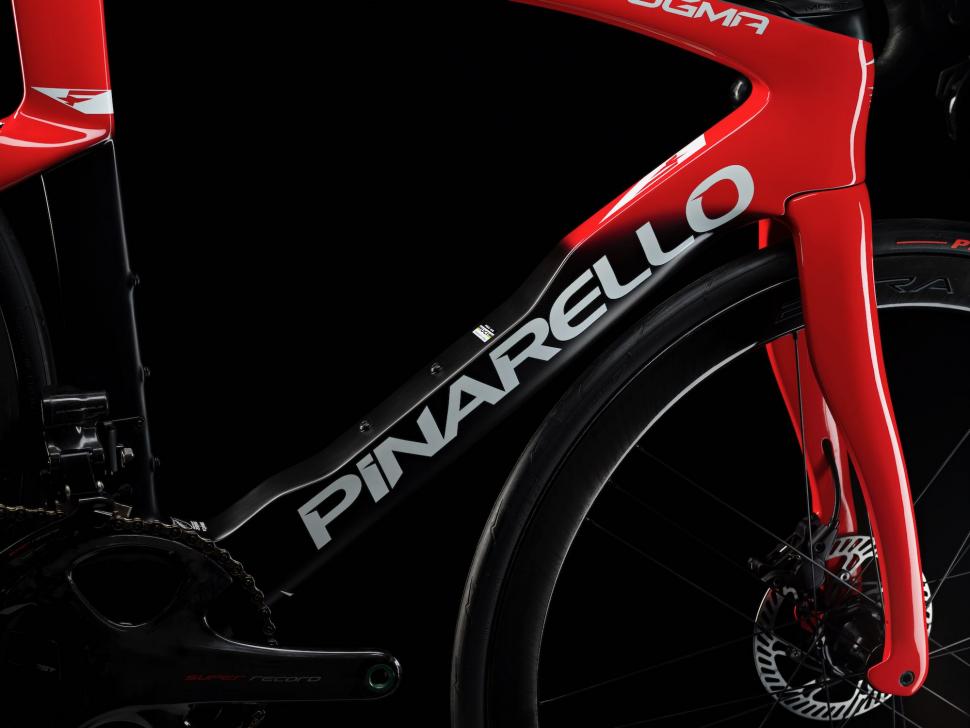 “Thanks to innovation derived directly from the Bolide [Pinarello’s time trial bike], the blades of the new Onda fork actually act as sails that favour forward movement in crosswind conditions – an effect that is amplified as the wind gets stronger." 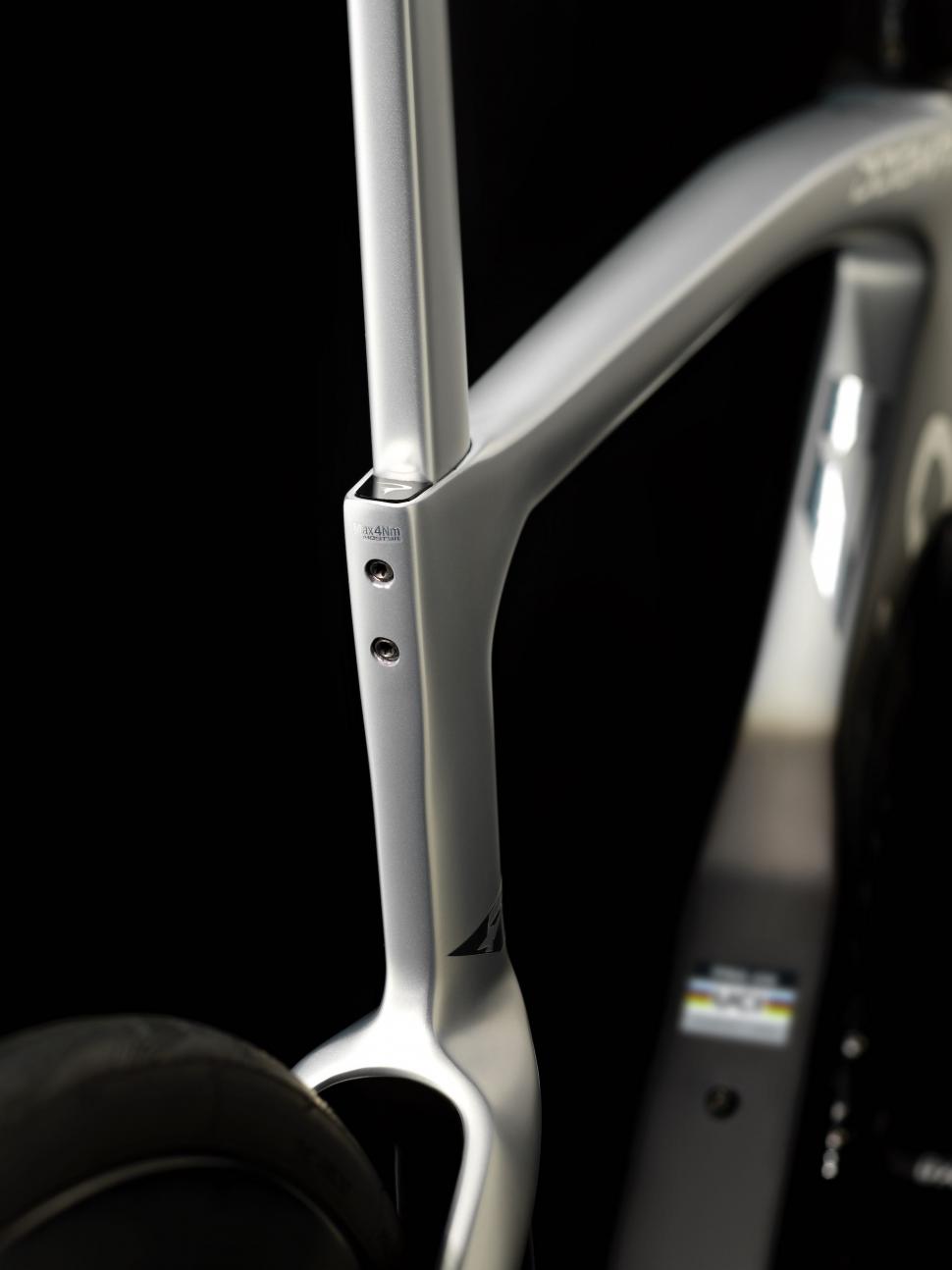 Pinarello says that the Dogma F benefits from a narrower seat tube (just 20mm wide at the top junction) and seatpost taking advantage of the UCI rules for 2021 reducing minimum tube width, and that new down tube cross-sections improve aerodynamics. 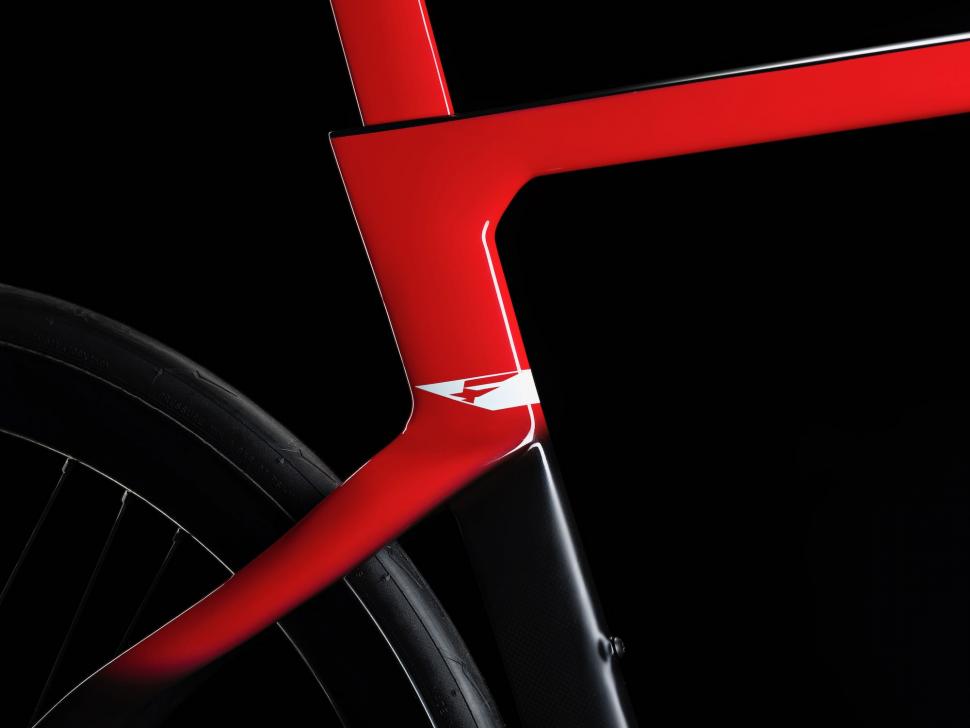 The seatstays use new cross-sections designed to improve airflow with the rear wheel, and they are lowered (they meet the seat tube lower than on the Dogma F12), especially on the disc version, to reduce frontal area.

“The 15mm clockwise rotation of seatstays increases the bottom bracket stiffness to compensate the loss from the reduction of the seat tube width for the aero and lightweight seatpost,” says Pinarello.

The frame takes 1 1/2in headset bearings and a threaded bottom bracket. It’s built for electronic groupsets only and you still get two different positions for the second bottle cage. The maximum tyre width you can use on either the disc brake or rim brake version is 28mm, whereas many other recently launched road bikes allow for wider tyres.

“Every detail of the Dogma F has been refined for improved airflow, from the improved front fork section that cuts through the air to the new rear triangle that channels airflow harmoniously out the back, making it 4.8% more aerodynamic in the disc version compared to the Dogma F12.” 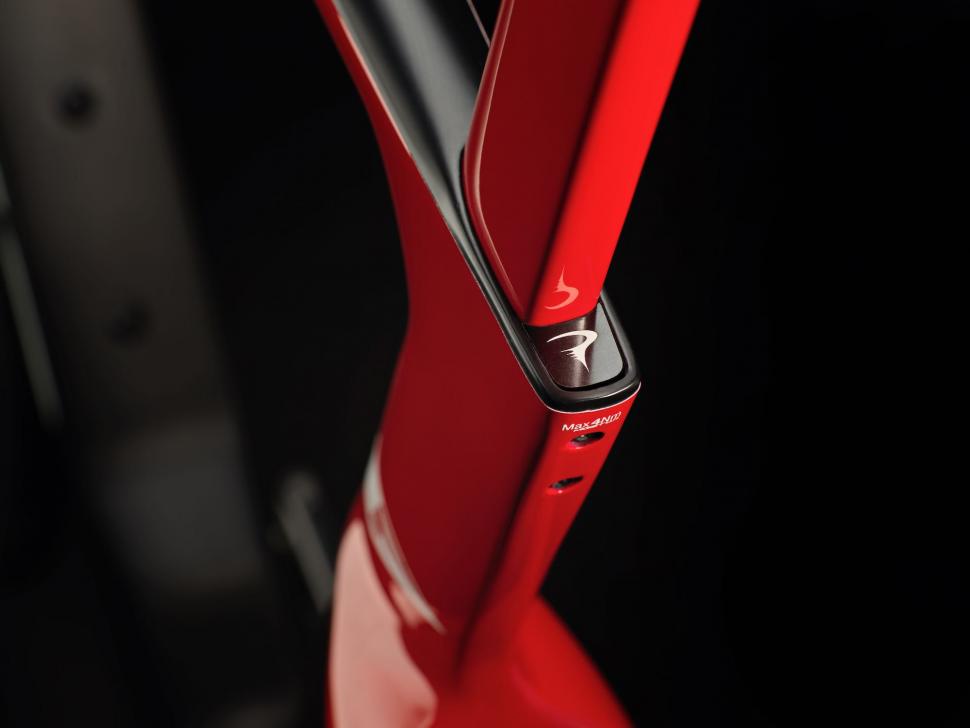 Interestingly, Pinarello says that the disc brake version of the Dogma F has lower drag than the rim brake model – 7.3% lower if you consider just the frame and fork. The difference is far less dramatic when you take the complete bike plus the rider into account; in those circumstances, the disc system has an advantage of just 0.2%.

As previously, Pinarello uses TORAYCA T1100 1K carbon with Nanoalloy Technology for the Dogma F. According to Japanese manufacturer Toray, “Nanoalloy technology is an innovative microstructure control technology… that can bring about dramatic improvement in characteristics compared to existing materials by minutely dispersing multiple polymers on a nano-metric scale. 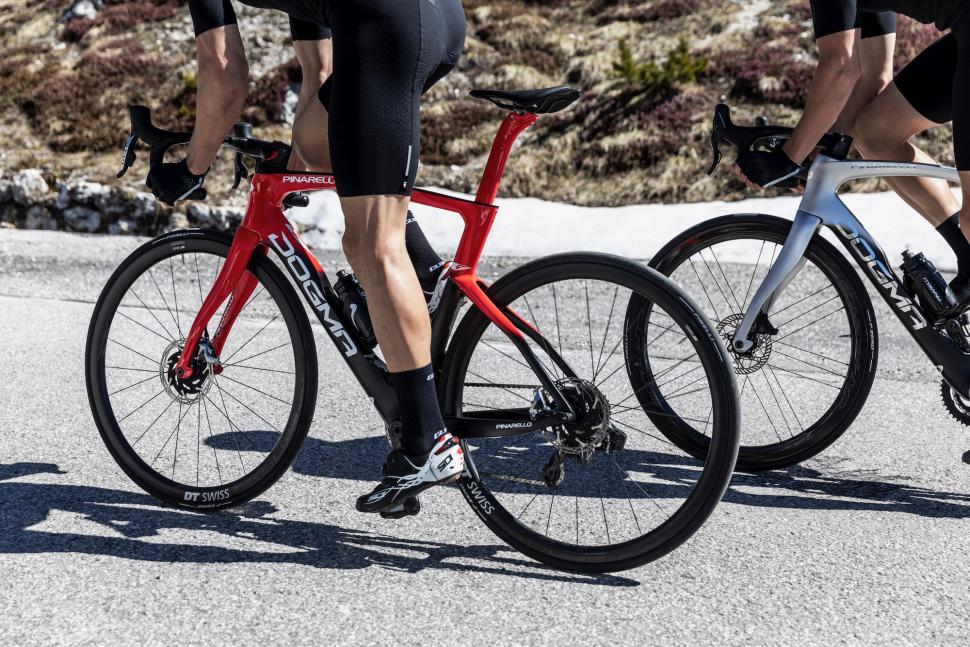 The technology enables high performance and functionality in polymers which could not be achieved in conventional alloys of micron-metric scale (one-millionth of a metre).”

Pinarello has stuck with the principle of asymmetric frame production here on the basis that the two sides experience different forces. Pinarello modifies tube profiles and adds reinforcing carbon to take account of the drivetrain’s positioning. 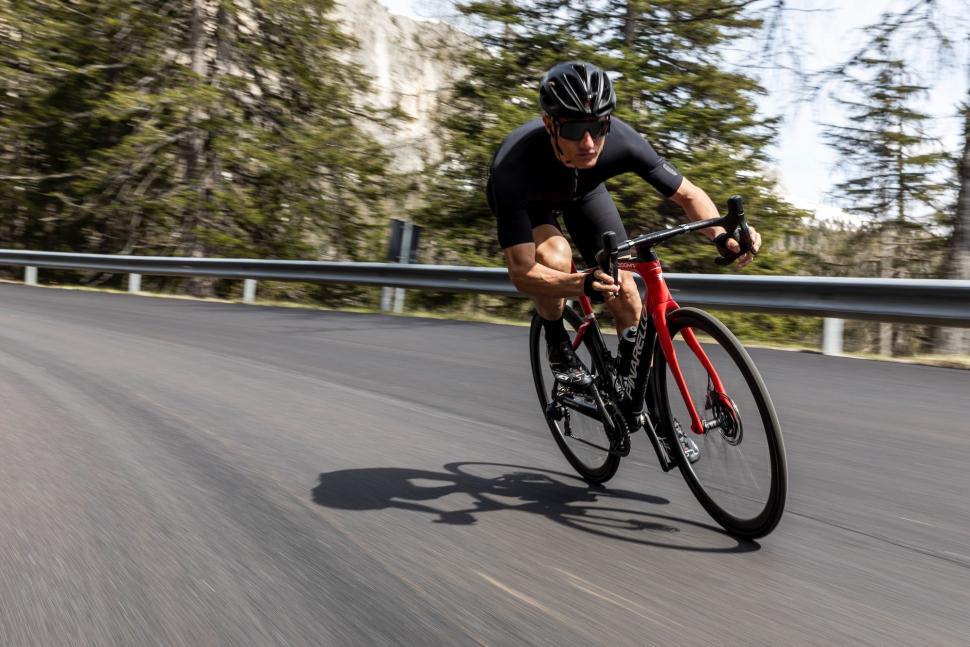 Pinarello says that the seatpost design has been modified to reduce weight and drag (down by 30% compared with the Dogma F12). The clamp is now made from Selective
Laser Melting (SLM) titanium to drop the weight further. 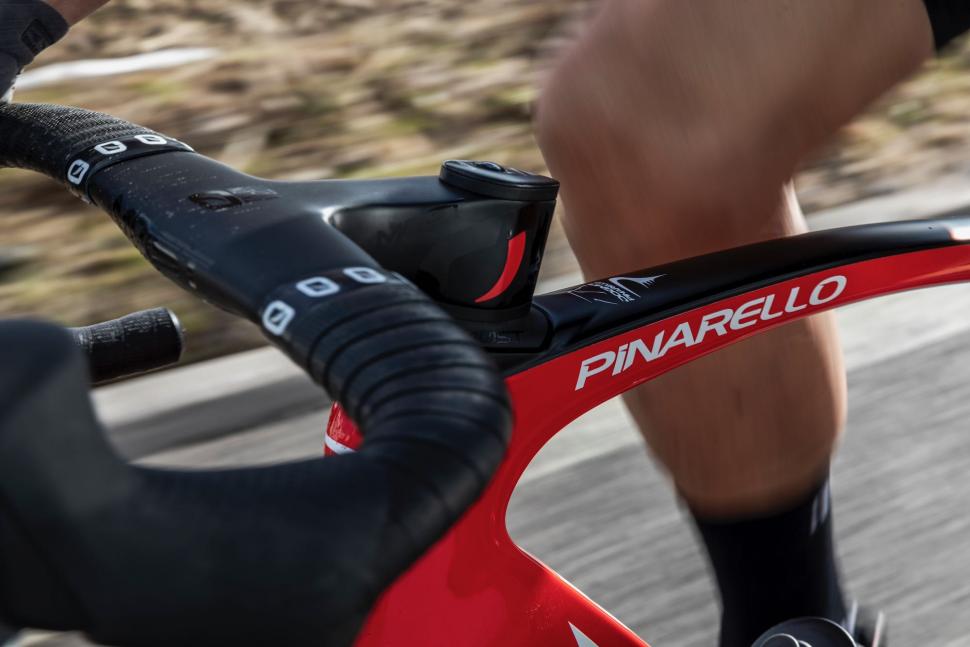 The Talon Ultra handlebar is said to be the same shape as previously but 13% lighter and just as stiff thanks to a new carbon layup. 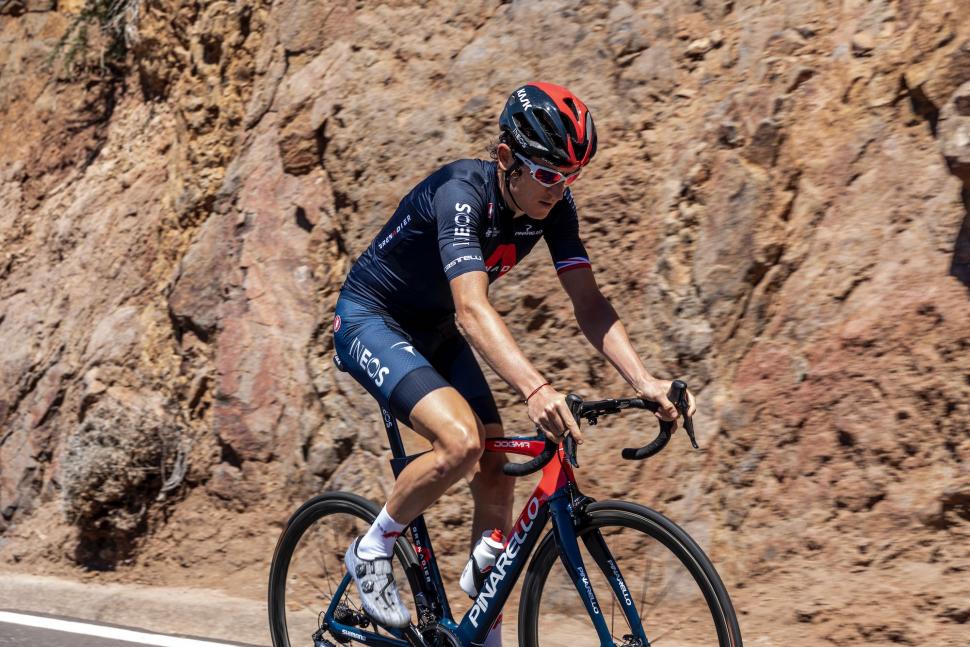 Pinarello claims a raw (unpainted) frame weight of 865g (size 53). It says that a built-up disc brake version of the Dogma F is about at the UCI’s 6.8kg minimum weight limit for racing. The Dogma F Disc (size 53, no pedals or bottle cages) built with a Shimano Dura-Ace Di2 (9100) groupset and DT Swiss ARC1400 wheels is said to be 6.8kg (no pedals) while a SRAM Red eTap AXS build with DT Swiss ARC1400 has a claimed weight of 6.9kg. A rim brake version of a similar level would be below the UCI's weight limit. 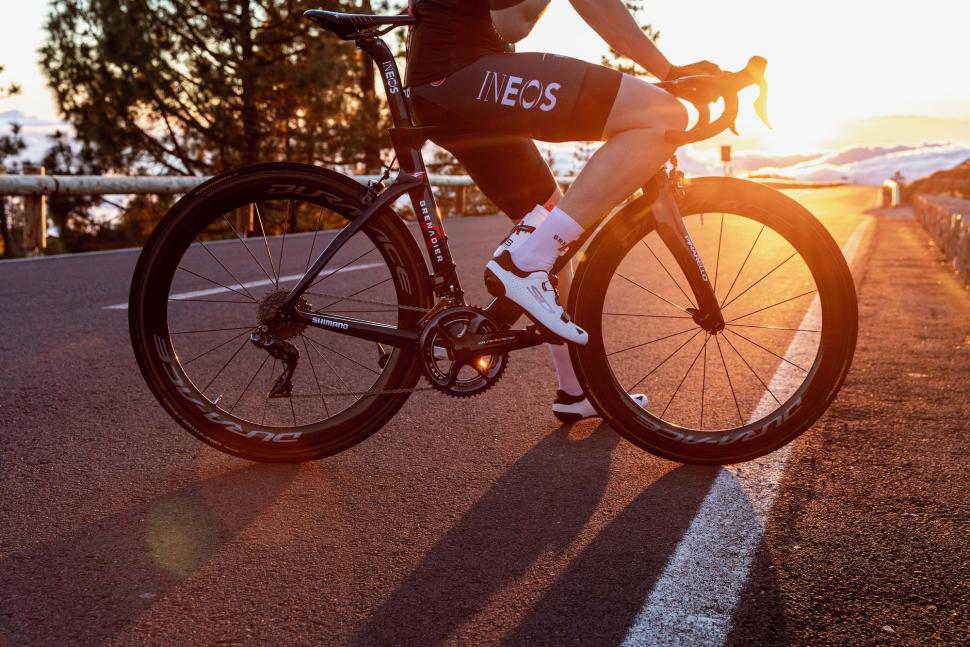 The Dogma F will be raced by Team Ineos in the Tour de France. They’ll almost certainly use the rim brake version; Geraint Thomas and Tao Geoghegan Hart were using rim brakes in the pics supplied by Pinarello. It’ll be interesting to see if any riders opt for discs.