One of the emerging trends of the last few years has been the gravel and adventure bike, and while this year’s Eurobike didn’t serve up as many new bikes as we expected (partly because of the absence of many big brands) there were still some very interesting bikes on display. Here’s a roundup of ones that caught the lens of my camera. 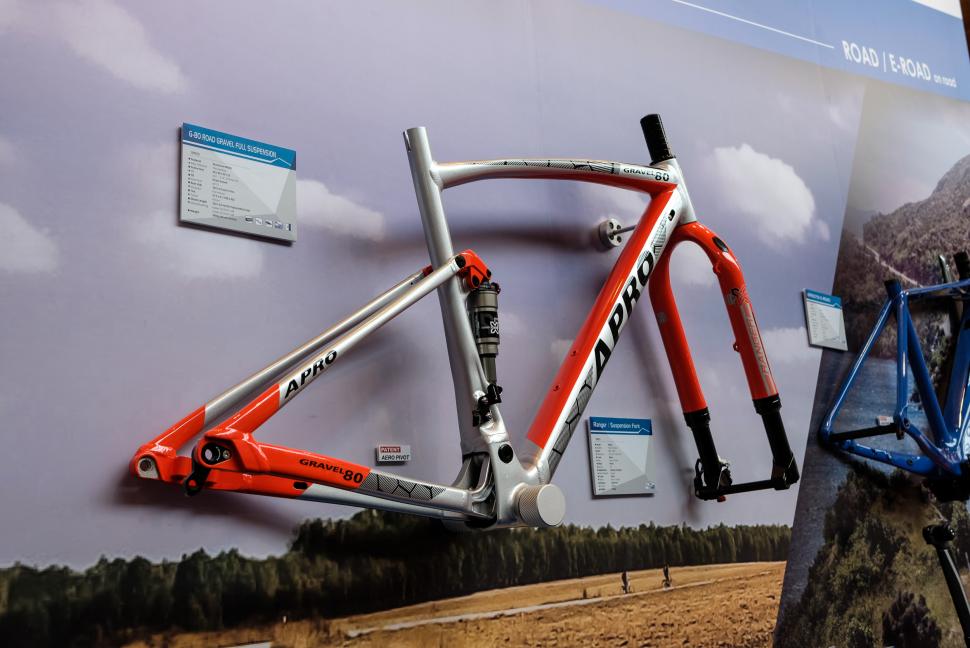 With the Fox AX, Lauf Grit and new MRP fork, suspension is starting to creep into the gravel and adventure bike market. Taking things to another level is the APRO Ranger, a short travel full suspension frame with an upside down X-Fusion fork. We saw it when it debuted in Taiwan earlier this year, but we spotted the frame hanging up on display at Eurobike as well. No word on whether it'll arrive in the UK for you to buy though. Would you buy it? What's the interest level on this one? 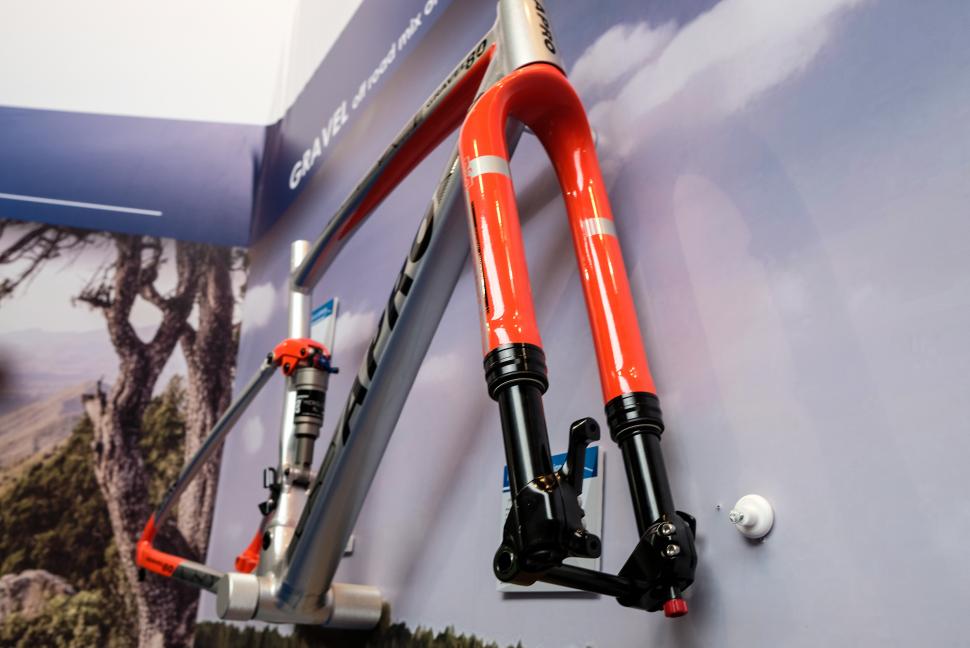 If the frame strikes you as a step too far, we think there might be interest in the fork - short travel, big tyre clearance and tunable suspension. Or is it just overkill and taking away from the simplicity and purity of riding a rigid bike over any terrain. 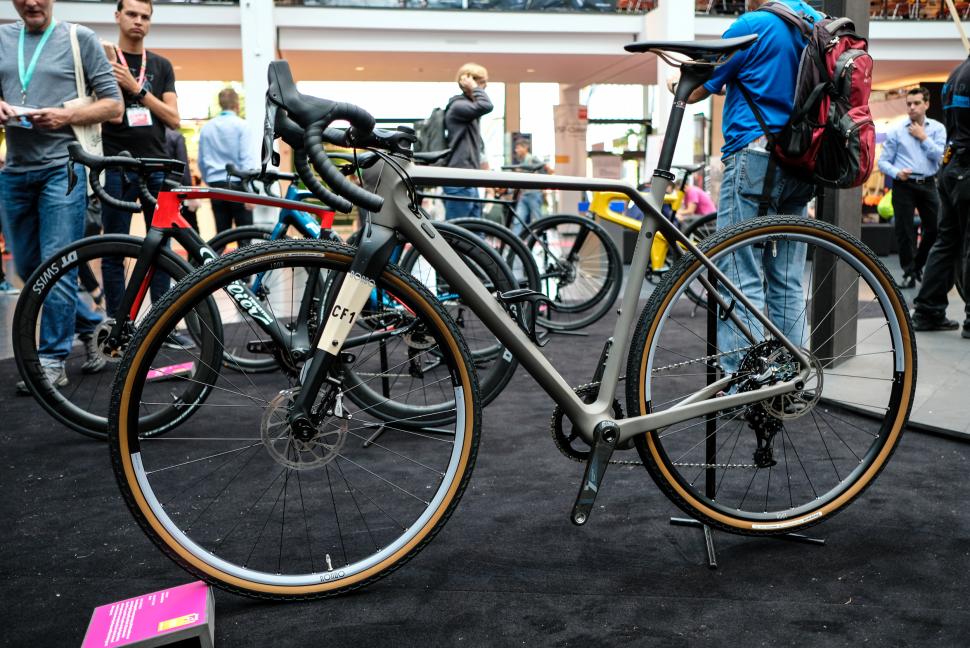 Rondo is a new bicycle brand from Poland that was showing its RUUT gravel and adventure bike at Eurobike recently, and it has some interesting details up its sleeve. Rondo was founded by the same people who created mountain bike brand NS Bikes, so they're bringing some good experience into this sector. Keen to offer something different and unique in a crowded marketplace, the company has developed its own carbon fork with a flip chip in the dropout that allows you to alter the geometry. 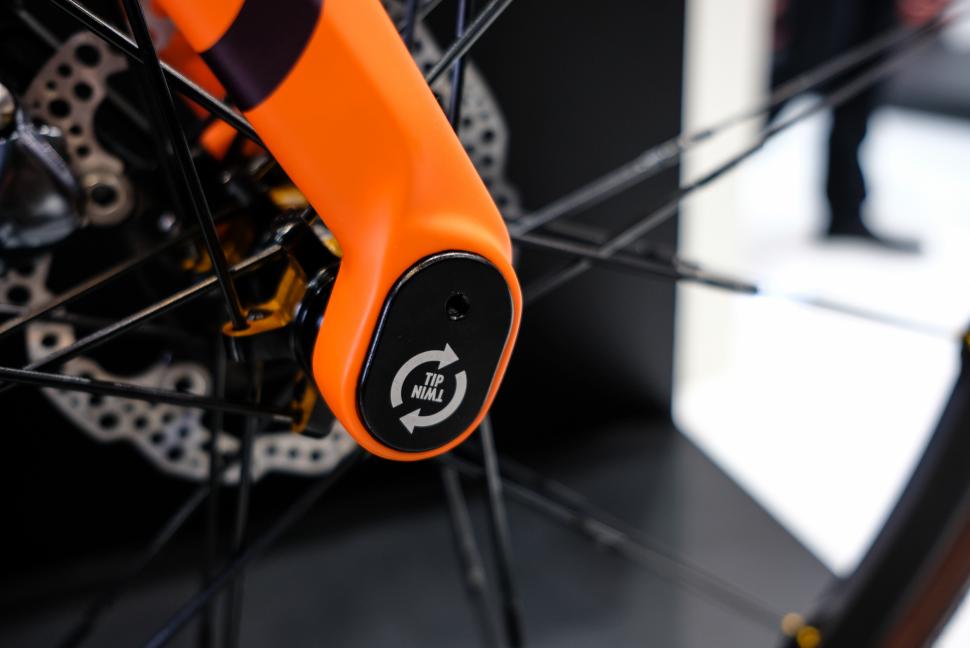 “Thanks to our unique TwinTip fork you can easily switch the geometry between “racing” and “endurance” and tune the position to your riding style. It’s an awesome feature that finally silences the never-ending debate about which bike is better as a gravel grinder and which one is designed with cyclocross racing in mind. The RUUT is both, so time to shut up and ride,” explains the company.

The flip chip moves the front wheel axle vertically by 10mm and what this does, in its highest setting, is slacken the head and seat angles and raise the handlebar height. Like it slack and high at the front or prefer it low and steep? You can choose depending on your riding style and terrain requirements. Adjustable geometry is popular on mountain bikes but we can’t recall seeing many road bikes going down this development path. 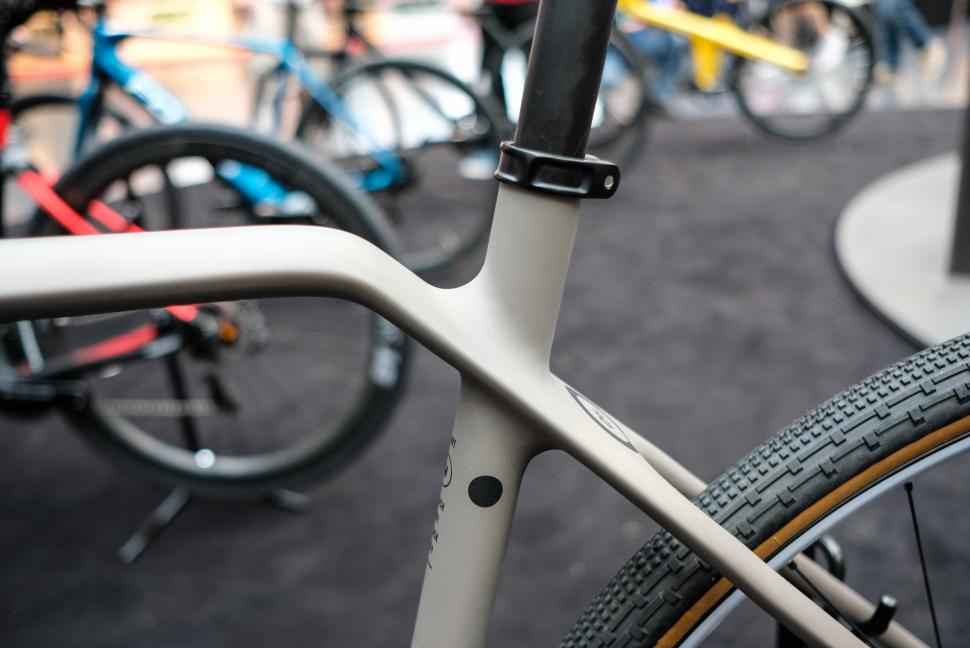 The RUUT is available in carbon, aluminium and steel (yes, there’s really a steel option) versions with a choice of specs and built options - we’ll get a full list of models and prices soon. Like many of the latest adventure bikes, the RUUT takes both 700c and 650b wheels, with space for 40mm and 2.2in tyres depending on the wheel size. Then there’s that distinctive kinked top tube at the seat tube, a design decision based on trying to improve seated comfort by allowing the seatpost to flex more.

Open updates UP and custom UPPER 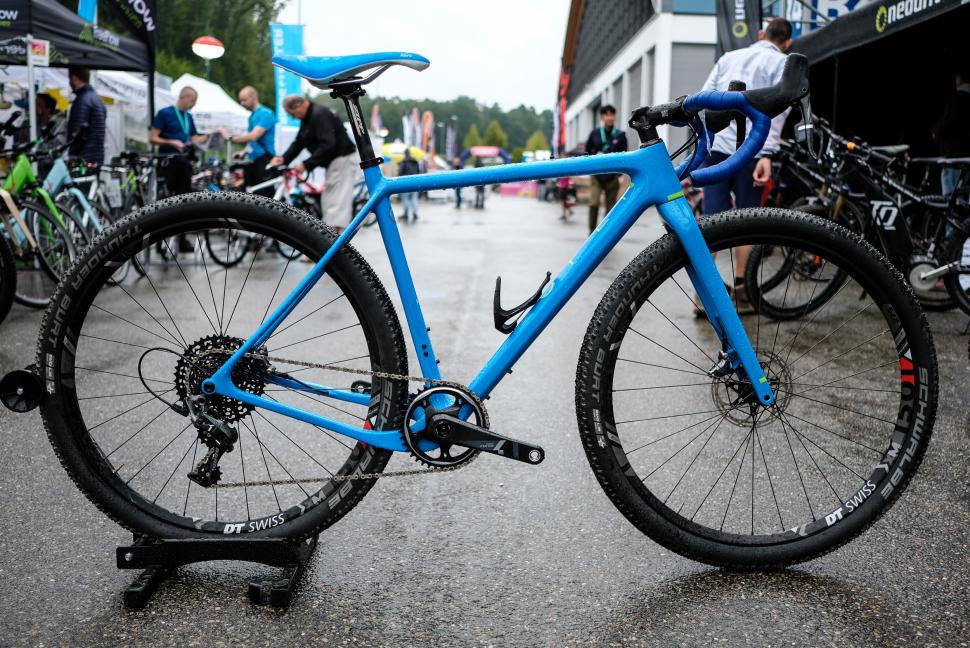 Open really capitalised on the growing appetite for gravel and adventure riding with its UP launched back in 2015, with some innovative design allowing the fitting of a wide range of wheel sizes and tyre widths. The original UP is still available, it’s now called the classic, because there’s a new UP that gets a slightly lighter frame and switches to flat mount disc brakes and takes the lighter fork from the UPPER to shed even more weight, as well as moving to a 12mm thru-axle for easier wheel compatibility. 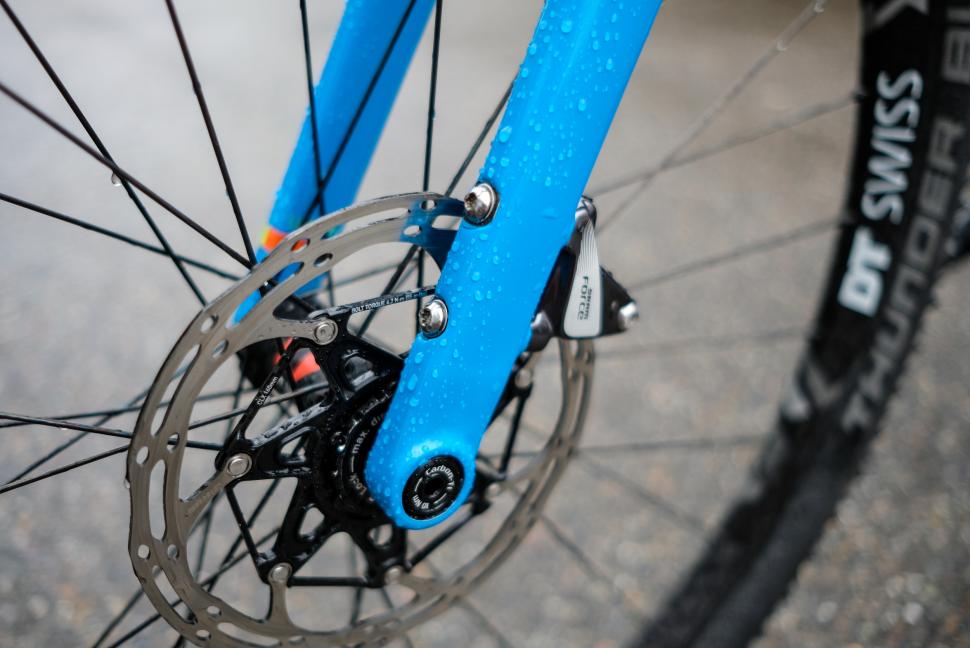 Open made waves with the orange colour of the original and is offering the new UP in a choice of blue or green. The new fork has 12mm thru-axle and flat mount, but rather unually the caliper bolts thread in from the front of the fork. 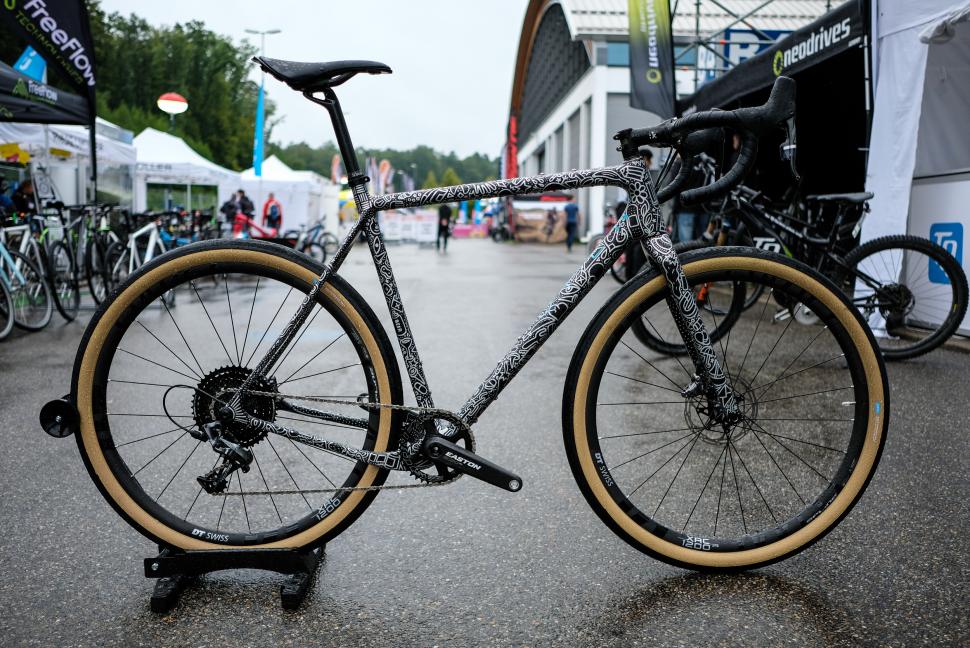 The UPPER is a high-end version of the UP with a more advanced carbon fibre layup reducing the frame weight by some 230g, bringing it down to 870g, impressive for this sort of bike - it’s lighter than some pure race bikes! The frame shares all the key features of the original UP, including the now iconic (and increasingly copied) dropped chainstay to provide big tyre clearance without fouling the chainset. 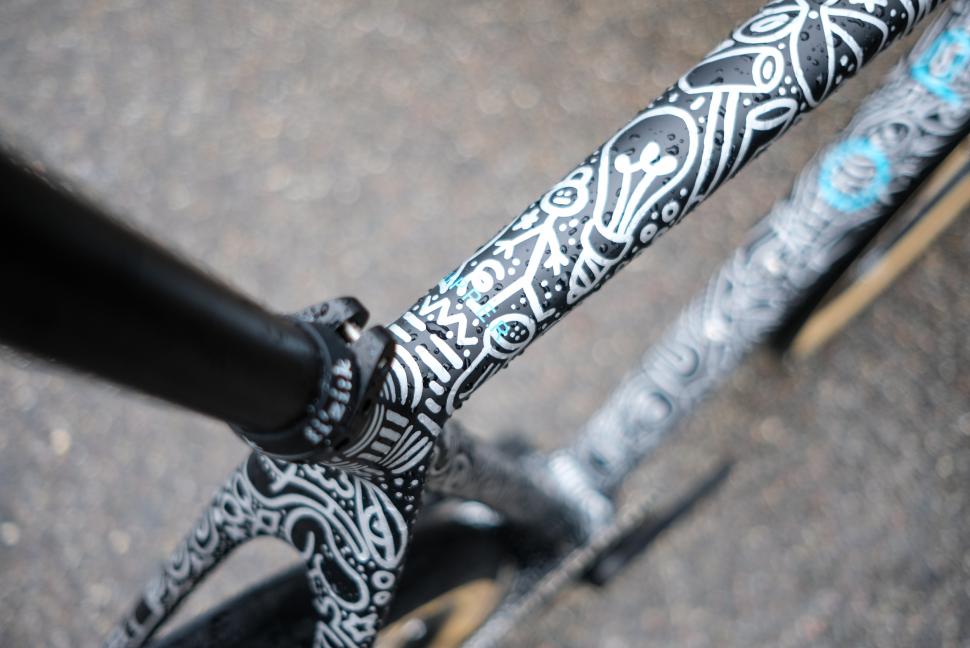 This special paint job is one of 10 limited edition frames available, and with just three still available you’re going to have to be quick if you really want one. The guys at Open handed a bare frame to an Italian artist called Cento Canesio and literally gave him a blank canvas to create whatever he wanted. 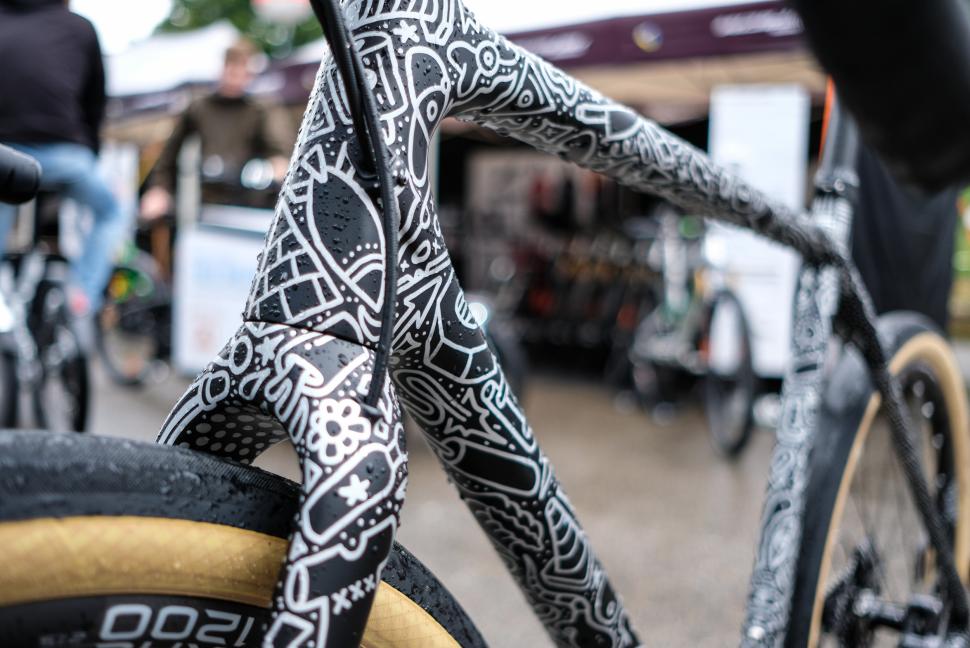 And what he created is a stunning work of art. Each frame is hand-painted to order and covered with a protective lacquer to preserve the art. 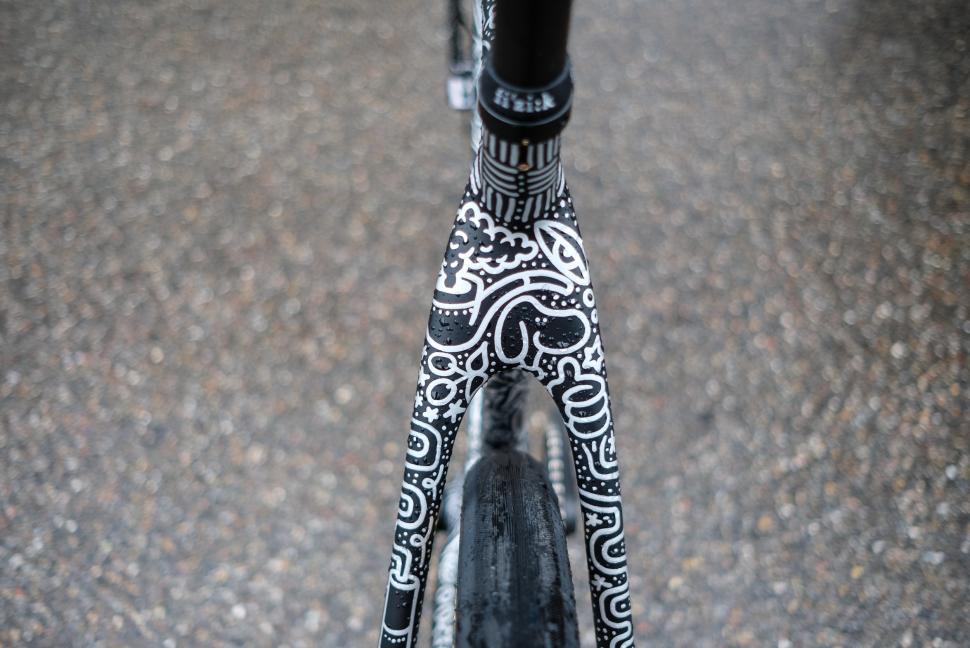 What do you think? Would you? 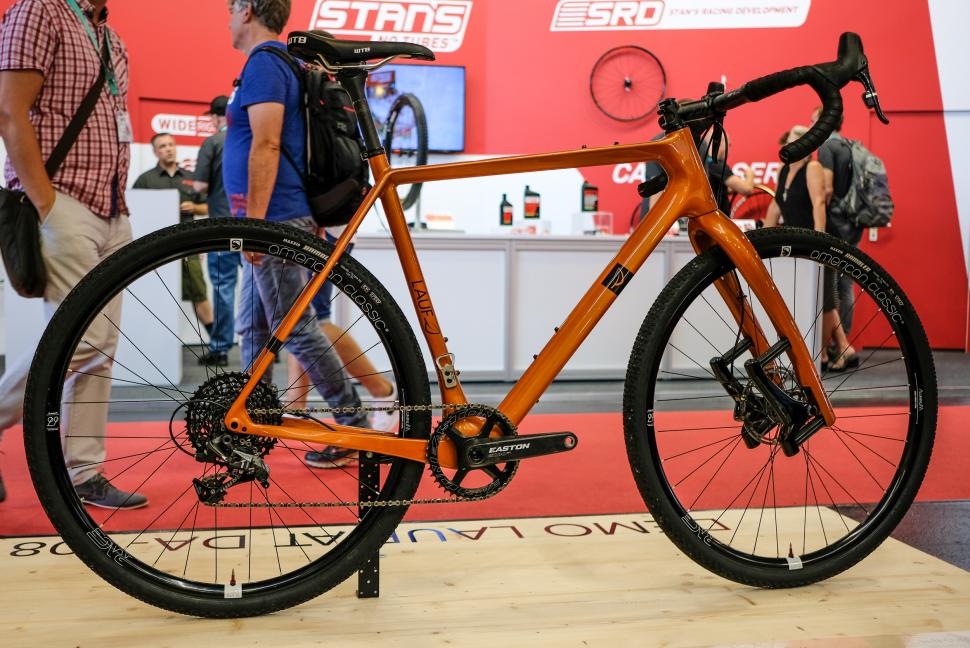 Lauf is famous for the controversial looking suspension fork with no moving parts and made from carbon fibre - I rode one at Dirty Reiver and you can read my review here. The company has now launched its own frame, the True Grit, designed to complement the fork and it’s packed with neat details. It’s made from carbon with big tyre clearance and is designed around 1x and 2x drivetrains. When using the former the front mech mount becomes a handy bottle opener for that essential post-adventure beer. You can read the first ride by the chaps over at off-road.cc here. 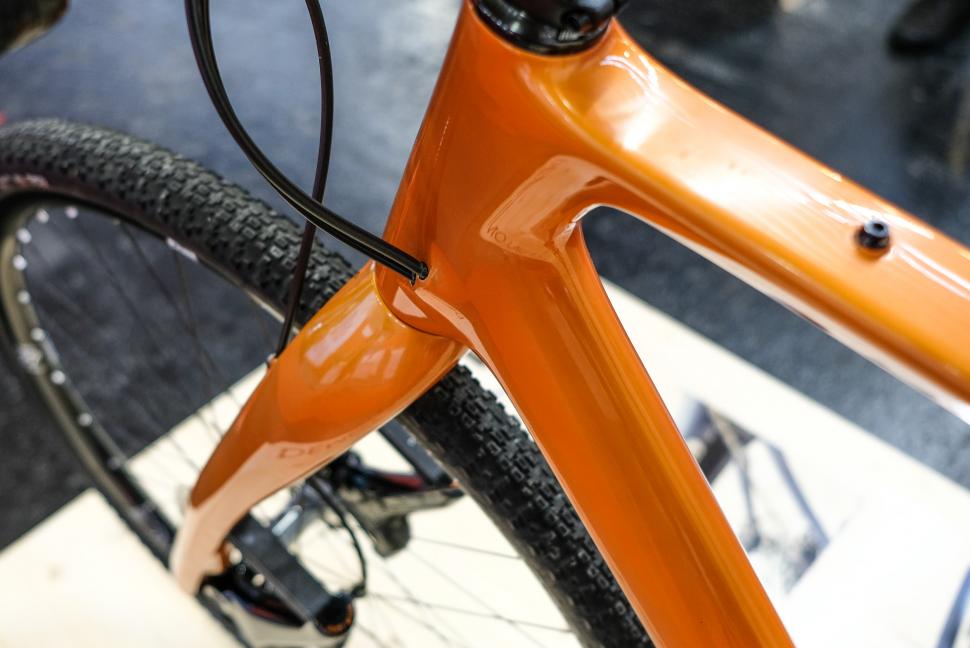 The bike in the photo is also sporting the new Lauf SL fork. It features the same 25m of travel via leaf springs as the regular fork but it’s lighter to the tune of 50g and has a 1.5in bearing race moulded into the crown, so no scrabbling around a tool box or phoning up local bike shops to source a suitable crown race. The shape of the fork is also softer on the eyes, but more important than that is increased stiffness from front to rear. 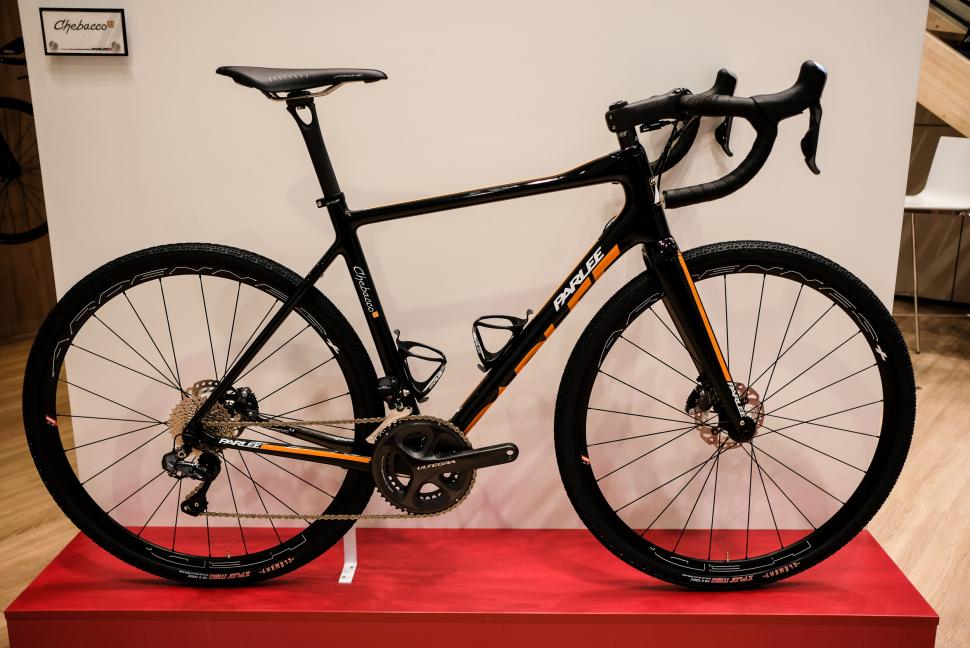 From the US comes this Parlee Chebacco. I tested the frameset last year and raced it in the inaugural Dirty Reiver gravel race, and it’s still one of my all-time favourite bikes in this gravel and adventure category. There’s no change to the bike for 2018 but the US company is now looking to offer full builds where before it was only available as a frameset here in the UK. 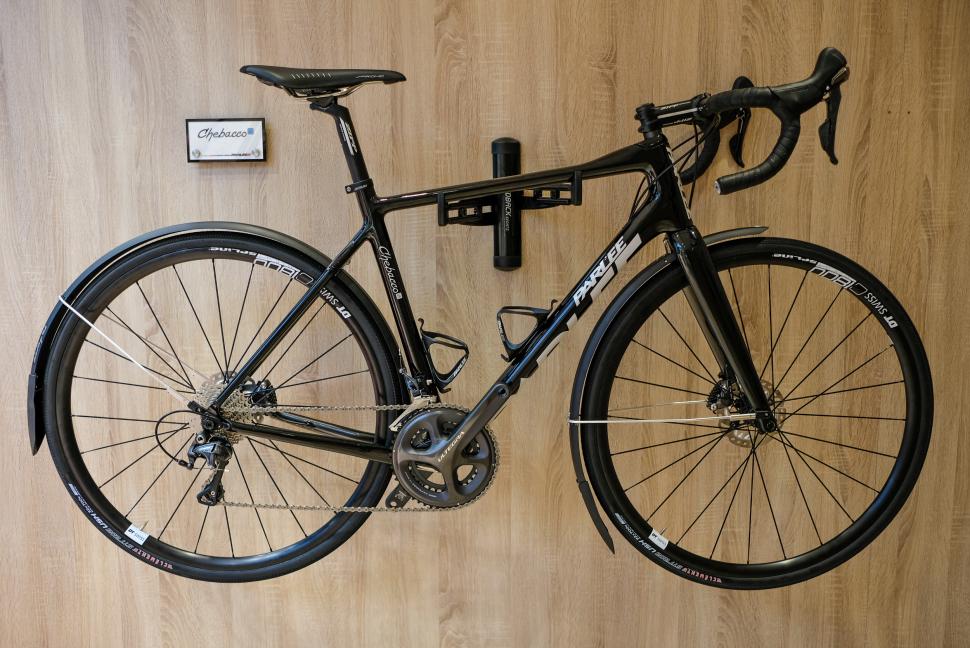 The Chebacco is one of the few carbon adventure bikes with mudguard mounts, and keen to demonstrate the versatility this offers, Parlee has now added the Chebacco 4S (four seasons) build to the range, with faster rolling tyres, mudguards and a Ultegra groupset with a double chainset.

Merida is a big company but has been slow to get into the gravel and adventure market, but that’s all changed now with the launch of the Silex. And when Merida does things, it does them on a big scale, and there’s a huge range of aluminium and carbon models providing a wide range of competitive price points. 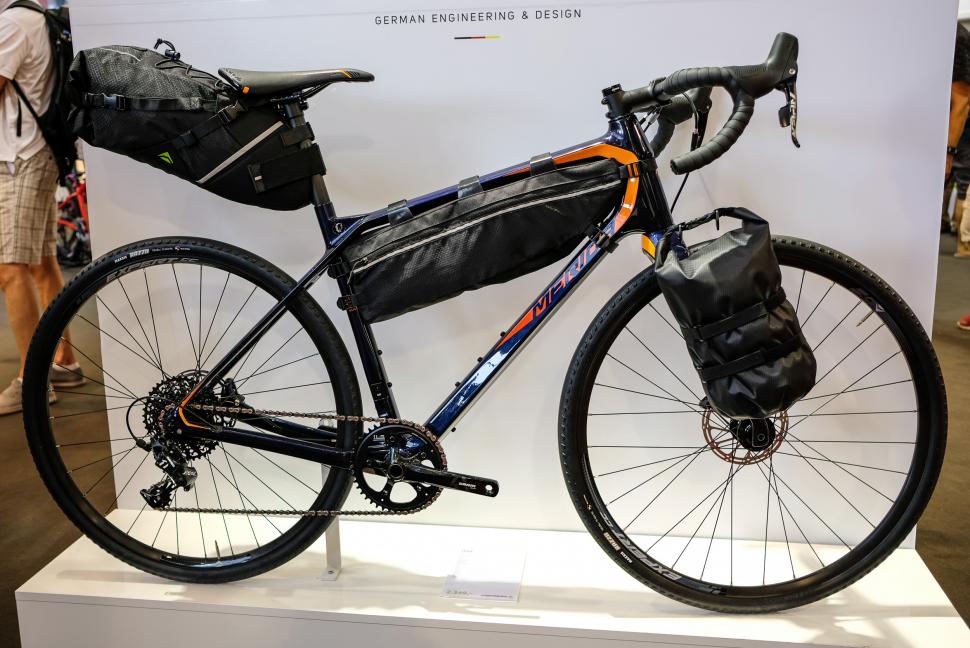 The frame and fork are adorned with rack and mudguard eyelets, and this bike was built to demonstrate its bikepacking capabilities. A distinguishing feature of the new Silex is the fact it’s designed around a mountain bike style geometry with a long front centre and short, just 80 or 90mm, stem. There’s also a very tall head tube that is intended to provide a high stack without resorting to an ugly stack of steerer tube spacers. There’s space in the frame for 700x42mm or 650bx57mm wheels and tyres 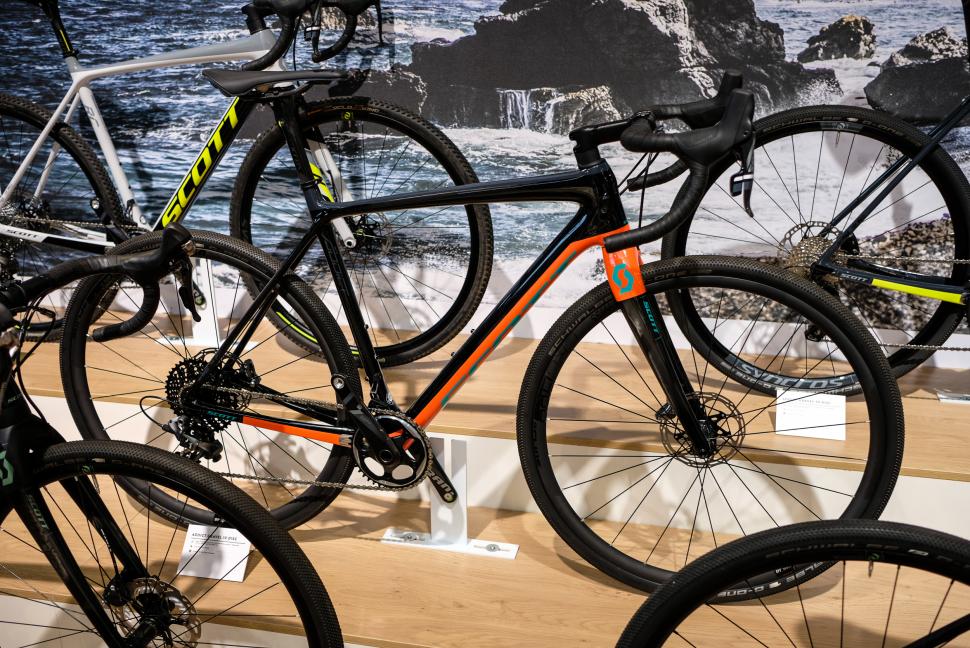 Scott has taken its Addict cyclocross bike and given it a gravel makeover. This the Addict Gravel 10, the most expensive offering in a range of three bikes, and it’s specced with the sort of parts you’d hope to find on a gravel and adventure bike. 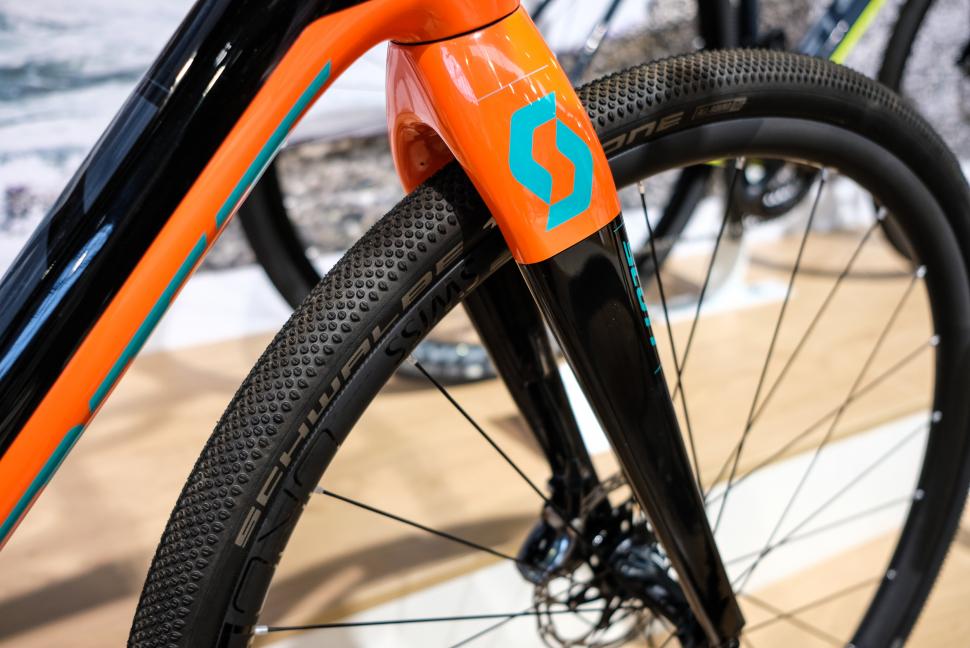 So there’s a SRAM Force 1x11 groupset with a single ring, wide range cassette and hydraulic disc brakes, and wide Schwalbe G-One Allround 35mm tyres for grip on a multitude of surfaces. 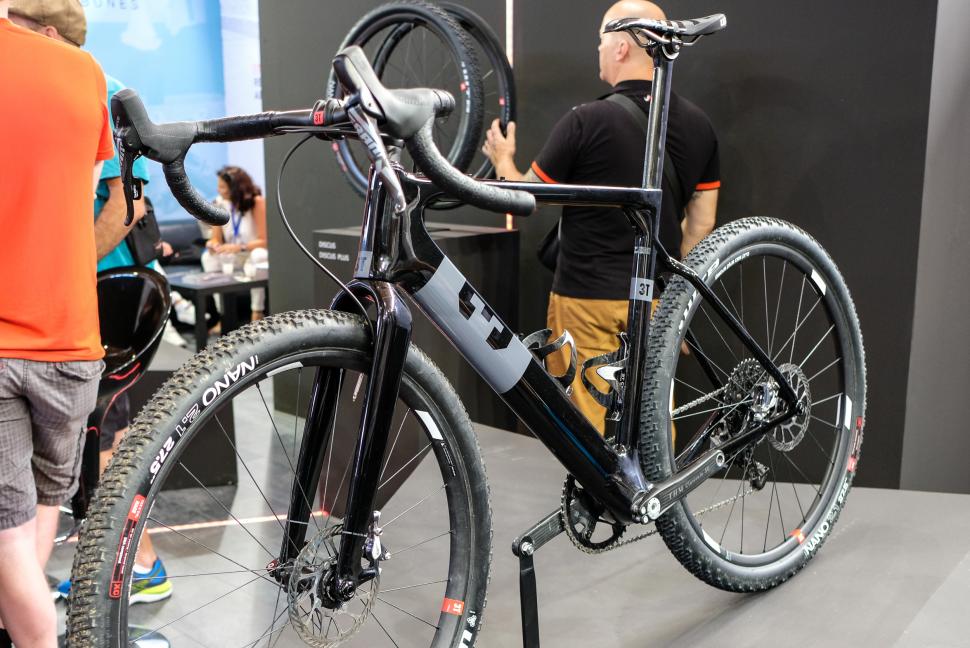 Okay so it’s not a new bike, but the 3T Exploro was still turning heads at the Eurobike show where it was on display alongside the new Strada. It’s a bike, with its fat tyre clearance and aerodynamic frame, that has got a lot of people talking and taking note.