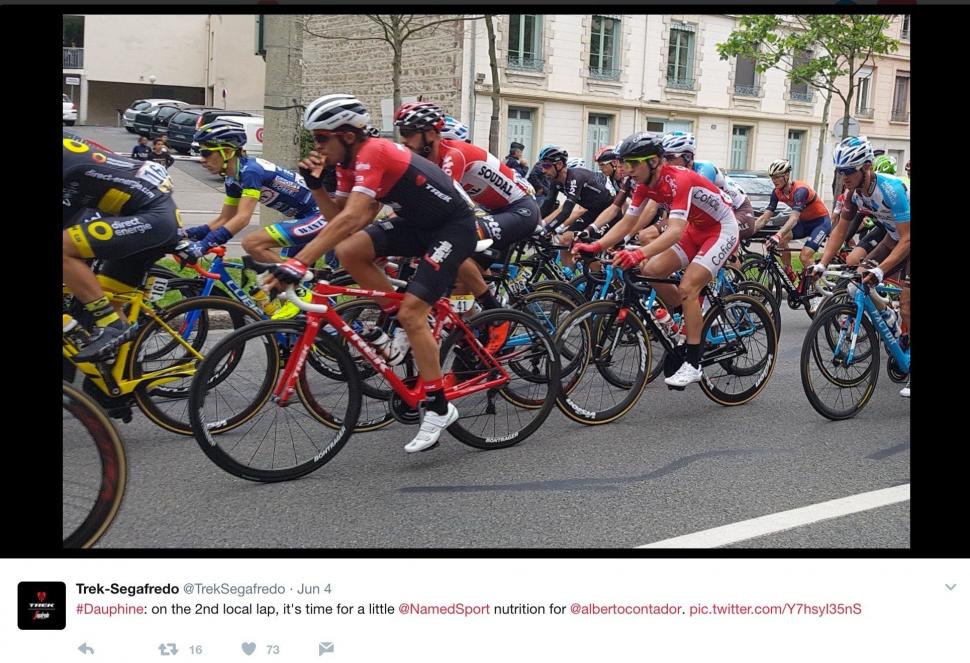 Trek Emonda gets update for 2018, including disc version

Trek is set to reveal new versions of its Emonda lightweight race bike, including disc brake models, for 2018.

Trek-Segafredo’s Alberto Contador is currently racing the Critérium du Dauphiné on the rim brake version of the new Emonda.

What do we know about the bike? Applications for UCI approval of both the Emonda SLR Caliper and Emonda SLR Disc were made on 15 December last year, and they’ve both been added to the list of approved models of frames. Each of them comes with a carbon fork, although you could have guessed that. The UCI approval covers sizes from 47cm to 62cm. Trek-Segafredo Tweeted this pic of Contador on the new Emonda and… it looks a lot like the existing model! The down tube could be a little more squashed than previously, although that might be down to the angle of the photograph.

We reviewed the Trek Emonda SLR 8 here on road.cc back in 2014 (wow, 2014!) and were mightily impressed by just how lively it felt. With the launch of that incarnation, Trek was proud to boast about “The lightest production road line ever”. Trek likes to keep its range well stratified and easily navigable. Want aerodynamics? Go for the Madone. Want comfort? Go for the Domane. Want light weight? Go for the Emonda.

We can guess, then, that Trek will have shaved off a little weight with the new model, even if it’s just a few grams. That’s how these things usually work. Either that or (and this is less likely) it will have kept the weight the same and increased the stiffness so it can talk about a higher stiffness to weight ratio.

Trek had three versions of the Emonda last time around, the lightest of which was the SLR with a claimed frame weight of just 690g (size 56cm). Any lighter than that without sacrificing stiffness would be seriously impressive.

Trek also had cheaper SL and S Emonda models approved by the UCI last time but there’s no mention of anything similar here. They could be going through the approval process, but not necessarily – the Madone is now available in only the high-end 9 Series and the Race Shop Limited versions. Even the least expensive complete bike is £4,800.

There is no disc brake version of the Madone although Trek offers many disc brake Domane models.

We’ll give you more details on the new Emonda – rim brake and disc brake versions – as we get them.