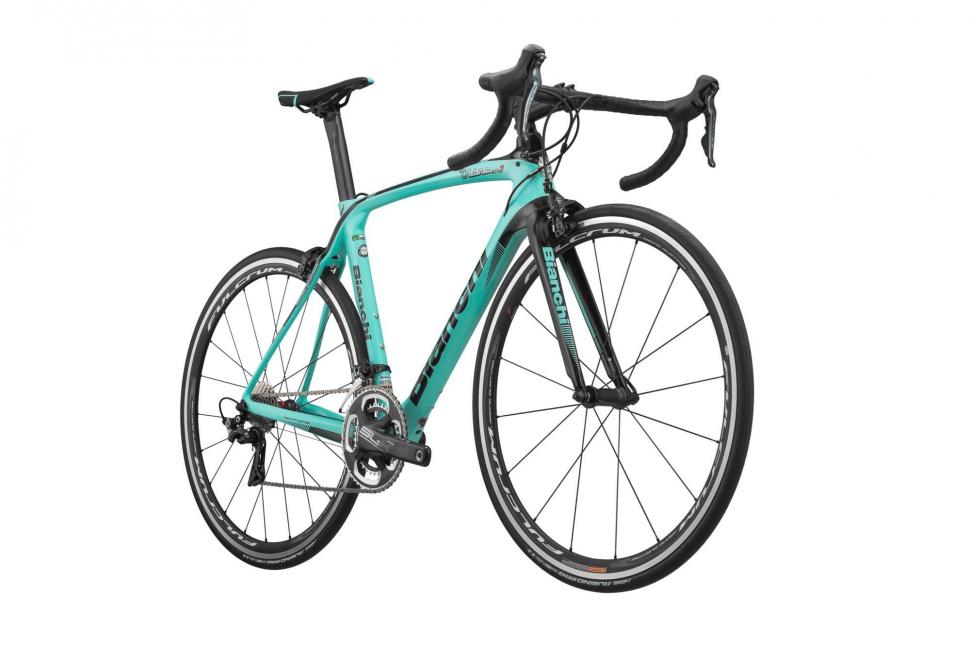 Bianchi has announced the launch of the Oltre XR3 aero race bike featuring Countervail technology that, it’s claimed, cancels 80% of vibrations while increasing frame and fork stiffness and strength.

Check out our review of the existing Bianchi Oltre XR4 here.

The XR3 is said to be “inspired by and derived from” the XR4 which was developed with UCI WorldTour Team LottoNL–Jumbo.

“The proven benefits of the Countervail technology and the aerodynamic advantages of the Oltre XR4 are now shared with the XR3 model,” says Bianchi. 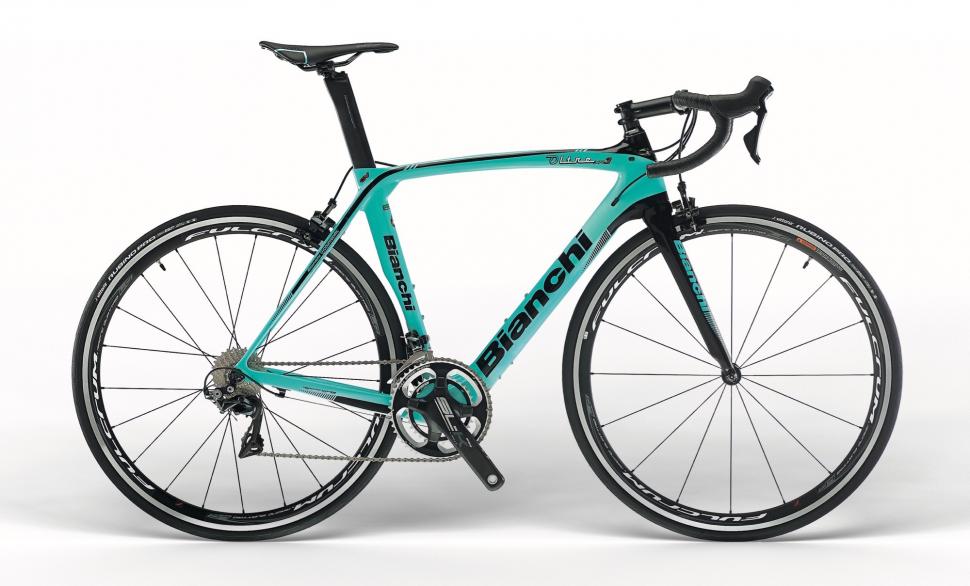 The Oltre XR3 uses the same Countervail technology as several other models in Bianchi’s range including the high level Bianchi XR4, the Iightweight Specialissima, the Infinito CV (including the Infinito CV Disc) endurance road bike and the Aquila CV time trial/triathlon bike. 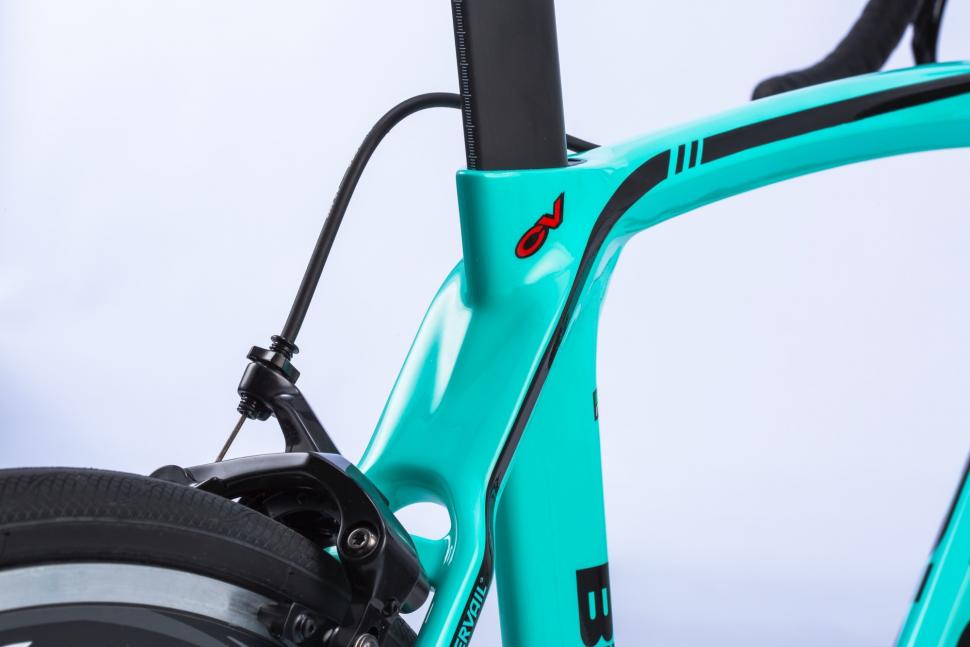 Bianchi argues that because your body accounts for about 80% of the aerodynamic drag that works against you as you cycle, it’s vital that you’re able to stay in your most efficient riding position for as long as possible. The Countervail technology is designed to help you do this by cancelling vibration and thereby increasing your control and reducing muscle fatigue. 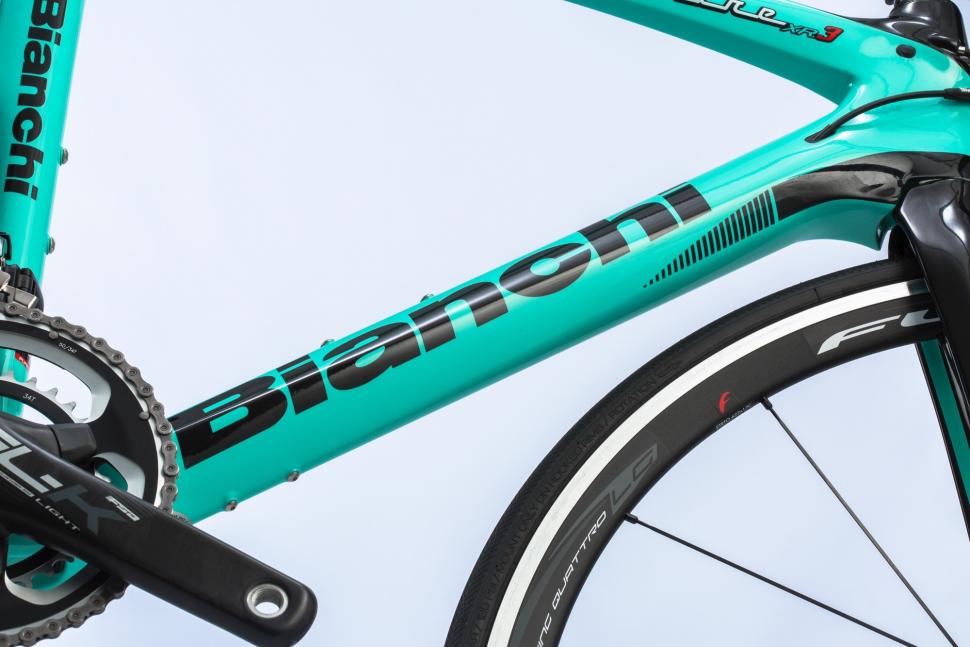 Countervail “is a carbon composite-material system that, with its special fibre architecture, combines patented structural carbon with viscoelastic resin,” according to Bianchi. It comes from Materials Sciences Corporation and is exclusive to Bianchi in the cycling world.

“The result with the Oltre XR3 is a smooth ride and a racer who can stay focused on their fastest, most efficient aerodynamic position for longer,” says Bianchi. “Oltre XR3 riders retain the best possible control, a significant advantage wherever and however you ride and race, with no compromise in power transfer from pedal-stroke to pedal-stroke.” 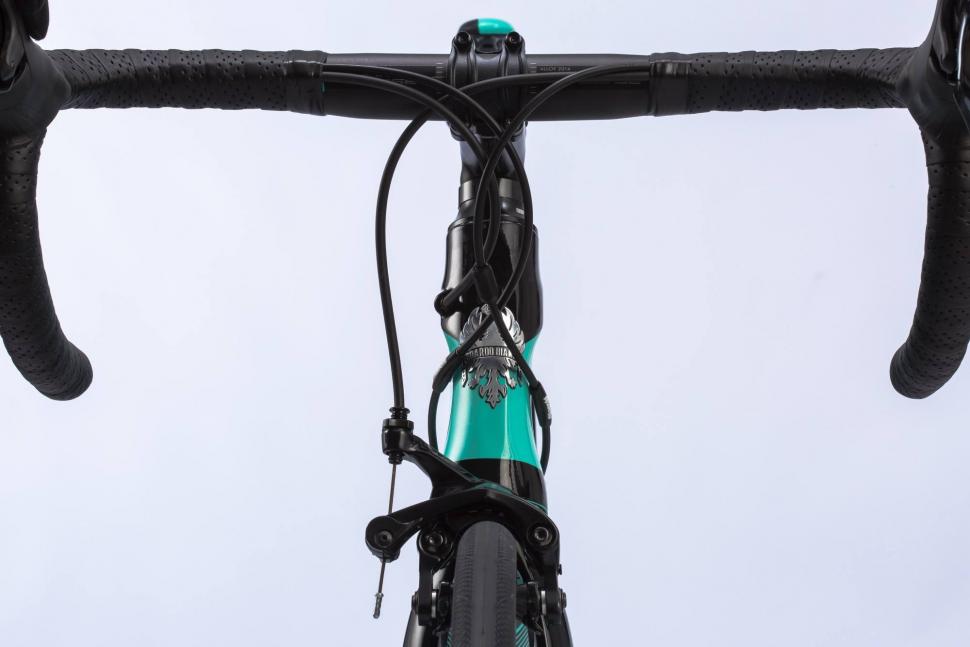 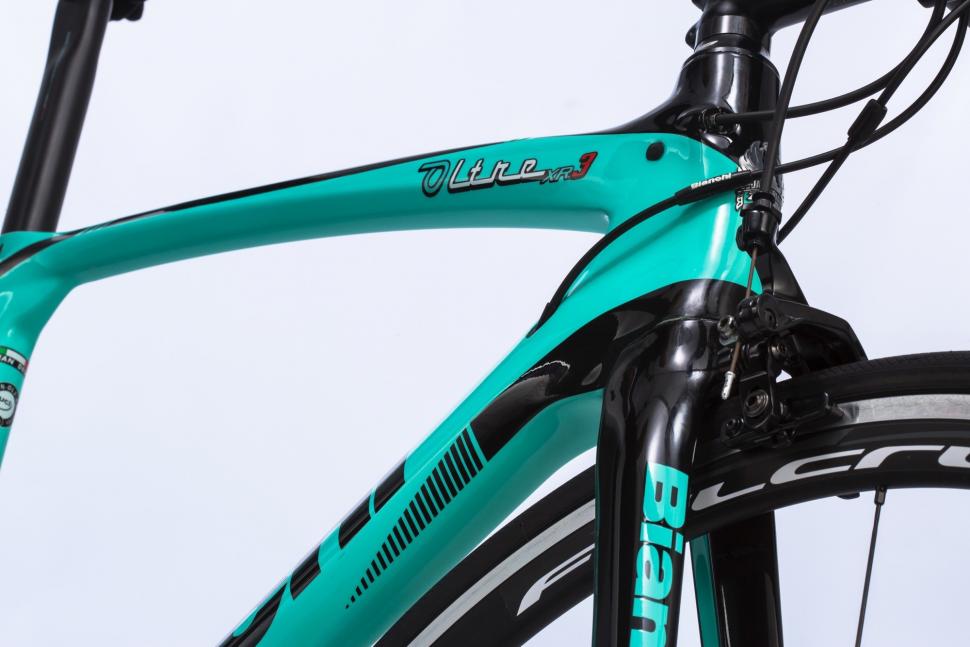 The seatpost is aero profiled too, with a clamp that’s hidden within the top tube. It has an adjustable head clamp offset (the amount the head clamp it is set back from the centre of the post) of 25mm or 10mm.

Many recognisable features of the existing Oltre models have been carried over, including the seat tube that's cutaway around the leading edge of the rear wheel and the wishbone seatstay design.

The full-carbon fork has deep legs while the crown is integrated into the head tube and down tube.

The Bianchi Oltre XR3 will be available in seven sizes from 47cm to 61cm. 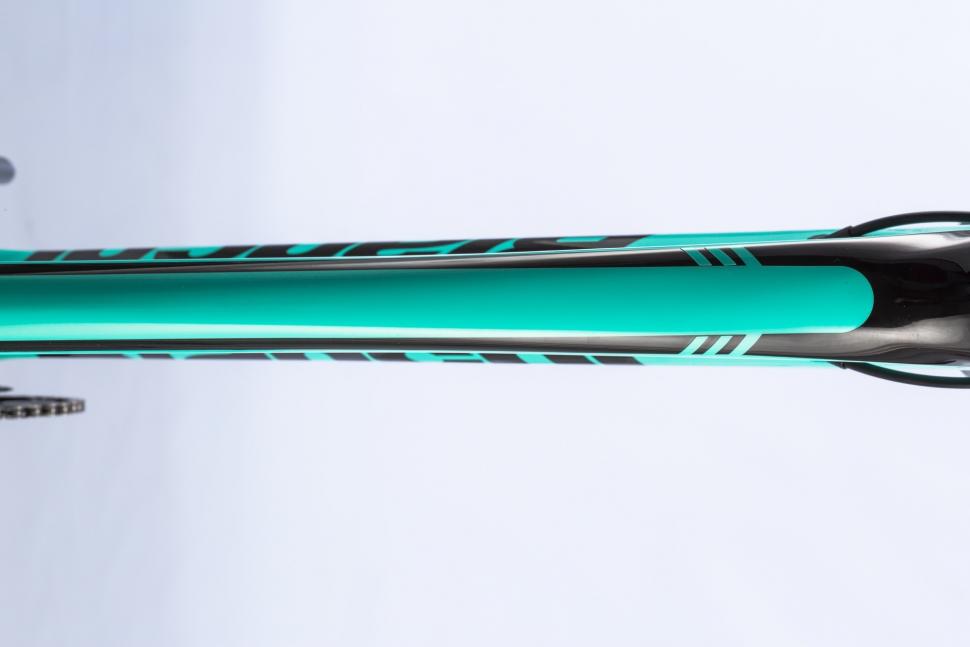 The geometry is exactly the same as the existing Bianchi Oltre XR1, a bike that doesn't feature Countervail technology.

The top tubes of the various sizes are exactly the same lengths as those of the XR4 models while the head tubes are 5mm longer across the board. 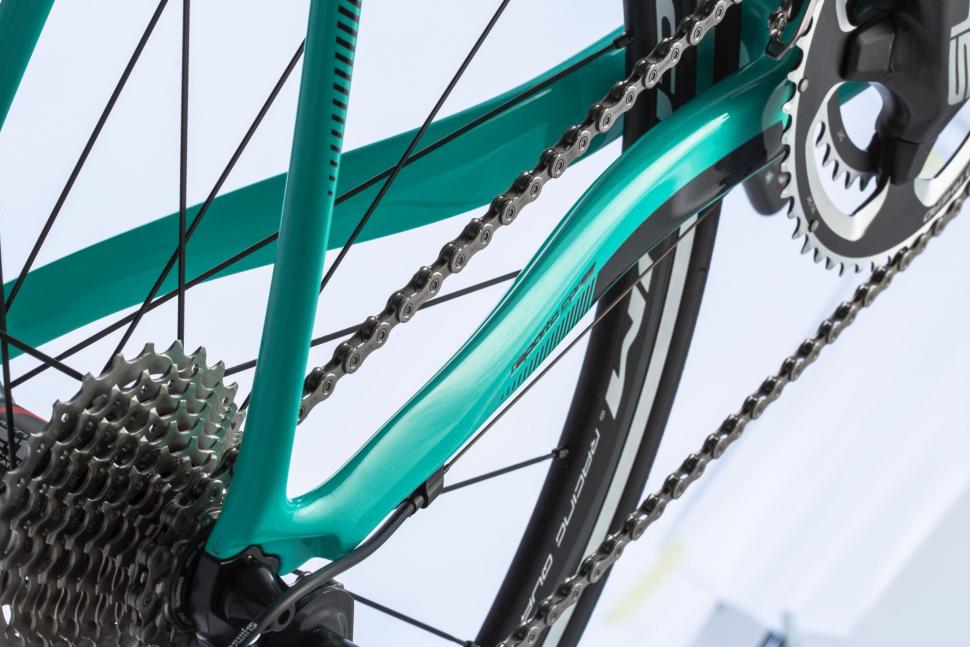 The corresponding figures for the Oltre XR4 are 541mm and 390mm respectively, so the Oltre XR3 is a touch more relaxed but the difference is minor.

The Bianchi Oltre XR3 will be available in six different builds. These are they:

You’re going to want to know prices, aren’t you? Unfortunately, we don’t have them yet because they’ve not been finalised. We’ll pass them on as soon as they're available. 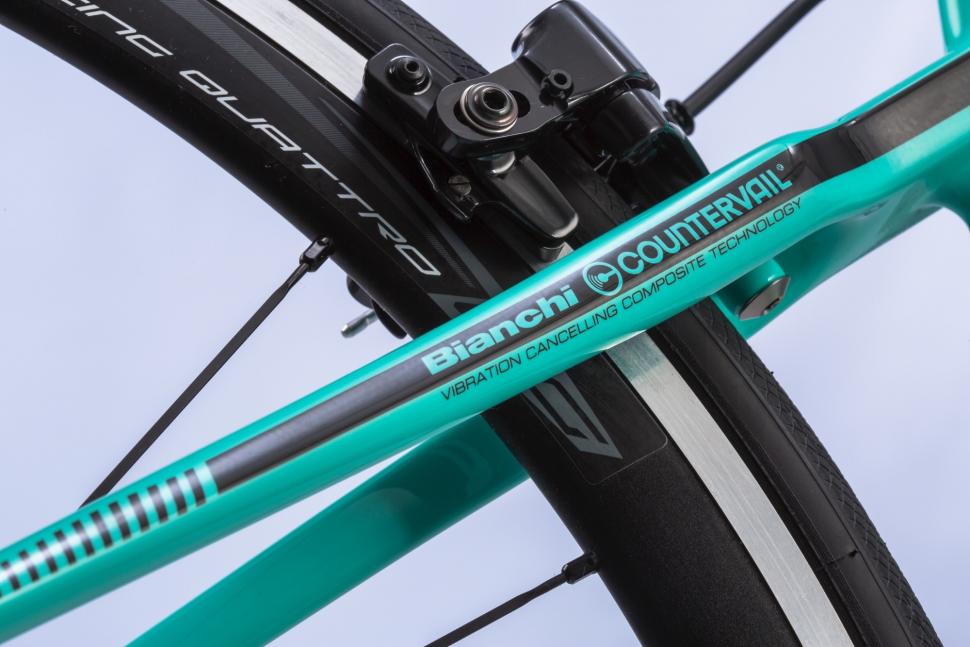 We will be riding the new Bianchi Oltre XR3 next week, though, so we’ll have a First Ride report following that.

For more information go to www.bianchi.com/global/focuson/oltre-xr3-365126