16 stunning handbuilt bicycles to see at Bespoked show this weekend

If beautifully handbuilt bicycles interest are your cup of tea, you'll want to visit the Bespoked show
by David Arthur @davearthur

What are you doing this weekend? If you have a penchant for beautiful handmade bicycles, then you'll definitely want to get yourself to Bristol for Bespoked, the UK's only celebration of handbuilt bicycles.

- Condor Bivio Gravel bike to be unveiled at Bespoked

Ironbridge Bicycles launches at the show 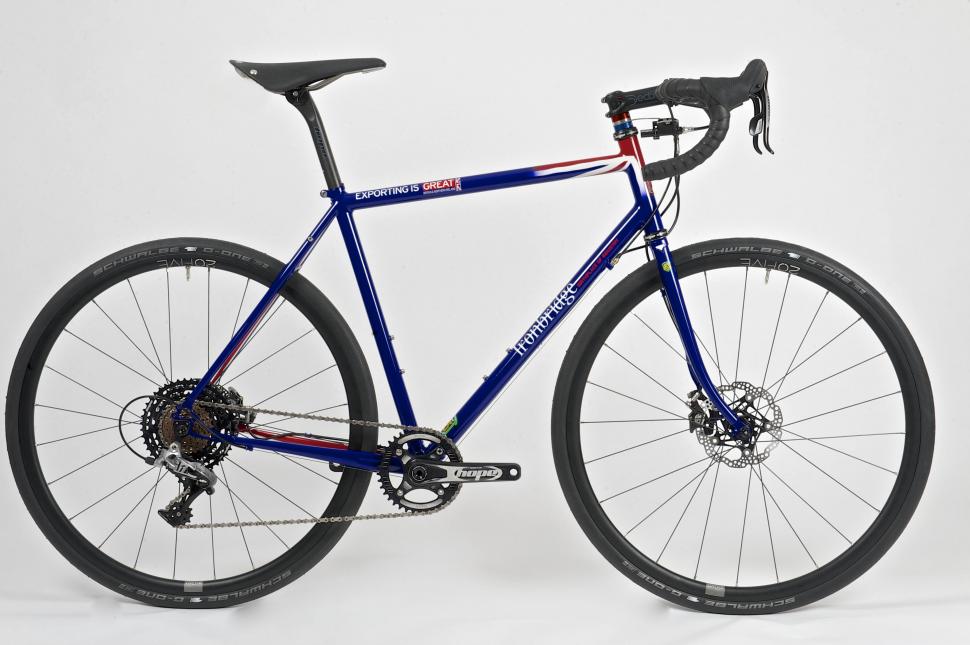 Ironbridge Bicycles from Shropshire-based frame building company Bicycles by Design will be using the Bespoked show to unveil three bikes catering for a range of riding styles. 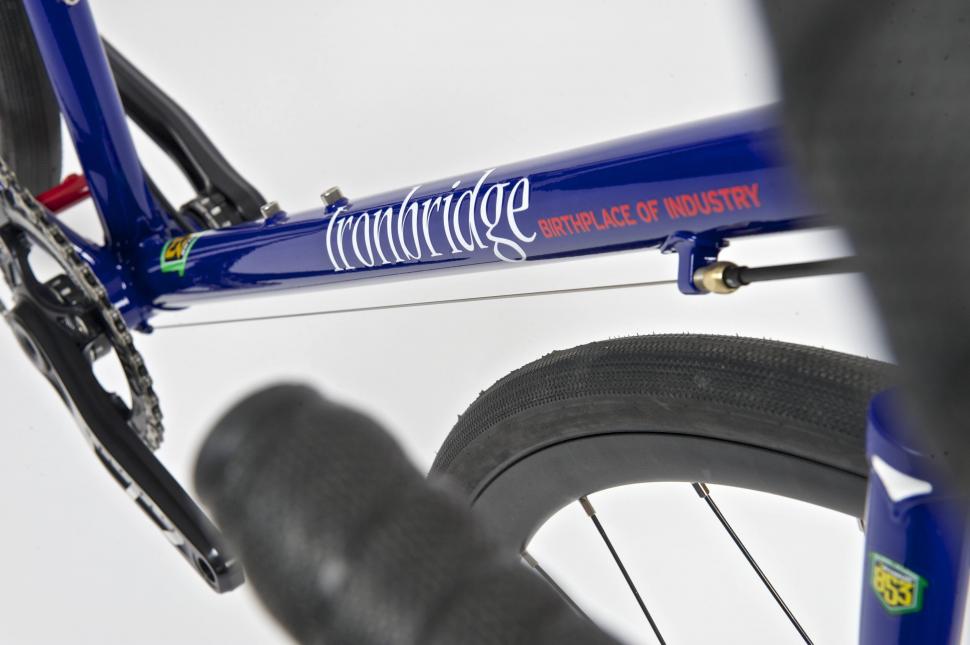 The 1779 is a gravel, touring and bikepacking fillet brazed frame, the 1851 is a cyclocross, gravel and road frameset and the 1952 is a classic lugged road frame available with rim or disc brakes. The frames will cost from £1,690 and complete bikes from £2,500, with a choice of 15 sizes and colours, and an order time of 12-14 weeks.

Duratec Phantom 760g carbon frame to be unveiled at Bespoked 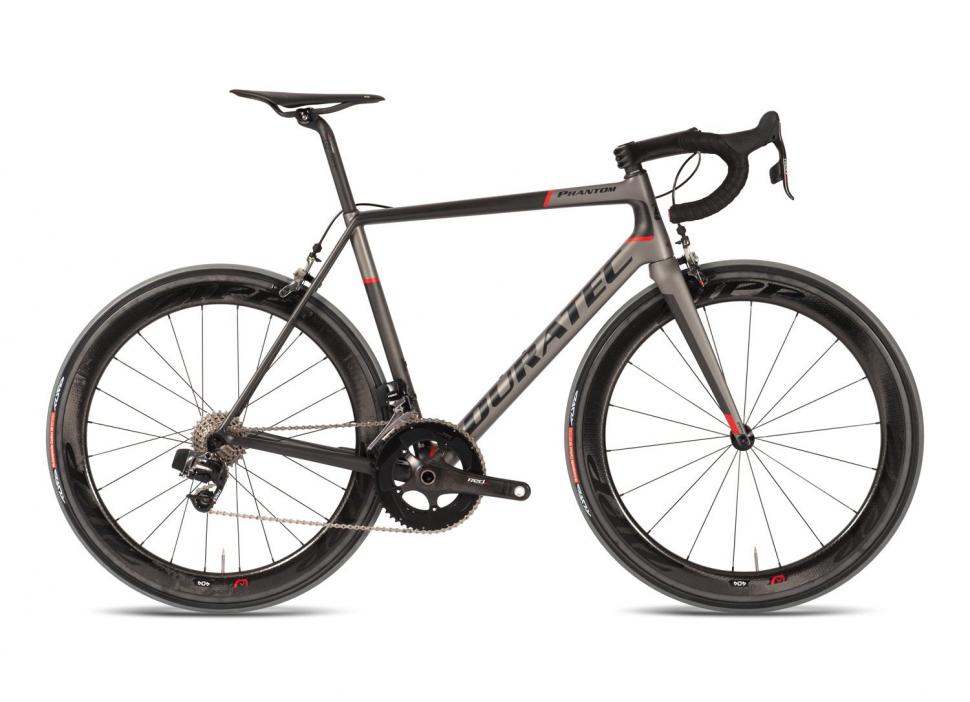 In a collaboration with British firm Bicycles by Design and Czech-based Duratec, the new Phantom, a full carbon frame weighing 760g, will be officially launched at the show this weekend. Duratec proudly claims the carbon frame is manufactured as one-piece using a process that took several years to develop. 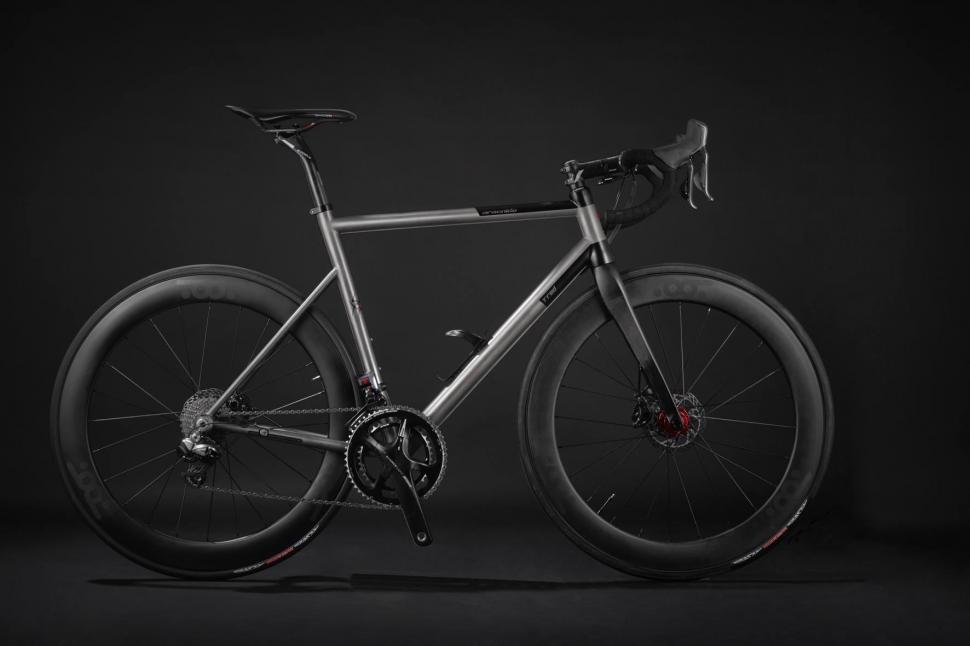 We first stumbled (literally, we bumped into them in a corridor) Italian brand T°RED at Eurobike last year, and they’ll be coming to the UK for the first time with their range of titanium and carbon road bikes. The range covers the complete spectrum of riding disciplines including road, racing, cyclocross, gravel and track bikes.

Rob English to visit Bespoked for the first time 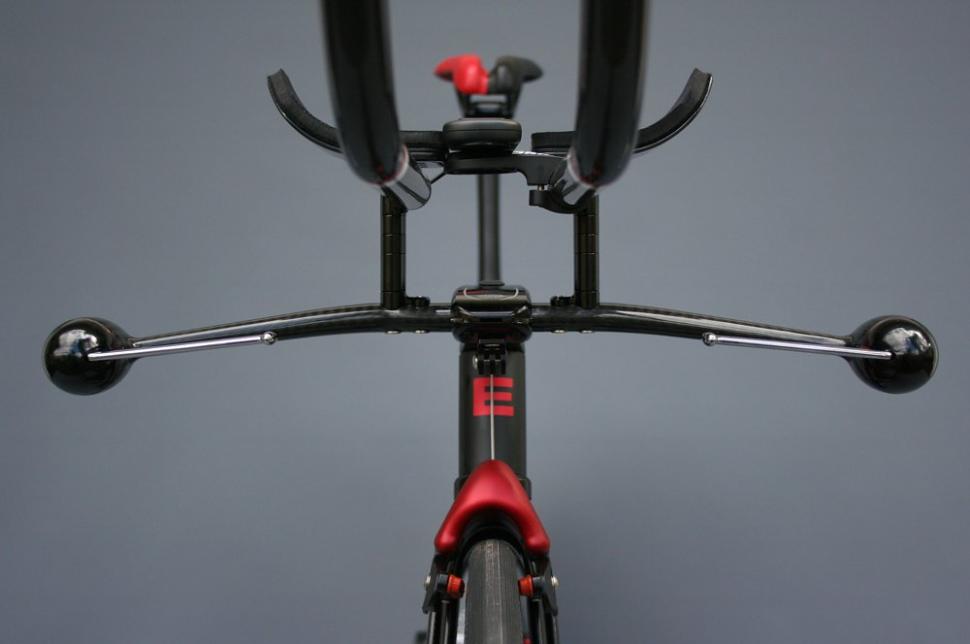 British-born framebuilder, now based in Oregon, Rob English will be bringing some of his fine creations to the Bristol show for the first time. He’s teasingly not revealing full details of the three bikes he’ll be bringing, with one of them yet to be completed, but these photos give an indication of the diversity and craftsmanship. 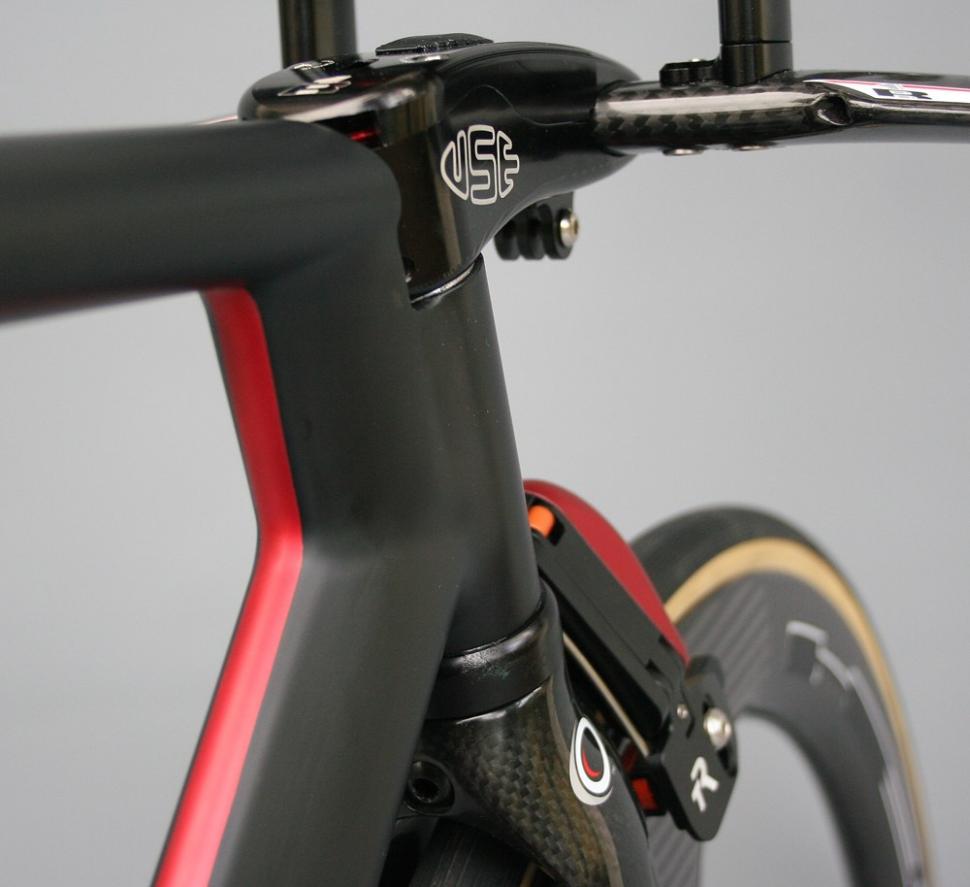 If these teaser photos are anything to go by, we're in for a tread. Definitely reason to go to the show for the full reveal. 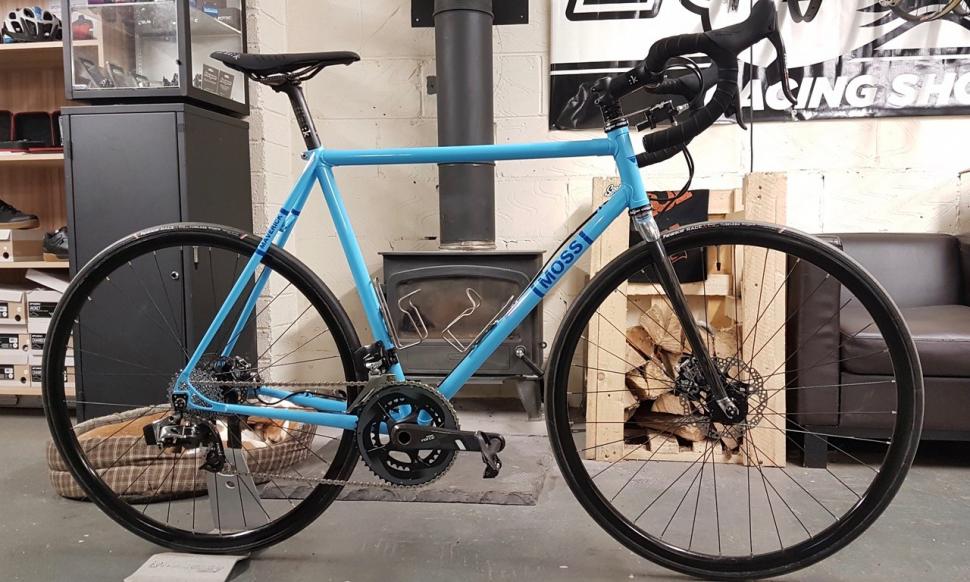 Cheshire-based frame builder Andrew Jones, a previous award winner at Bespoked, will be showcasing his project to developed a GCSE frame building course to teach 16-year-old students to build custom bikes, entitled L!FE Bikes, which will be promoted by the company’s Red Hook Crit race team this year and encourage more young people to get into frame building. 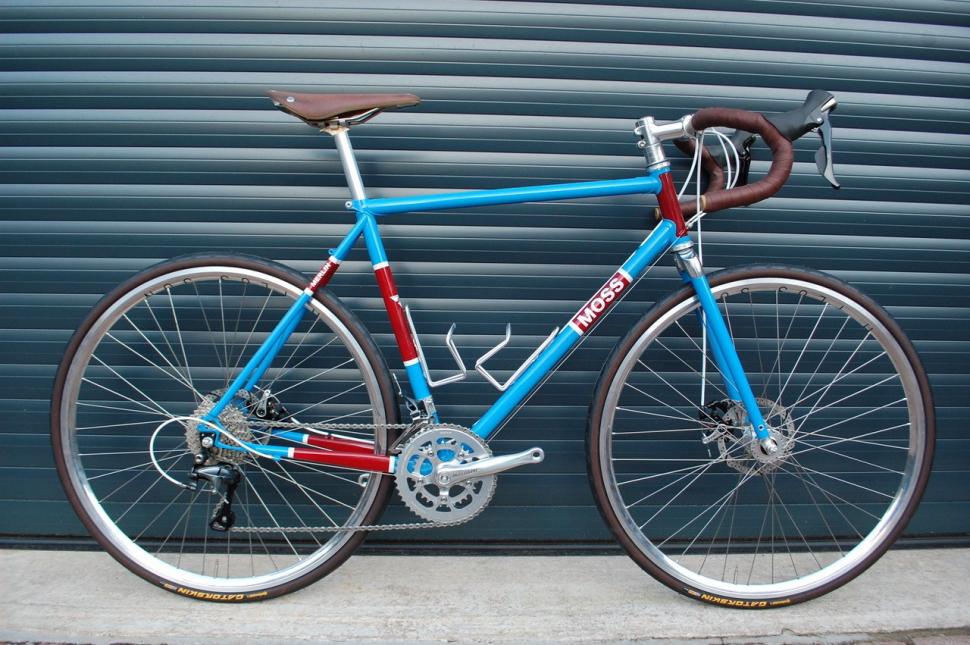 At the show will be two customer bikes, the Merlin built for touring and adventure cycling from Reynolds tubing, and the Maverick steel road bike with disc brakes and built with SRAM eTAP. 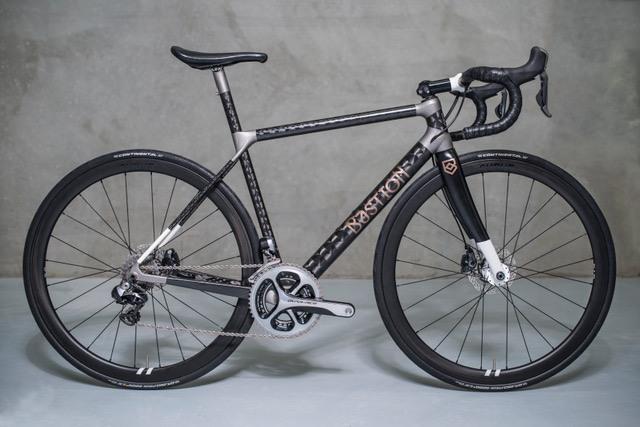 Bastion is an Australian company and last year it launched a frame made using 3D printed titanium lugs with carbon fibre tubes. You’ll be able to see this unique bike in the flesh at the show this weekend. We’re seeing more 3D printed products being used in the cycling industry all the time and this frame is a fine expression of the potential of the process. IT’s not cheap, though, a frame and fork costs £5,800, but you are paying for cutting-edge technology. 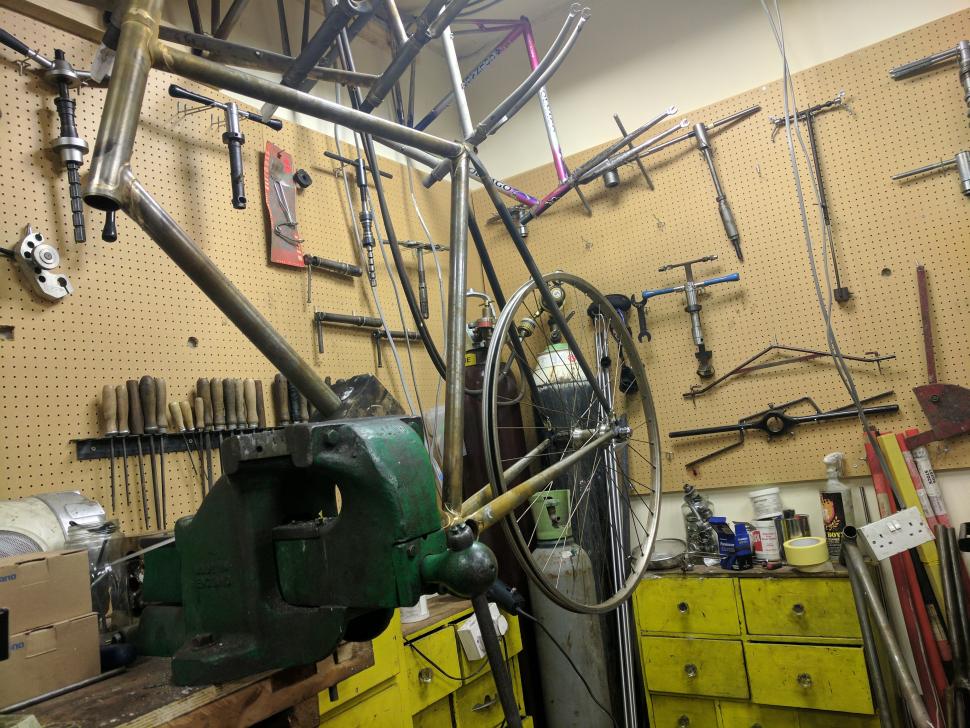 The new Randonneur Special from West Yorkshire-based Ellis Briggs was built to meet the brief from a cyclist wanting a bike for everyday riding with space for wider tyres without resorting to disc brakes, which the company say “spoil the look of a traditional frame, not to mention adding unnecessary heft to the bike and the frame.” After the unveiling at Bespoked, the Randonneur Special will be available as the basis for any custom build. 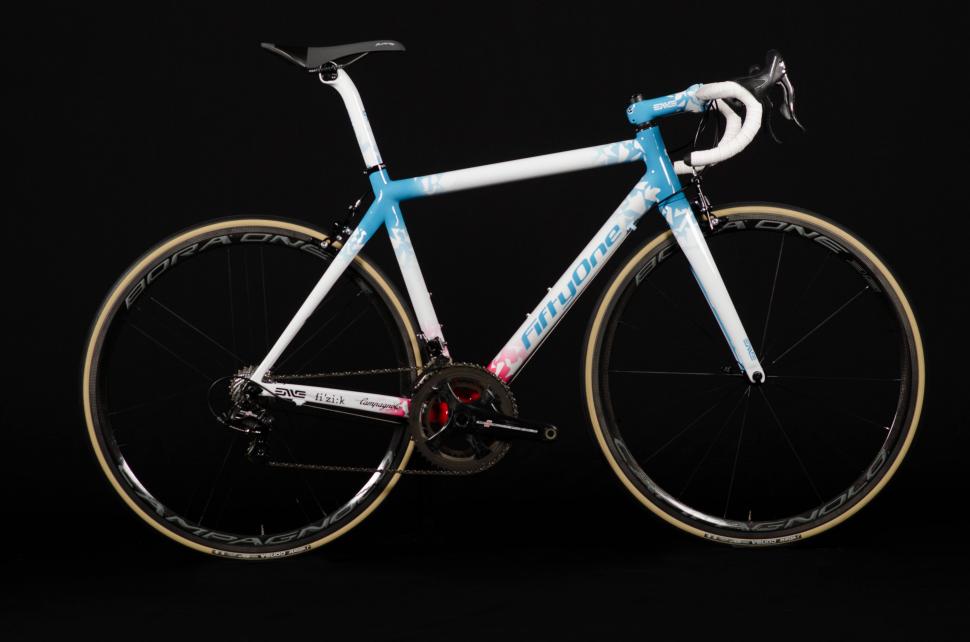 FiftyOne, a young framebuilding company based in Ireland, debuted at last year’s Bespoked show and scooped the coveted Campagnolo Choice Award, and it’s been a busy year since with expansion into the US and a visit to the North American Handmade Bicycle Show, the exhibition that inspired Bespoked UK. The company will once again be bringing some lovely bikes to the show for all to admire. 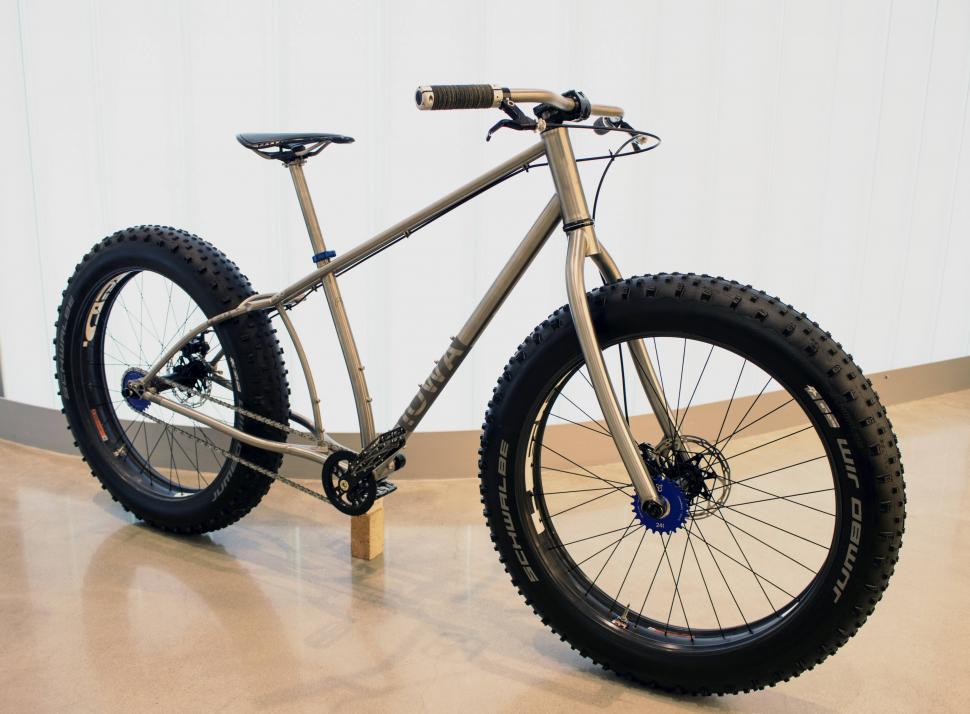 The University of Iowa Hand Built Bicycle Program will be coming to the UK to show its handmade frames at Bespoked for the first time. Each frame has been produced by a student of the university’s Fabrication and Design: Hand Built Bicycle class, which has been going since 2010 and has seen 110 students passing through the course. 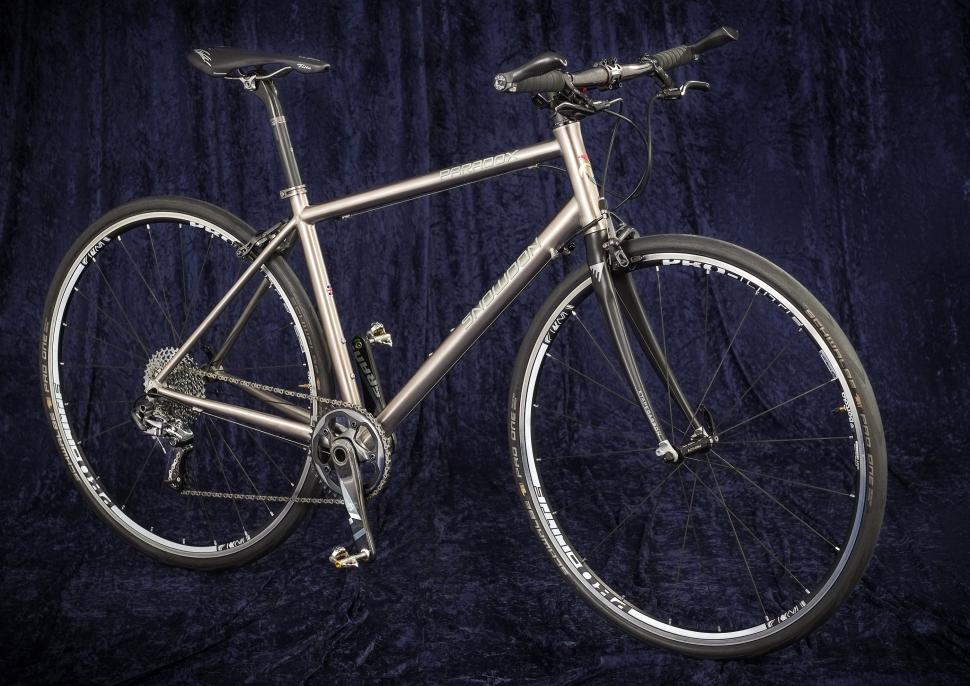 Bristol-based Snowdon Bikes will be showing the Paradox, a flat bar titanium road bike that road.cc recently reviewed, but with a new disc brake version that is able to take wider tyres. Previously disc brakes were an option but the company is going to make it a standard model and will cost £1,900 for the frame.​ 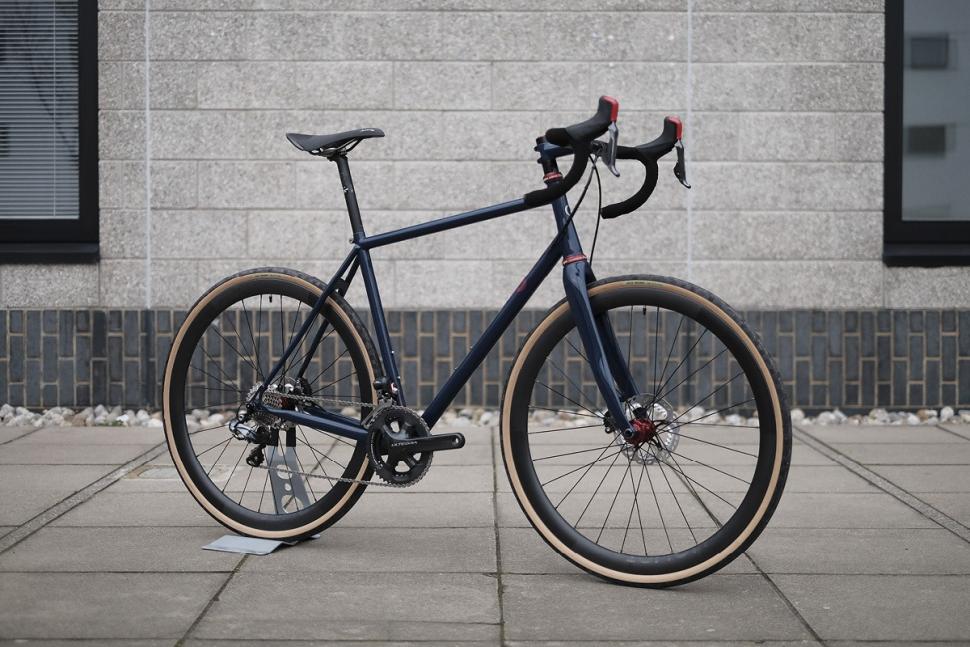 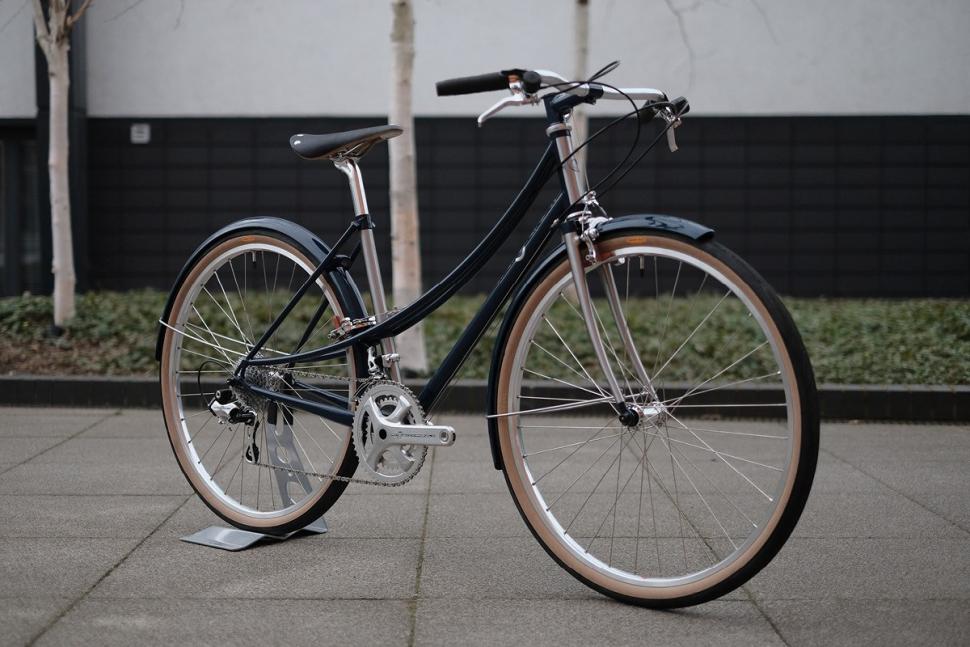 If you like what you see, August will happily build you the same bikes, the Mixte costs £4,600 for the complete bike and the road bike is £5,500.

See the Flying Gate at Bespoked 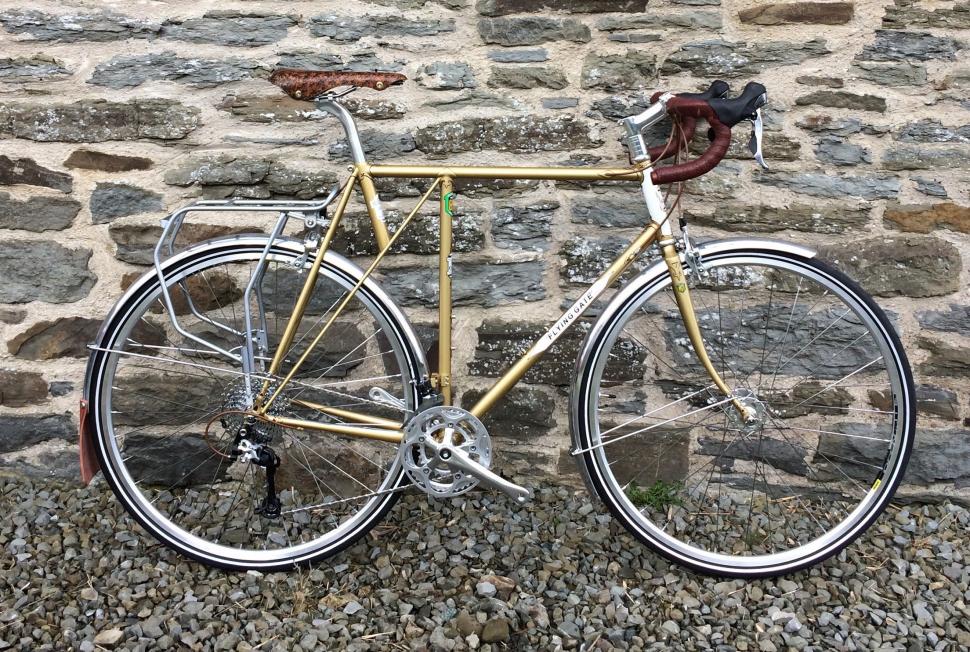 Beaumont Bicycle will be showing the curious Flying Fate road bike, two of them in fact, which should turn some heads. It’s a bike designed for Audax riding with sensible things like mudguards and a rack. 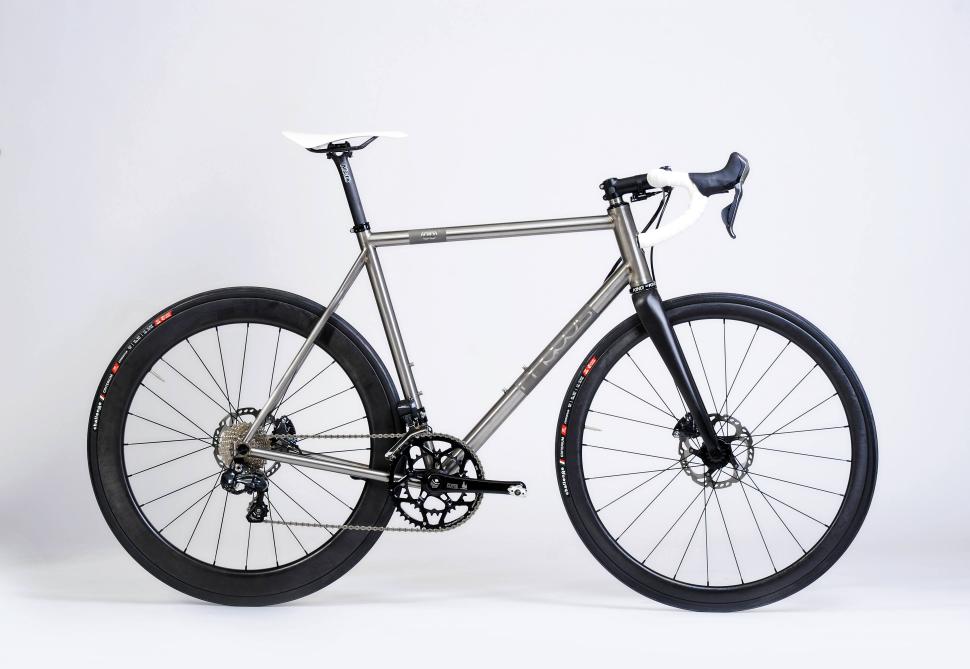 Bespoked might be a UK show but it does have an international feel, and from Germany will be Mawis Bikes, a regular at the show for the past few years. Here’s a photo of the latest project, a full titanium frame with Shimano Di2 and lightweight Tune components.

Métier Vélo arrives in the UK 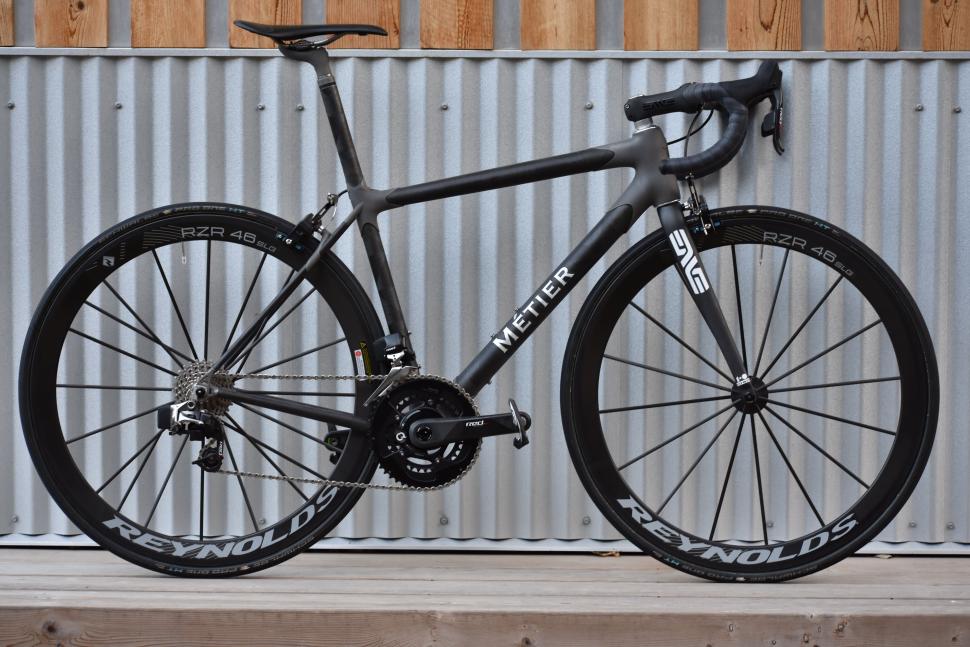 Founded in 2013, Salt Lake City-based Métier Vélo specialises in, much like the Bastion higher up this page, combining 3D printed titanium lugs with carbon fibre tubes to create what it says are light, strong, tough and repairable performance frames. 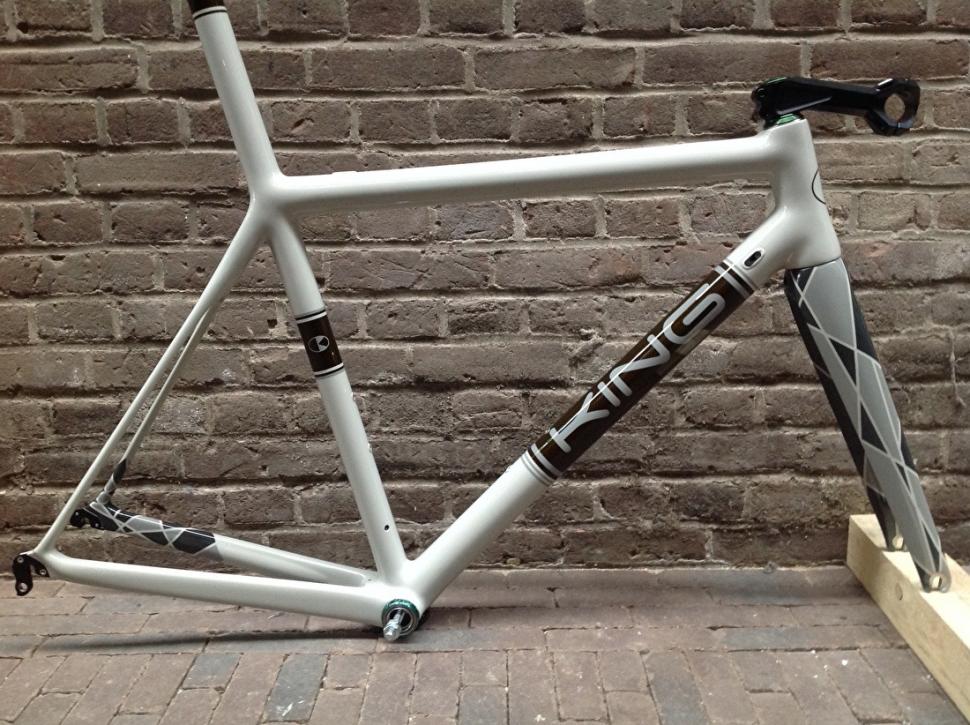 Established in 2002, King FrameWorks specialises in hand made performance and competition frames where weight with a choice of steel, titanium or carbon fibre. The framebuilder is returning to Bespoked for the second time and will be bringing along the King Daedalus in both carbon fibre and titanium versions, and a King Icarus mountain bike steel frame. 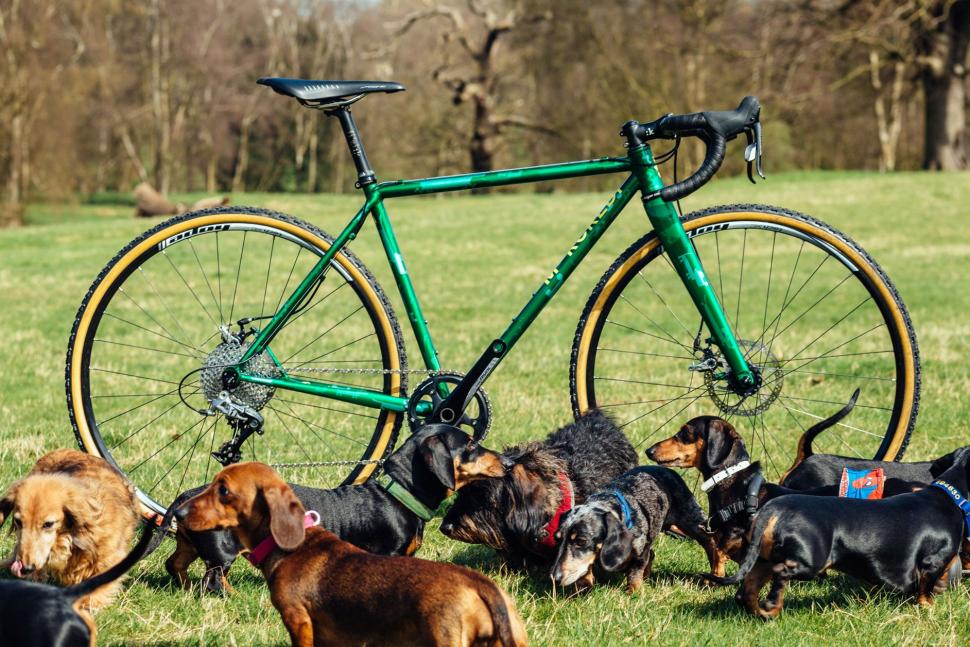 Some nice bikes I think you’ll agree, but we’ve saved the best till last. Mercredi Bikes has sent us these photos of a bike apparently inspired by sausage dogs for being “innocent looking but absolutely unstoppable”. This bike has been built for Robin who will be using it at the upcoming Dirty Reiver, 3Peaks, Griduro and local cyclocross events and races.

The frame has been constructed from Columbus Zona tubing with a matching Columbus Mud fork. But the best thing is that it’s been treated to a pretty special and unique paint scheme inspired by the sausage dog, including a flying dog tribute to the iconic Columbus Dove logo. They’re so happy with the result they’ve even got 100 pin badges made up and will be handing them out at the show.

We'll see you at Bespoked!