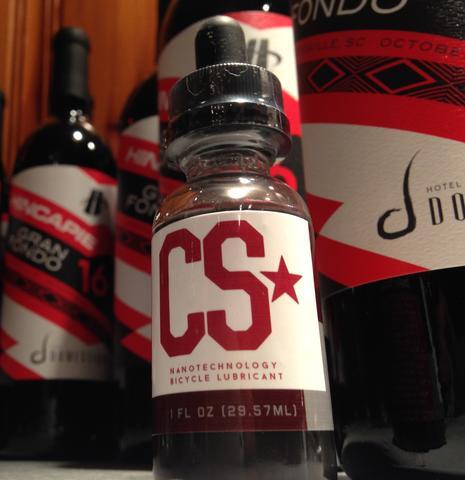 Lasers and bicycles aren’t two technologies that often come together in the same sentence, but North Carolina State University has developed a new chain lube using a laser process that promises to provide hundreds of miles of low-friction lubrication while requiring just a small amount compared to regular chain lube.

The new chain lube has been developed by the North Carolina State University in partnership with Cyclestar Nanotech, using a process that involves a laser that produces nano- and micro-sized particles held in a lightweight carrier oil.

Cyclestar Nanotech, the company that aims to commercialise the new lube, says the laser process produces particles of a very specific size and high level of hardness that bonds with metallic surfaces like chains and creates a ball-bearing effect between surfaces.

The lube essentially involves laser-produced balls of carbon and graphene being suspended in a light and simple synthetic oil. There’s no wax, Teflon or other chemical additives. It’s a process that has been patented by the university professor that created it, Jay Narayan.

It won’t be cheap, though, a 30ml bottle will cost $40 in the US, but the company is quick to add that the bottle will last as long as a standard bottle of lube because only a very small amount, half an eye dropper, is needed to lubricate a chain.

It’s not the first cycling company to claim the benefits of nanotechnology for a bicycle product, but Cyclestar reckons this is the first laser-produced nano cycle lube. We certainly can’t think of any other products. We're definitely looking forward to trying it out if it becomes available in the UK.

If it all sounds a bit gimmicky to you, the  UCI Continental team Holowesko-Citadel-Hincapie Racing have signed up to use it and it’s been endorsed by Felt Bicycles founder Jim Felt.

Here’s a video showing how to apply the new lube.