Offering the performance of a race bike with geometry and equipment choices that won’t leave you needing to visit a chiropractor after each ride, Canyon’s Endurace has since its launch in 2014 been a popular bike for the German direct-sales brand. And now it’s available with disc brakes along with a raft of other changes that might just make it a key contender in the crowded endurance bike category. 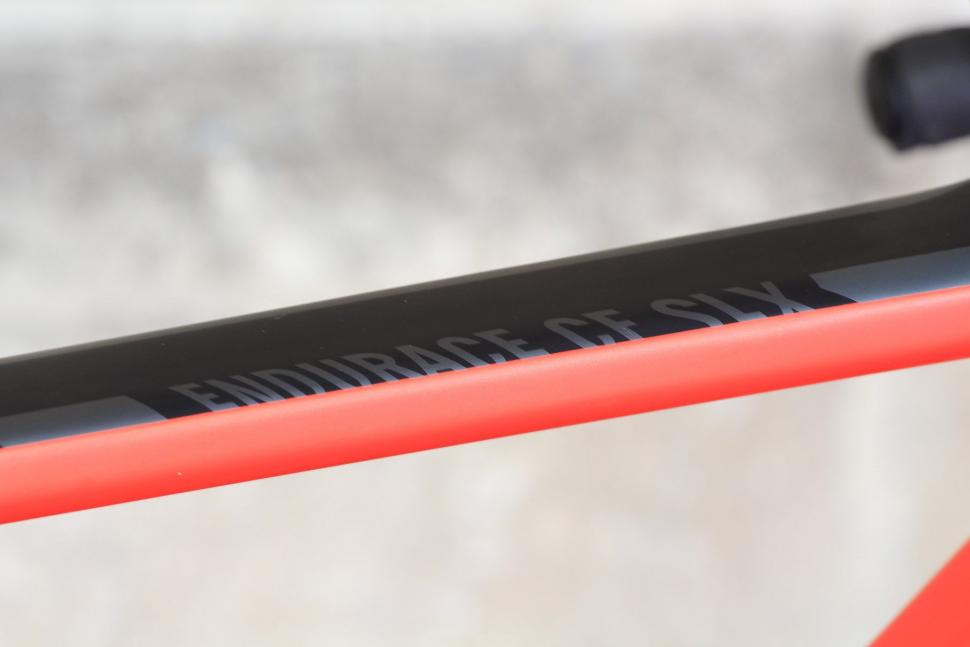 Disc brakes across the range

Most bike manufacturers have led their disc-equipped road bike charge with endurance models. This is because adoption by the pro ranks has been slow (and currently stalled with the UCI disc brake trial suspended) but also because the reality is that the vast number of non-racing cyclists buying endurance bikes like the benefits that disc brakes bring in stopping ability and year-round dependability, and aren't worried about such issues as wheel change speed, weight and aerodynamics. Some are concerned by such factors. Not everyone is a fan. This bike, a size medium with Dura-Ace Di2, comes in at 7.3kg (16lb) which is reducing the weight penalty to regular rim braked bikes. It's not exactly heavy, and if you're not racing, a bit of extra weight probably isn't the end of the world. Especially when you can stop on a dime in the dry or wet as you can with disc brakes.

But the adoption of disc brakes is not the only change to the new Endurace. The frame is light with a claimed 820g for the size medium with a 300g fork, figures that are competitive with non-disc road frames, showing Canyon really has managed to keep any such weight penalty to a minimum. It's also using 12mm thru-axles at both ends, with easily removable skewer levers so you can shed some grammes or just clean up the appearance. If you forget the thru-axle handle, a regular 5mm Allen key will operate the thru-axle. 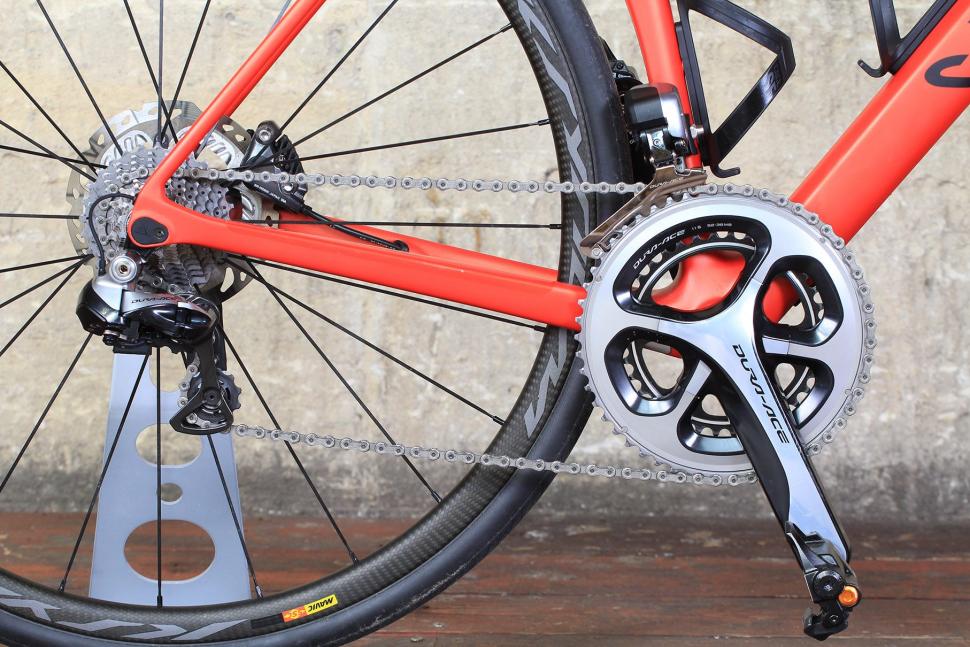 The bike pictured here is dripping with the shiniest equipment, from the Dura-Ace Di2 groupset with RS805 hydraulic brake calipers in flat mount guise to Mavic Ksyrium Pro Carbon SL Disc wheels and matching 28mm tyres. And it’s all yours for £5,099, which is a competitive price for that level of equipment, as the roundup of rivals at the bottom of the article makes quite clear. Of course, you can't walk into a local bike shop and swing a leg over the bike before you try, instead, you have to buy it online and wait for the bike to arrive in a box.

Not got five grand burning a hole in your bank account? Canyon has your concerns. There are six models in the Endurace CF SLX range with prices starting £2,999. Each bike shares the identical frame and comes with hydraulic disc brakes, no cable actuated stoppers at all, and there are 28mm tyres across the range. If that's still too expensive, you only have to look at previous Canyon launches and hope there's likely to be a more affordable Endurace CF SL version along at some point in the future. 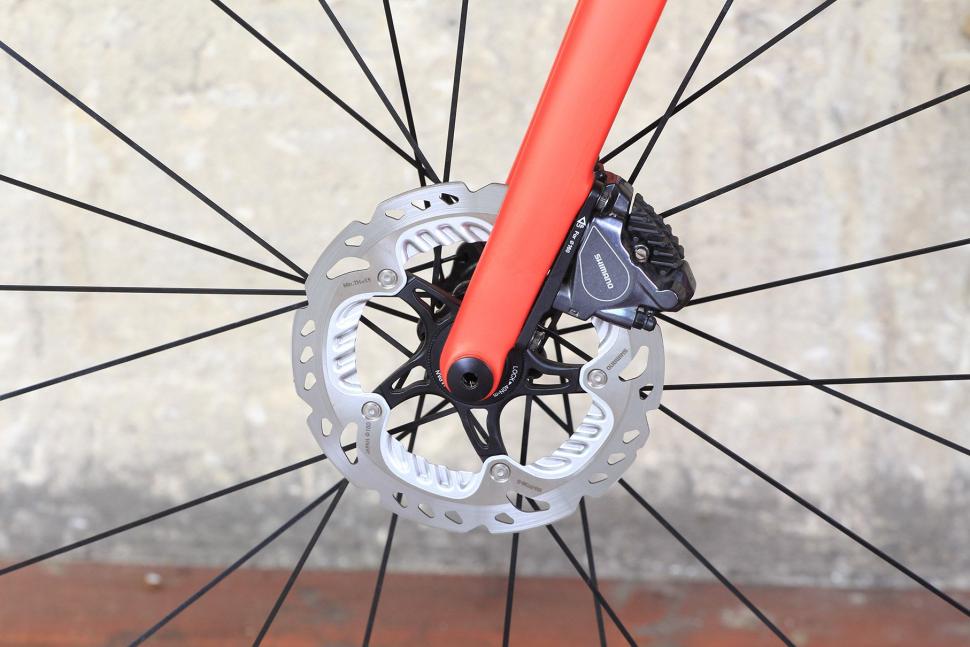 Geometry hasn’t really changed with the new bike, the shape of the bike is the same as the previous Endurace CF (which is still available for 2017 if you don’t want disc brakes). One interesting change though is the addition of an XS size to the seven available sizes, with the previous 3XL size getting the chop, but it’s now covering a wider height range, from 158cm to 204cm.

Ultimately the geometry defines the ride, performance and fit of a bike. The main thing to take away here is that the Endurace is a little shorter in reach and taller in stack than the racier Ultimate, but the emphasis really is on little: Canyon has been much more restrained than some bike brands and the front-end really isn’t massively tall. 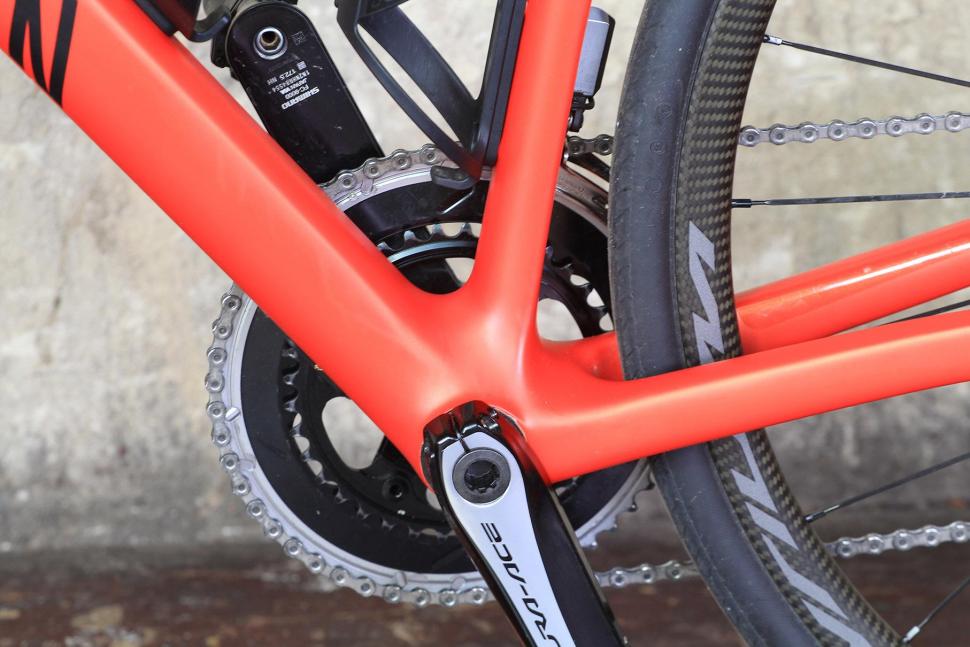 The Sport geometry, as Canyon calls it, means the size medium we’ve got here has a 578mm stack and 382mm reach. The head tube length is 157mm, but that measurement doesn’t tell the whole story: Canyon has added more length to the fork so the front-end is higher. Other key changes include longer chainstays, coming in at 415mm, which helps to produce a slightly longer wheelbase for a more stable ride, though at 990mm, the Canyon is shorter than many other endurance bike rivals. 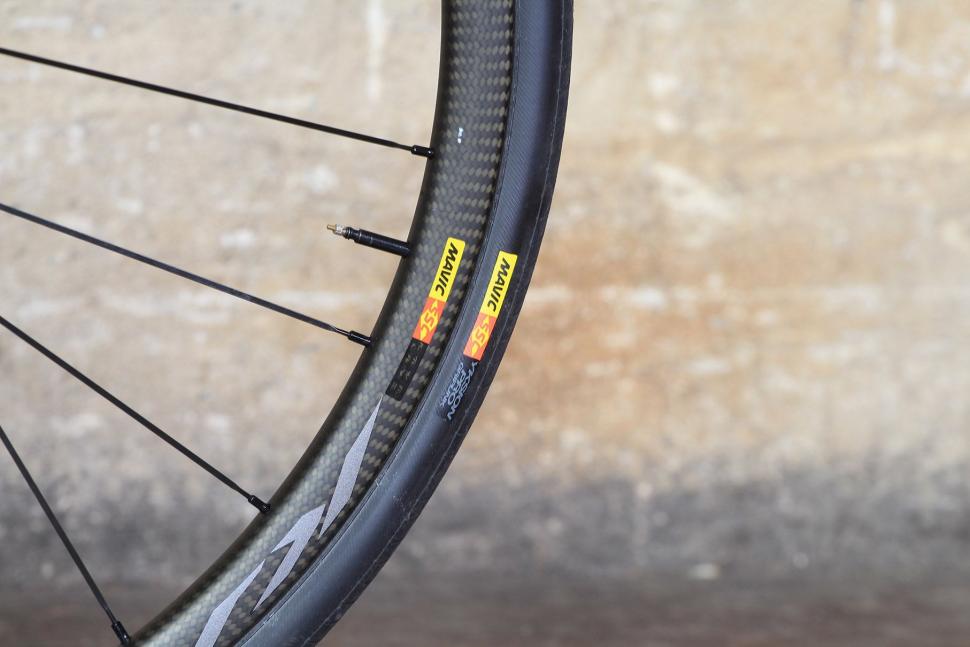 Comfort comes both not just from the fit of the bike, but also the compliance the bike can provide when riding over rough roads. Manufacturers are heading in many different directions to produce endurance bikes that can iron out the bumps; Trek has its fancy IsoSpeed decoupler, the new Specialized Roubaix utilises a suspension damper in the head tube, Bianchi has CounterVail vibration damping carbon tech in the Infinito and the Pinarello Dogma K8-S has a rear suspension damper. 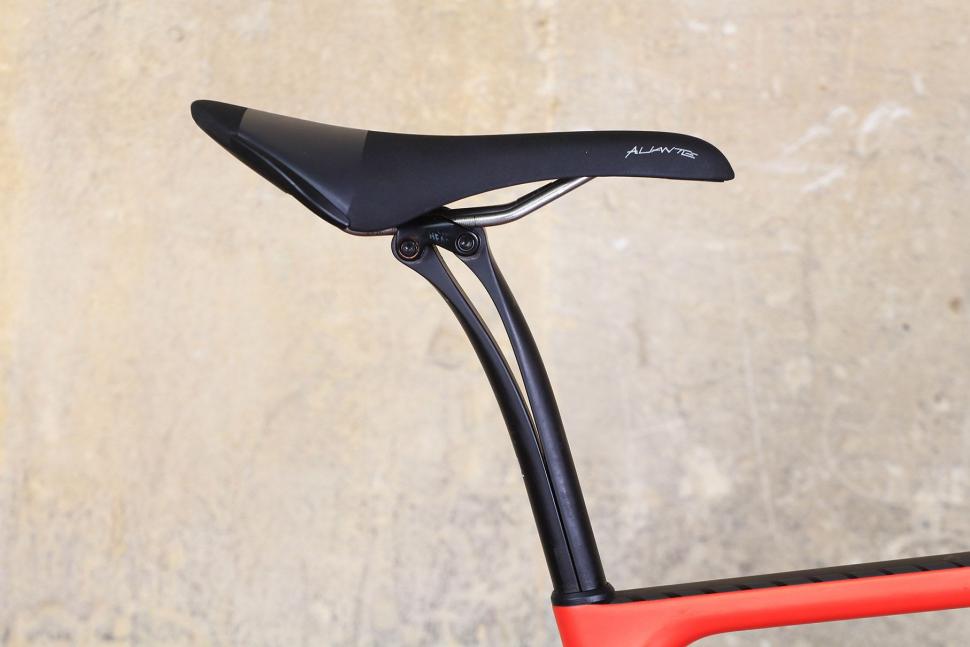 Canyon takes a much simpler route, the Endurace is completely free of gimmicks. One of the key features is the quite excellent VCLS 2.0 seatpost. The seatpost is split right down the middle into two halves, and the idea is that it can more back and forth more than a regular post. It works too: I’ve been using one on my own personal road bike for several years and it provides a noticeable increase in seated comfort. 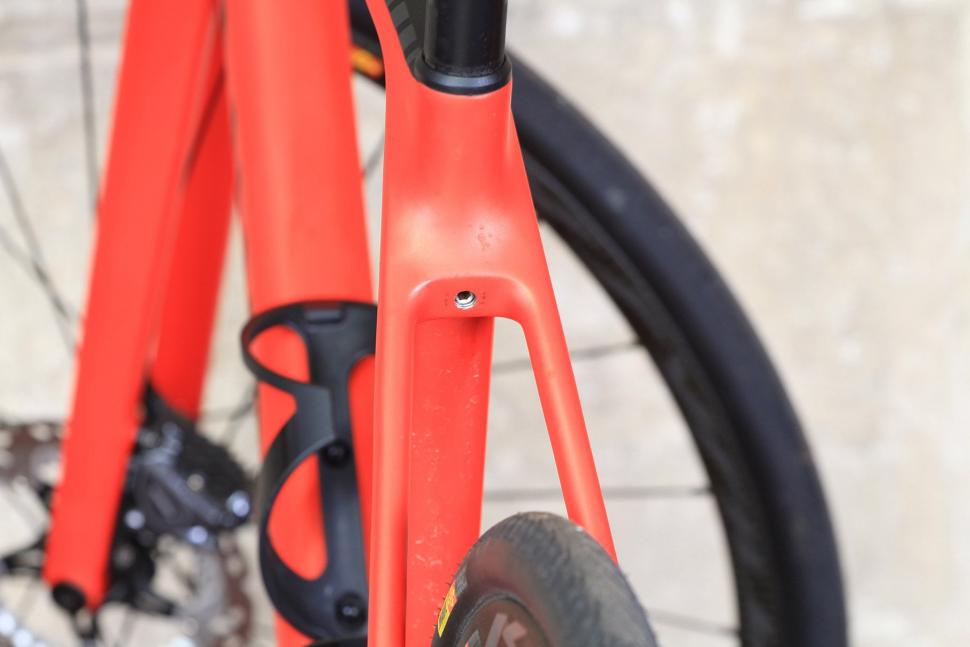 To help the seatpost out, Canyon has increased the effective bending length by using an integrated seat clamp, borrowed from the Ultimate CF SLX. The clamp is positioned low down the seat tube and there’s a soft seal above it that allows a bit more flex. 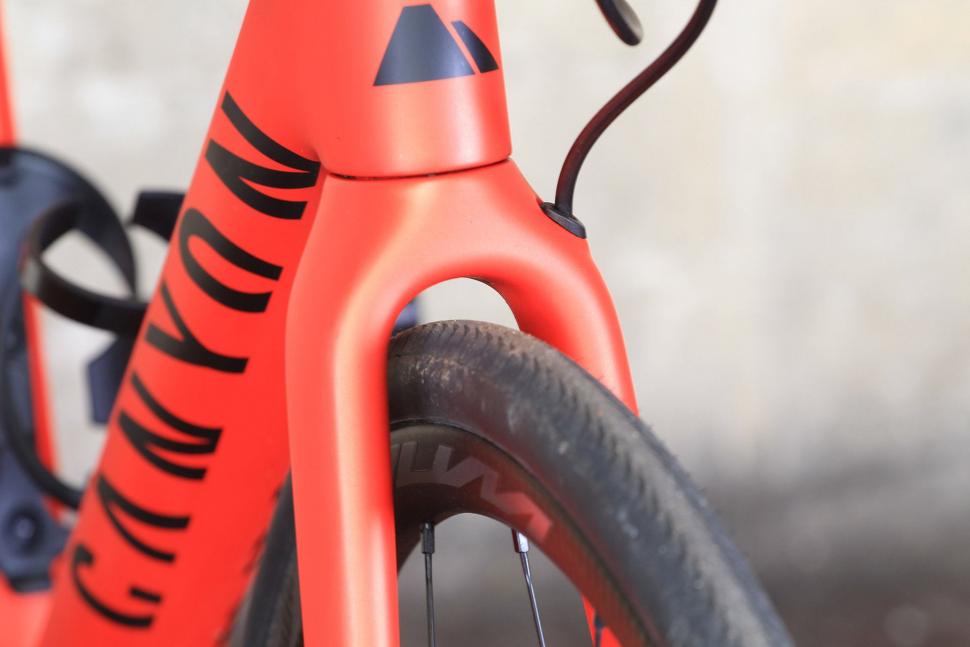 The other key component choice in the battle against a rough and jarring ride is the use of 28mm tyres, which are standard right across the range. It’s a good choice, wider tyres hugely popular with most regular cyclists recently cottoning onto the benefits and speed fat tyres can provide. There’s plenty of space in the frame and fork for wider, up to 33mm tyres would be accommodated, which certainly opens up the interesting prospect of sticking a gravelly tyre on there for mixed terrain cycling. 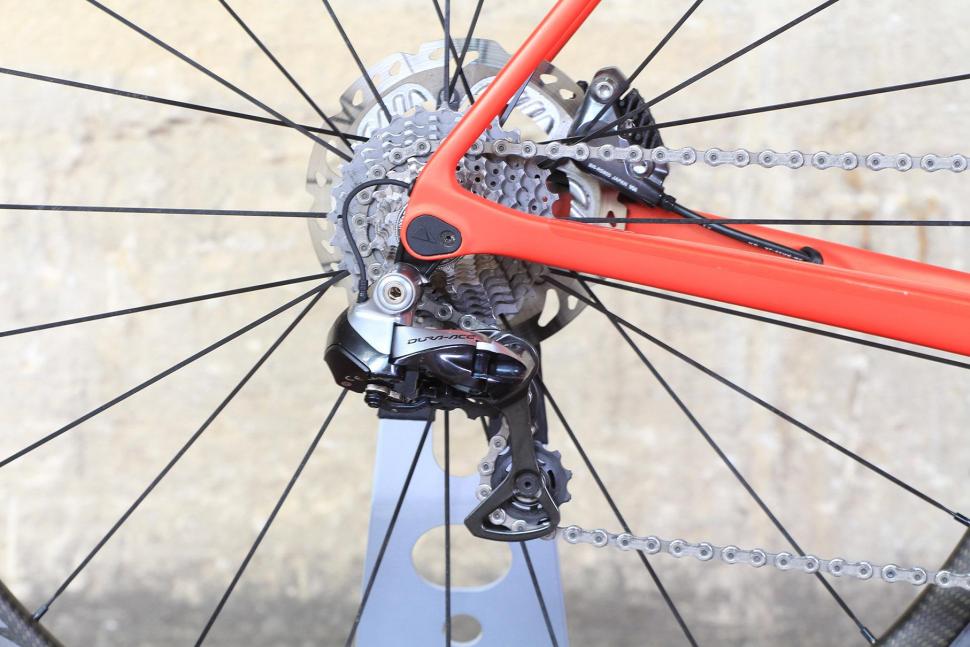 Then there is the aerodynamics. Our range-topping model gets the new H31 Ergocockpit, an integrated handlebar and stem developed based on the H11 Aerocockpit that was developed for the Aeroad. Canyon says the new bar is a bit lighter and compliant than the original, and it has compact short reach drops and a 6-degree back sweep to reduce the reach to the bars. 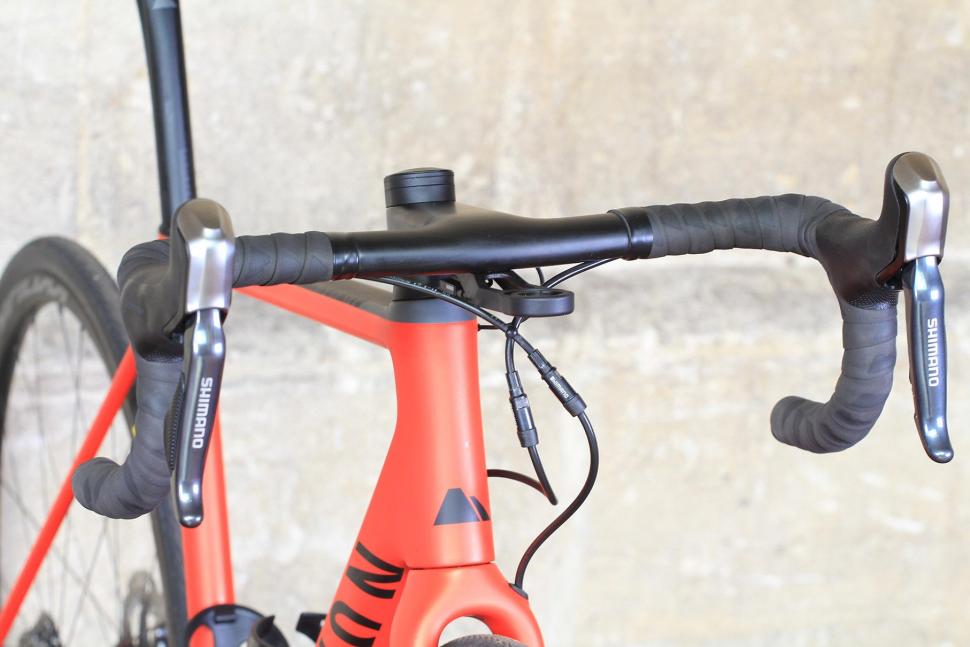 Why fit an aero bar to an endurance bike? Because Canyon has focused on improving the aerodynamic performance of the Endurace over the previous model, using lessons learnt doing the same with the Aeroad and Ultimate, reasoning that everybody can benefit from lower drag bikes. The head tube has an hourglass shape, the fork legs are narrow, both the seat tube and down tube have a D-shape profile and the bottle cages are positioned lower in the frame. 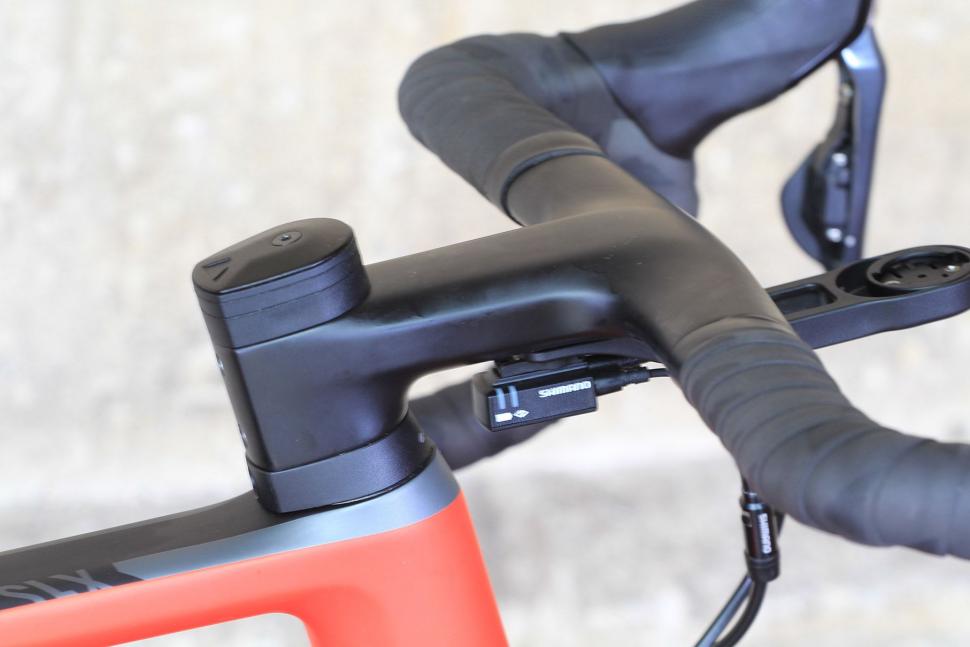 And what difference do these changes make? “The Endurace CF SLX (221.2W) tested with our new H31 Ergocockpit gives away a marginal 1.4 W to the Ultimate CF SLX Disc Prototype fitted with our H36 Aerocockpit,” says Canyon. “Any extra drag can be attributed to the higher stack featured on the Endurace CF SLX as well as our S15 VCLS 2.0 seatpost and the H31 Ergocockpit’s slightly less aerodynamic form.”

Yes, your eyes aren’t deceiving you, there are no mudguard mounts. That’s because Canyon offers the Inflite which can take mudguards, wide tyres and has disc brakes, but it might be an immersion that could make some potential customers look elsewhere if they're in the market for a bike that can be used year-round. Of course, plenty of cyclists never go anywhere near a mudguard, which is the reason I generally avoid my local weekend club run in the winter. 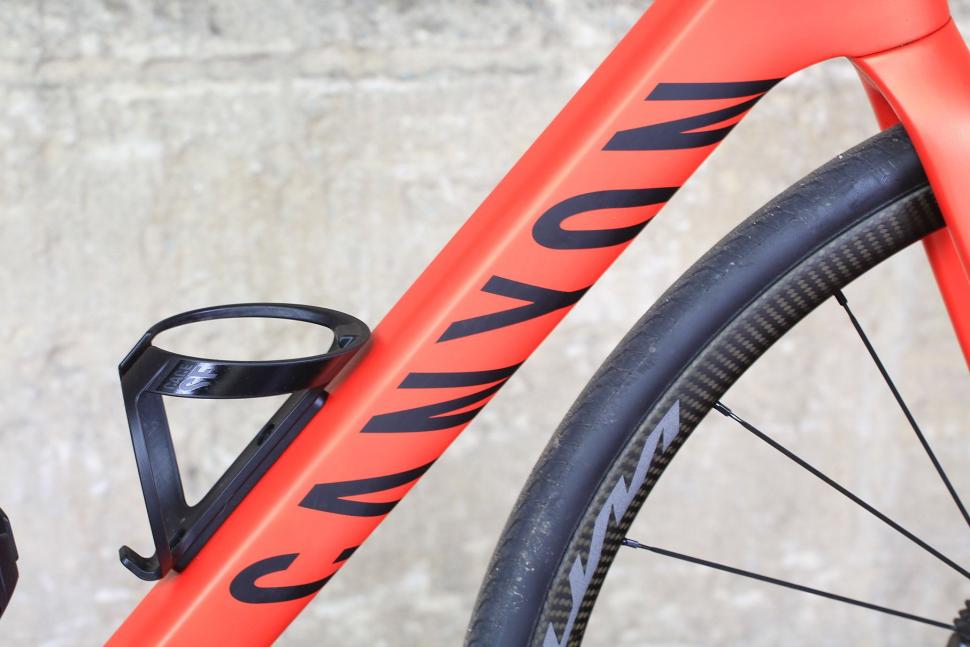 There’s internal cable routing with Di2 compatibility, and even the hydraulic hoses are hidden inside the frame and fork as much as possible. It’s a very clean looking bike, no superfluous details, pure function over form. Canyon has been accused of its lack of colour choices in the past, but it’s getting a bit bolder and this Kerosene Red option is a cracking looking bike. Doesn’t match the road.cc team kit at all though! 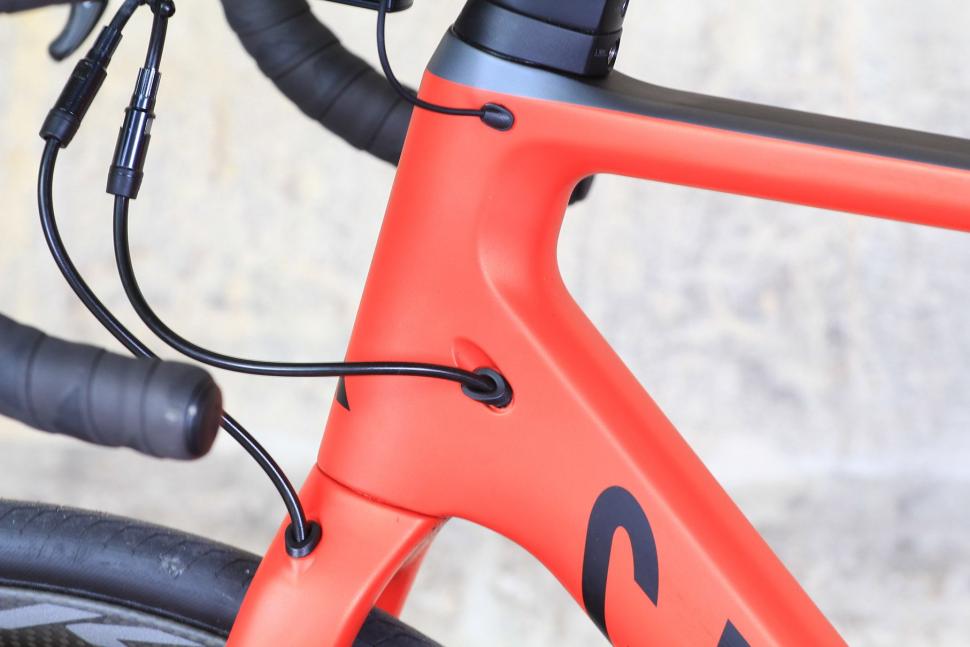 The latest Trek Domane in SLR 7 Disc (£4,800) offers front and rear IsoSpeed decouplers, with the rear being adjustable to suit different preferences or situations. The specification shows where Canyon has a real advantage, as the Trek comes with a Shimano Ultegra Di2 groupset with Bontrager Affinity Comp Tubeless wheels and 32mm tyres. Don’t judge the bike just on the equipment, though, the heart of the bike is the frame, which houses some impressive tech. You can read our review of the rim braked Domane SLR here.

With a much more similar specification but costing £400 more is the Giant Defy Advanced SL 0. Like the Canyon, the Giant doesn’t employ any gimmicks to smooth out the ride, instead very careful carbon fibre layup and tube shapes, delivering one of the nicest riding bikes in this sector. This model gets a Dura-Ace Di2 build with Giant’s own SLR 0 wheels and 25mm tyres.

The very newest bike in this endurance bike category and the most intriguing is Specialized’s brand new Roubaix. Gone are the Zertz elastomer inserts and very tall front-end and in comes a new suspension damper unit house in the top of the head tube and a racier geometry, albeit with adjustability if you want a more relaxed position. At £5,500 the Roubaix Pro UDI2 comes with an Ultegra Di2 groupset, Roval CL 32 Disc wheels with 26mm Turbo Pro tyres and the company’s own CG-R seatpost, which is designed to provide more seated comfort.

So there you have it, a complete rundown of the new Canyon Endurace CF SLX. I’ve waffled on for far too long so all that’s left now is to get some miles in and see how it performs. Full review soon.