The recent Eurobike show provided a good opportunity to see some of the latest products lined up for 2017, and here are some standout items, including new tyres, helmets, shoes, carbon cranks and a smart trainer. Something for everyone, don't say we don't spoil you. These new products are all 2017 model year but rather confusingly some of these products are going to be available this autumn. Let’s dive straight in for a closer look at the latest goodies.

Hands together, Easton is back making cranks. It launched the new EC90 SL at Eurobike, a carbon fibre crankset that uses the Cinch direct mount system from RaceFace (the two brands are part of the same company now) which makes it easy to swap chainrings. At the moment it’s a 1x offering which makes it ideal for cyclocross and adventure bikes, the two applications where single ring drivetrains are really popular. There will be a 2x spider though eventually for double chainring setups. It can be fitted to most bottom brackets such as BB30, BB86, PF30 and old fashioned 68mm external threaded. Claimed weight for a 172.5mm crankset with a 40t chainring and no bottom bracket is 442g. Many years ago Continental started the trend for directional road bike tyres with the Attack and Force, and at Eurobike it unveiled the third generation version. It reckons there are benefits to this approach because the front tyre carries less load, so it can be lighter and narrower for better aerodynamics, while the rear carries more weight and needs to offer more puncture resistance, so is wider and beefier. For 2017 the German tyre company has completely redesigned the tyres with a new construction utilising Black Chilli rubber and a Vectran puncture belt, with a 23mm front tyre (Attack) that has a thinner tread compared to the 25mm rear (Force). 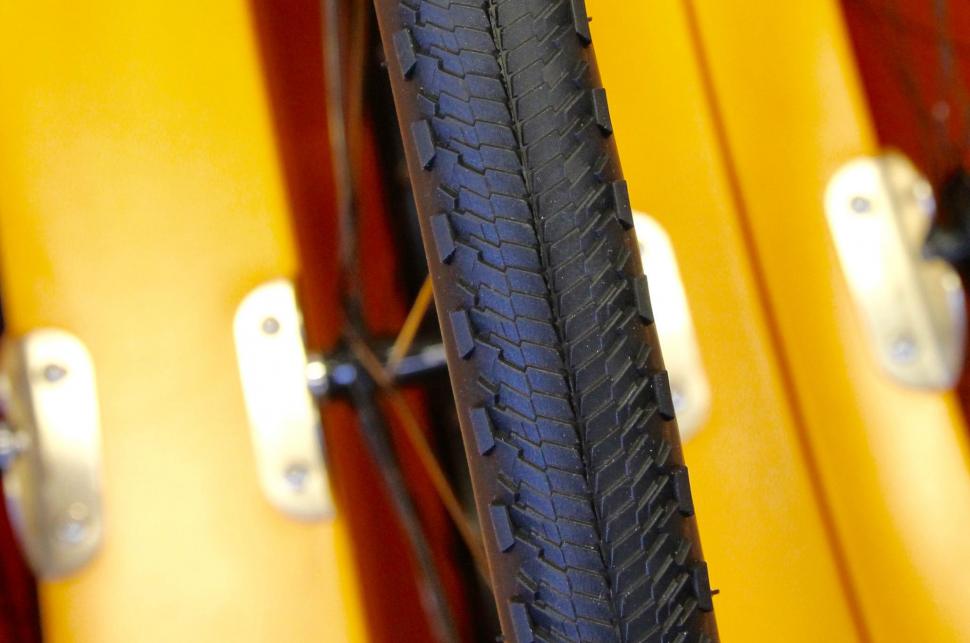 There are new and updated cyclocross tyres, and one, the Speed King CX, that looks ideal for gravel and mixed surface riding. Continental describes it as being designed for racing over “solid, dry or frozen terrain” but we reckon the low profile centre section and ramped shoulder knobs would be ideal for a spot of gravel and tarmac action. It comes in 32 and 45mm width options.

Road tubeless pioneer Hutchinson has produced some good tyres over the years, but arguably they’ve not really enjoyed the level of success they probably deserved. Tubeless technology advances at a rapid, though, and for 2017 it has ushered in the new Fusion 5, which replaces the previous Fusion 3. Whatever happened to the Fusion 4 we wondered? Probably the same thing as the CAAD 11 and the Bianchi Oltre XR3... 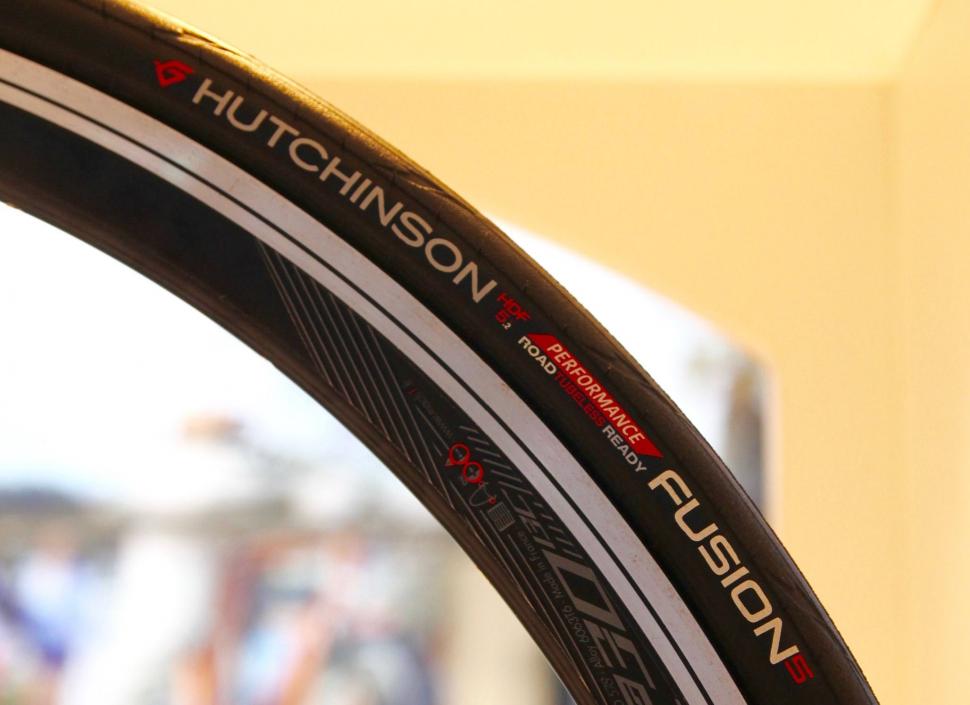 The new tyre has been two years in development and features a new HDF 5 compound, which has already been used in its clincher and tubular tyres. The new tyre is available in five versions: Galactik is the lightest at 250, the Performance is 285g and the All Season is 295g, with width options including 23 and 25mm. Those two years of development have led the company to claims is has improved the tyre in every measurable way: rolling resistance, puncture resistance, comfort, grip and durability, all key components of a racing bicycle tyre.

Kask is best known for supplying helmets to Team Sky, but it’s moving into the eyewear market with the launch of Kask Optics. The glasses are made in Italy and use high-quality Zeiss lenses, while a nifty hinged arm design allows the arms to be rotated for storage, as well as allowing adjustment of the fit on the face. There is also an adjustable nose bridge to further customise the fit. 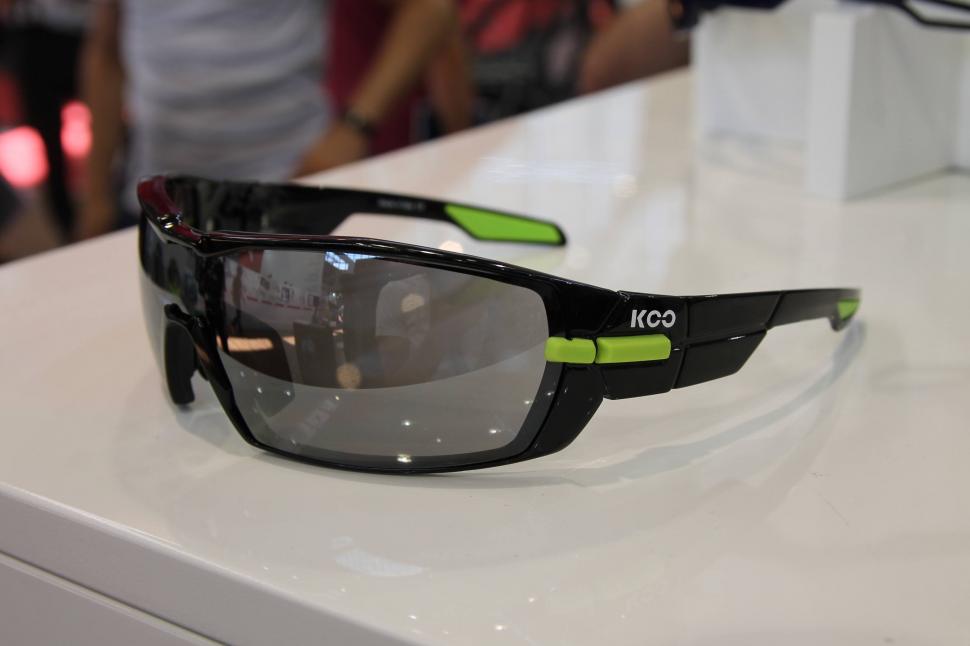 The Optics are available in a range of 12 colours and various lens tints, and you’ll get two lenses, clear and tinted, in the box. Lenses can be changed quite easily: there are two hinged plates that lock the lens in place. It’s a little fiddly the first time you do it but it’s quite straightforward thereafter. 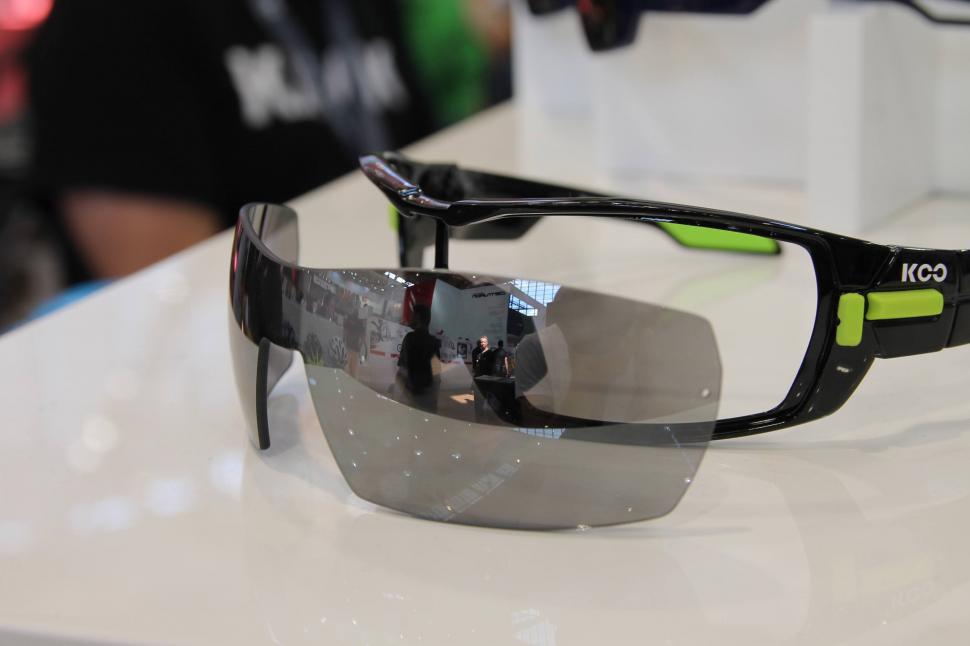 As you’d expect, the arms are also designed to work nicely with the straps on a Kask helmet. 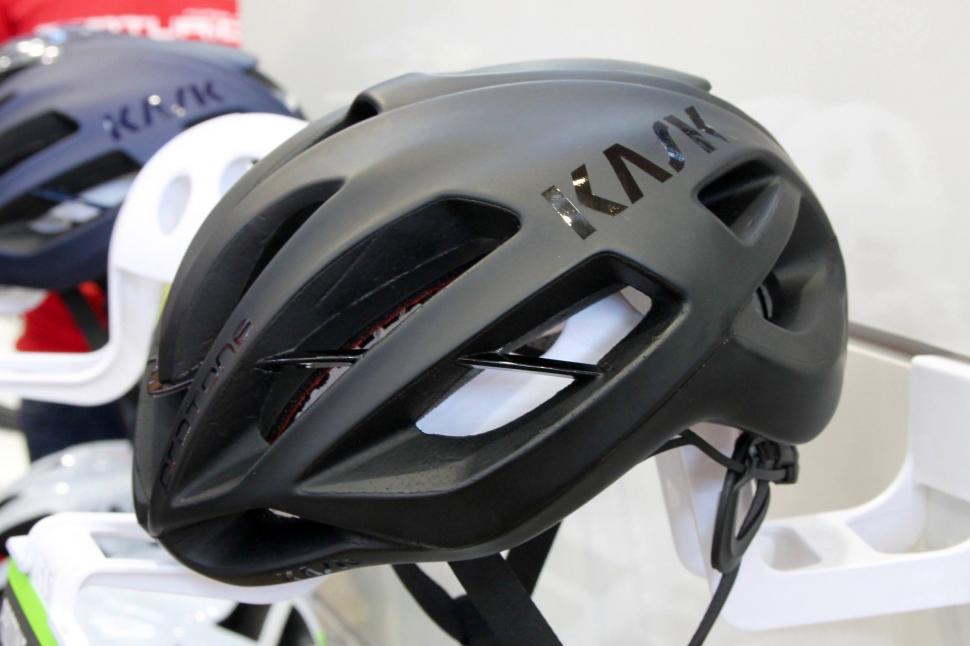 The Protone is the top-of-the-range aero model in the company’s helmet range, as used by Chris Froome to Tour de France victory this summer. It hasn’t changed for 2017, but it is now available in a wider size range including a small. It’s also available in this new matte black colour option. 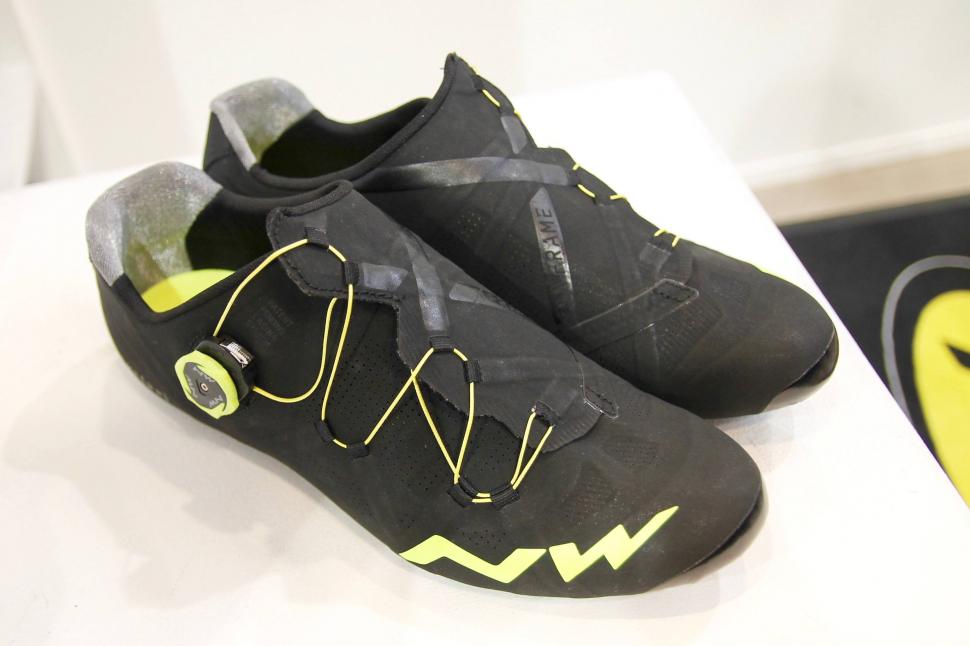 The X-Frame technology, as Northwave is calling it, does provide a very snug and comfortable foot, as I found out when I tried on a pair during the unveiling at Eurobike. Other details include a full carbon sole that gets Northwave’s stiffest rating, a heel cup lined with a grippy material to prevent heel lift, and a minimal construction that keeps the weight down to a claimed 220g. Best known for its bright orange Octal helmet, Swedish company POC has been quietly expanding its range of eyewear, with different styles to suit different tastes. The Do Blade here uses Carl Zeiss lenses with an anti-fog coating and a large wraparound design aimed at providing massive coverage. 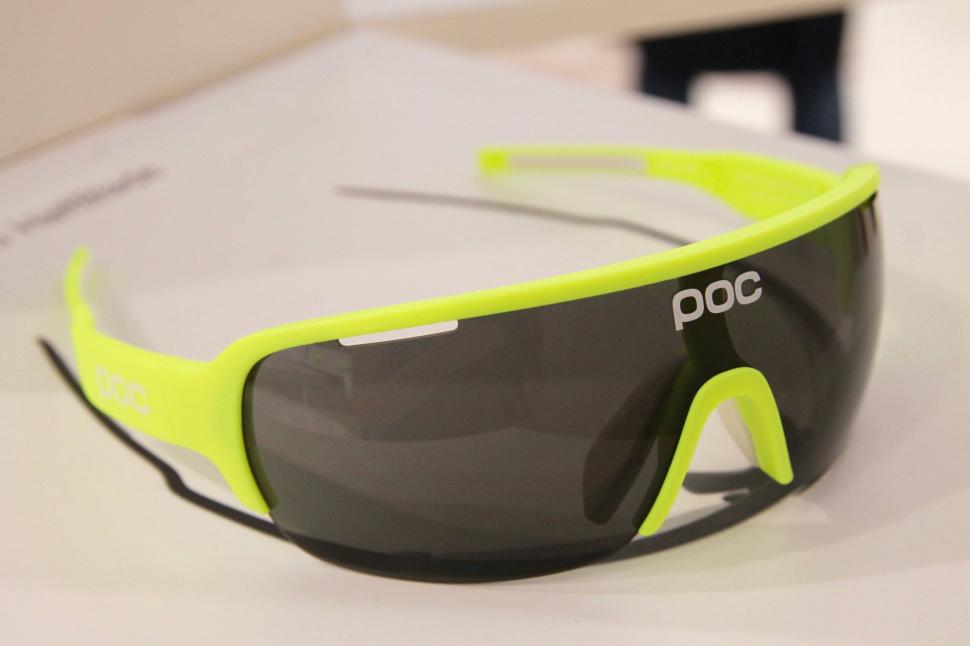 There’s also the Do HalfBlade version as well. 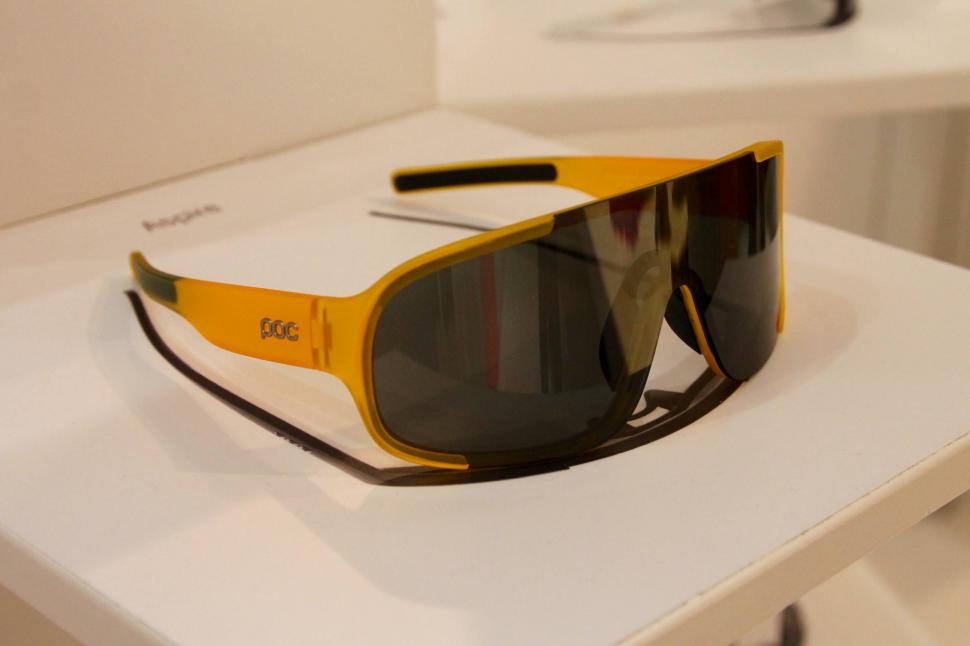 This is the Aspire, with a similar large mirrored wraparound lens made by Carl Zeiss. Hydrophilic rubber grips on the nose and arms keep the glasses in place despite sweat or rain. Here’s the Crave +, which combine a lightweight and flexible grilamid frame with a Carl Zeiss lens and an open frame design intended to minimise the lens steaming up during activity. Lastly, if you want a regular looking pair of glasses at home on or off the bike, these Require glasses look the part, yet combine the same technology as the performance-focused glasses above. FLR has updated its range-topping F-XX II road shoe, with new dials that thanks to a grippy material around the outer edge are easier to use on the move. They’re also replaceable now, following feedback from sponsored professional cyclists. The upper has been dramatically redesigned and gone are the seams for a smoother appearance, and also a bit of weight loss. The mesh material in the various vents has been updated as well, and there’s a revised heel gripper. These should be available this November. Chris Froome has already won the Tour de France in Sidi’s new Shot shoes, and they’ll be available to purchase in 2017, I can't wait to get my feet into them. They have a new rubber hole design and an adjustable air vent at the front of the full carbon sole, but the most noticeable new feature is the new upper, which places both rotary dials on the tongue. This is said to be more aerodynamic and provide a more comfortable fit as well. 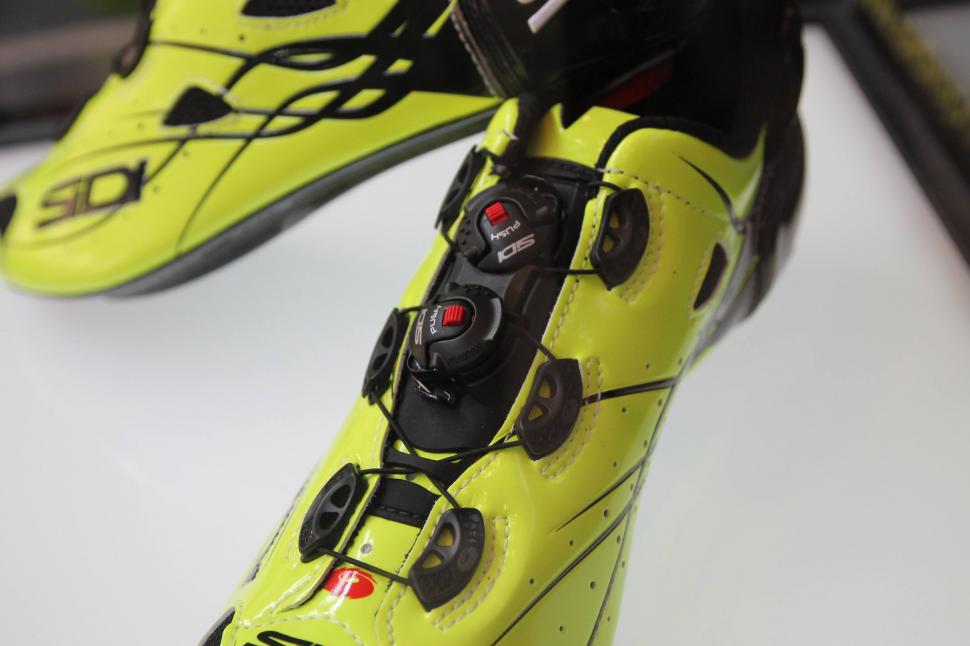 Production shoes will have the familiar heel adjustment (Froome was spotted racing a sample without this feature, presumably he’s riding a full custom shoe) and there is extra reflectivity to help you stand out in the dark.

Winter is arriving which means for many cyclists it is time to drag the turbo trainer out of the shed, or maybe it’s time to invest in a new one? The big development over the past couple of seasons has been the explosion onto the market of direct drive trainers, which require removal of the rear wheel and offers a more realistic road feel, and are smart, meaning they can communicate with your smartphone or computer. Most can be hooked up to a programme like Zwift, which is able to control the resistance of the trainer for a fully immersive training session. 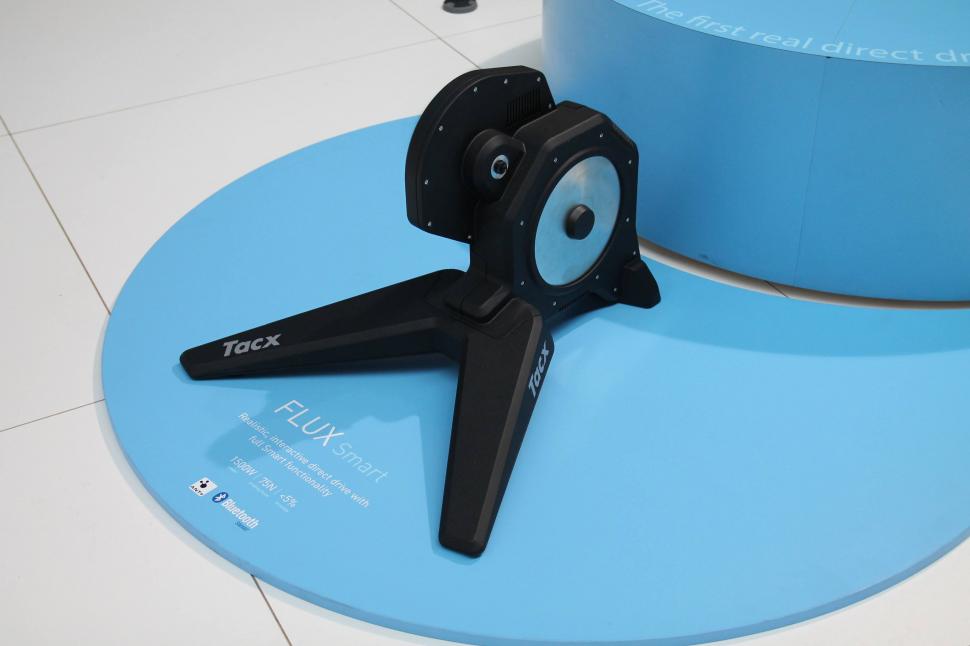 The new Tacx Flux is essentially a more affordable version of the Neo, the company’s range-topping direct drive trainer, and will cost £699 compared to £1,200. Inside the Flux is an electromagnetic resistance unit and a 6.7kg flywheel that can simulate up to 10% slopes and handle up to 1,500 watts during a sprint. It uses Bluetooth and ANT+ so is compatible with a wide range of apps and computers.