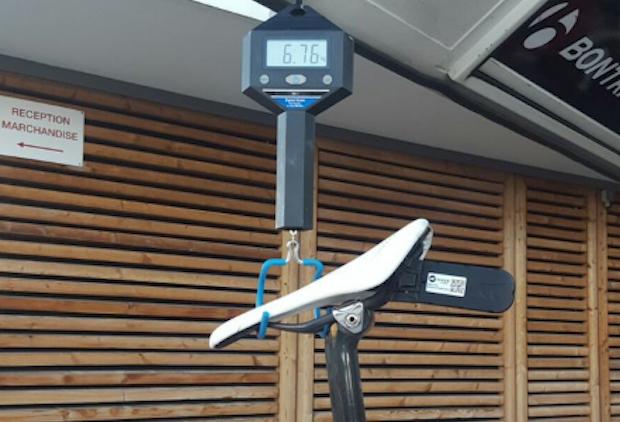 Since the year 2000, all professional race bikes have had to adhere to the UCI’s 6.8kg weight limit. But the advances of technology means it’s now very easy to build a bike that is under the weight limit, and yesterday Trek-Segafredo’s Bauke Mollema shared this picture of his Trek Emonda. It weighs just 6.76kg.

That his bike weighs just 6.76kg is no surprise. The Emonda has a frame weight of just 690g and it is possible with some very exotic parts to get it down to just 4.6kg! Mollema’s bike sticks to more conventional equipment if you call a full Dura-Ace Di2 groupset conventional. Doubtless the mechanics will need to add some weights to bring it up to 6.8kg.

Some extra weight on my bike for tomorrow and it already can be much lighter. 15 years the same: rule from the past! pic.twitter.com/Q7sWi7E0vO

As we talked about the other day with Chris Froome’s Pinarello F8X Light, getting a race bike under 6.8kg isn’t too difficult these days, but ensuring it doesn’t dip under is obviously critical. There’s only so much that swapping carbon for aluminium and adding deeper section wheels will gain you in weight, so at some point lead weights will need to be added.

It’s not clear what the Trek mechanics will do to balance out the weight of Mollema’s bike. Weight added under the bottle cage mount is an easy one because you can add or remove weight as needed depending on the specific build of the bike that day.

The rest of his build includes shallow section Bontrager Aeolus 3, which save weight over the standard Aeolus 5. Bontrager provides the handlebar, stem, bar tape and saddle. Mollema uses an SRM power meter to track his performance.

Calm before the storm in the Pyrenees. 2 very hard stages to come! pic.twitter.com/ZwqrT5bTYU

That weight is with pedals and the GPS stick attached to the saddle, supplied by Dimension Data to provide real-time data from riders during the race. It’s not clear how much weight that adds to the bike, we’ve heard reports of it being in the region of 80g.

The Dutch rider has his pick of Trek’s bikes, including the Domane and Madone, but for today’s mountain stage, which features Mont Ventoux (well, most of it anyway) he’ll be riding Trek’s lightest ever frame, the Emonda. Mollema is a climber and will be hoping to feature in the final selection on the key mountain stages.

Speaking in 2015 about which bike he chooses for a stage and why, he says, “The Madone is a fast bike and you save watts [energy] on flat roads. This year I was fresher in the last week of the Tour compared to the last years and maybe that's also because of the energy I saved the first 10 days. I changed bikes in the Pyrenees because in the mountains weight is very important. The Émonda is a great climbing bike and the weight of the bikes is a few 100 grammes less than the Madone. In the Tour the general classification was decided uphill so I wanted to have the best bike for climbing.”

He also adds that switching between the Madone and Emonda is easy.

“Changing from the Madone to the Émonda was easy. I had spent so much time on the Émonda in the beginning of the season that I felt at home on it straight away. I did the last 10 stages on the Émonda and I didn't change back to the Madone. Well, except for the last day in Paris. I did this because of the cobbles on the Champs Elysees. They might not look so on TV but they are pretty bad, and the Madone with its Isospeed technology was, in my opinion, the best choice for this stage. Simply, more comfort. It was easy to change the bikes because our mechanics are fantastic and they have the bikes dialled in exactly the same position,” he says.