Fabian Cancellara won on a yet-to-be-released version of Trek’s endurance bike. Now we have new pics
by Mat Brett

This is the bike that Trek-Segafredo’s Fabian Cancellara rode to his third Strade Bianche victory over the weekend. Look closely and you’ll see that it’s a brand new version of the Trek Domane (all pics Paolo Ciaberta). 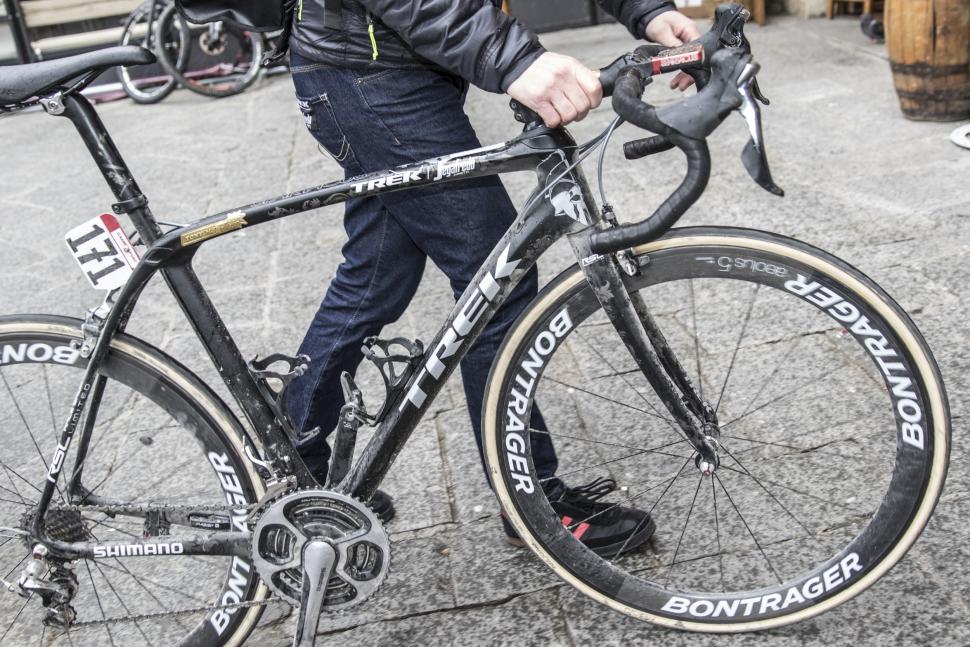 He’s also one of the few riders with electronic shifting at their disposal who chooses to stick with mechanical (cable-operated) shifting. Again, that’s equipment he uses whatever the road surface. 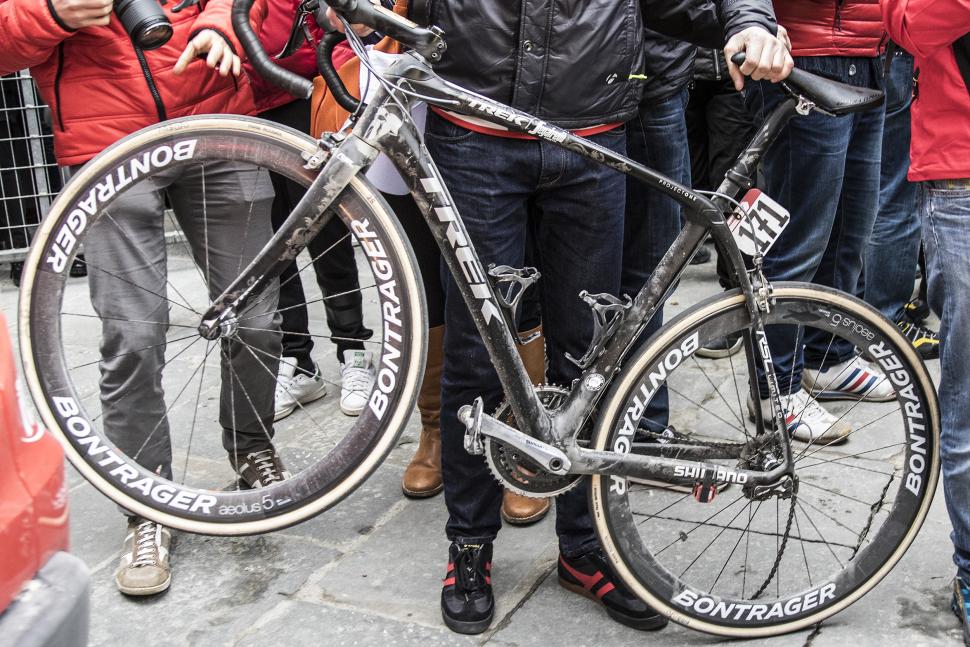 Cancellara’s bike geometry isn’t the same as you or I could get if we walked into our local Trek dealer. Stock Domanes come with what Trek calls its ‘endurance geometry’. It’s designed to be performance-focused, not as aggressive as Trek’s H1 or H2 fits but more stable. 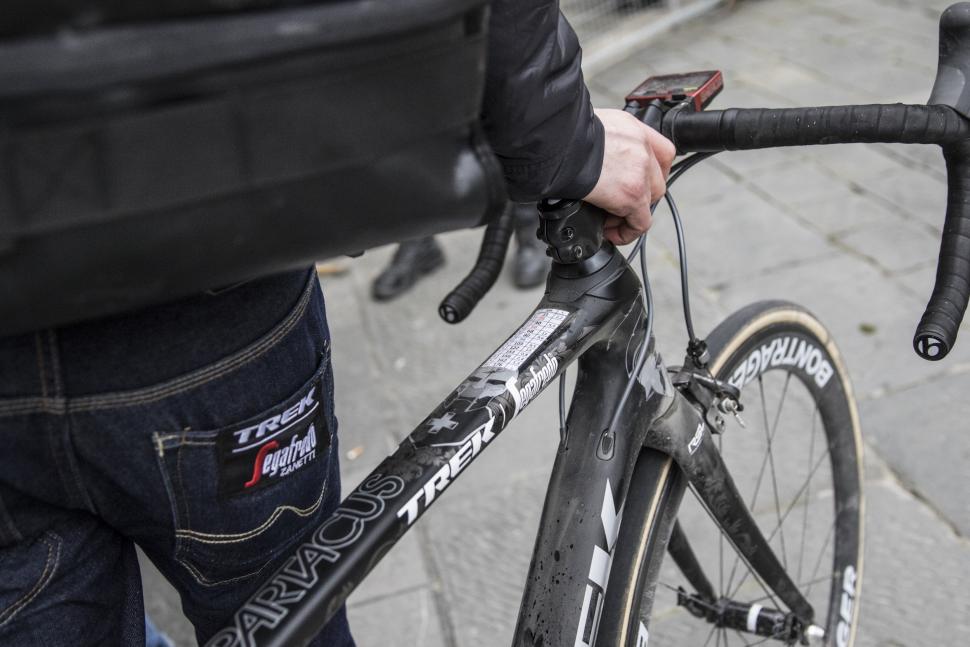 Cancellara’s bike, however, is built with a long reach (the horizontal distance from the centre of the bottom bracket to the top of the head tube) and a low stack height (the vertical distance between those two points) courtesy of a lengthy top tube and a short head tube. The result is a lower and more stretched riding position for efficiency.

The Swiss rider also opts for a very long stem (we’re guessing 140mm or even 150mm) and a handlebar with a long reach. The wheel’s are Bontrager’s own Aeolus 5s with 50mm-deep carbon rims, and the groupset is Shimano’s top-level Dura-Ace – the mechanical version, as mentioned above.

Look closely and you’ll see that the brakes are direct mount with each arm attached straight on to the frame/fork rather than via a central bolt. No current Domane takes direct mount brakes so we’re saying this is definitely an as yet unannounced new version. 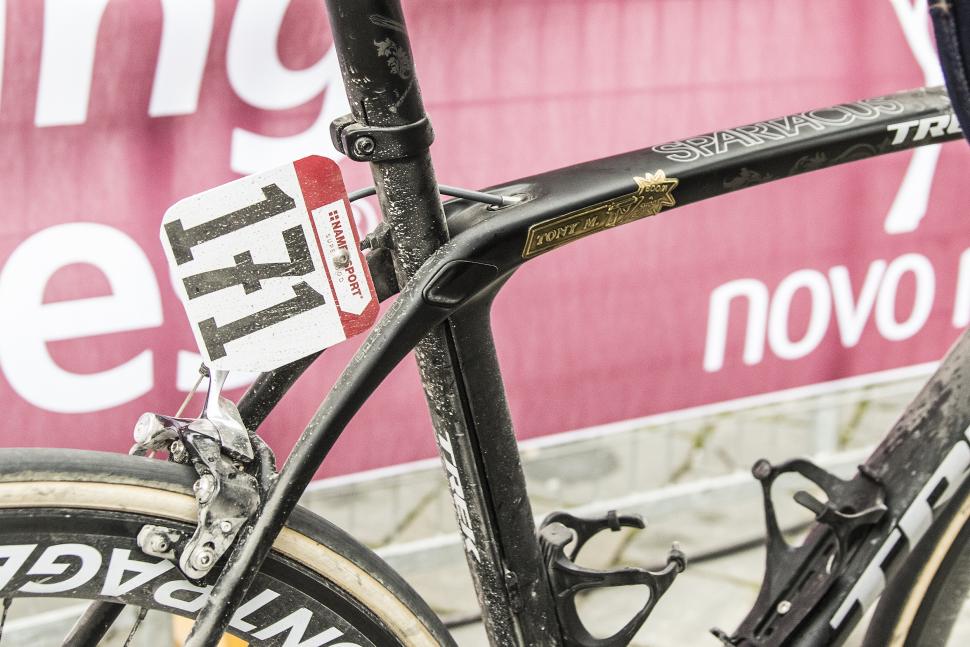 Check out the IsoSpeed Decoupler too – the feature that isolates the movement of the seat tube from the rest of the frame. The design in that area is different. It looks to us as if the pivot has been moved backwards slightly, and the cover has definitely altered in appearance.

The seat tube looks to be a different size and shape too. We couldn't see it on our initial picture but in these new shots it appears that the seat tube is split longitudinally. These pics suggest that the design has altered considerably. It looks like the front portion is fixed to the top tube while the rear portion is free to pivot back and forth to provide more movement at the saddle.

There's also what looks to be some sort of wedge between the two portions of the seat tube level with the top of the bottle cage. Perhaps that controls or limits the movement in some way.

The entry ports for the cables are in the down tube rather than in the head tube, but the most interesting feature of the front end is at the top of the head tube, below the stem. There’s a bulge and a ridge in that area that weren’t there before. 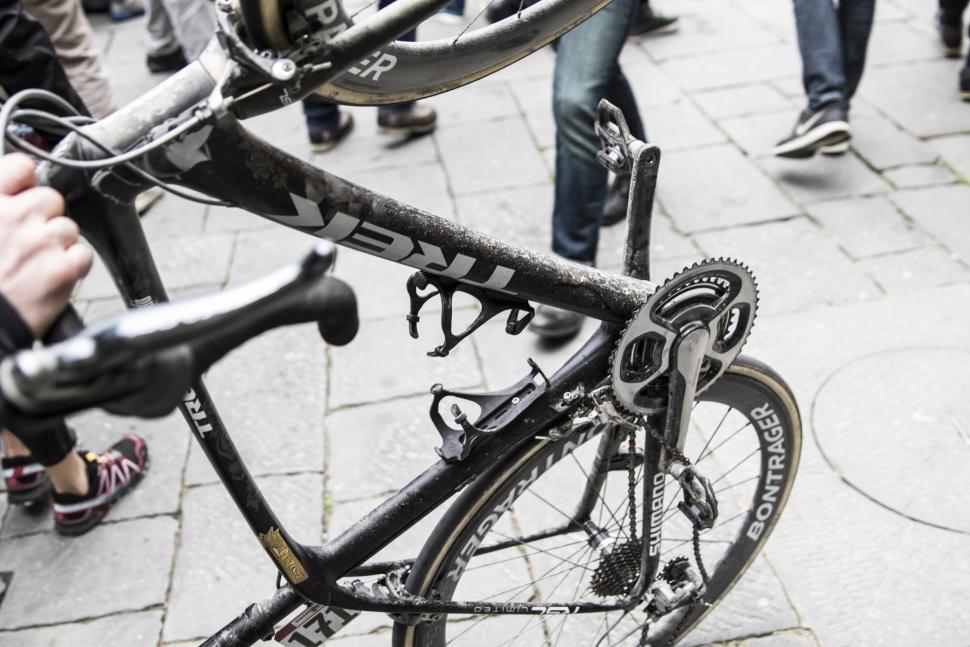 What could it be? Well, the IsoSpeed decoupler is designed to deal with bumps and vibrations at the back of the bike but there’s no similar arrangement at the front. Okay, the Domane’s IsoSpeed fork is intended to provide some good ol’ vertical compliance but there are no moving parts as such. This is purely speculation but we reckon Trek has been busy designing something to help deal with bumps and vibrations at the front. Exactly what, we couldn’t tell you, but there’s something going on in there! 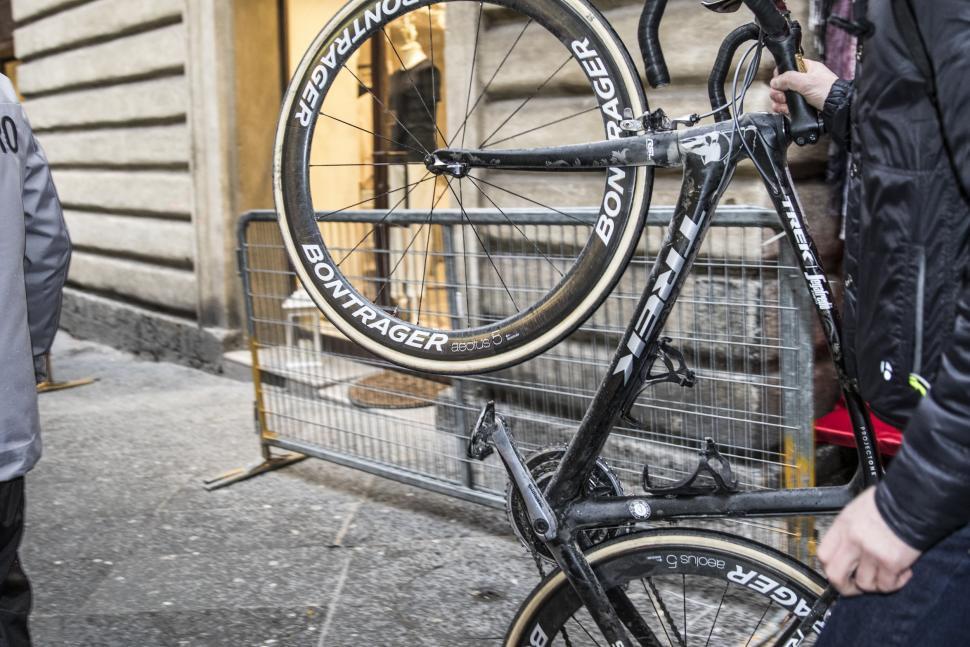 The fork still sweeps forwards and has an unusual, slightly rearward dropout placement, but it looks a different shape from the current version.

Naturally, we asked Trek for a comment and, naturally, we got this reply: “Trek is always in development of new products with our race team. Trek will provide information on new products when they are available for all riders around the world to enjoy.”

That’s a standard reply meaning, “Clear off, we’ll tell you when we’re good and ready.”

We checked the UCI’s List of Approved Models of Frames and Forks and there’s no new Domane listed on there yet, but that gets updated only periodically. It'll be on there next time around for sure.

Stay tuned for more news of the new Domane soon. It’s sure to make an appearance over the cobbles in the next few weeks.

All pics © Paolo Ciaberta  (Thanks also to Andy at La Corsa.cc)