The Vitus Zenium VR Disc is a comfortable and highly controllable aluminium road bike that comes with a Shimano 105 groupset and TRP Spyre mechanical disc brakes for just £899.99. That’s a stunning price. 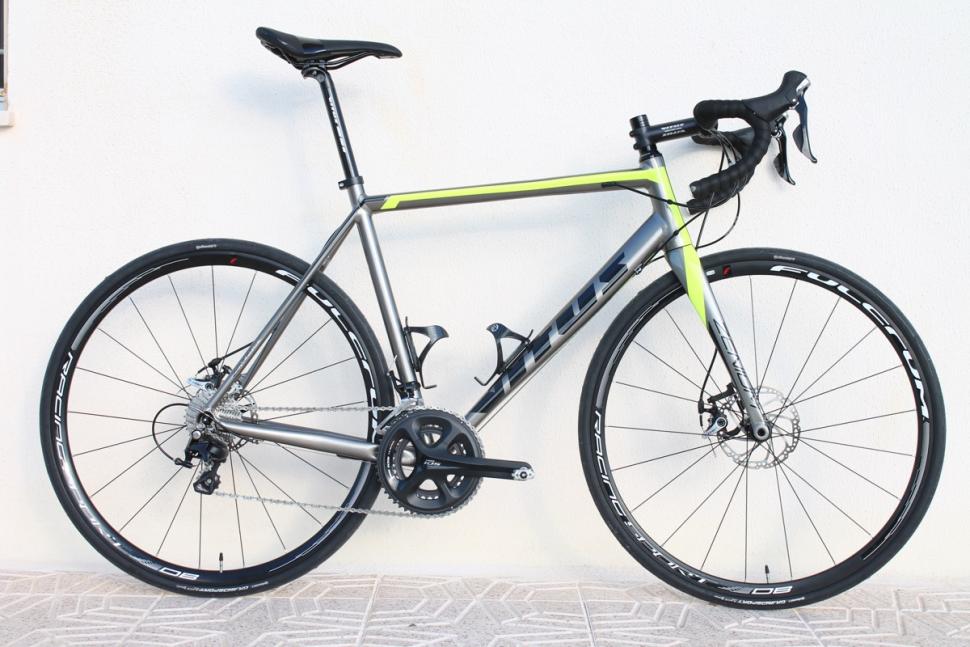 Vitus flew me out to Spain last week to check out the 2016 road range. We’ve already published First Rides on the Vitesse Evo race bike and the Venon Disc.

As with those other bikes, I got about 3 1/2hrs on board the Zenium VR Disc. It was mostly rolling terrain with a couple of big hills thrown in, including the Coll de Rates.

You could easily forget that this is a sub-£1,000 bike because it handles like a more expensive setup. Okay, you have to pay a weight penalty compared to more costly rivals, but the overall ride is very good and the quality of the components is exceptional for the money. 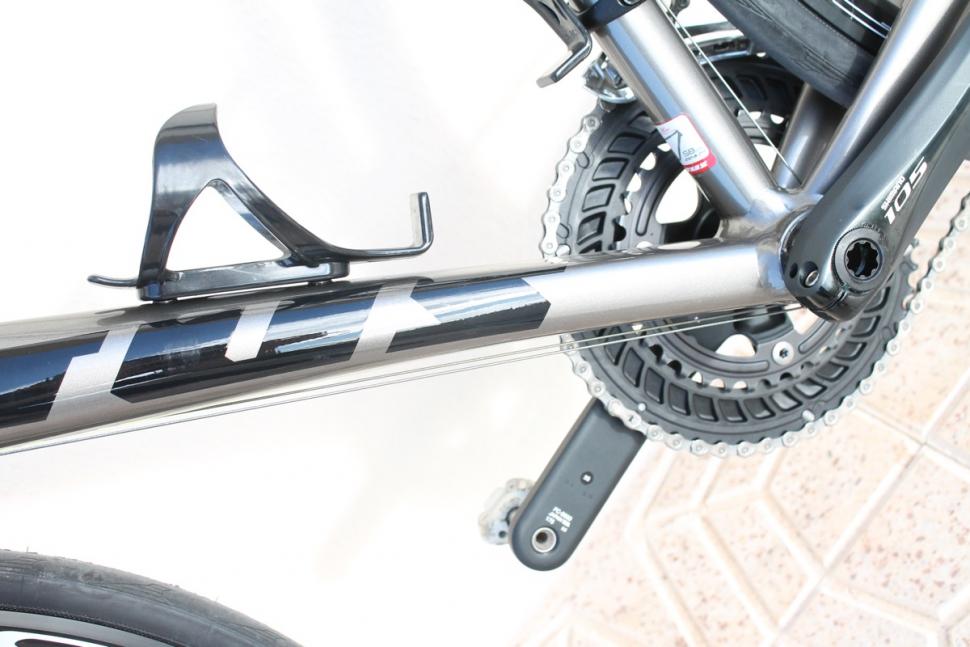 The frame we have here is a good looking design with a tapered head tube, a down tube that flattens out to span virtually the whole width of the bottom bracket shell, and fairly smooth welds. You can see them if you look but they’re hardly conspicuous. As with the other Vitus road bikes, the Zenium’s top tube slopes downwards to leave a lot of the slender 27.2mm seatpost extending out of the frame. Don’t underestimate the difference this can make to a bike’s comfort. The same goes for the slim seatstays.

Vitus describes the Zenium as having an ‘endurance’ geometry; in other words, your ride position isn’t as low and stretched as it is on a traditional race bike. On the other hand, you don’t get a sit-up-and-beg position either. It’s somewhere between those two extremes. 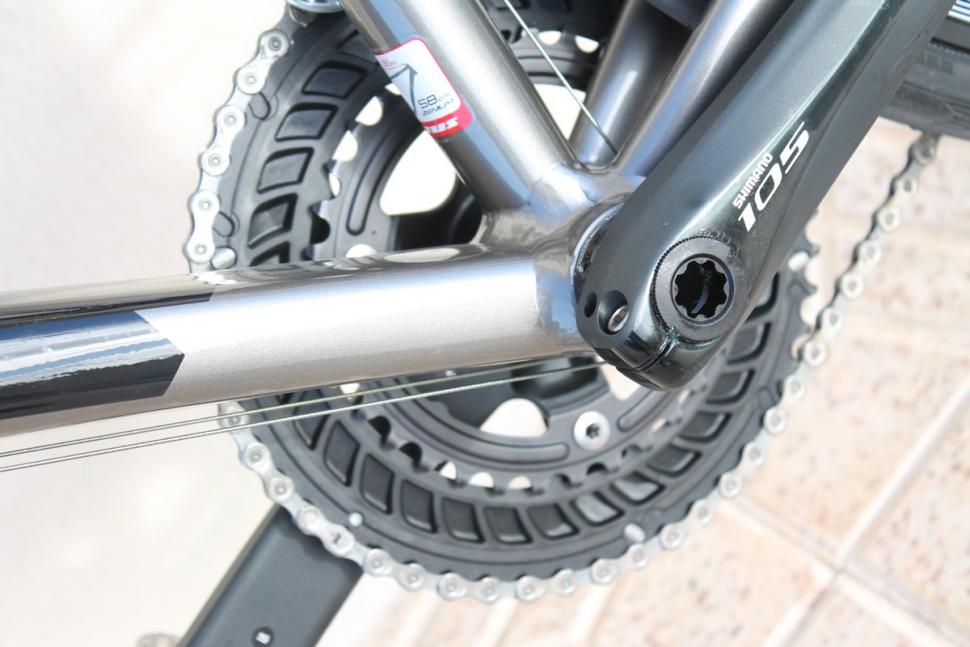 I had the 58cm Zenium VR Disc that’s built with a 578mm stack height (the vertical distance between the centre of the bottom bracket and the top of the head tube) and a reach (the horizontal distance between those two points) of 403mm (click here for more details on the geometry).

For comparison, a £1,200 Specialized Roubaix SL4 in a 58cm size has a considerably shorter reach – 392mm – and a significantly higher stack – 622mm. The head tube is 225mm compared to the Zenium’s 175mm. You’ll get a much more upright position on the Roubaix.

I got myself into a position I liked on the Zenium with a single 10mm headset spacer underneath the stem. I felt pretty efficient with my hands down on the drops of the aluminium compact handlebar. If you wanted a slightly more aggressive setup, you could obviously take out all the spacers; it just depends what you’re after. 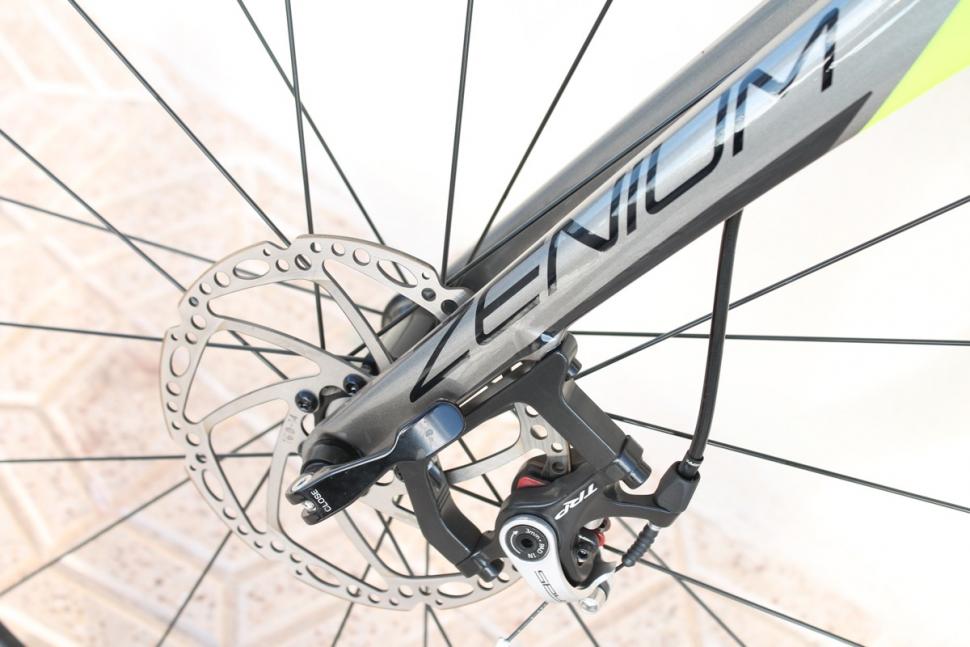 A T700 carbon-fibre fork slots in at the front, with a 100mm x 15mm thru axle design to hold the wheel in place against the braking forces… speaking of which, the Zenium VR Disc is fitted with TRP Spyres front and rear. That rear one is positioned on the outside of the seatstay rather than on the chainstay, which doesn't look quite as tidy to me, and it operates on a 140mm rotor whereas you get a 160mm rotor up front.

We rate the Spyres as the best mechanical (cable operated, as opposed to hydraulic) disc brakes out there, and Vitus uses them on all of its Zenium and Venon models. It’s a dual piston design with both pads moving an equal amount against the rotor. You don’t get as much power as with a hydraulic setup but it’s more impressive than any rim brake design we’ve ever used and it’s easy to stay the right side of skidding.

The descent from Coll de Rates is a real helter skelter of twists and turns and I really enjoyed it on the Zenium. This is a bike that feels well balanced and stable on the straights yet doesn’t have any trouble shimmying through the tight stuff. Personally, I don’t think disc brakes are a massive advantage in dry conditions, and that’s what we had, although they’d have been a whole lot more valuable in the wet. The rest of the groupset components are Shimano 105. These are very welcome on a £1,500 bike never mind one at this price.

Hitting the scales at 9.3kg, the 58cm Zenium VR Disc isn’t the lightest bike I’ve ever ridden by any stretch of the imagination, but it’s a very reasonable weight for the price. It wasn’t as easy to coax up the hills as the Vitesse Evo, but you wouldn’t expect it to be. It’s nimble enough, the 50/34-tooth compact chainset a good choice for a bike of this kind. The Fulcrum Racing Sport wheels complement the rest of the package. They don’t flex noticeably when you chuck the bike through the corners and they spin up to speed well enough. The Continental Grand Sport Race tyres provided all the grip I asked of them although, as I said, conditions were dry and not all that challenging. They’re 25mm wide and the Zenium has clearance for 28s if you want to take things up a notch.

My initial impression is that the Zenium VR Disc is an exceptionally good bike for the money. It’s sporty, reasonably light and agile, and the spec is way better than you’ve a right to expect. At £900, there’s very little to fault here.