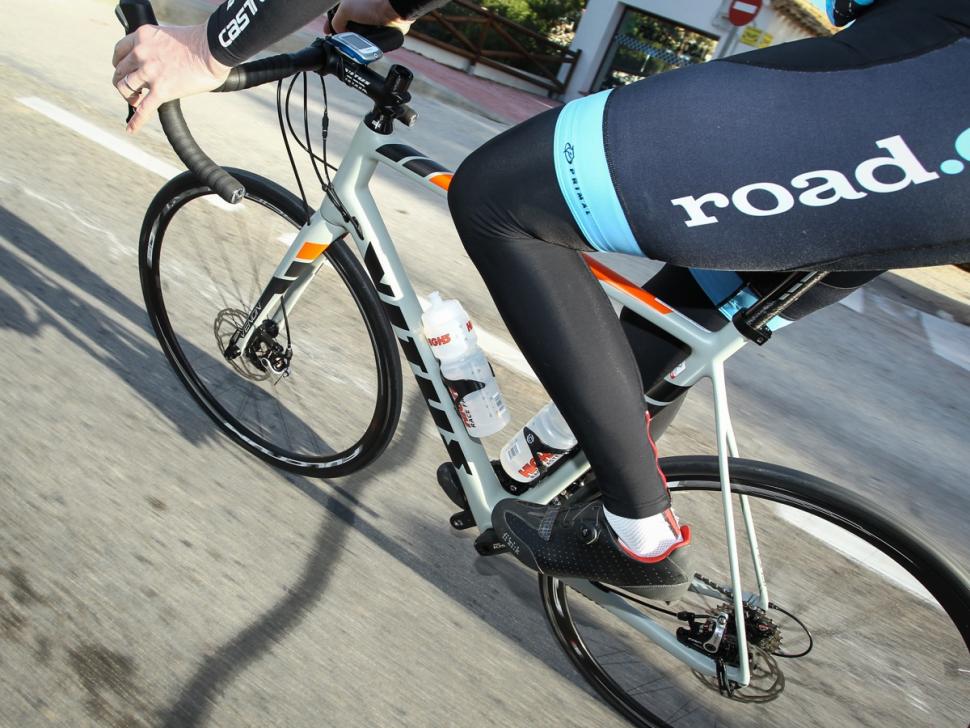 A carbon-fibre endurance bike with disc brakes and a Shimano 105 groupset for £1,200
by Mat Brett

The Vitus Venon is an all-new disc-equipped road bike that offers excellent value for money. You get a carbon-fibre frameset, a Shimano 105 groupset, and Fulcrum Racing Sport Disc wheels for £1,214.99, and our first impressions of the ride were very good. 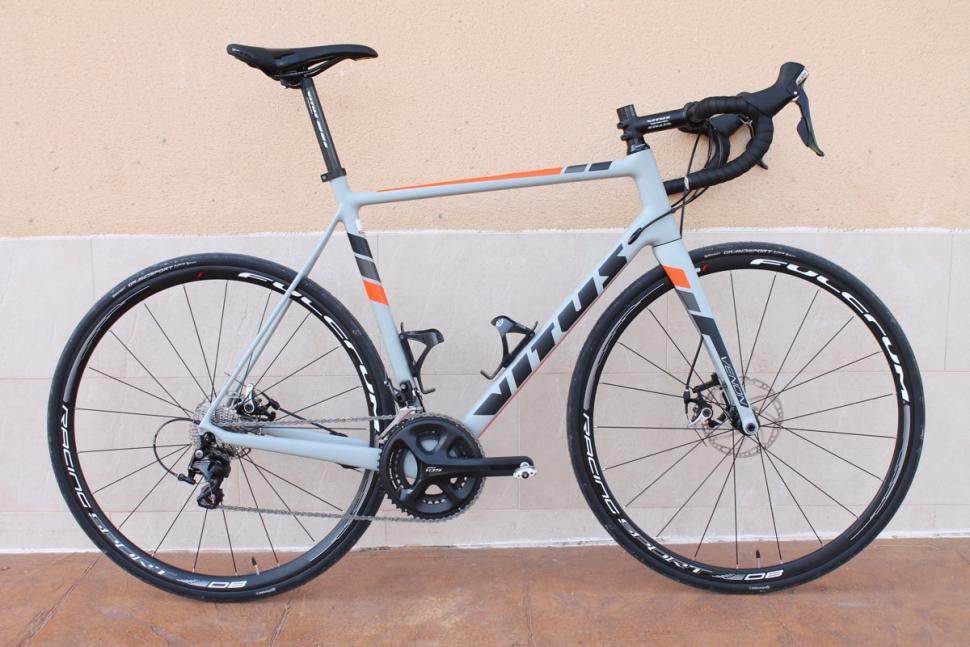 Vitus flew me out to Calpe, Spain, earlier in the week to try out several models from the 2016 range, and I got to ride the Venon for about 3 1/2 hours over mostly rolling roads. It’s a really comfortable bike for getting the miles in.

Whereas the Vitesse Evo is an out-and-out race machine, the Venon is more endurance orientated. The Vitesse Evo is all about light weight and stiffness while the Venon, also made from T700 carbon-fibre, prioritises ride quality above all else. 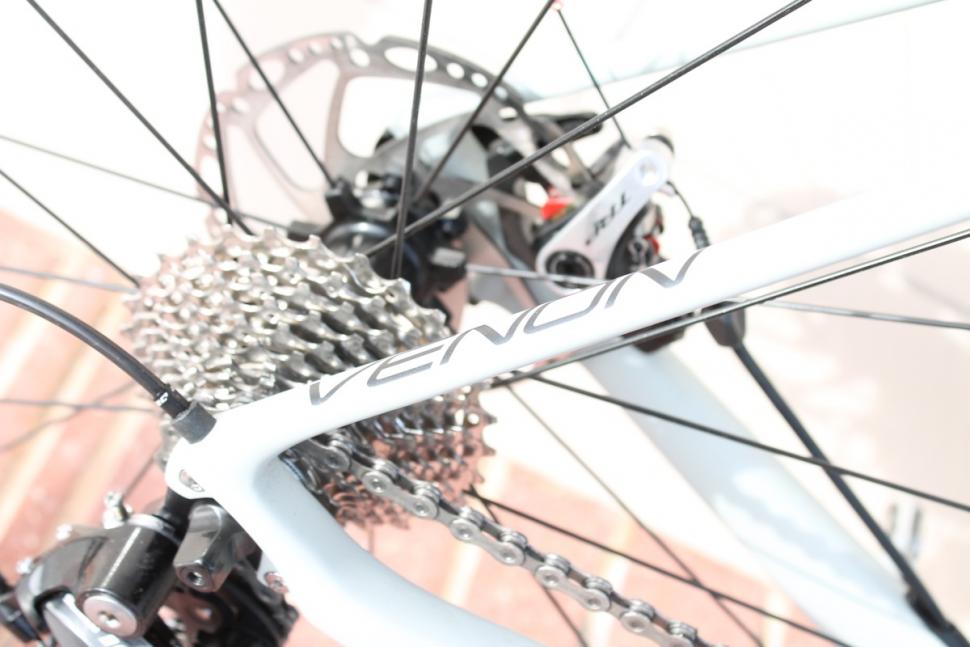 You’ve only got to take a look at the bike to see what Vitus is aiming at here. The wishbone chainstays have a slender, flattened profile that’s designed to encourage a bit of spring at the back end, and the seatpost is a slim 27.2mm in diameter. That makes a big difference to the amount of vibration damping a bike can offer, especially if, like the Venon, it has a sloping geometry that leaves a lot of seatpost exposed. The Continental Grand Sport Race are in a 25mm width although the Venon will easily take 28s if you want a larger cushion of air between you and the road. 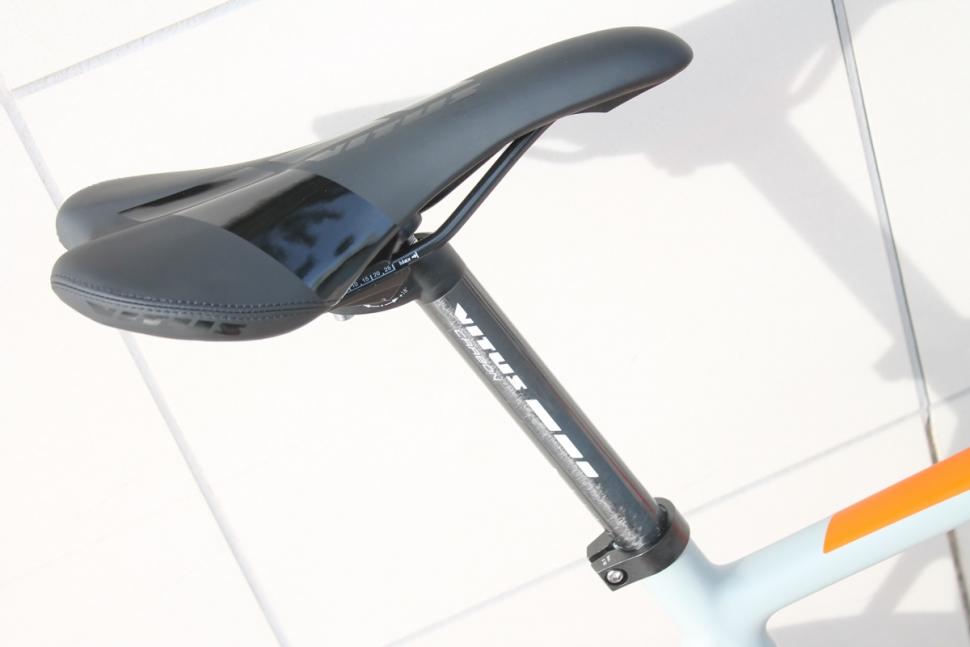 As it is, the Venon takes the sting off square-edged potholes effectively, and road buzz really isn’t an issue. Like any other saddle, the Vitus in-house model fitted here is going to appeal to some riders and not to others. It’s a bit too squishy for my taste, to be honest, but it’s a pretty inoffensive shape, reminding me a lot of a Fizik Aliante. 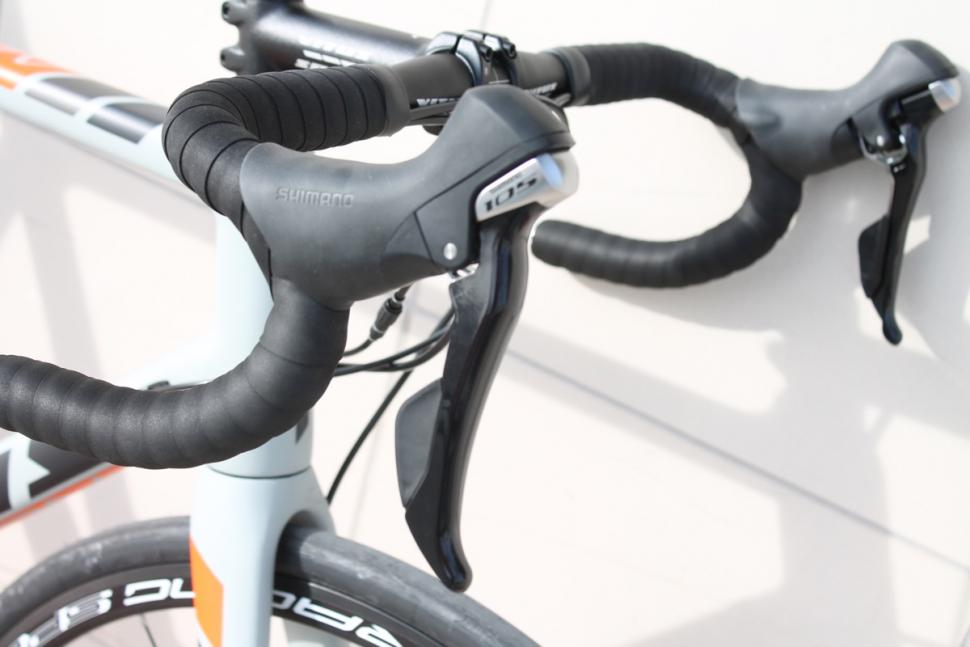 The only other component that didn’t particularly do it for me on the comfort front was the Vitus handlebar. I’ve nothing at all against a 6061 aluminium bar and I like a compact design, I just prefer a larger diameter to fill your palms and spread the pressure. Yes, I’m picky git! Those are just a couple of personal niggles, though. The main thing is that the frame itself is a smooth character. 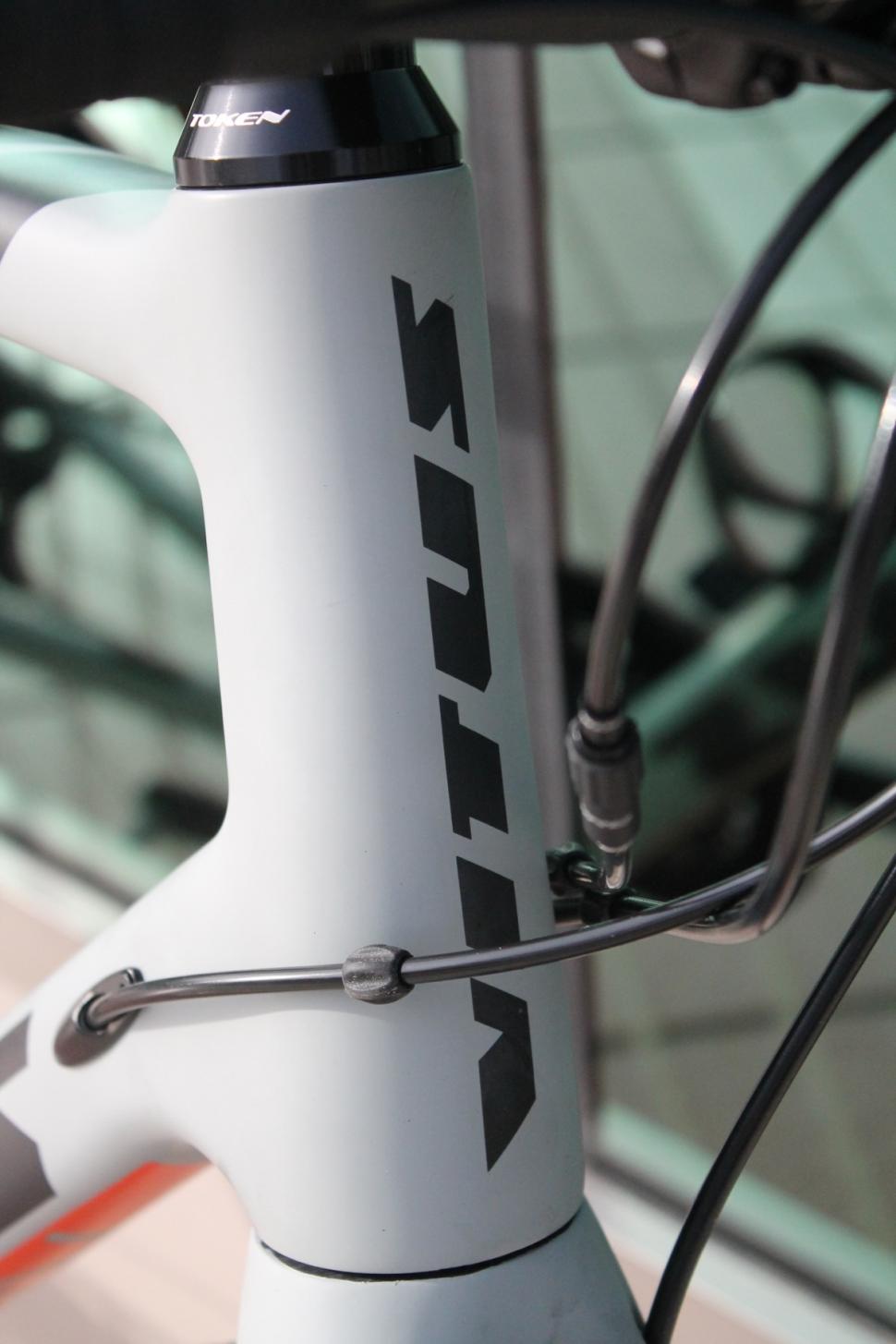 The Venon is built to an endurance geometry. Compared to the Vitesse Evo I mentioned, the ride position is shorter and more upright. To put some figures on it, I had the 58cm frame with a 58cm seat tube, a 575mm top tube, and a 175mm head tube. The reach (the horizontal distance from the centre of the bottom bracket to the top of the head tube) is 398mm – 5mm shorter than that of the Vitesse Evo – and the stack (the vertical distance between those two points) is 579mm – 3mm shorter. Those differences aren’t massive, but I did feel that I was sitting a little higher than usual on the Venon. It’s still very much a road bike position, just a little more relaxed than that of a full-on race bike. 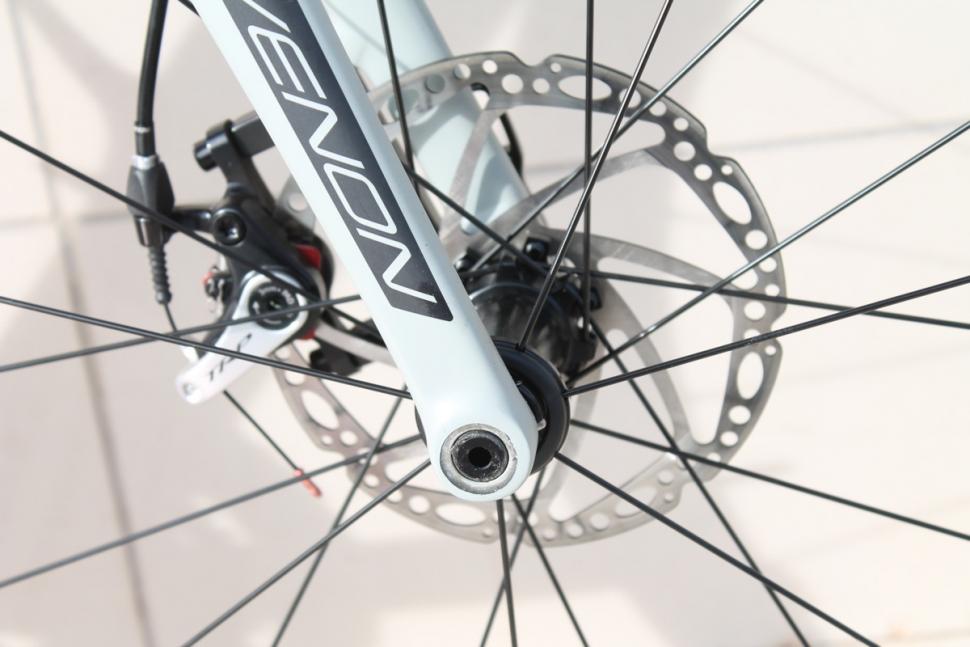 The other key thing to discuss is that the Venon comes equipped with disc brakes. Now, you’ve probably already got views on disc brakes on road bikes so I won’t go into detail on the pros and cons here. Personally, I think they make a lot of sense on a bike like this. The Venon isn’t a race bike but, that aside, it’s likely to get used for all sorts of stuff: weekend rides, sportives, training, perhaps longer distance commutes, although there are no rack or mudguard eyelets. It’s likely to get ridden in all weathers and, as I said, you can fit 28mm tyres to provide more grip when braking hard. 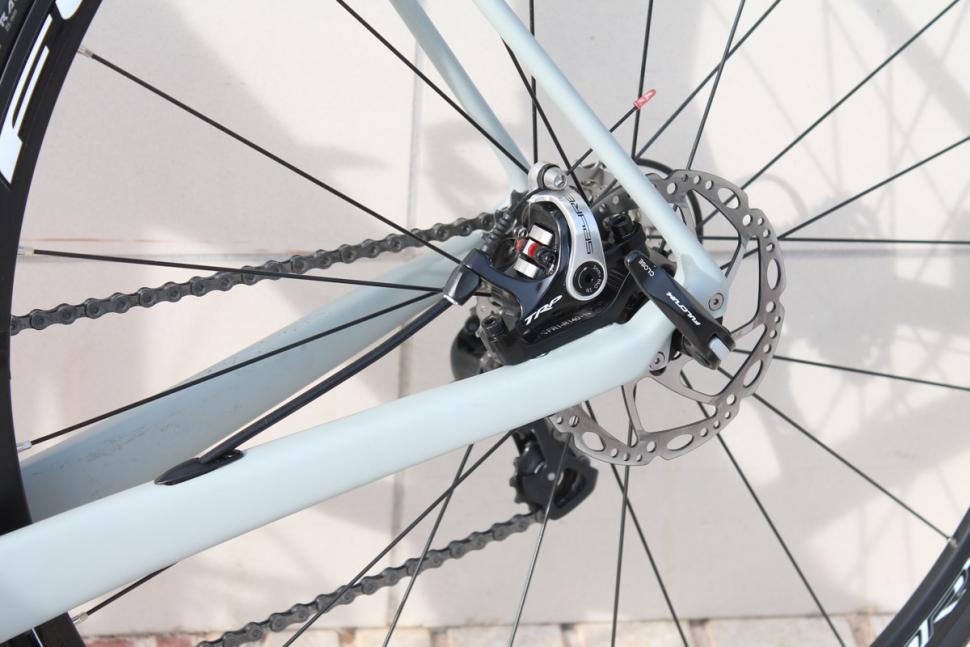 The disc brakes in question are TRP Spyres. There are three versions of the Venon available – more on that in a mo – and they all come with these brakes. We reckon Spyres are the best cable-operated (as opposed to hydraulic) road bike disc brakes out there largely thanks to the fact that both pads move towards the rotor (rather than just one) and their very easy adjustment. Our ride took in some sinuous descents and these brakes provided all the predictable power you could want.

Of course, one of the biggest benefits of disc brakes is that they perform almost as well in the wet as they do in the dry, although there wasn’t a drop of rain while I was in Spain so I can’t comment on that. Gutted!

Vitus uses Shimano’s (relatively) new flat mount disc brake standard which means that the Spyres need to be fitted via an adaptor. It’s not the neatest looking solution ever – it’s a little scaffold-eque, to be frank – but with flat mount now taking over, it future-proofs the bike. 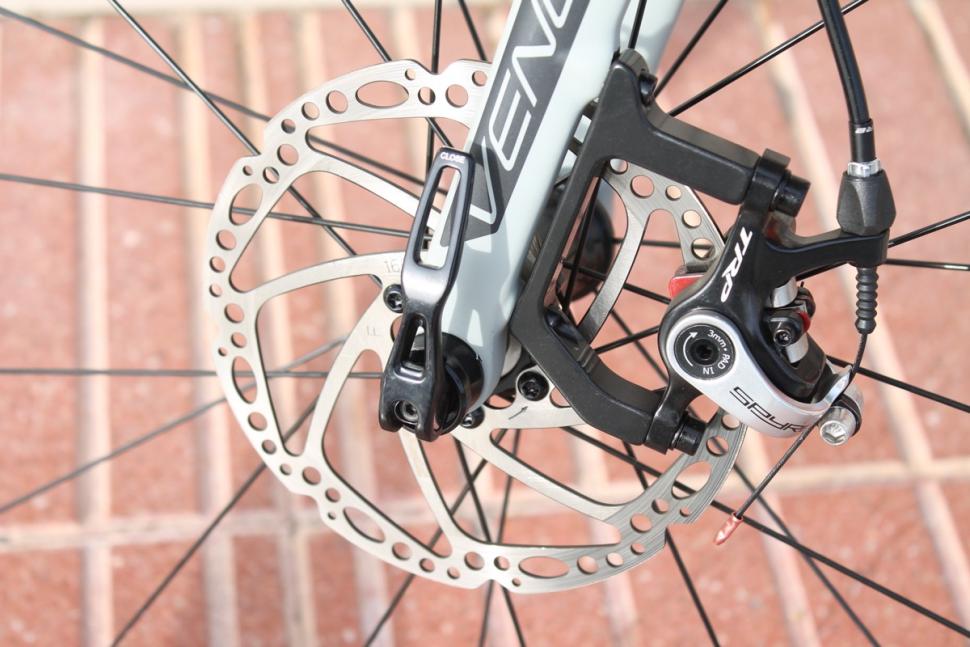 The rear dropout is a traditional open design (135mm x 9mm quick release) but you can switch it to bolt-thru if you buy an aftermarket kit. The fork is 100mm x 15mm thru axle, the idea, of course, being to keep your wheel firmly in place while braking hard. I certainly didn’t have any issues there on my test ride. 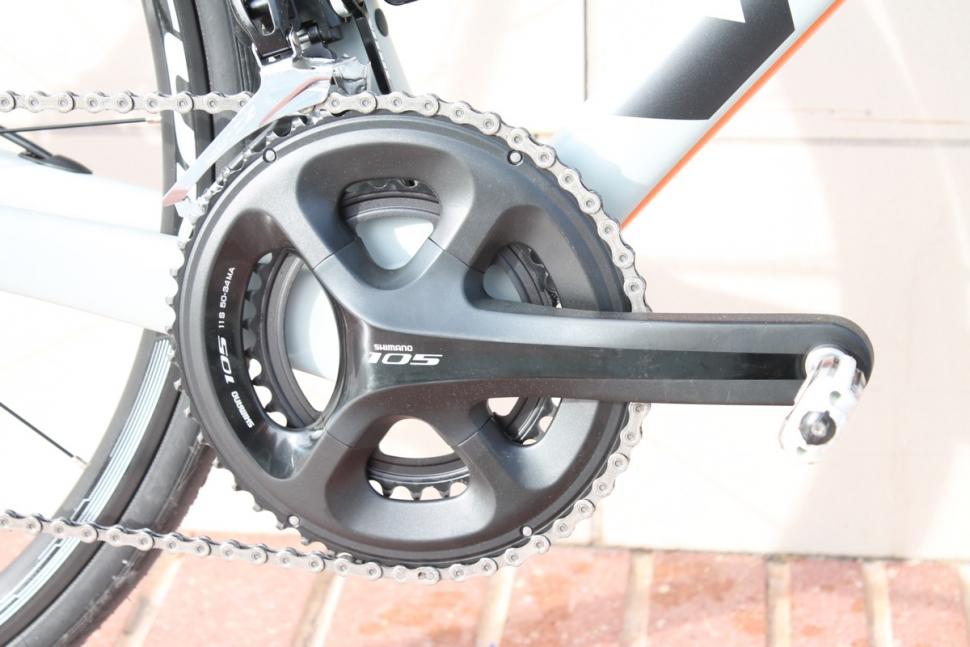 Brakes aside, the groupset components are from Shimano’s mid-level 105 groupset. Long-suffering readers will know how highly we regard 105 around these parts. It offers an excellent performance for the money, especially on a £1,200 bike.

Vitus offers the Venon Disc in a women’s specific version at the same price (although the official RRP is £1,349.99, it’s £1,214.99 on Chain Reaction). That bike, the Venon Disc L, uses the same frameset but it has a different handlebar, stem and saddle. It comes in a different (non-girly) colour scheme too. 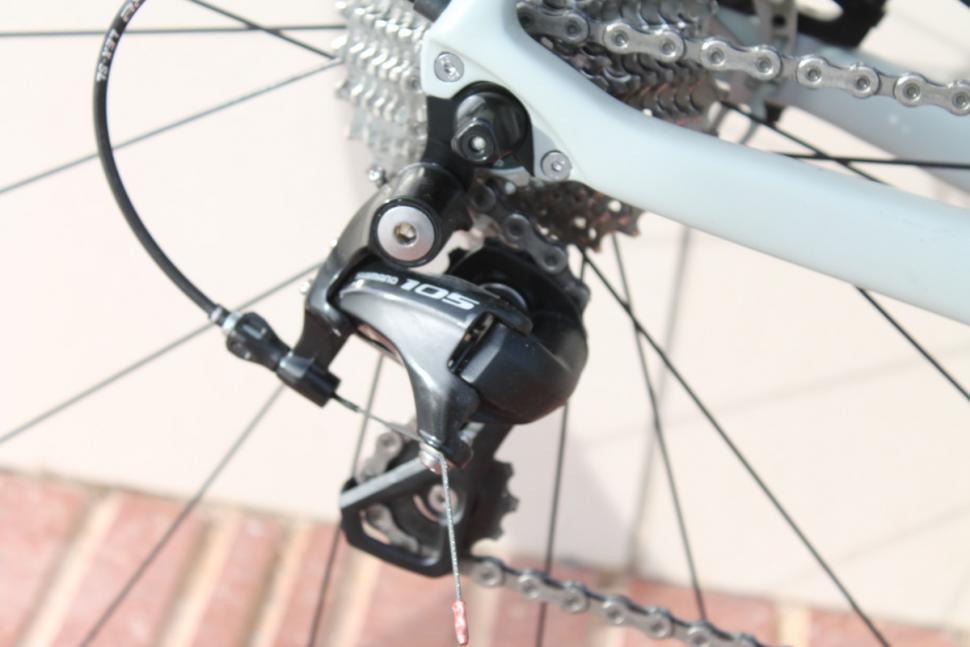 The other option in the range is the Venon VR Disc. It’s the same bike but with Shimano Ultegra rather than 105 components and Fulcrum Racing 5 wheels instead of Fulcrum Racing Sports. It’s officially priced £1,799.99 although you can buy it from Chain Reaction for £1,699.99. The 58cm Venon Disc that I rode weighed in at 8.8kg (19.4lb) on our scales. That’s 1.1kg more than the Vitesse Evo. Did I notice the difference? Yeah, certainly. The Venon is a little less eager to jump into life if someone puts in a dig at the front of the group, and it’s less floaty when the road heads skyward. On the other hand, it’s 500 quid cheaper and it’s not designed to be a race bike. 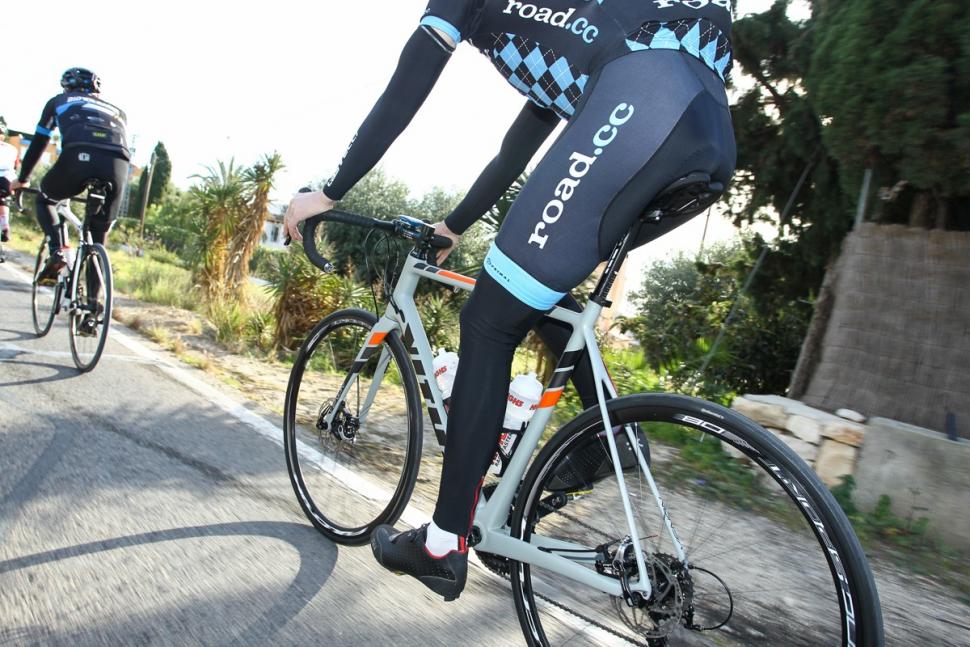 All in all, the Venon Disc offers you a whole lot. If you’re after a comfortable, endurance-driven road bike with a ton of value for money, this is one for your short list.

1
Warning that cycling could be banned if people don’t ride responsibly this weekend
2
Daily exercise rules: current cycling dos and don'ts
3
“Best to avoid cycling in case you fall off” says director of motoring group
4
How much distance should you leave to the cyclist ahead in a time of pandemic?
5
“Absolutely amazing” say campaigners as Government quietly announces it will prioritise a shift away from cars
6
Cyclists banned from Richmond Park due to “congestion”
7
Cyclist deliberately doored by hit-and-run Audi TT driver
8
Not-so-Near Miss of the Day 391:Cyclist knocked off bike - but police unable to idenify hit-and-run driver