World Champion Peter Sagan is well used to custom painted race bikes, and for 2016 Specialized has prepared this custom painted S-Works Venge Vias for the Tinkoff rider to kick off his season in style. Well, he'll certainly stand out. The new bike continues the theme set by the Specialized Tarmac that was prepared for the Slovak rider following his stunning victory in the UCI Road Race World Championships in Richmond last year. It features the rainbow colours in a sort of camo style across various sections of the frame, laid over the top of a glittery base coat that reflects Sagan’s star status within cycling. If you look closely at the S-Works logo on the down tube you’ll spot all the names of the previous winners of the world champs. 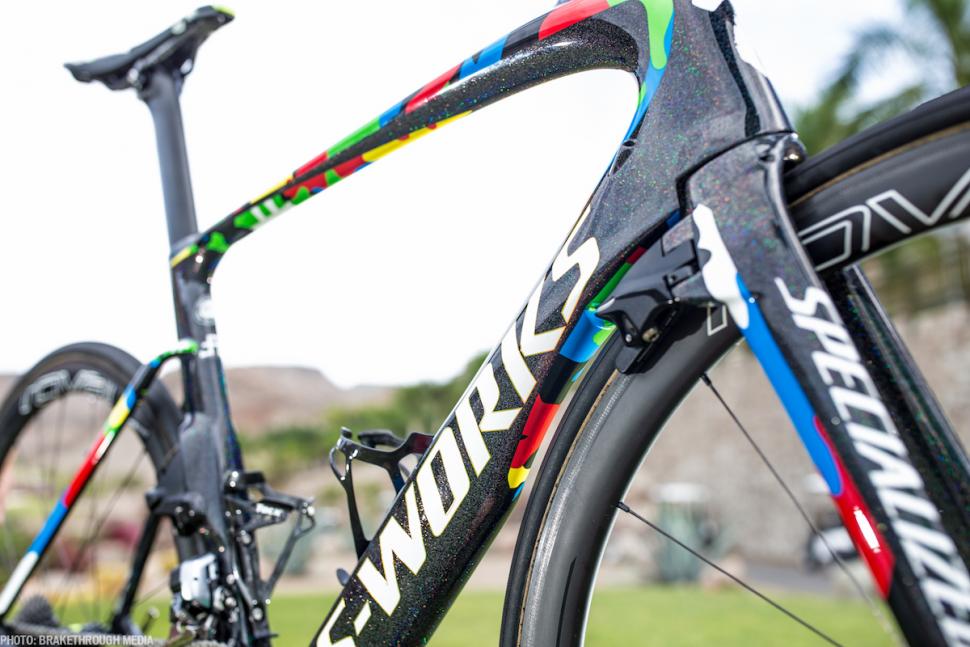 Tinkoff continues to be supplied by Shimano, so it’s a full Dura-Ace Di2 groupset with an SRM Power meter at the cranks. Specialized supplies the Roval CLX40 wheels with Turbo tubular tyres. CeramicSpeed bearings are used at the headset and bottom bracket. 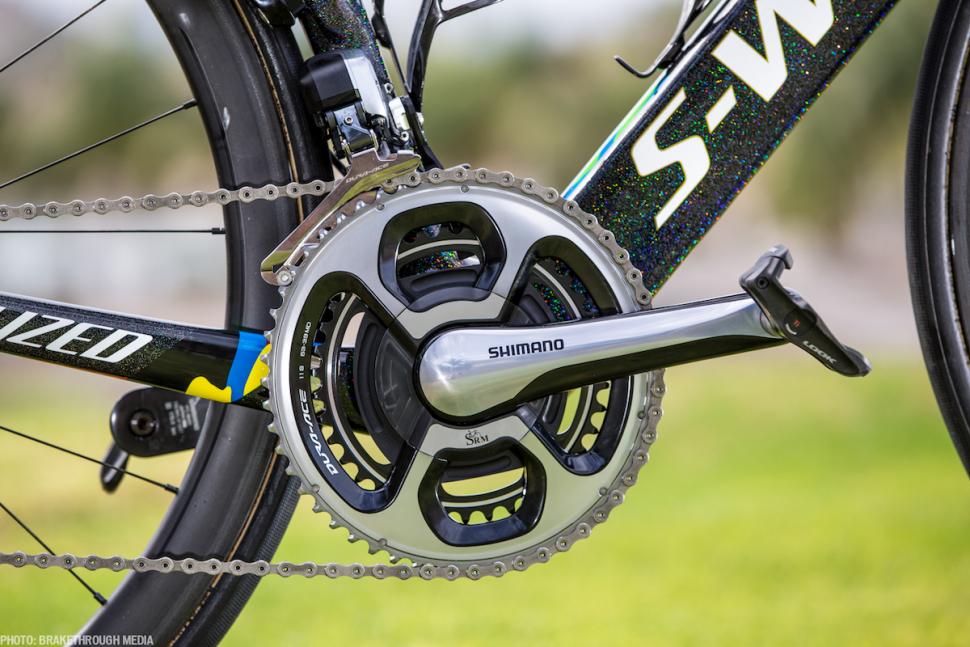 To complete the bike, Look and Prologo have each produced custom pedals and saddle respectively. FSA provides a K-Force seatpost and Prologo the Scratch2 saddle. The bike is fitted with Specialized’s own unique handlebar and stem, which was developed along with the Venge Vias frame. 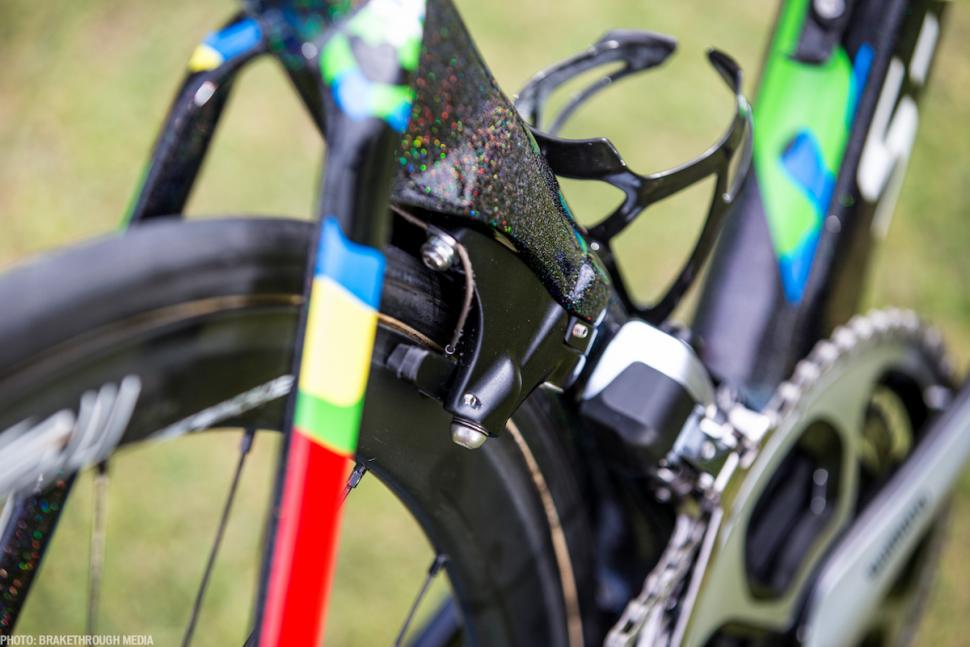 The Venge Vias was launched at the 2015 Tour de France, where both Mark Cavendish and Peter Sagan started the race aboard the new bike (but didn’t finish the race on it). The Venge Vias is the long-awaited update to the original Venge, launched back in 2011. It’s the most dramatic makeover we’ve seen for a new road bike, with integrated brakes placed in unusual locations and the swept up aero handlebar and stem integrated into the head tube. 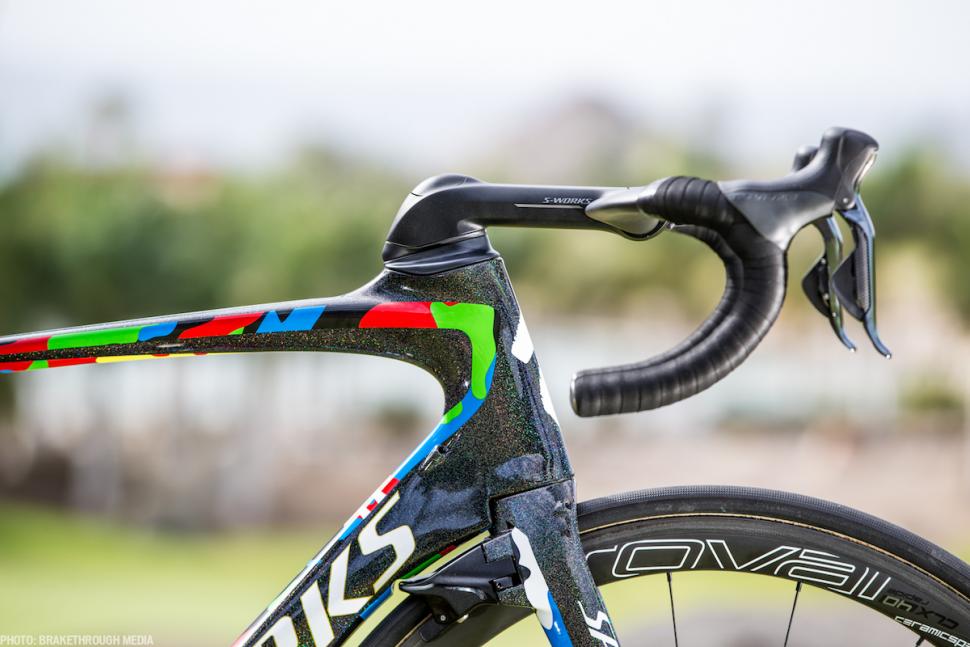 What’s going on with the front end, you’re probably wondering? To achieve the best aerodynamics, Specialized has developed the stem with a -17 degree rise and then offers two handlebars for the rider to get the desired fit, with a 25mm rise bar or a flat option. Sagan has opted for the most aggressive setup. What Specialized is attempting to do is force the rider into an aggressive and low position, to minimise drag caused by the rider. Perhaps the most impressive aspect of the new bike is the way all the cables are internally routed. The cables are concealed inside the handlebar, pass directly into the stem and then from there into the frame. Few other bikes manage to keep the cables this well hidden.

What are all those changes worth? According to Specialized, the Venge Vias is 120 seconds faster over 40km than a Tarmac SL4.