The Ravemen TR30M rear light has practical modes for most situations. In recent years, optical technology means lower lumens don't necessarily mean low power, and the TR30 is no exception. Run-times are on the moderate side, but it charges swiftly, which is convenient for office-bound commuting.

The lens and body are a see-through orange monocoque, which incorporates the hook for attaching to the seatpost clamp or clothing/luggage. Internally, it's engineered to project 360 degrees, sharpening output at key points. It's fuelled by a 200mAh, 3.7V lithium-polymer battery. Lithium polymer cells have the advantage that they can be made to any shape and are lightweight yet resistant to impact trauma. That would be of little use if the other components aren't to a similar spec, but they are, and the light is reckoned to withstand drops of up to a metre.

The charge port is sensibly positioned up top, minimising if not eliminating the likelihood of it getting exposed to wet, gritty stuff. 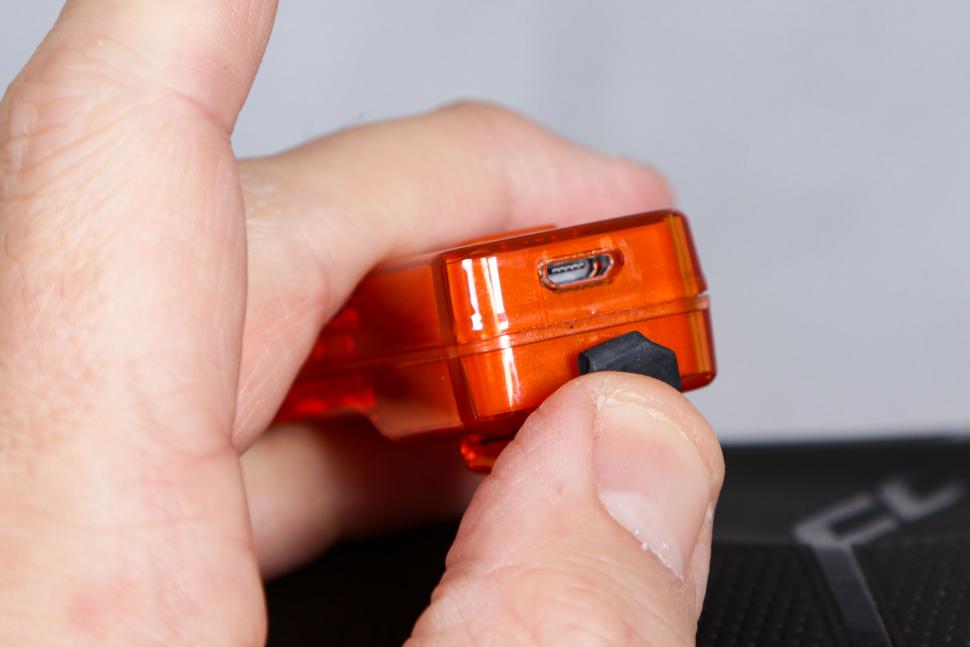 There's an auto kick down, which is welcome, but this feature does not act as a 'reserve tank' so doesn't buy additional time, over those run times cited.

The articulated mount ensures the light can be adjusted for optimal positioning, so it doesn't project skyward or at your mudguard/tyre. It comes with a silicone shim and is compatible with round and aero seatposts, simply attaching with o-rings. While functional, it's relatively crude compared with those you get with Ravemen's CL05 and CL06 rear lights (full reviews to come), which are also articulated but have an integrated wraparound ladder-type strap. The TR30's o-ring strap doesn't feel the most durable, and I have reservations regarding the adhesive shim's durability when it weathers. To be fair, nothing has gone wrong during the test period, but what does stand out to me is that, while the main unit is very well executed, the mount, though functional, feels as if it's been built to a price. As an aside, the TR30 light body will also fit on the CL series brackets.

The monocoque clip on the light fits into the mount securely, and also works well and very securely on a jersey pocket or slotted onto bikepacking luggage. 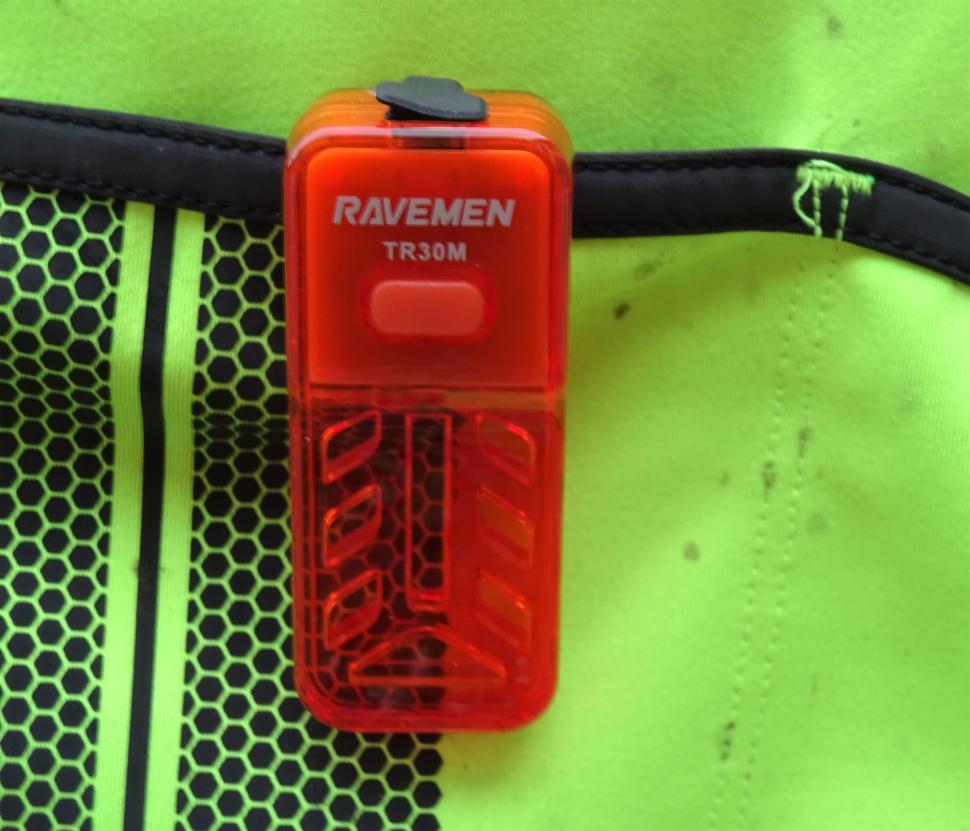 The switch is a rubberised affair, with an integrated charge indicator positioned just below the Ravemen logo. Though rubbery it's still positive, so doesn't feel vague in full finger winter-weight gloves. I've had no incidents of unwanted engagement when it's been in a jersey pocket.

Press and hold for two seconds to turn the light on/off; single presses change modes. A memory function means it turns back on in the last mode used.

The TR30 charges from a micro-USB cable, which is reliable enough but a little shorter than I'd like. Charge time is cited as a convenient 90 minutes and it was bang on in the real world from the mains. Tack on another 20 minutes from a laptop/similar third party technology.

Run-times are very faithful to those cited too. I've consistently cruised past the 2 hour mark using the 30-lumen flashing, 90 minutes from the 20-lumen steady, and 3 hours 8 minutes for low steady. Rapid flash came within 4 minutes of the 15 hours claimed, pulsing within 8 minutes of the 8 hours claimed. I've had no unwanted power-downs to date. It's pretty much what I'd expect these days, given the advances in battery technology, and it's worth noting that I had been riding in temperatures as low as -5°C.

The TR30 has proved brighter than the lumens might suggest. The 30-lumen flashing is more than up to the job of unlit backroads. It produces a broad arc of light and the tempo is quick enough to nail attention. The translucent body certainly helps in terms of peripheral prowess, and when used as my solo rear light I felt reasonably secure.

Anecdotally, approaching traffic seemed to pick me out at 180 metres, when attached to seatpack or jersey pocket, which seemed to dip to 120-140 metres when seatpost or seatstay mounted. 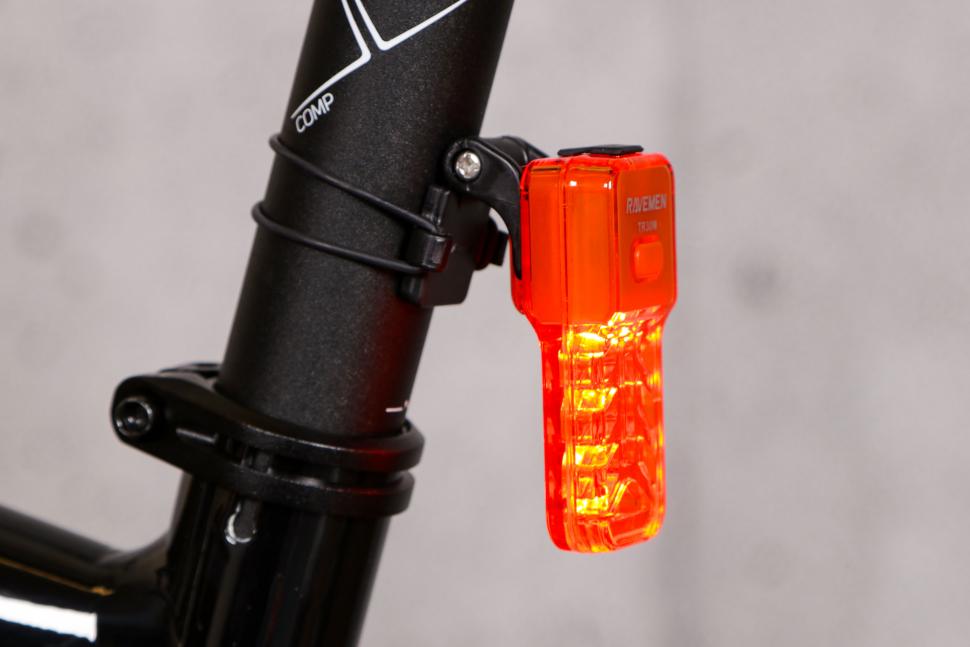 It's probably overkill for urban work, if unlikely to test tempers or fry retinas. Friends reckoned they could spot me at 100-120 metres.

While its TR50 sibling's highest flashing mode will pass as a daylight runner, the TR30's doesn't. In fairness, its presence is reasonable on overcast days, but not bright, sunny ones.

The 20-lumen steady is another mode that covers most bases, albeit lacking the outright presence of a flashing of comparable power. There's enough bite for the backroads without being offensive at close quarters. Given competing illumination, friends reckon they could pick the light out at 70 metres or so; open roads 80-100 metres, depending on whether skies are cloudy or clear.

Group rides aside, the 7-lumen low steady wouldn't be my first choice along the lanes but could save your bacon if reserves were tumbling and you didn't want the light to take its kick down default. It was much better than I was expecting in suburban and semi-rural settings, too.

I also like the 8-lumen pulse flash. It's another mode that is brighter than numbers might imply and quite eye-catching along the lanes, and through more trafficked areas around dusk or gloomy afternoons. Anecdotally, it seemed to grab people's attentions at 60-70 metres, and by my reckoning the pulsing tempo is just slow enough not to grate at closer quarters.

It's a good default in the performance to economy stakes but a better choice for open roads. When used as my only rear light, the pulse pace was just a fraction too slow for some situations: joining the flow of traffic or exiting roundabouts, the pattern's momentary pauses left me feeling uncomfortably stealth.

The lowest flash is a viable option for limping home or tackling shared use paths, but other than that (or as a secondary light) I'd be going for a brighter mode.

I've subjected the light to mucky lanes (without mudguards), extended douses with the hosepipe, and freezing temperatures. The TR30 hasn't missed a beat, despite the charge port's cover not being the best fit on our model.

Competition is fierce at this price point, and though I wouldn't say the Ravemen is bad value, there are several offering higher outputs and longer run-times for the same money.

Fabric's Lumasense V2 also packs a maximum of 30 lumens but boasts a braking function too, for £29.99. (We tested a previous iteration back in 2016.)

Magicshine's Seemee 100 is very powerful, more sophisticated and a few quid cheaper, though some modes can be a bit thirsty and the braking function merits refinement.

The TR30 is a good choice for commuting and shorter training rides. It's particularly good for built-up areas but also gives out enough light for backroad blasts. The 360-degree visibility is reassuring, too, but I'd rather it came with the bracket you get with its CL siblings.

It's a capable light that's brighter than numbers alone would suggest.

Quick release design, compatible with round and aero seatposts

Light is well made, bike mount not quite up to the same standard, but functional.

The articulated function ensures the light can be adjusted for optimal positioning, but though functional the mount is a more crude design than those used for Ravemen's CL05 and CL06 rear lights.

It has resisted being blasted with wet silty stuff along the backroads and has passed my garden hose test with flying colours.

Run-times don't rival some models, but it's reliable and charges swiftly.

Brighter than numbers and diodes might imply, thanks to decent optics and design. Run-times are accurate and it charges quickly.

Light solidly made, bike mount not quite up to the same standard, though it's functional.

Competition is fierce at this price point and there are several offering higher outputs and run-times. For the same price, Fabric's Lumasense V2 has a maximum flash of 30 lumens but also a 100-lumen braking function. Magicshine's Seemee 100 is also very powerful, more sophisticated and a few quid cheaper, though some modes can be a bit thirsty, and the braking function merits refinement.

The clever optics and intuitive design mean the TR30 is bright enough for country lanes yet provides plenty of presence in the lower modes for town and group riding. Run-times favour commuting or middle distance training rather than endurance rides, but the TR30 charges quickly, which balances things out.

Not a major gripe, but the mount doesn't feel as high standard as the light unit itself.

It's a decent light overall, tempered by a good but not great mount.