The Ravemen LR800P is a high performing light offering up to 800 lumens of output and the ability to light up unlit lanes. It lacks the anti-glare-specific beam of its more expensive siblings, but doesn't dazzle. The battery indicator could be better, and the mount isn't technically aero bar compatible, but other than that it's excellent.

If you're looking for an inexpensive front light that could be your 'one light to rule them all', then you could do a lot worse than Ravemen's LR800P. Thankfully, the light is very bright but doesn't dazzle (hurrah!).

The LR800P is built like a tank thanks to its aluminium shell with 'Mil Type III Hard Coat Anodizing'. It's also shock resistant to one metre, and the high IPX6 rating means it offers protection against direct high-pressure jets, so you should be fine to keep the light in place when you need to wash your bike. It's a stubby thing, and at 120g it's pretty light given its high 800 lumens output. 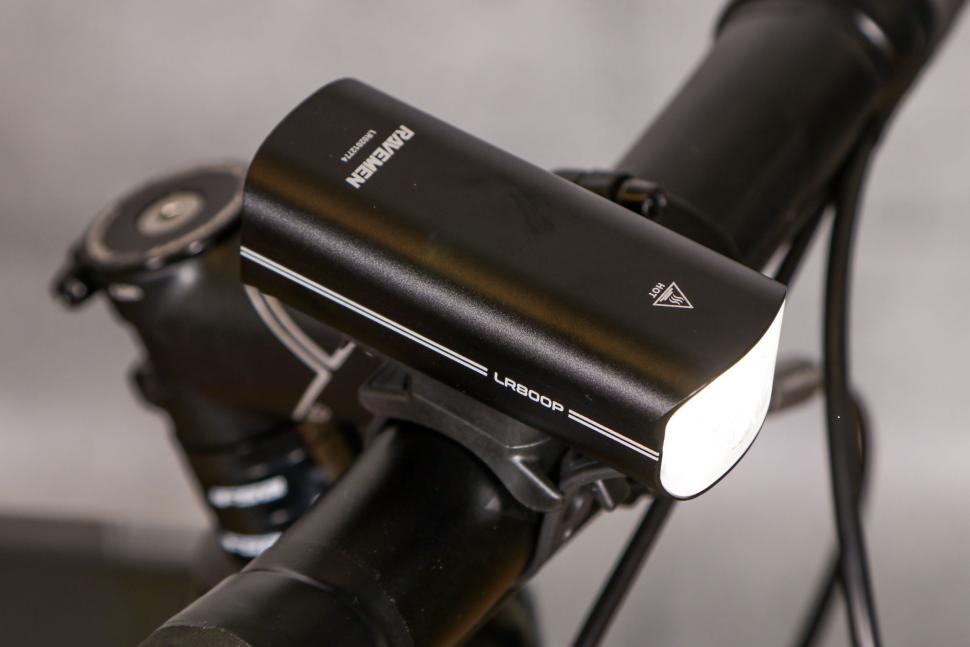 The 2600mAh/3.7V rechargeable lithium-ion battery offers decent capacity and, bonus point: if it runs dry the light can even be powered by an external battery in a pinch.

The mount is a simple plastic affair with a silicone ratchet band to secure it in place on your bar. There's a quick release lever, so the light can be removed from the bike quickly and easily. The mount fits round handlebars between 22.2mm to 35mm, which should work with most types of bike. Although Ravemen doesn't explicitly say it's aero-friendly, other road.cc reviewers have found that the Ravemen mount works reasonably well with some aero bars. One of my favourite aspects of the LR800P is that it's refreshingly simple to use. There are only four modes to choose from: high (800 lumens), medium (450 lumens), low (200 lumens) and rapid flashing (300 lumens). In a life of being constantly time poor (but sadly not cash rich), the less I have to think about which setting to use, the better.

Operating the light is a piece of cake too. Just hold down on the side-mounted button briefly to turn it on, press it once each time you want to switch between modes, and hold it down again briefly to turn it off. A memory function means it'll remember the last-used setting.

My only gripes with the unit itself are that the location of the button and its relatively small size mean it can be slightly tricky to operate wearing thick gloves while on the move.

That's less of an issue, though, thanks to the optionally available Ravemen Wired Remote (ARB01) which costs just £4.99, and allows you to control the light without having to move your hands from the bar. A big button makes it easier to use, too. It's definitely worth having.

If that really bugs you, there's an optional Wired Remote (ARB01), which costs just £4.99 and allows you to control the light without having to move your hands from the bar. A big button makes it easier to use, too. It's definitely worth having.

Another minor gripe about the user interface is the batter indicator, which could be more accurate – when the power button lights up green it simply means the battery has over 35% power left. That's a pretty vague indicator in my book. Red means 10-35%, while a flashing red means there's less than 10% left.

The LR800P is a powerful light at its highest setting of 800 lumens, with a broad spread of light that offers a huge amount of visibility in the near distance, picking out loads of detail. It also projects far enough ahead to be able to move at a decent pace along unlit lanes or paths without worrying about something unseen suddenly appearing. Ravemen states a beam distance of 126 metres, which is about what I experienced during pitch-black rides.

It's worth noting that although Ravemen, ahem, raves about its anti-glare technology, this is only found in the more expensive models – the PR and CR series. The LR series doesn't boast any such anti-glare tech; rather, Ravemen simply states the light offers an 'even-distributed flood beam'.

Certainly, during testing on a pitch-black path, I found that with the light height set correctly on the bar there was only minimal glare from 50-150 metres away. You can further reduce the glare with the in-built pivot on the mount, which enables you to adjust the light left or right to point it away from oncoming traffic.

The 800 lumens mode is too bright for using around other road users, but dropping it down a notch to the 450 lumens setting gives you a more usable mode that you don't need to adjust all the time. The LR800P definitely fared better than cheaper lights like ETC's Capella, which we found to really dazzle.

Ravemen says the LR800P is good for about 1hr 12mins use, but in testing it managed to ace this at 1hr 39mins. Admittedly, this was done indoors at a stable temperature, so I would expect this to be a bit lower in the dead of winter.

The lowest 200-lumen mode is ideal for urban riding where there's plenty of ambient lighting. You get about 4hrs 30mins use, which should be enough to get you to the office and back for a couple of days without charging. The curved lens of the LR800P also means there's side-visibility built in, which I appreciate in busy parts of town where there's a lot of side traffic to worry about.

The LR800P isn't just suited to nighttime riding, it works really well in the day too. The light is visible from about 200 metres away, even when putting out the paltry 200 lumens on a bright, sunny day.

The flashing mode isn't quite as in-your-face as other lights we've tested, not because it's not bright enough (300 lumens is plenty), but because in this instance it doesn't exhibit the stark on/off behaviour of other flashing lights. Instead, it's always steady, with a boost in lumens to give it the flashing effect. Personally, I prefer this because I tend to feel safer knowing the light is always on between blinks.

Ravemen quotes a run-time of about 11hrs 30mins in this mode, which turned out to be more like 12 hours plus in optimum conditions, so there's plenty of scope for even long rides.

The LR800P retails for £49.99, but I've seen it for much less at various retailers – as little as £35.99 at one outlet. Even without the discount, though, this is a reasonably priced light given its abilities – the high-quality, powerful output is very appealing. You can buy cheaper – ETC's Capella is an 800-lumen light for £40, but Mike found it to be too inefficient and dazzling to be any good during testing.

Lezyne's Micro Drive Pro 800XL seemed to fare better when Emma tested it a couple of years back, though it's much more expensive than the LR800P, doesn't boast any kind of road-friendly lighting, and it's more complicated to use.

Liam quite liked the Magicshine Allty 800, which is currently around £43, but it's not readily available in the UK, at least not from official dealers.

So, I think it's fair to say that Ravemen's 800 lumen option is a cut above the competition in all aspects. It's not only superior in terms of its lighting technology, it's got great run-times, it's easy to use, and it's also built to withstand any weather – even the occasional knock. It does make you wonder if you would ever need anything more substantial for using on the road (or even off it).

A well-priced light that offers high output in a small package – ideal for unlit lanes or for general commuting.

Materials: The main body is made by aluminum with Mil Type III Hard Coat Anodizing; the rear part and the handlebar mount are made by durable plastic

Design and specifications are subject to change without notice.

Only a few modes to choose from, for ease of use, and simple to switch between each one with a button press. Side-mounted button is slightly trickier than some to operate with thick gloves on, on the move.

Simple silicone band offers a solid mount, and the light can be adjusted left to right to help reduce beam dazzle. Doesn't technically work with aero bars, but can fit some narrower ones, according to the road.cc office.

IPX6 rated, so short of being submerged for a length of time, it's impervious to poor weather – even high pressure water while you're cleaning your bike is fine.

Ravemen states a run-time of 1hr 12mins on its highest output, but I easily managed 1hr 39mins. That said, I tested it in a warm indoor setting, so this would likely be less in really cold weather.

Powerful on its highest setting, capable of lighting up unlit lanes or paths. Beam pattern is a good spread, and a reasonable distance too (Ravemen actually states 126 metres). All modes were easy to see during the day, even in bright sunshine.

A decent price given its capabilities; ETC's Capella light is £10 less at RRP but didn't particularly impress in our testing, while Lezyne's Micro Drive Pro 800XL is more expensive but doesn't boast any kind of road-friendly lighting, and it's more complicated to use.

The Ravemen LR800P does everything really well – it's a high quality product that appears to be built to last, with fantastic lighting output (that doesn't dazzle) and it's easy to use. The run-times are great, too, and the price is right.