The Tern Vizy Light is a novel looking, barrel-shaped design with a maximum output of 60 lumens, generous run times and some novel touches. However, at this end of the r this price, a rear LED needs to be exceptional and despite some charm, the Vizy is not.

Pro: Very visible in most circumstances; pool of light seems to encourage wide passes
Con: Needs a seatpost position away from all clutter

The outer casing is aluminium alloy with a black finish and Guee etched into the side (the Vizy is a collaboration between the two brands). The LEDs are organised into two groups. Twelve of them are arranged in a rearward-pointing double column, which snares driver attention in the conventional way. An extra single LED projects a wide and very pure 360 degree arc at the floor. The idea is that this creates a much greater surface area, illuminating the rear triangle and riders legs, giving greater presence and encouraging larger vehicles to give more room when passing. According to Tern this also helps distinguish a cyclist from a motorcyclist, unlike some of the really potent blinkies. 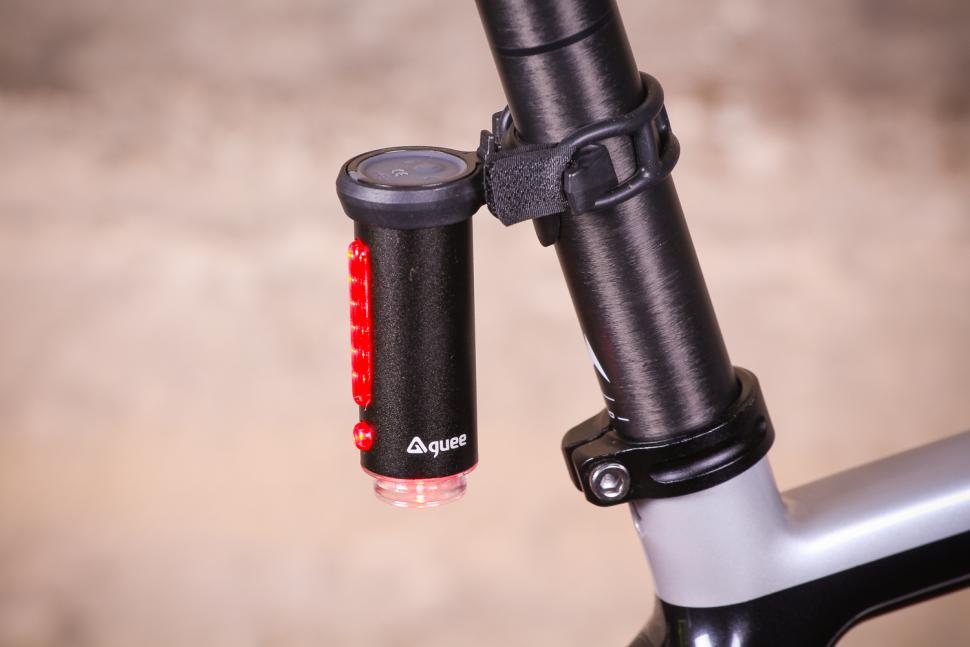 The vertical diodes use SMD LEDs, which is another way of saying they are mounted directly on the printed circuit board, permitting more to share the same space. Theoretically, this results in a more intense light. These are fuelled by a 3.7v 1000mAh lithium polymer cell, reckoned good for 5-7.5 hours (depending on setting) from a full 3-hour charge.

Read more: The best rear lights to make sure you're seen at night

Mains charging shaves ten minutes or so. The small charge indicator holds a constant red glow, turning clear when it's done. The micro USB charge cable might be a bit small for some, but it worked fine with other cables, and who doesn't now have thousands of them threatening to take over the house? Tern says the Vizy is good for 1,000 charge cycles, so should, at minimum see a good two or three years hard service before becoming bin fodder.

The slightly rubbery switch is positive and, at the centre of the light's top surface, perfectly positioned for thumbs. I've had no problems locating it in the dark, even when wearing duvet-type winter weight gloves. Much like everyone else's these days, a sustained two-second press powers it up and subsequent nudges cruise through the modes. Another two-second press powers down. The chance of it powering up in a pocket or luggage is small. 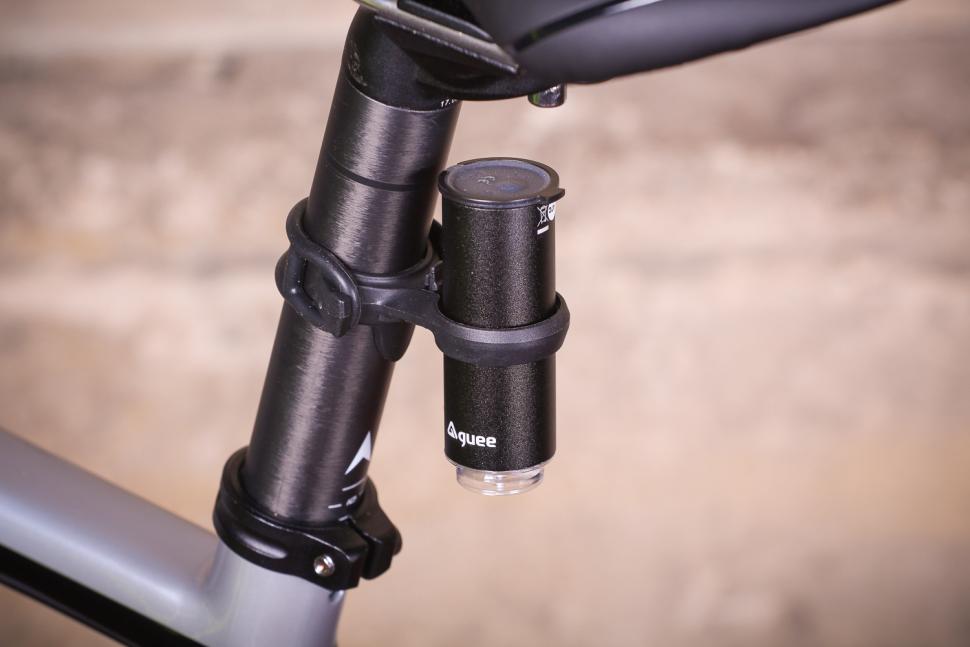 Tern cite IPX5 rating for weather resistance, saying it mustn't be submerged. I've had no problems riding for a few hours when it's been lashing down, and the odd, sustained and direct hit from the garden hose hasn't made any impression either.

The casing also feels reassuringly stout, with no hint of swirling, or similar calling cards over the past few weeks' continuous service. Mind you, I'd expect nothing less, given the price.

The mount is a simple, sturdy and generally straightforward 'basketball hoop' design. The light sides into the hoop while the curved section sits against the post and is tethered by the ubiquitous ladder strap. 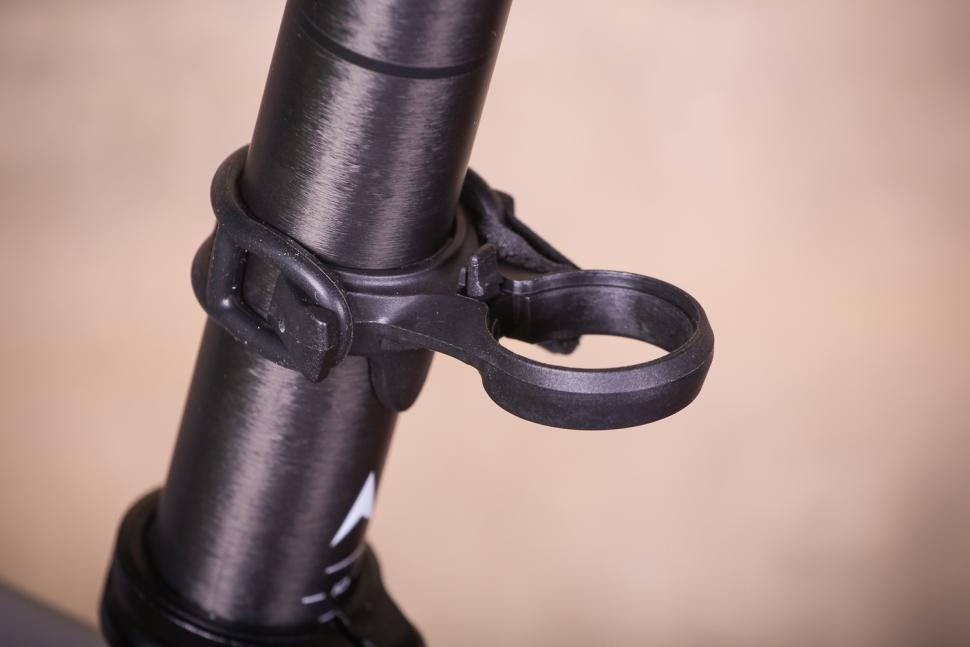 Tern say it's compatible with seatpost diameters between 27.2mm and 35mm. In practice, I've had no problems with slightly narrower diameters, down to 26.6mm. Given opportunist pilferers tend to take brackets, even when the devices have been removed, I've tended to remove both when parking up or recharging.

To be most effective the 360 degree light requires a decent distance between post and mudguard or rear wheel, such as on a smaller semi-compact geometry frameset, where there's a generous length of post exposed. No problems with my rough stuff tourer, which is built around a mountain bike frameset and runs full-length chromoplastic guards.

However, the unique selling point is thwarted if you're running a clip-on mudguard, such as the Crud Guard sported by my 'cross-inspired fixed gear winter trainer. 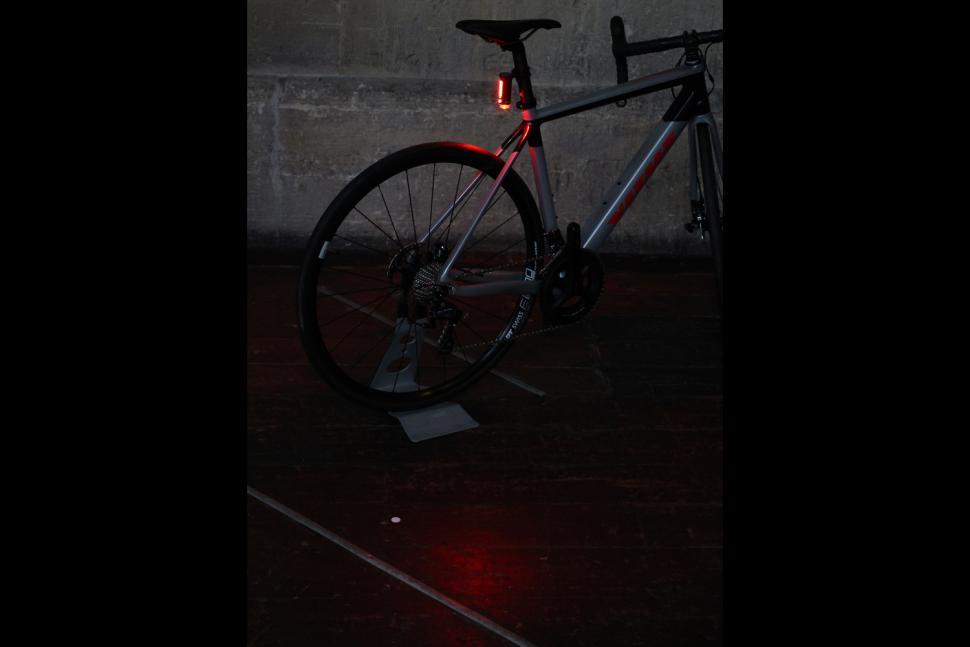 The flashing and pulsing settings are definitely the most captivating. Friends reckoned they could pick me out at 200 metres on open roads and rural lanes, maybe 225m on a clear night.

Though I liked the concept, I was a little sceptical as to how effective the floor lighting would prove in encouraging drivers to pass wide. Along open and B roads most drivers seemed to hold back, considering their overtaking manoeuvre and then passing a good two metres outside of the circle. 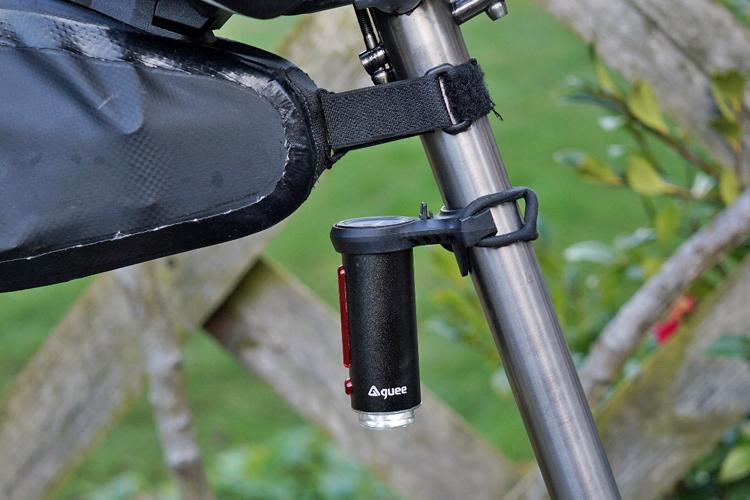 Things were less clear cut when tackling congested town centres and urban stretches. The majority of other road users heeded the rear light from around 100 metres and although it's claimed to be 60 lumens all told, it didn't enrage anyone at close quarters.

While the 360 degree, floor projected pool is pretty moot during daylight hours, the other diodes remain extrovert, at least on overcast days.

Flashing and pulsing modes are definitely the most effective, although steady has worked better than I was expecting. Run times in all three modes have all been within a minute of those advertised, which is also refreshing. 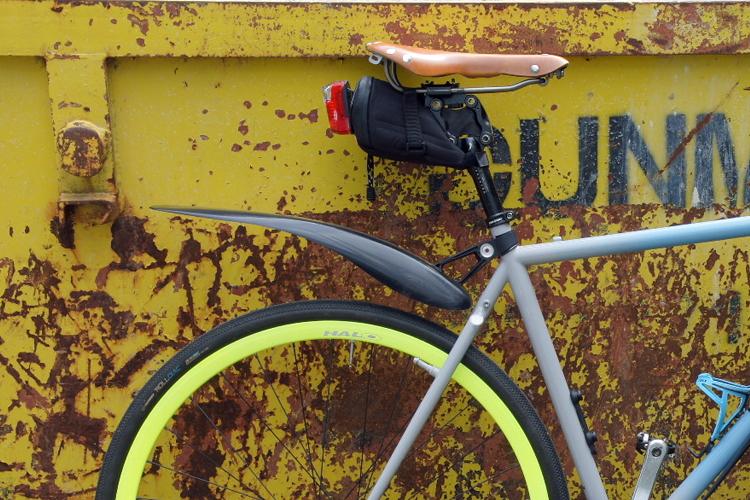 However, while this red halo was still useful when tackling roundabouts, it hasn't nailed driver attention as effectively as the Youtube video suggested. The Cat Eye Rapid X or Moon Nebula have proven consistently better, especially. Both cast a 260-degree arc, obvious if you glance down.

I've enjoyed using the Vizy light in certain situations and on certain machines but at this price a light needs to be universally great, especially if it's being swapped between bikes of different genres and configurations.

Tern says "The Tern Vizy Light projects 360° of radial light on the ground while you ride. This creates a clear signal for cars to pass at a safe distance, and illuminates your body, so drivers can see you're a cyclist and react accordingly. It's weatherproof, rechargeable, and beautifully encased''safety radically reinvented". My feelings "Very good in certain contexts-open roads but not quite universal enough that I'd pay £44".

"* Creates a wide circle of light on the ground, encouraging drivers to pass at a safe distance

* Illuminates you and your bike, so drivers know you're a cyclist and react accordingly

* Includes an additional rear-facing light, for extra visibility from behind

Aluminium casing is a nice touch. Seemingly well protected from the elements, in the everyday sense.

Rate the light for design and ease of use. How simple was the light to use?
5/10

Secure and simple enough. Other ladder type straps make brilliant substitutes should you lose the original.

Good in the everyday sense. Passed my usual tests with flying colours.

5-7hrs Not earth shattering but practical for commuting and general riding.

Very good in certain contexts, disappointing in others.

Performs very well in certain contexts but there are better options-especially if you're fond of post mounted, clip on mudguards.

Overall, the Vizy has tremendous potential and has performed very well along unlit roads. However, the design isn't universally effective. It doesn't work with bikes using post mounted guards and there are cheaper models, such as Cat Eye Rapid X, or Moon's Nebula that project a surprisingly generous arc of light, regardless of the bike's genre/configuration.

Very effective in some contexts and provided machines have sufficient post showing and more traditional mudguards.

Did you enjoy using the light? Yes, proved useful on my rough stuff tourer along pitch black lanes.

Would you consider buying the light? Fell short of my expectations, so not in its present guise.

Would you recommend the light to a friend? No, there are much better lights.

Some nice touches but not universally compatible, or effective, which a light at this price point needs to be. 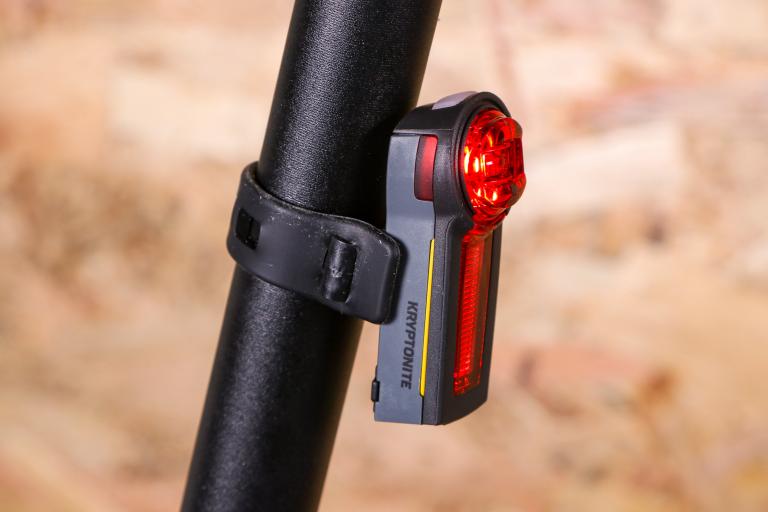 Bright and easy to use, with good battery life – a very good commuting option 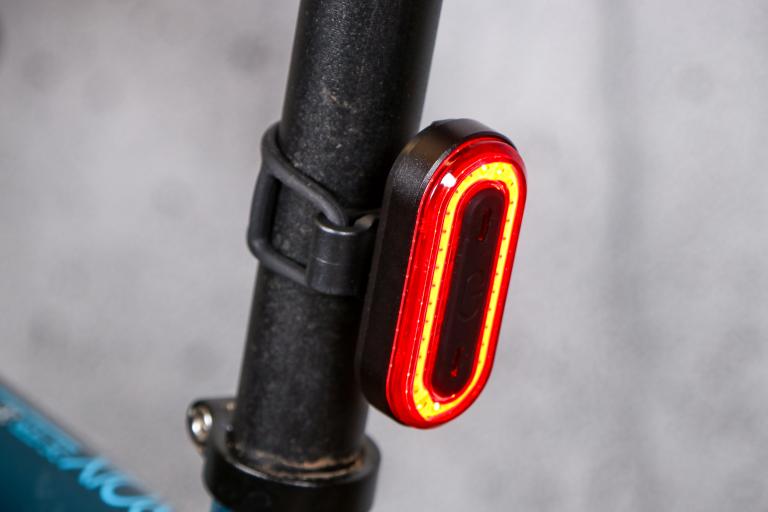 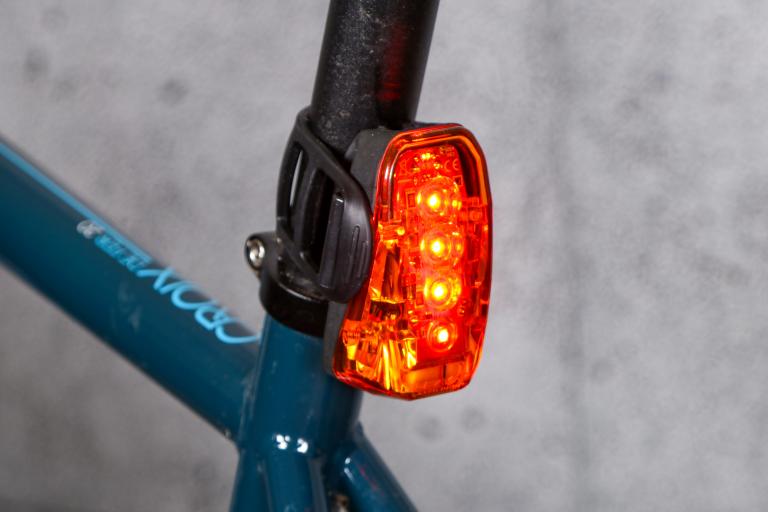