6
10
Interesting modular light that can charge your devices and even power lanterns and speakers
Plenty of power for dark lanes
Configurable beams
Battery can be used to charge devices
Beam can dazzle
Mount is fiddly
Would benefit from two-way switching
Weight:
251g
Contact:
www.silverfish-uk.com
How we test

Knog's PWR Trail 1100 is a decent light that's part of its modular PWR system, and it's bright and configurable. The fiddly mount isn't the best, though, and in a part of the market that's crammed with really good lights it doesn't really, well, shine.

The PWR Trail 1100 is a solidly built light with a machined alloy body, three main beam LEDs and a ring of nine lower power LEDs.

The PWR system is modular, so in theory you can swap between different heads and batteries, and even add accessories that run from the batteries such as a camping lantern or a bluetooth speaker. A more likely use case is whipping the LED head off and using the battery to charge your smartphone or your GPS; there's a standard USB socket inside so you just need to remember to bring the right cable. 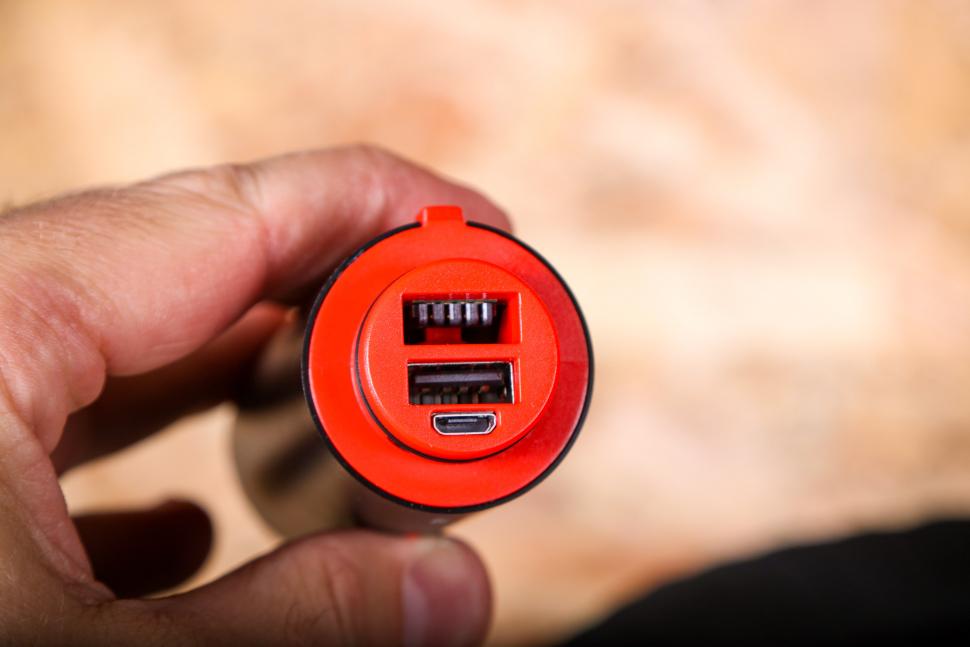 If you're relying on your light for seeing by on a ride then you'll need to weigh up battery used for that against battery used for charging stuff, but filling up a smaller GPS battery, for example, doesn't make much of a dent on your run-time. If you're charging an iPhone or something you'll knock the available lighting down considerably.

How useful is it as a source of power? Well, it depends what you're doing. If you're planning a bikepacking trip and you're camping overnight rather than riding, it might be just the ticket for getting you to your camp spot and giving your devices a boost while the kettle's on. Similarly, if you're doing a long ride that might finish a bit after dark, there's probably more than enough capacity in the 5,000mAh battery for you to trickle some into your phone at a cafe stop. If you're on a long audax where you'll be riding through the night, you'll probably need all the charge for lighting your way. Horses four courses.

The light attaches to your bar using an offset mount that sits the light either above or below your stem, depending on which way up you fit it. I particularly liked the lower mount point as it's very neat-looking and keeps nearly all of your bar real estate free, though if you run an out-front mount on your bike for your computer it can be harder to access the light to change modes. 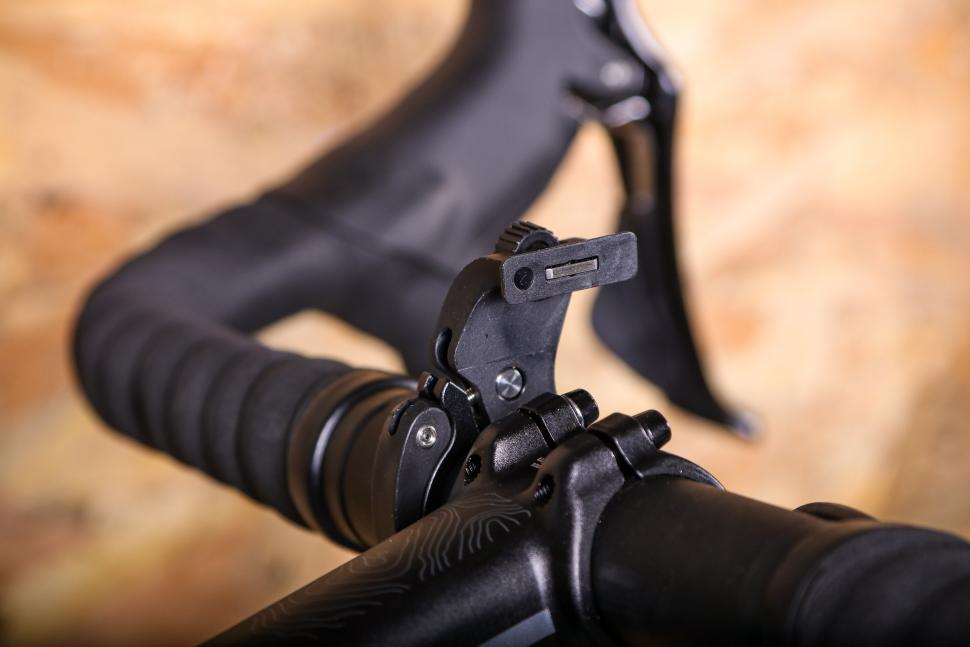 The light attaches by sliding into a groove, and a small thumbscrew tightens into place in one of two locations on the body of the battery. It's a system that works well until it doesn't: if you get mud or muck into the groove then it can be hard to get the light to mount, and it's possible to tighten up the light when it's not properly located. If you do that, it's liable to work loose. 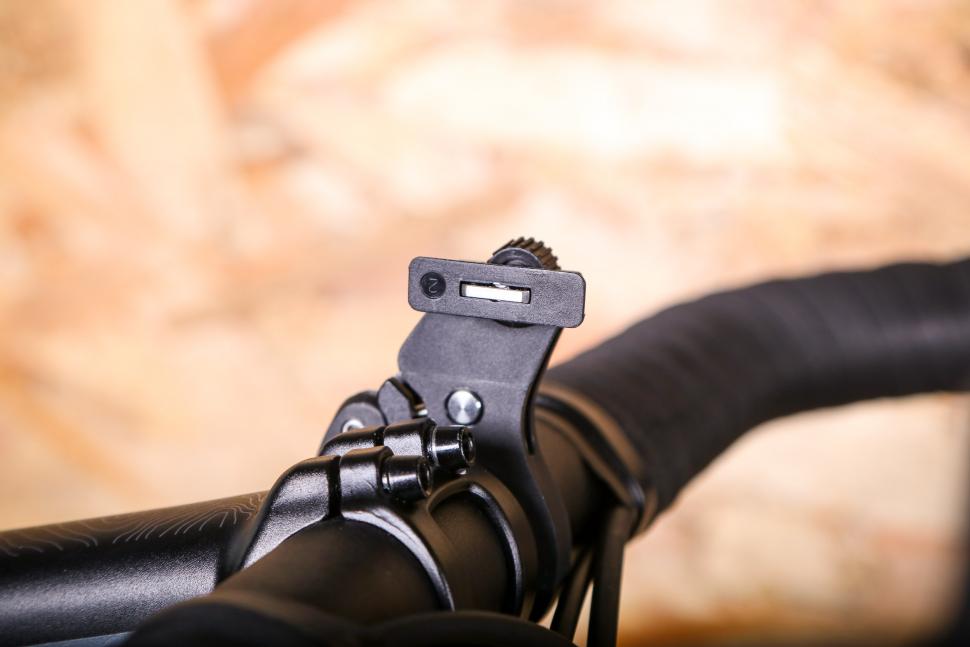 Mode switching is done by twisting the head unit, and it's easy to do even in thick gloves. On the maximum 1100-lumen setting the Trail 1100 will run for under two hours and it's very bright – great for empty lanes or the trails. The beam is designed for mixed use, so it's wide and not cut off above the eyeline; on full beam it's certainly too bright to use on the road without worrying about dazzling oncoming traffic. For road use I found that the 600-lumen, 2.5hr Mid mode was too bright, and the 90-lumen, 18hr Stamina mode not enough.

Luckily, the PWR Trail 1100 can be programmed using Knog's ModeMaker app for PC or Mac. Plug the lamp head in and launch the program and you can select the modes you want available, and set up custom modes for your own riding too. I tended to just use a high beam, a low beam and a daylight flash just using the outer LED ring.

It's a pity that the twist mechanism doesn't allow you to twist one way to go up the modes and the other way to go down them, because if you want a flashing mode in the mix you'll always end up toggling through it when you're switching from low to high. 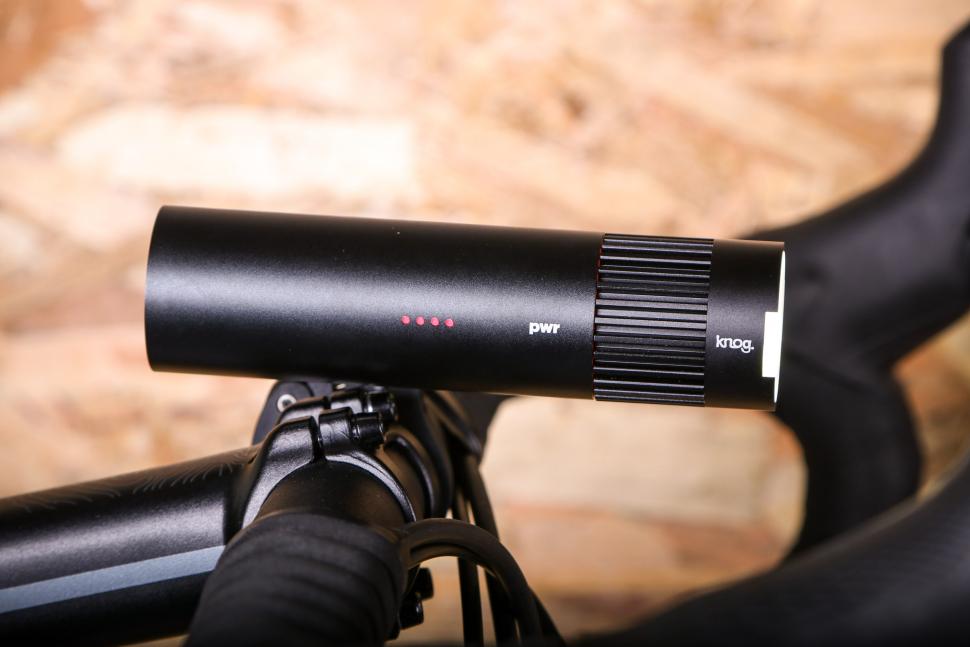 Anyway, I set up the light with a mode that gave me enough light for road riding at night and about 8 hours of battery life, so enough for a summer all-nighter.

There's a four-LED battery indicator on the side of the light to give you a quick visual on the battery state. The light will run for up to 300 hours on the most economical flash setting, apparently. I didn't keep a fortnight spare to check that.

Waterproofing is good – the rubber seal between the head unit and battery is nice and snug, and there are no external buttons to let water in. I didn't have any water ingress issues during testing that included some fairly aggressive hose treatment when cleaning the bike. 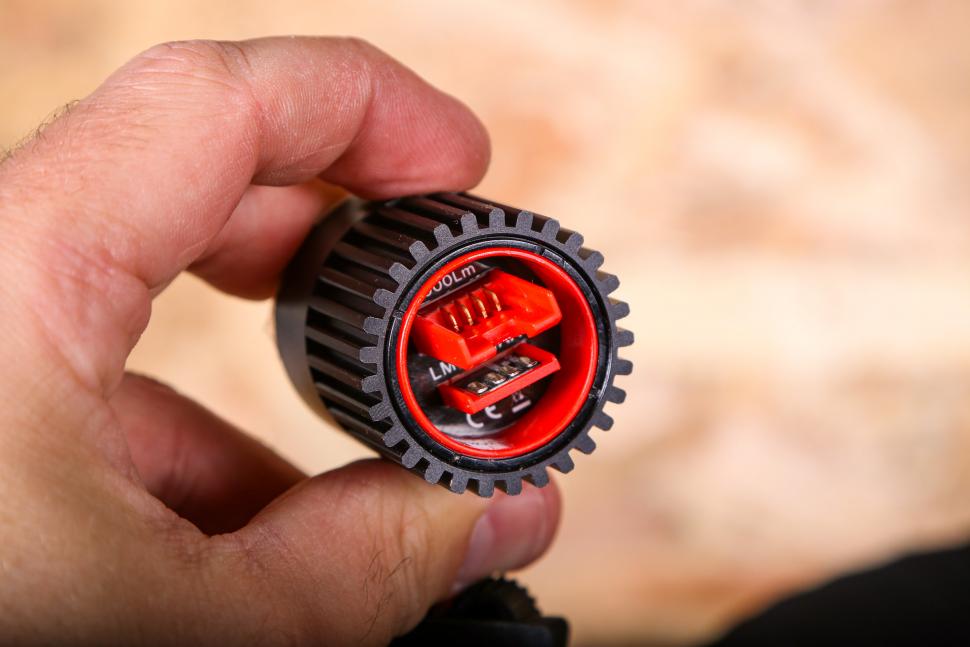 So who's this light for? It's not specifically marketed at road riding, and in reality it's better for the quiet lanes and byways than for a commute.

It's not a bad light, but for the same kind of money you can buy better: the Ravemen PR1200 has a twin lens with a cut-off beam for riding on the road, a run-time indicator and a wired remote for changing modes without taking your hands off the bar. Even though it's getting on a bit, it's still hard to beat for under a hundred quid.

If you don't really need the modularity of the charging capability then the Magicshine ALLTY 1000 is also a good bet.

If you want to buy into the Knog PWR system and you're genuinely interested in some of the other modular options then this is a good package to start with, but as a standalone light it's not the best you can get for this kind of money.

Knog says, 'PWR Trail is a modular bike light. But it's not JUST another bike light. Not only is it a high powered bike light, but simply take the product apart and you have much more. A lighthead and a PWR Bank to charge devices that is also the battery for all products in the PWR range.'

Hate it when you run out of battery with no warning? That'll never happen with PWR Trail, with 4 built in battery indicator lights. Tap the bottom of the light to activate the battery indicator. 4 lights = fully charged, 2 lights = half charged etc.

EASY TO MOUNT & USE

This light can be mounted on top or below your handlebars, directly under your Garmin, or on your helmet. It comes with a side mount and shim that fits handlebars 22.2-31.8mm diameter. Once mounted, using PWR Trail is a breeze. It's a simple twist-head operation to turn light on & off and to scroll through light modes.

Press the red button to release the lighthead, and use the PWR bank to charge your phone, GoPro, cycle computer or other device. 1 hour riding @1000 lumens means you can top up charge your iPhone by 75%. Charge your PWR Trail using the included micro USB cable, charge time is 3.5 hours.

PWR Trail outputs a max 1100 lumens, and can run for up to 300 hours on Eco Flash Mode. Its elliptical beam gives broader, bright road coverage. It comes with 6 pre-programmed modes, and you can program the light to suit your needs with Modemaker. You can control brightness, adjust runtimes and add new light modes.

Mostly very simple, although the mount is a bit fiddly and the ModeMaker app is a bit of a learning curve.

Not the best clamp out there.

No issues at all.

Pretty good on a mid-power mode.

Decent: bright beam that's better away from other traffic.

Alloy body is holding up well.

Not especially light, but that's down to the build.

On a par with similar lights.

It's decent: a bright beam, modular options are available, the battery bank functionality can be useful.

Fiddly mount, switch would be much better if it was two-way.

Did you enjoy using the light? Mostly, with some reservations.

Would you recommend the light to a friend? If they were really interested in the modularity.

It's a decent light overall, but there are a few niggles and you'd need to be invested in the modularity of the PWR system for it to stand out against other lights in the same price range that do a better job of just the lighting bit.