9
10
For riders who want to carry their summer speed through the winter without puncturing, these are the tyres for the job
Weight:
235g
Contact:
www.conti-tyres.co.uk
How we test

The Continental Grand Prix 4 Season is the all-weather tyre against which all others are measured, and there's good reason for that: it's light, grippy, puncture resistant and gives away surprisingly little in performance to its summer-racing counterpart, the Grand Prix 5000.

The Grand Prix 4 Season is one of the best known and best loved tyres of Continental's expansive range. Although the German brand aims to broaden its appeal by calling it an 'all-year-round tyre', many performance-orientated riders use it as a training tyre during the off-season. Watch any club run roll out between October and March and you're guaranteed to catch a glimpse of the distinctive brown mesh sidewalls. 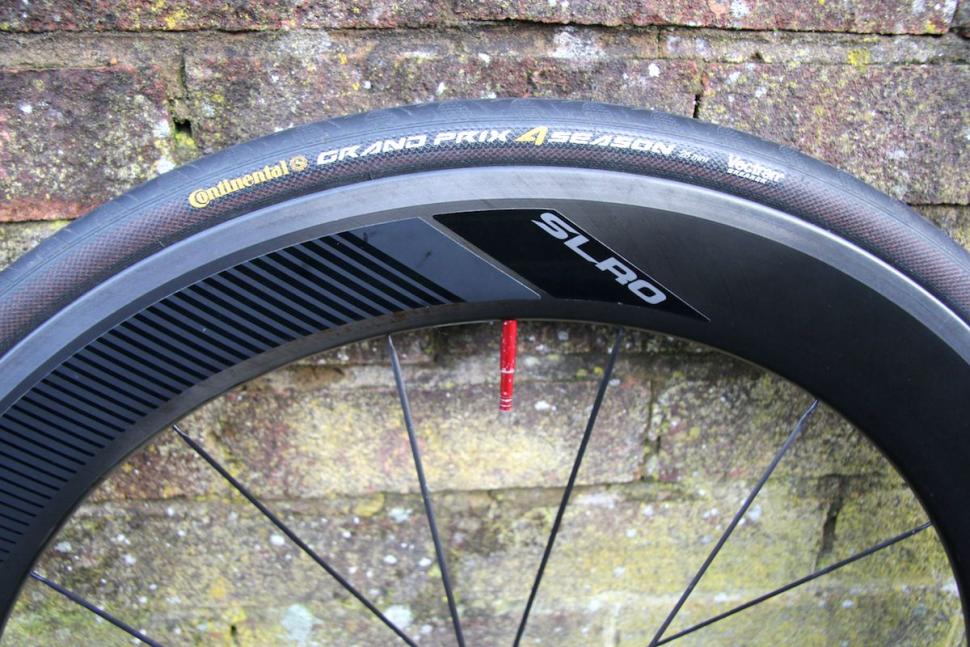 The reason why the GP 4 Season is a favourite with racers during the off-season is because it gets the balance exactly right: its weight is not much higher than that of the GP 5000 (235g compared to 220g in 25mm), meaning it isn't slowed down by an excessively thick tread. Despite its relative thinness, however, it still supplies excellent puncture resistance, grip and durability with suppleness and rolling speed paying less of a penalty than you'd expect.

Continental claims a double layer of its Vectran puncture-protection insert (made from a multi-strand thread spun from a melted liquid polymer, if you want the chemistry lesson) supplies enormous tear resistance at a very low weight. Conti also says it doesn't adversely affect rolling resistance. 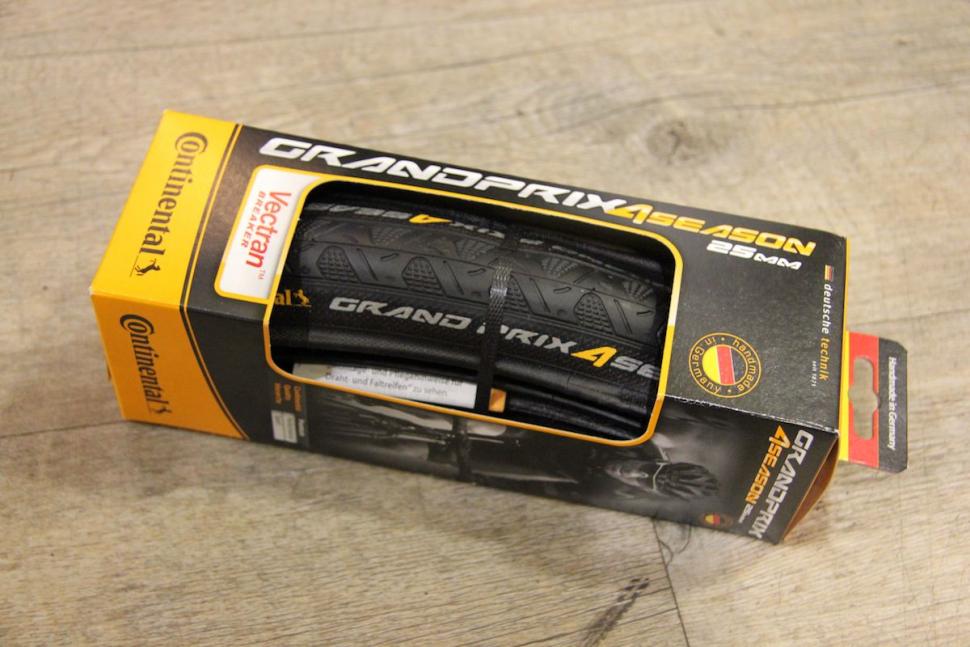 The sidewalls, which do feel considerably thicker than those of a summer tyre, are protected by Duraskin – the brown mesh mentioned earlier – which is a polyamide fabric wrapping the entire casing under the tread to supply another layer of protection against foreign objects, the edges of potholes or other threats to its integrity.

Between finger and thumb, you can feel that the GP 4 Season is stiffer than a lighter summer tyre because of this extra protection, but for the casing Conti uses the same thread count at 330tpi (actually three layers of 110tpi) as it does in the GP 5000s. Compared to rival all-season tyres such as the Michelin Power All Season with its three layers of 60pti, it is much more supple.

I've been riding the Continental GP 4 Seasons since the clocks went back on a set of PowerTap wheels with tubeless-ready DT Swiss R460 rims. There was no problem fitting them with thumbs only, even though tubeless-ready rims can be a struggle. There's no tubeless version of the GP 4 Season yet, but as Conti has gone tubeless for the first time with the GP 5000, one can't be far off.

On the rim they measured a nice, wide 27mm and at 100psi felt responsive but not harsh. The ride quality isn't as refined as I'd been used to on high-end summer tyres even though the weight is similar, and that's attributable to the extra reinforcement. 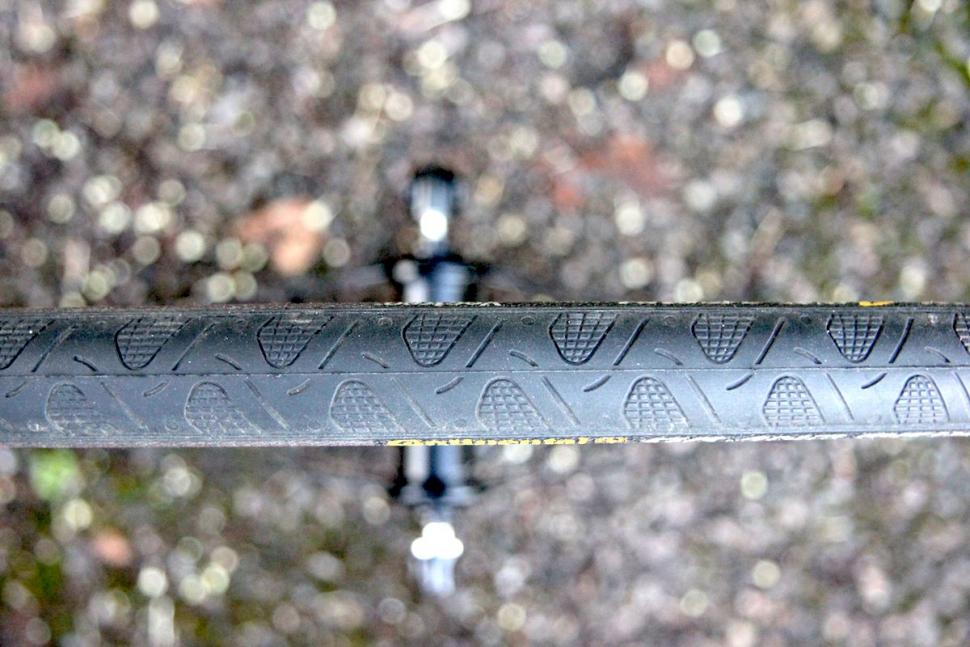 However, I found I was still able to average 20mph around my test loop at around 200 Watts. Interestingly, though, once I started riding the Power Michelin All Seasons for my review of those, the average speed dropped into the low 19s for the same power and setup. As I mentioned in that review, there are many factors at play including air density, colder roads not heating up the tyres, but based on my observations I would say the Grand Prix 4 Seasons are certainly faster than the Michelins, but not as fast as most pure summer race tyres.

I haven't had a single puncture on them, nor a dicey moment in the wet. The tread compound feels well judged – not so sticky that it slows them down, and not so hard that it can't grip. 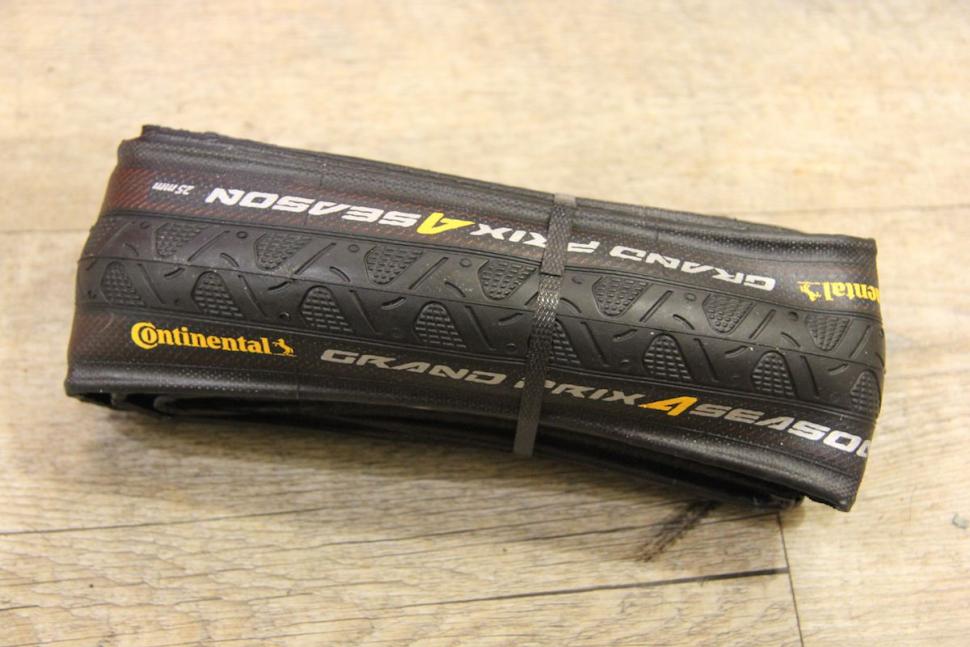 As for durability, they're looking good so far, and I have high expectations for them in this area.

To sum it up simply: I can't claim to have tested every all-season/winter tyre out there, but out of all the ones I have I would choose the 4 Season.

For riders who want to carry their summer speed through the winter without puncturing, these are the tyres for the job

Continental calls the Grand Prix 4 Season "the toughest performance tyre on the market".

"Thanks to its DuraSkin anti-tear fabric and two Vectran anti puncture strips, the Grand Prix 4-Season holds up under extreme conditions. In the Paris- Roubaix race, the "Hell of the North", cyclists equipped with DuraSkin™ enhanced tyres have the fewest tyre related problems during the race. Incorporating our special wear resistant carbon compound, the tyre is characterized by very good mileage performance as well as excellent adhesion on wet roads and at low temperatures.

"With 23, 25, 28 and 32mm versions, the Grand Prix 4-Season makes it possible to select the right tyre for various road qualities, type of bike and comfort requirements. A double Vectran Breaker belt under the tread raises the puncture and cut protection to the highest level available on the market. Featuring a total of five plies beneath the tread, plus a sixth Duraskin layer, it's ideal for rough sportives and general bad road conditions."

Styled on the GP4000 S II, but with extra protection layers for harsh weather conditions.

I haven't yet put the thousands of miles on them that they claim to be able to withstand, but they're looking good a few hundred miles in.

Very low for this type of tyre.

There have to be some compromises if a tyre is to be puncture resistant, so it feels a little stiffer than a summer tyre.

At its full RRP it's pretty expensive, but no more than Vittoria's Corsa Control G2.0, and it's very good.

Superb for the off-season.

Everybody hates winter (except maybe cyclo-cross and track riders) but the Conti GP 4 Seasons make the transition easier because they feel faster than the average winter tyre.

There's nothing I disliked about it.

The price is at the upper end of premium, though they're almost always discounted by most retailers.

Did you enjoy using the product? Absolutely

Would you consider buying the product? Yes, but not at full price.

Would you recommend the product to a friend? One hundred per cent.

I would go as far as to say that these are the ultimate off-season tyre. If you're looking to carry on riding at a decent speed through the winter, you want peace of mind that you're not going to hear the dreaded hiss every time you run over a thorn in the rain, and you need to stay rubber side down even when the lanes get really coated, then these are the ones. 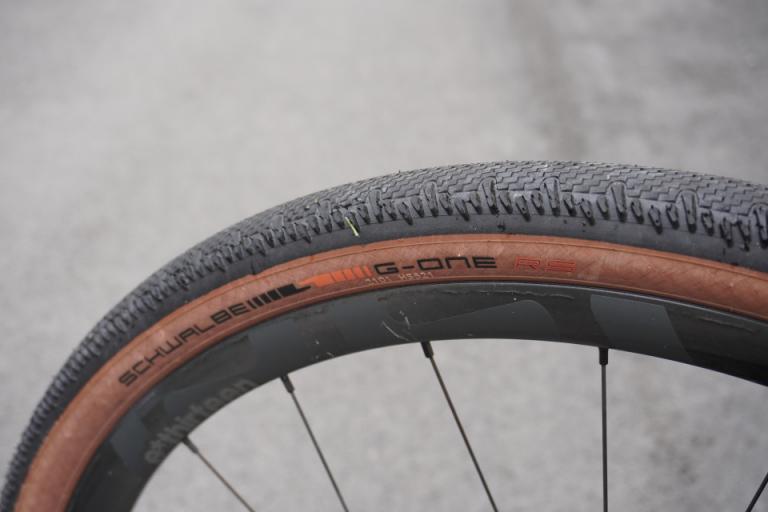 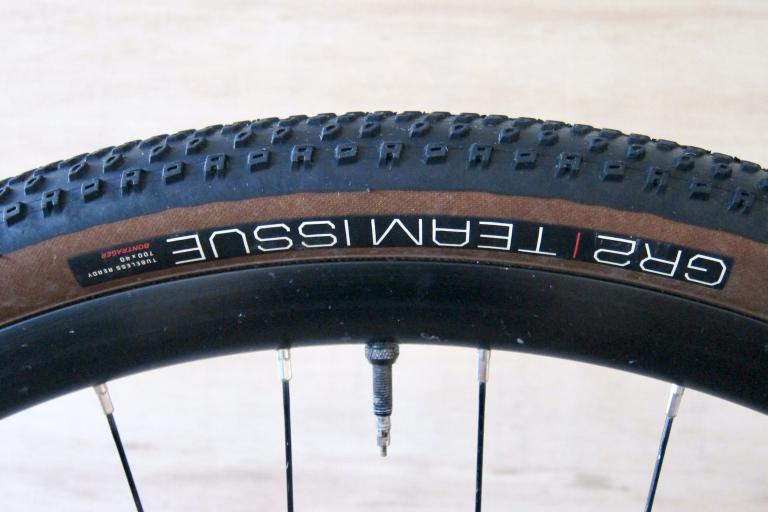 Nippy on road and copes with most things off, light and yet sturdy too, a lovely thing 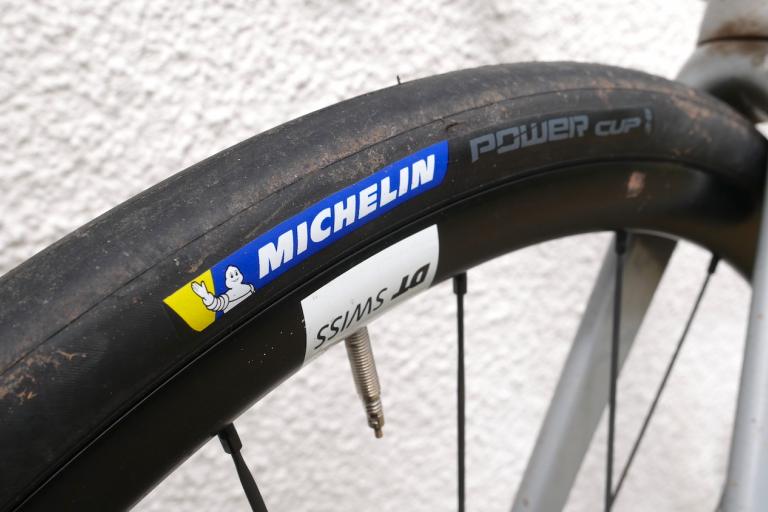 Great grip and feedback in all conditions, and tougher than their speed suggests 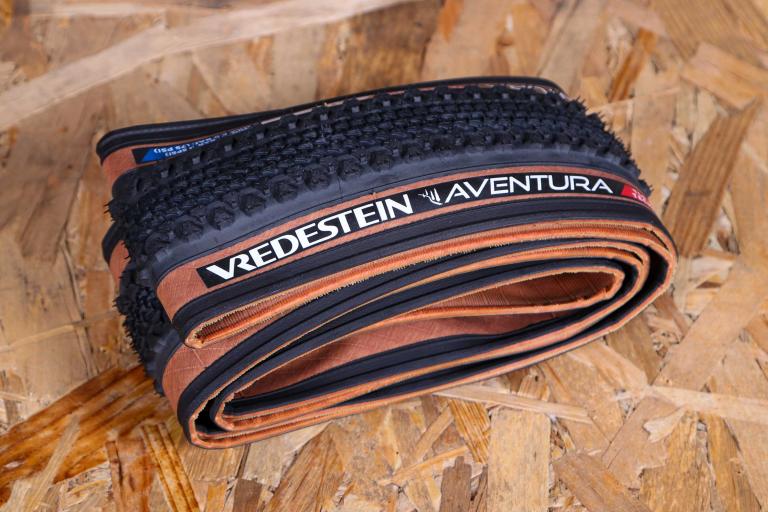 Light, fast and smooth, with grip that surpasses expectations