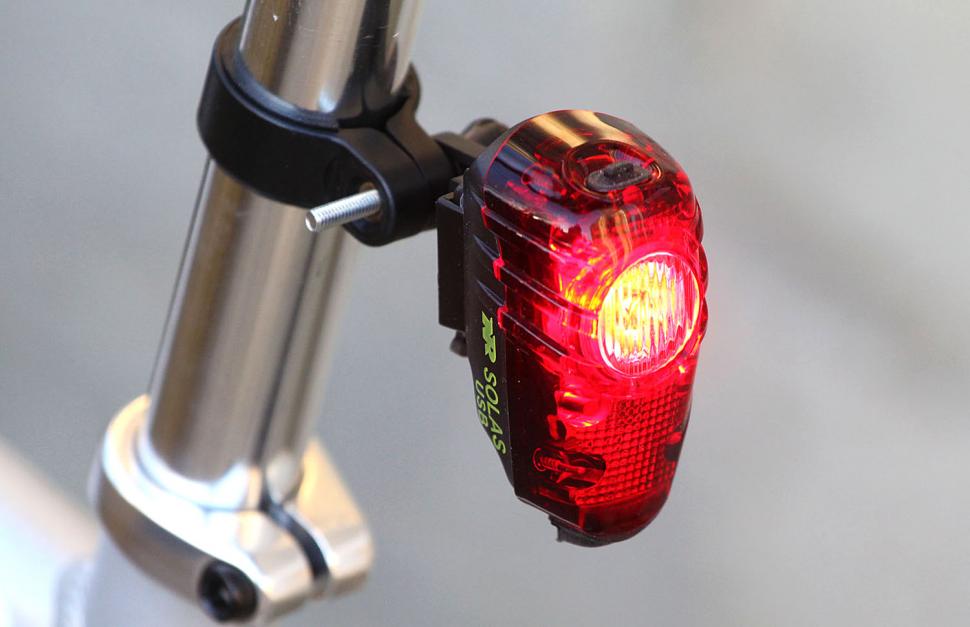 There's nothing truly innovative about the Niterider Solas rear light - it has plenty in common with other modern tail-lights, but it does its job well and is carefully thought out.

The Solas is a modest sized light in the Smart 1/2w mould - you've probably seen a million of them by now. Translucent red casing for 180 degree visibility, vertical clip (nicely curved in on itself with a retaining noggin for added security) and a clear plastic circle over the LED. Unlike some others, the Solas just has the one LED which pumps out a healthy 2W of power.

The two flashing modes are pretty eye-watering, although not as manic as some, so they should cut through the urban jungle very nicely. Where the Solas really scores though is by having a low power steady mode for group riding. While that won't make you visible from several miles away, it's enough to keep you safe on country roads and if you're on a long night ride, say the Exmouth Exodus or a long audax, it's not going to make your fellow riders feel like they're riding behind a mobile disco. That might seem like a minor thing, but to some people these things do matter and I can't think of another high power light that offers this.

The li-ion battery charges via a micro USB cable which plugs in underneath a honking great rubber plug at the base of the unit. Niterider only claim that the light is 'water resistant' but it passed the backyard hose test and I've not had any problems since.

Run-times are pretty good, up to 36hrs on the low setting although I suspect most people will just opt for the fast flash, which goes on for 18hrs. There isn't a runtime indicator although you'd have to be pretty sloppy to run it down so far that there isn't even enough juice for a low power trip home.

The mounting bracket is very basic, just the usual plastic clamp and clip arrangement, no fancy silicone straps here. I've had it clipped to the light loop on my Carradice and the long clip with a retaining noggin is very secure. I'd have no concerns about it jumping off mid-ride.

At an RPP 1p short of £40 it's not cheap so it's a question of how much you value the versatility it offers. I really liked it, but I'd want a hefty discount before I actually bought one.

"The Solas 2 Watt Tail Light is brand new for 2012/13 and features a powerful 2 watt LED, 4 modes (2 flash/2 steady) and is USB rechargeable. We've implemented what we call 'Group Ride Mode' for cyclists who need to still want to stay visible and safer but not annoy others in the pack."

Nice spread of light (180 degree) thanks to clear casing. Well thought out modes.

Feels a little hefty, but really - who cares?

There's no getting away from the fact that this is a pretty pricey rear light although it's much cheaper than the willy-waving likes of the L&M 180.

Nice modes - especially the 36hr group ride mode. That's going to be enough to get you round a long audax without any worries.

Would you consider buying the product? Maybe, but not at full RRP.