7
10
Light, sporty and well designed for travel. A serious investment but probably worth it if you travel a lot
Weight:
8,210g
Contact:
www.qoroz.com

Historically, the approach to travelling with a bike has always been either a case of semi-dismantling your pride and joy and packaging it up in a bike bag or box, then leaving it nervously to the vagaries of airport baggage handling, or taking a folder instead - enter, the Qoroz Travel Won. The Qoroz Travel Won was designed by ingenious types to try and address that issue, to make a bike that's genuinely good to ride and suitable for travelling with as well. 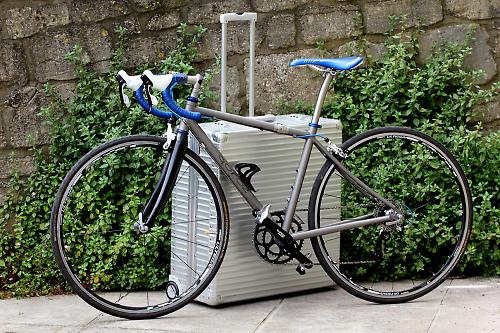 Weighing 8.21kg, it's a fairly light bike, which given that it's designed to be sporty and also taken as luggage on a plane is pretty important. The titanium frame comes with SS couplings to allow for it to be dismantled for transportation, either in a bag (£170) or a hard aluminium Rimowa suitcase, available for £400. The hard suitcase weighs 5kg. 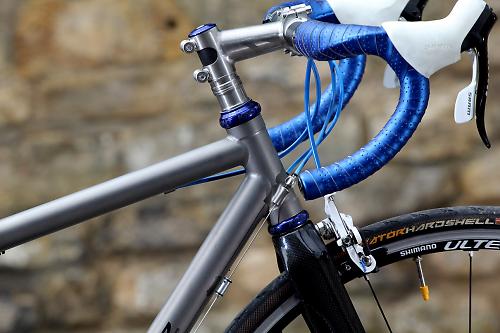 Out on the road, the first thing I noticed was the road buzz. Given it's a titanium frame fitted with carbon forks, both known for reducing buzz, this was a somewhat disappointing surprise, and slightly baffling. However, a chat with the guys at Qoroz revealed that this was probably due to the gauge of the tubing, which was off-the-peg, and usually used on larger framed bikes. For a small frame and a lighter rider, it was therefore over stiff, hence the road buzz - that wouldn't be the case on a Travel Won you'd buy. The forks fitted were also those usually fitted on the Race Won, again very stiff for a small frame. For ride quality, the Travel Won was pretty responsive and sporting, with a good turn of speed on the flat. It wasn't quite as eager as I'd expected however, particularly on hills, where it felt a little on the unwieldy side with a fair degree of flex at the front. Likewise, on descents it wasn't as surefooted and confidence inspiring as it could have been. It did corner well, although there was some toe overlap to be aware of on tight turns. 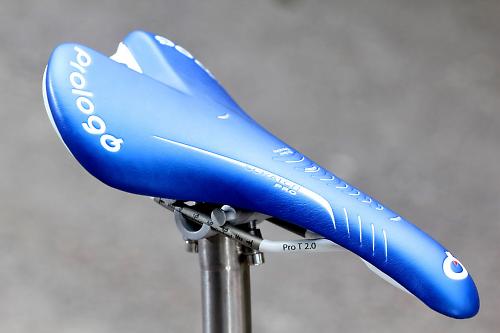 I personally didn't find the Prologo saddle to be at all comfortable, but that's always personal preference anyway. It certainly didn't feel appreciably different from a 'normal' road bike, and rode with as much assurance and power transfer as a bike without SS couplings. There was no loosening off of the SS couplings during any of the test rides, and the spanner (provided) isn't hideously heavy or large to carry along on rides just for peace of mind. Qoroz specialize in bike fit, customization and ergonomics. The Travel Won is designed to be a bike built up to the buyer's own specifications and requirements and then set up to fit them absolutely, including tweaking of tube gauge, geometry and components where necessary. The idea is to have an utterly happy rider. 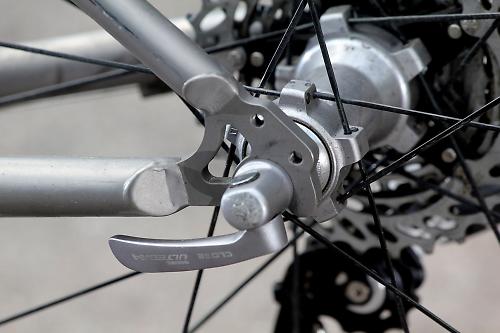 Packing and unpacking the bike is relatively straightforward, although does require a certain amount of confidence in dismantling bikes. In that respect, it's pretty similar to the process of packing a 'normal' bike into a bike bag. Wheels need to be removed, SS couplings undone, forks removed, brakes removed and bars turned in order for the bike to fit into the case. It wasn't an entirely trivial process, but with confidence and practice took around 30 minutes to either disassemble or reassemble. Not a bad time at all. In the Rimowa case, it fitted neatly and securely, and there was little concern about the safety of the bike in transit. The case is sized such that it's not going to be outsize luggage, and it's easy enough to transport, with sturdy wheels and two handles. 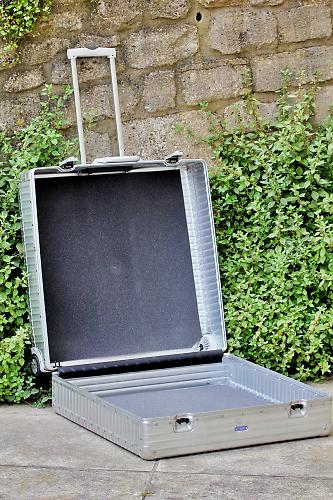 There's no denying that the Travel Won is a great concept. A full-size decently performing road machine that can be carried around the world on business trips or holidays without the fuss of normal bike carriage. BUT, and it's quite a big but, there's little or no room for clothing and extras within the bike case itself, once the bike is in there, and many airlines, even on long-haul routes, only allow one piece of hold baggage within the cost of the ticket. So, this is always going to be an additional piece of luggage, on top of clothing and other sundries (unless you're a hand luggage tote packer anyway) thereby costing extra. However, it is ideally suited to train travel, and in particular it addresses the frustrating issue of many continental fast trains – such as the TGV- that state that bikes have to be dismantled and packed for travel. If you're heading to the South of France, this is spot on. 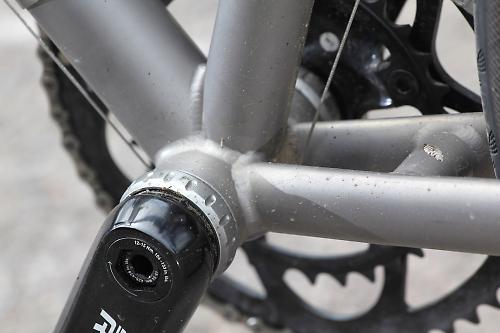 This is a very pretty bike to look at, and the understated titanium frame is nicely contrasted with some seriously bling blue accents with a blue Prologo Scratch Pro saddle, the bar tape and custom components, such as the matching blue Chris King head set. The white SRAM Apex groupset on the build I tested also lifted the looks of the bike into the realms of quite special. It's a bike that certainly looks the part. 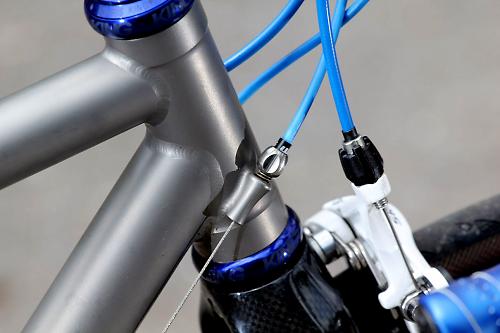 It's an extremely well designed bike, with clean lines and offers a reliably sporting and enjoyable ride, but unless you're going to make it your only bike, or travel frequently, this is a pricy solution to a quite specific and slightly limited problem.

Light, sporty and well designed for travel. A serious investment but probably worth it if you travel a lot.

Aimed to be a full size, full performance road bike for people who want to travel with their bike.

The small frame I trialled was neither too upright and sporting, nor too laid back. It's designed with long distances and sportives in mind and it shows.

Compared similarly with other bikes of this size. No issues with height and reach.

Qoroz are very hot on a well tailored fit for every customer.

Not the most comfortable ride, due in part to road buzz issues, but sporty and pacy, if a bit unwieldy on hills and not quite as responsive as expected.

Road buzz most likely due to tube gauge being wrong for the size of the frame/weight of rider.

Frame felt pretty stiff (even with SS couplings) but some flex at front end when climbing.

Not bad power transfer, but not quite as good as it felt like it should be.

Yes, some toe overlap. Not a massive problem other than on very tight corners.

How would you describe the steering? Was it lively, neutral or unresponsive? Neutral steering.

Handled well on the flat, but a bit skittish on climbs. Cornered well.

Saddle, although a very personal choice anyway, was not right for me.

Perhaps a stiffer bottom bracket might have helped the responsiveness and the bike's climbing ability.

Rate the bike for efficiency of power transfer:
6/10

Felt like the bike promised more power on first pedal strokes, than it actually delivered.

Not bad, but again, not as aggressive as it felt like it could be.

Pretty stable on the flat at speed.

Stable and steady at low speeds.

Cornered quite reliably and smoothly.

Rate the bike for cornering on descents:
5/10

Some ungainliness on descending.

Some flex and power loss when climbing.

Rate the drivetrain for performance:
9/10

Wheels and tyres worked very well in a variety of conditions, including very wet.

Braking not as reassuringly effective as desired.

Bars and levers well set-up and sized for smaller riders. Bike spec was set up to my height and sex (partially remotely rather than full in-person custom set-up).

Would you consider buying the bike? Possibly if I were to get a very well paid job that required frequent overseas travel.

Would you recommend the bike to a friend? Yes. See above. 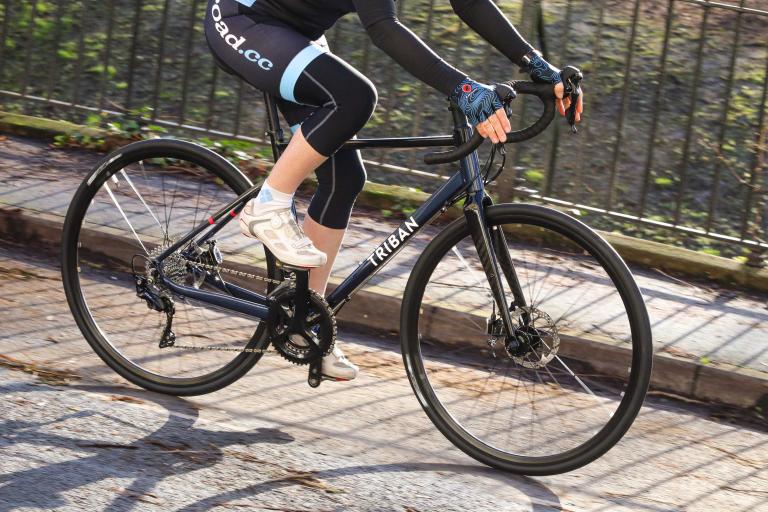 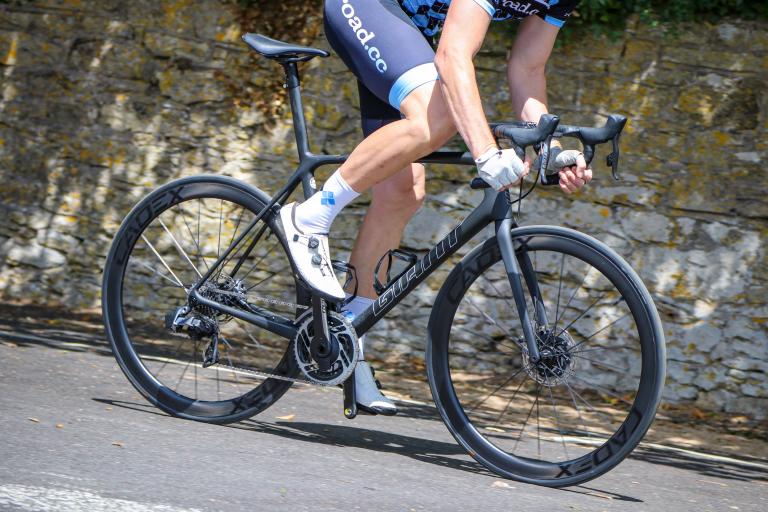