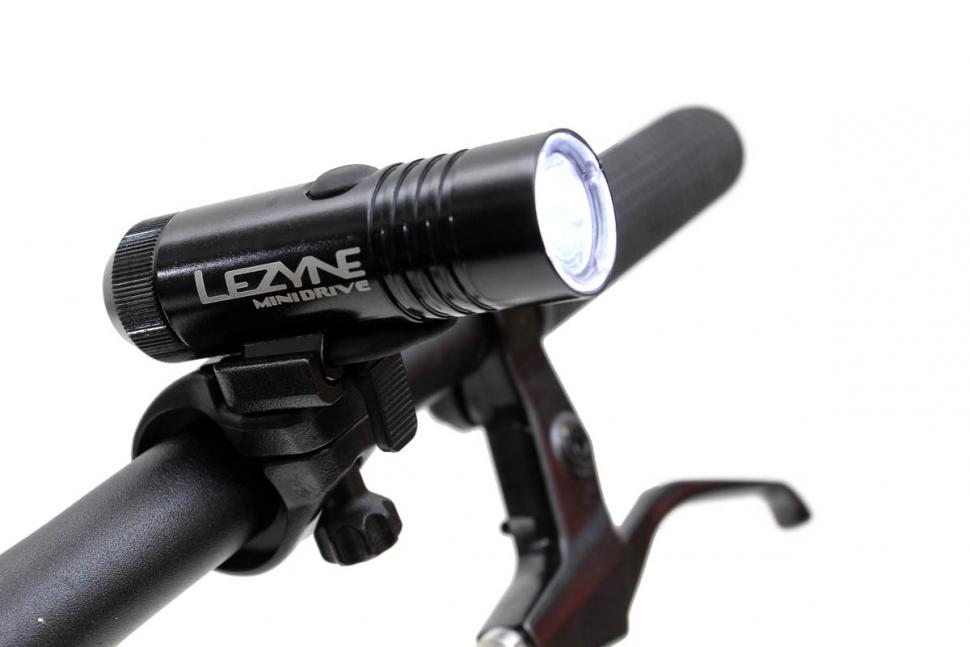 6
10
Stylish, but not all that useful for anything but short commutes
Weight:
95g
Contact:
www.upgradebikes.co.uk
How we test

Lezyne's new family of lights are very pretty and our Shaun rated the Super Drive when he reviewed it, so how does it's little brother, the Mini Drive, stack up?

The Mini Drive is a compact wee thing with a bright and shiny silver case. It's a pleasing package although the chunky bracket means that it takes up more bar space than you might expect. Inside there's a single led, powered by a LIR123a li-ion battery. The battery is accessed by unscrewing the back of the light and replacements are cheap and easily available. Lezyne make a point of telling you this, which is unusual. Batteries in rechargeable lights are usually either bespoke or hard to get at in a your-warranty-will-go-up-in-flames-if-you-try kind of way. It's a nice touch and with a light that only has a one hour runtime on full power, potentially useful, although having to manage a recharging regime with such a small turnaround isn't my idea of a good time.

The battery supplied is only rated at 600a/h but there should be enough space inside the casing to accomodate a battery with a heftier charge should you want to upgrade, and given the runtime you might.

Lezyne quote 150 lumens for the Mini Drive. That's on the cusp of serious light territory, but the payoff is a distinctly modest runtime.

Being a torch style light the beam is a well defined spot, with a modest amount of side spill. On dark roads and unlit paths the main beam is just powerful enough to get by with but things tend to loom at you out of the darkness and I wouldn't fancy it on a proper back lane or a twisty descent. Lower settings are usable, but only on roads with a good surface or that you know well. Testing the various power levels on an unlit stretch of canal path I actually scared myself a few times as birds and rabbits appeared in front of me as if from nowhere.

This is an odd little light really, neither powerful enough for seriously dark lanes nor practical enough for commuting through the week. There's no side illumination and that runtime would start to vex me, even with the benefit of USB chargeability (with a pitch-black commute of around 30min I'd be charging it up pretty much every day). It might be useful as a supplementary helmet light, Lezyne don't supply it with a suitable mount as standard but there is one available. To be honest though on the road, you'd be better off spending a similar amount of money on a more dedicated commuter light or saving your pennies for a more powerful light with a better runtime.

Stylish, but not all that useful for anything but short commutes

Lezyne don't say, but it has two flashing settings, rather than the one that it's bigger brother the Power Drive has, so my guess would be that this is more in commuter lamp territory.

It's too easy to knock the light out of alignment when switching between settings.

A bigger capacity battery might help, but runtime is poor.

Just about adequate for slow rides on unlit roads, but no concessions to commuter friendliness.

Well made and stylish but tiny size compromises performance.

Lezyne are coy about what, exactly, it is for, but it's not powerful enough to be a good light for unlit roads and it's pretty poor as a commuter light.

Did you enjoy using the light? Not enough

Doesn't quite do anything well enough to earn a regular place on my handlebars.