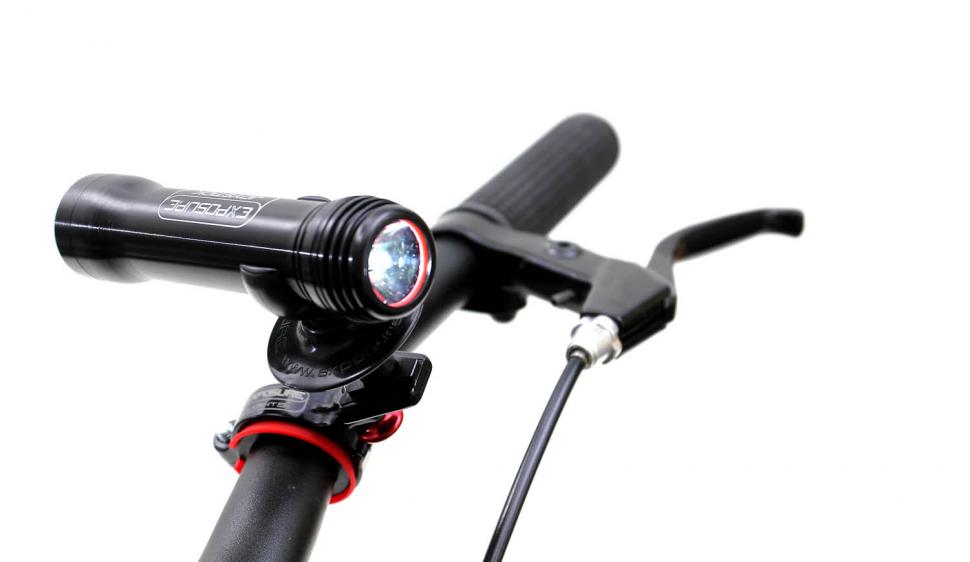 9
10
Not cheap, but packs a mighty punch
Weight:
103g
Contact:
www.exposurelights.com
How we test

Exposure's range of lights and the Joystick in particular have been the weapon of choice for spendy MAMILs for some years now. Combining light weight, high power and smart design Exposure's lights have pretty much defined the template for all-in-one lights.

I have to admit to being a bit wary of them. They are expensive and I wondered if they were popular because of their looks as much as their performance. Having spent some time with the Joystick Mk6, I'm converted. It's a small and elegant light that punches above its tiny weight. Still expensive mind you, but in a 'you get what you pay for' kind of way.

The Joystick is the baby of the pack, only the Spark is smaller. With a single Cree XPG R5 led it fires out 325 lumens, up from the 300 claimed for the old model. Exposure make a big deal of their collimated lens technology, which aims to ensure that the optimum amount of light is directed where it needs to go, rather than spilling out any old how. Designed primarily as a helmet mounted spot to complement a main beam flood, it has a very precise beam. Initially I wondered how good it would be used on its own as a commuting light but I needn't have worried. It was actually pretty good and only the very twistiest of lanes with branches poking out at head height would make me nervous. There's enough glow round the side of the spot to help you see but not so much that the light is wasted and the lack of light firing up at the tree tops means that oncoming traffic is unlikely to be annoyed.

By concentrating on the central spot, Exposure have maximised the light available from a relatively modest LED. That gives the Joystick an impressive runtime of 3 hours on full power and as much throw as the Lezyne Super Drive or the Moon XP 500, both of which have much more power and runtimes barely half that of the Joystick. It's a case of a light being expertly designed for a purpose, rather than being built up to provide flashy sounding numbers. All of us have slightly different criteria for judging lights and my personal thing is runtime. I don't like lights that keep me on the edge of my seat worrying if they have enough juice to get me home and I'm not fond of lights that force me to use inadequate power levels to eke out a ride. The Joystick wins on both counts, providing a very useful three hours on the top setting.

Our test light only came with a helmet mount (a cunning two part affair that sandwiches your helmet and provides a gimballed mount for the light to clip into) but as I don't wear a helmet I opted to tape the light to an old handlebar mount. Simple, but effective.

Charging is via a USB cable. The only slight niggle is that the cable isn't the bog standard type, rather it has a round pin at the light end. It's not a huge problem, it just means that you don't have the convenience of using any old USB cable if you don't happen to have the correct one to hand.

Control of the light is via a tiny illuminated rubberised button on the back which also doubles as a power warning. A double press launches the light in full power mode, a single press cycles through the three steady settings and a long press gives you a pulse/flash. Keeping the button down turns the light off, sensibly removing it from the main cycle. Partial shielding of the rear and sharing space with the charging port means that the button can be tricky to accurately locate with winter gloves on or if you happen to have fingers like a pound of sausages. Like the cable issue, it's not a big deal, just an observation, although I was using the light on a bar mount rather than perched on top of my head.

Overall I liked this light more than I expected to. It's an almost perfect marriage of function and form and even the price tag seems less of an issue when you consider the build quality and performance.

Not cheap, but packs a mighty punch

Oddly Exposure give their other lights a big windup, but there's nothing on the Joystick except for the technical stuff. Pity, it deserves some proper blurb.

Loads of tech. Exposure do like their acronyms and marketing buzz-phrases! We have:-

Emitter: The Joystick uses one Cree XPG R5 LED. The Cree XPG R5 is a more refined, higher quality LED of the same type used in the 2011 range. It keeps the same great beam patterns and colour temperature but the light has an additional 7-10% output over last year's models. We are quoting 325 lumens per LED rather than the 300 in 2011. We have also continued to work on the optics so in lights such as the Joystick there is a greater improvement than seen in the quoted increase.

Collimated Lens Technology: Exposure Lights use collimated Lens technology. These high-tech resin lenses are specifically designed to optimise light collection from each LED. A great deal of time is invested in research to ensure the optimal beam and output is achieved.

New patented technology that combats the loss in efficiency of LEDs at elevated temperatures, maintaining optimum output keeping you shining 'Brighter for Longer'.

Patented technology that enables a wide range of accessories to run from the power of the light.

The charge port is now gold plated for more efficient conductivity and it is sealed to a greater level.

The Smart Port now has a silicone cover to stop muddy gloves pushing dirt into the port.

Control button is fiddly to use.

I'll confess that I didn't actually use it. The clamp has a top and a bottom and I'd been sent two tops. Not only that, it's helmet only and I don't wear one. Everyone else seems to get on fine with the clamp, so I've played safe and given it a 7.

The case is completely sealed and the charging port has a stury rubber cover.

Given the amount of usable light, three hours on full power is very good.

More punchy that I expected. More than just a supplentary spot light for our muddy chums, it's a cracking commuter light for us roadies.

I still think that it's a pricey light, but you can see where the money has gone and the performance justifies the cost.

I'd argue that it's designed purpose is on the helmet of an off-roader bombing down trails, but it works very well as a road light.

Not just a fashion accessory for well heeled MAMILs.