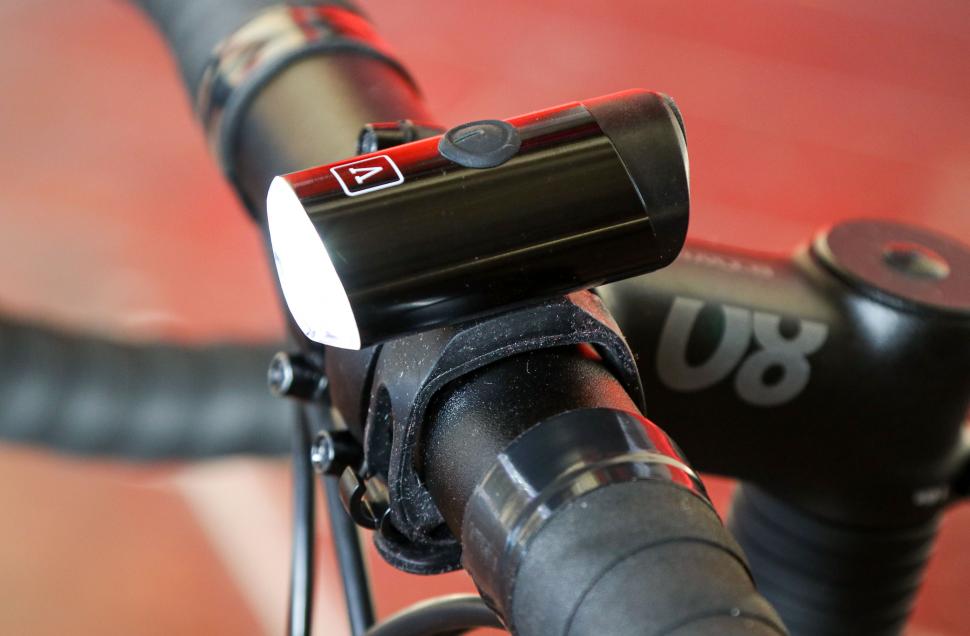 The Vel 300 Lumen Front Light is as efficient and effective as its no-nonsense name suggests. It's bright with strong side-visibility, battery life is good for commuting or proper training efforts, and the build is strong and light. It flickers oddly at low charge, and you may not have a wall charger that meets its very low amperage requirements.

I only realised at the end of this test that the impressive sub-45-minute charge time – for a minimum 2-hour run-time – was courtesy of an overpowered charger. I thought (wrongly) that the 5V QC1.0 charger plugs specified in the comprehensive instructions were 1amp. My fault – it actually says elsewhere it's 0.5amp, and charging takes 2 hours. Higher currents could damage the built-in lithium-ion battery.

Trouble is, QC1.0 is old – the more powerful QC2.0 standard arrived in 2015 – so unless your phone or associated 'adaptive' wall chargers are older than that, you're unlikely to have anything suitable. Worse, info seems scarce on chargers themselves, and most of mine had far higher 5V outputs than 1amp anyway. Long story short: you may need to stick to charging the Vel 300 from a computer USB port.

The body of the Vel is aluminium, with the tough plastic rear housing a thick rubber plug to waterproof the charging port. This unit's rated to IPX5, which means it can withstand everything from puddle splashes to sustained hosing, if not actual immersion. The Vel had no problem with ludicrous amounts of rain during the test.

The single button on top is rubber-covered too, but still displays the battery status via a simple three-colour light. It's easy to see at a glance, even in bright sunlight, and the button's easy to use in gloves. A quick stab lights up the charge indicator, while a long press turns the lamp on.

On the most power-thirsty mode (200-lumen high beam) I generally got around 30 minutes before it switched from green to amber, then a further hour before it turned red at 25 per cent left. The final stage lasted a decent 40 minutes before the Vel shut down completely. That's a useful run-time for a 50-odd gram unit, and only extends when using one of the four other modes. It remembers which mode you used last, too, so long as you don't run it entirely flat (it defaults then to low beam).

There are two other constant modes – a 100-lumen mid and a 50-lumen low – meaning the only actual 300-lumen setting is a flashing one. That's 'day flash,' but as well as being brighter than high beam, it lasts longer at a claimed 3.5 hours. That's likely to be accurate considering the other claims are, though I didn't test an entire burn as I find flashing front lights seriously distracting.

I do, at least, when they're this good at flinging light upwards and to the sides. The chunky plastic lens wraps around to meet the body, leaving it easy to check you've switched it on with a glance at the top rim (although the power meter will tell you the same), and throwing quite tightly focused beams out to the sides.

The sidelights are great for visibility as you pass junctions, although if your hands are on the tops of a dropped bar you'll be blocking the light's path.

The rubber strap is a good length, and wrapping it to your bar to the robust plastic hook takes seconds. The light spins on its mounting point, too, and though it rotates easily I never had unwanted movement once it was set, even on very rough, flood-scarred roads. It spins to allow mounting on a helmet, which is a neat touch, though it's useful for adjusting it for oncoming traffic too.

> The stuff they never tell you about bike lights…

The only issue I had was with the light intermittently fluttering; switching on and off rapidly for a second, before stabilising again. It only seemed an issue when the battery was into the red (25 per cent or less charge), and didn't really affect the usefulness of the light, but it's a little disconcerting. The problem disappears with a full charge.

You're hardly short of choice at this price, so competition is fierce. The Moon Meteor is £5 cheaper than the Vel's RRP (currently reduced to £27) while being more powerful at 500 lumens, though it's heavier, fiddlier and has shorter run-times. The Lezyne KTV Drive 200 and Giant Recon HL100 are also £25, though significantly less powerful, while Lezyne's Mini Drive 400XL is £30 and brighter... but heavier, and burns out quicker.

The Vel 300 holds a useful place at this price, then, with its quality waterproof build, usable run-times and basics-done-smartly design. Tepid charging and – at least with our example – an odd flickering at low charge aside, it's a really tidy little light at a tidy price.​

It's a commuting and road riding light that's bright enough for daytime visibility.

Couldn't be simpler. Quick and secure.

Runs for two hours at full power, and takes as long to recharge – be careful your wall-charger doesn't overcharge it, though.

Bright with a good side-splash and an easily monitored battery life.

Negligible for its performance.

Not the cheapest, but scores higher than some rivals on weight and run-times. It's well built and designed, and totally worth it.

Very easy to use, feels well made and lasts well on a charge.

Develops a flicker at low charge, plus there's no steady 300-lumen mode.

It's at the lower end for a quality USB light, and currently reduced to £27.

The Vel 300 looks simple and is simple to use, which could fool you into thinking it's basic. Take a look at the competition and you quickly realise that simple, effective designs can be the hardest... this light gets almost everything right for looks, performance and ease of use, and is an eight. Simple.