8
10
Well-designed and well-thought-out front light that works in loads of weather conditions
Weight:
207g
Contact:
www.raleigh.co.uk
How we test

The Moon Meteor Storm Dual Front Light cleverly gives you the option of three different beam colours to adapt to different weather conditions. It backs that up with great build quality, reliability and good battery life at a decent price.

Bright white LEDs trump the older yellowish halogen bulbs pretty much everywhere except when it is foggy. Even on their lowest settings all you end up with is a load of glare as it lights up the cloud in front of you rather than the road.

Admittedly, we don't get a huge amount of fog in the UK but when we do it can hang around a fair bit and for quite a few days in a row. I can remember commuting a few years back and for four consecutive days I was riding the 17 miles each way in the dark with a blanket fog for company; it was hard work.

After waiting a few weeks of the test period, I finally woke up to a foggy dark morning with very poor visibility...

The Meteor has two LEDs. One is a 'warm white' (3000K) on the Kelvin Scale of measuring colour temperature, which is basically quite yellowish, while the other is 'cool white' sitting at around 6500K.

The former is for use in the fog and heavy rain to reduce glare, and it works very well indeed.

Riding on those foggy mornings, not having a wall of white light rebounding back at me made it much easier on the eyes, much less straining. Overall visibility in terms of distance isn't changed, but you can see a lot more of the road that is available. On wet roads the reduced dazzle from the surface is much appreciated too.

For dry roads, Moon recommends using the cool white LED on its own, and it is pretty much like every other white LED in the bike light market where the colour gives plenty of clarity for picking up the edges of potholes and the like when travelling at speed. 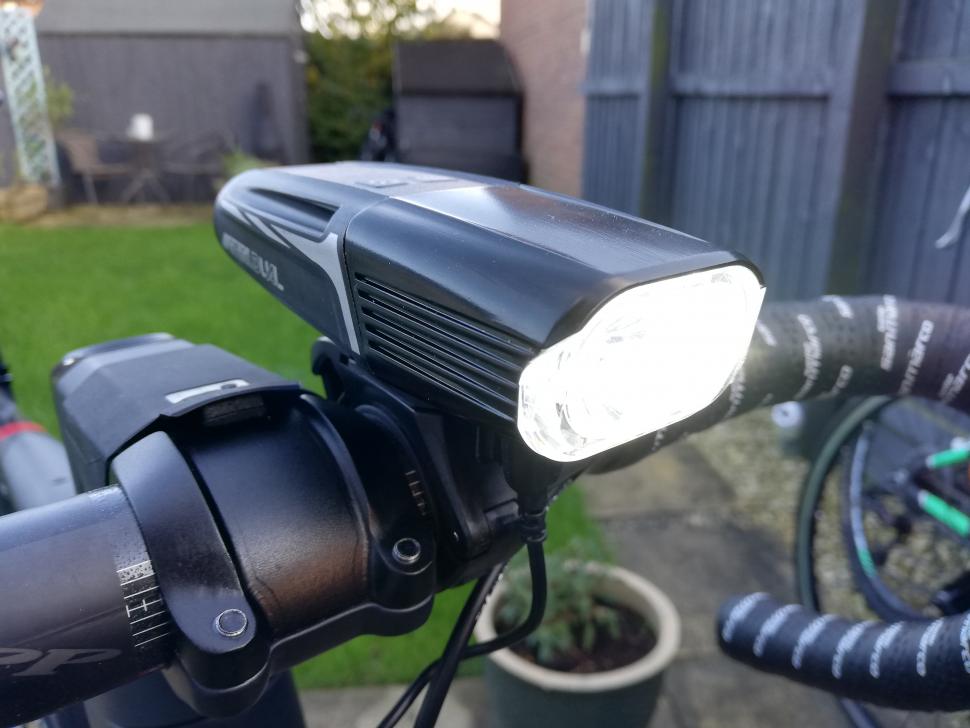 The beam pattern isn't road-specific, but it works well with quite a pronounced spot in the centre fading out to the sides which picks up the verges on either side of the road when out on the country lanes.

When conditions are changeable, or you just want more light than just the 800 lumen achievable by each LED individually, you can use both LEDs together.

This might sound like a lot of faffing, but swapping LEDs and modes is very simple – even on the fly. There are just two buttons on the Meteor Storm Dual, and pressing the one on the left, the VLS button, switches through the different LED setups.

When it comes to modes there are three steady ones for each LED option: Mode 1, Mode 2 and Boost.

You aren't locked into those modes, though, as the outputs in Mode 1 and Mode 2 are fully customisable by pressing and holding the VLS button.

You could leave Mode 1 (both LEDs) at 800 lumens for use on dark lanes and increase Mode 2 to 400 lumens to use as a dipped mode, for instance. It's a clever option that can be used to achieve a good balance of output and battery life.

To toggle between Mode 1 and 2 you just press the on/off button or use the included wired remote control, and if you want the Boost mode you give it a double click to turn it on or off. 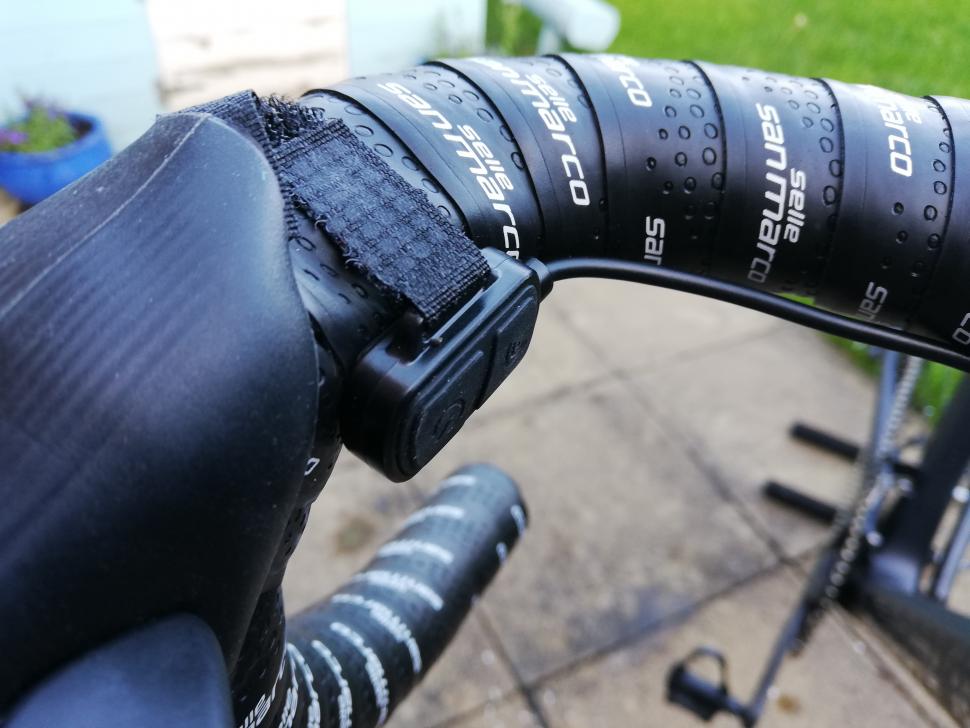 Now, my biggest bugbear with front lights is having to scroll through all of the modes to get back to full and having to go through flashing to get there. It's an absolute no-no when out on a pitch-black lane to have a 90s rave strobing away in front of you.

No such issues here, though. To enter the two flashing modes, you have to press and hold the on/off button for three seconds and do the same to go back to steady: perfect.

Battery life is good, and I often achieved in excess of all of the claimed burn times I tested by around 10%. You can follow progress of how much juice you have left by way of the matrix display, which also tells you what mode you are in.

It can all be a bit daunting to start with, but you soon get used to what all of the light patterns mean on the top of the light.

When it comes to weatherproofing, I also didn't have any issues. It's been pretty wet of late and I've been caught out in many torrential downpours.

The USB-C charging point is well sealed by a rubber cover underneath, and kept the spray from a bathroom shower test at bay in line with its IP rating.

Also in the box is a handlebar bracket that holds the light securely, although it is on the bulky side with its large thumbwheel design which can be a bit of a faff when the cables are running close to the handlebar. 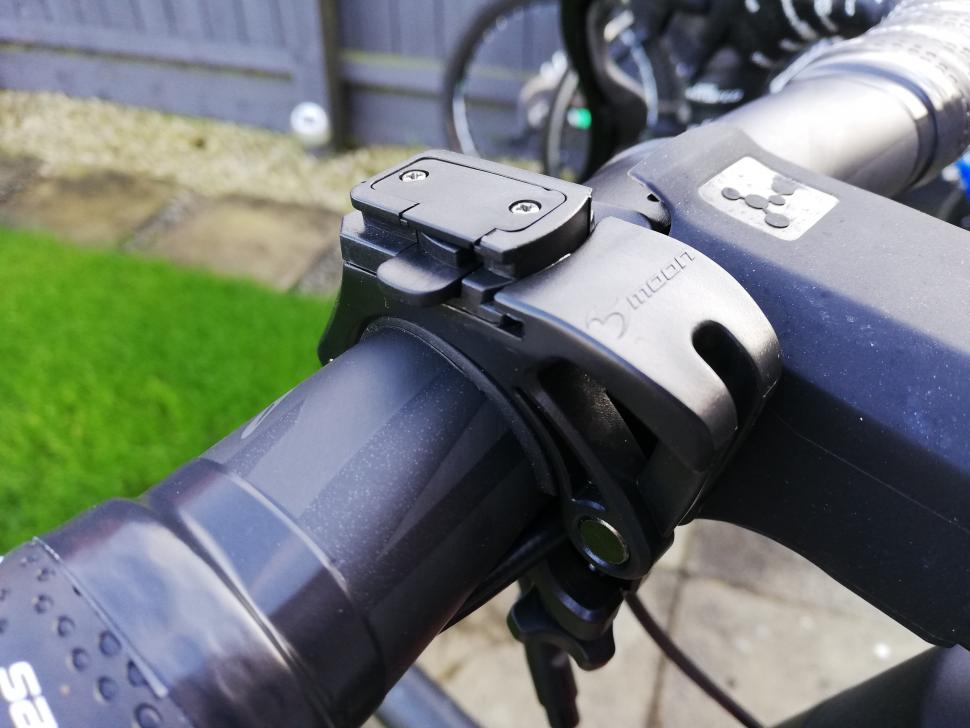 There is also a helmet mount included too.

For the quality of the build, the outputs and battery life, the Meteor Dual is a good option for money, in my eyes.

For maximum output on dry roads I did find using both LEDs wasn't quite as good as using a powerful light with just white LEDs, as the mix of the white and yellow just takes the edge off the sharpness of the beam, but it's a small price to pay for use in rubbish weather.

Similarly priced lights such as the Cateye AMPP 800 are shy on output compared to the Moon, and with the latter you are also getting longer burn times with an extra 500 lumens. The Cateye is a good light, though, with a slightly nicer beam pattern; I used the 1000-lumen version alongside the Moon and the review will be up soon.

On paper the Oxford Ultratorch 2K looks like a very good proposition – I mean, 2000 lumen for an extra tenner! In reality, though, the Oxford puts out nothing like that power, and the beam pattern, build quality and pretty much everything about the Moon surpasses that of the Oxford, which highlights what really good value the Meteor is.

Overall, the Meteor Storm Dual is a very well thought out light, and the customisation of the outputs is a massive plus. For the money it is very easy to recommend.

"The warm white passes through fog

"Improve your visibility in a foggy day"

It's more than just a light for use in poor conditions though. It is a very good light with loads of options.

Battery life is brilliant, beating all of the quoted burn times and it recharged quickly.

Very well thought out. It's easy to use and offers plenty of output options.

The mixture of power outputs versus battery life.

Bulky bracket can be tricky to fit if your cables run close to the handlebar.

This £80-£100 range is a very busy place in the market but the Meteor stands up well against the likes of Cateye, ETC, Knog and others when it comes to beam pattern, usability and battery life.

The Moon Meteor Storm Dual is a really decent light offering good burn times, good outputs and great user-friendliness. The fact that it comes in at under £100 is also a bonus.