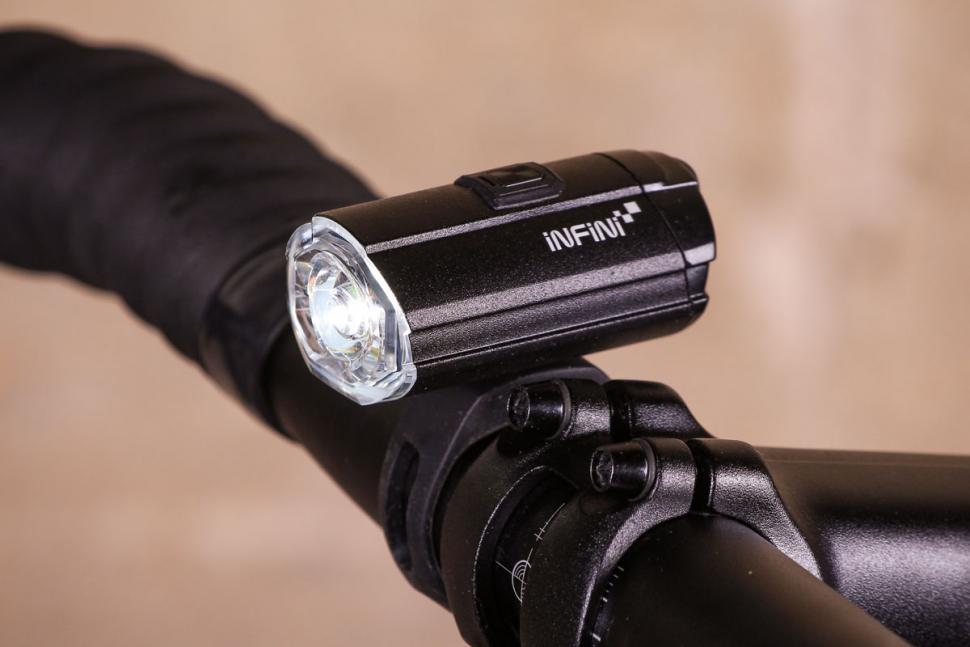 The lightweight Infini Tron 300 is a neat little headlight with handy versatility from bar to helmet. It has a waterproof casing and a snug charging port so you can trust it not to conk out on you. Its beam, though, is somewhat narrow, and one of its main advantages might just be its drawback – a nifty 360-degree pivot with a mind of its own.

With five settings, from pulse to constant, the Tron 300 is a Taiwanese-made front bike light to take you from day to night, measuring a tidy 27 x 32 x 25mm. Its two pulsating flash options – one regular and the other a bit like an excited puppy – alongside three constant beam options of varying brightness provide enough settings to get you through your commute without mode overload. When you find your favourite, the Tron 300 lets you save it with its 'mode memory' – accessible via a three-second-long press of the button. You can set your preferred maximum brightness, too.

Getting the Tron 300 ready for use was incredibly simple, bar one frustrating niggle – the charging port is deep-set, nestled inside the unit behind a (more sturdy than some) rubber bung. While this makes it wonderfully rainproof, it also means that Micro-USBs with even a marginally larger cable end won't get into the port. Luckily, it comes with its own cable provided – but it's one to watch when that cable gets mixed up with your multiple other, otherwise identical, charging cables. Once on charge, it takes 2.5 hours to get to full capacity.

The pop-it-on capability of the Tron 300 seemed a bit too good to be true, with a rubber strap seemingly allowing for super-speedy mounting and accommodation of different bar widths. However, the unit would then ping off the bar at a moment's notice. Upon closer examination of the instructions, I was able to fix it properly, and far more firmly, using both ends of a small double-ended hook through two rubber holes, with some fiddling. The upshot is that fixing is fiddlier than it may at first seem, but sturdy and versatile once you've got the hang of it.

Helmet-mounting capability is a bonus – if you swivel the light 45 degrees on its rotatable bracket, the strap can be fastened laterally.

Once you're up and running, the unit offers a handy traffic-light system to tell you where the battery's life is at so you don't get caught short. You can use this information to check how much juice you have left, or see when you're good-to-go on charge mode. On test, our charging indicator went from zero to orange (not far from hero) in less than 20 minutes. Orange provides a minimum of 2 hours on pulse or on its lowest constant setting... enough to make it home.

Tron in action is a bright little number. The 3W LED is in Infini's headlight, rather than front light, product range, so it's positioning this as a standalone light to see and be seen. Out on the road at night, spot-brightness is evident, but beam width falls short – road signs remain in the dark, unilluminated. Despite how it appears on our beam comparison engine (see below), the Tron's point-focused illumination is a little brighter in action at night than the Kryptonite Street F-300. The Tron appears not less powerful, but its power is centre-focused.

If there's something in your peripheral vision that you particularly want to illuminate, though, Tron makes it easy with a fancy 360-degree-rotatable bracket. The nimble freedom of its lateral position (up and down is fixed) is handy, but lumps and bumps in the road showed that Tron's rotation can have a mind of its own – it moves easily on its rubber pivot, so there's not much to hold it in place.

With around 2 hours on its Super Bright mode, it won't get you through a night audax, but run-time is adequate for most commutes, with both pulse and constant mode delivering a maximum 8 hours in total.

In fact, it lasted more than the claimed 2 hours on full – with no evidence of conking out until 2 hours 14 minutes. However, the beam went from constant to introducing a flicker every 30 seconds after being on full beam 98 minutes. So, the downside is that this 2-hour claim isn't strictly true, but on the bright side, the flashing isn't particularly interruptive, and illumination lasts a bit longer than advertised.

> Buyer's Guide: Check out our beam comparison engine and the best front lights for cycling

It also outlasts some other 300-lumen lights in its price range – Kryptonite's Street F-300, for example, purportedly lasts 90 minutes – but on the flip side, its 8-hour max time is a lot shorter than others out there too – including the F-300, which boasts up to 24 hours.

With its snug USB port, rubberised buttons and durable alloy casing, it's no surprise that the Tron 300 performed well in the rain. There were no signs of water damage even after a particularly grizzly winter commute, and the chunky rubber button is a friend to cold thumbs, too.

'With infinite vision, you can light up your world,' says Infini, but even the 360-degree-spinning prowess of this model doesn't quite make up for what's lost in peripheral illumination and reliable positioning. For a weatherproof front light that feels both reliable and compact, though, it's a nice option.

From the Freewheel website: "300 lumens of bright light in a very compact package"

With 300 lumens on full, and five settings to choose from, the Infini Tron 300 is a front light designed to take you from day to night on the road. The 3W LED is in Infini's headlight (rather than front light) product range, so it's positioning this as a standalone front lamp to see and be seen. While its compact feel, reliable weather-resistant alloy casing and handy USB charging does make it a good companion for a go-to light, the narrow beam width lets it down in the dark.

The Tron 300 offers five simple settings including a daytime flash mode. It also boasts 'innovative user-programmability' which means that you can set your preferred maximum brightness to suit your riding while maximising the battery life.

Push button switch operation is easy to operate, even with winter gloves

It has a very good overall feel.

The large rubber button is handy for cold hands.

The little hook that accompanies the rubber strap is somewhat fiddly, but the light is secure once in place. The rubber pivot enables it to be moved around at an angle to suit. And the strap makes for versatility, from handlebar to helmet.

The lamp is claimed to be resistant to water splashes, and there were no signs of damage after several rides in the rain.

The light lasted 14 minutes longer than its advertised 2 hours on the highest setting, but introduced an intermittent flash well before the 2-hour mark. The lower settings were as advertised, 8 hours.

USB charging makes simple work of keeping it ready to go (charge to full capacity takes 2.5 hours) but only Micro-USBs with smaller cable ends fit into the port. The product comes with a charging cable, though.

Despite how it appears on the beam comparison engine, its spot brightness was decent on test. While it was far narrower than another 300 at a similar price, the Kryptonite Street F-300, it provided more illuminated detail at the centre point.

The light does move easily on its pivot, so I found myself having to move it back to where I wanted it when it jumped out of position.

This light can take a fair amount of rain, daily use... and abuse. It suffered a few blows when it kept pinging off onto the pavement before I fixed it firmly (read, properly) with the tiny hook system. Bar a couple of scratches to the casing, there are no signs of damage.

It's a nimble little number. Not the lightest, but not slowing me down, either.

Once in place (it's not the simplest to mount until you get the hang of it) it provided reliable illumination day and night, and decent spot visibility. It helped me to be seen on commutes, and it was easy to transfer to my helmet. There were two key drawbacks though: I was frustrated by having to nudge it back into place when it moved on its pivot, and I couldn't see road signs at night.

The compact, pop-it-in-your-pocket feel of the unit, and the diversity of mounting options.

Lack of illumination width, and the pivot, which meant it wasn't fixed enough.

The price is on a par with the Kryptonite Street F-300 (£35.99), which provided greater peripheral illumination but had a shorter run-time on its highest setting, and it's £2 more than the Blackburn DayBlazer 400.

Would you consider buying the light? Yes, as an additional or back-up light.

Would you recommend the light to a friend? Not as a main front light.

I wanted to recommend this light – there's a lot that's very good about it: it feels great, it's compact, robust, won't break the bank and offers good features. Unfortunately, wider illumination and a firmer fixed position are important too, so it lost points here.