8
10
Impressive light, though 1700 lumens might be overkill for some road riders
Weight:
273g
Contact:
www.zyrofisher.co.uk
How we test

The Cateye Volt 1700 is a super-potent compact front light with enough punch for scorching along the darkest lanes. Several intelligent settings with generous run-times ensure that it's practical for semi-rural and town work too. However, while I have quickly warmed to its charms, there are others out there that offer similar bang for less buck.

It offers five modes in total – three steady, two flashing – all of which are well thought out and should cater for most people, most of the time. High is 1700 lumens, medium 500 and low 200 – which is tame enough for town. Hyper constant is a hybrid of a 200-lumen steady and 1700 flash, and lastly there's a 200-lumen flash. The light has a memory function, so will turn on in the last mode used.

Unleashing the full 1700 lumens provides a very rich, ambient light, which gives as much navigational punch as you could want along pitch black lanes – enough for 42mph, anyway, which is my limit for a local descent.

It's potent enough to persuade the most ignorant of full beam drivers to dip, and so long as I've angled the light properly, I've not dazzled or had anyone flash their lights at me. Along my favourite winding lanes, approaching traffic typically dipped their lights at 80 metres or so on clear nights – half that when mist presented. 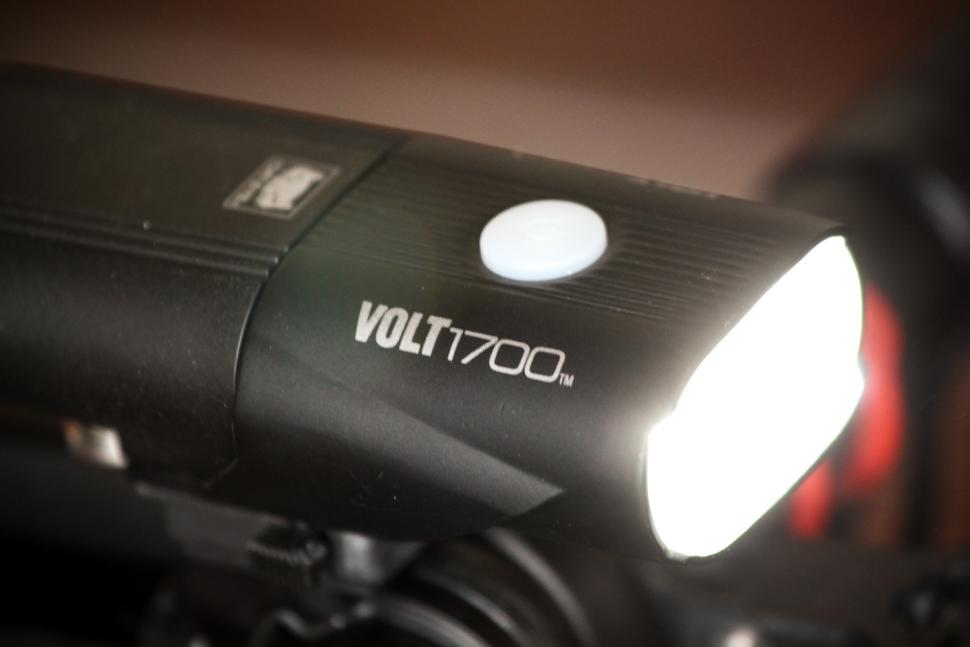 For serious trail antics, I'd be inclined to pair it with a helmet-mounted flood. However, green lanes and less technical dirt roads/trails were easily navigated at a steady 17mph, and 23-25mph was also doable along clearer sections. Rabbits and other woodland creatures caught in its arc also dispersed promptly.

I was pleasantly surprised to note that the battery life indicator light was still clear after 50 minutes. Given the 2-hour run-time, I was expecting it to have slipped into amber. This took a further 20 minutes, and cruising to red I was confident of getting the full 2 hours, which I did (2hrs 3mins to be precise).

Medium is just about bold enough for reasonably brisk, semi-rural contexts. Again, there's been no problem with being seen by other vehicles, although in this mode I felt the benefits of improved peripheral spread, particularly when negotiating busy unlit side roads and junctions.

Low stirred a bit of unexpected debate, with some acquaintances reasoning – not without justification – that 200 lumens was a bit overkill for well-lit city centres. However, it's a decent, frugal default, which seems optimal for suburban stuff.

Again, give a minute or so either side, I've had the 15 hours cited – sufficient for a fortnight's commuting, possibly longer. 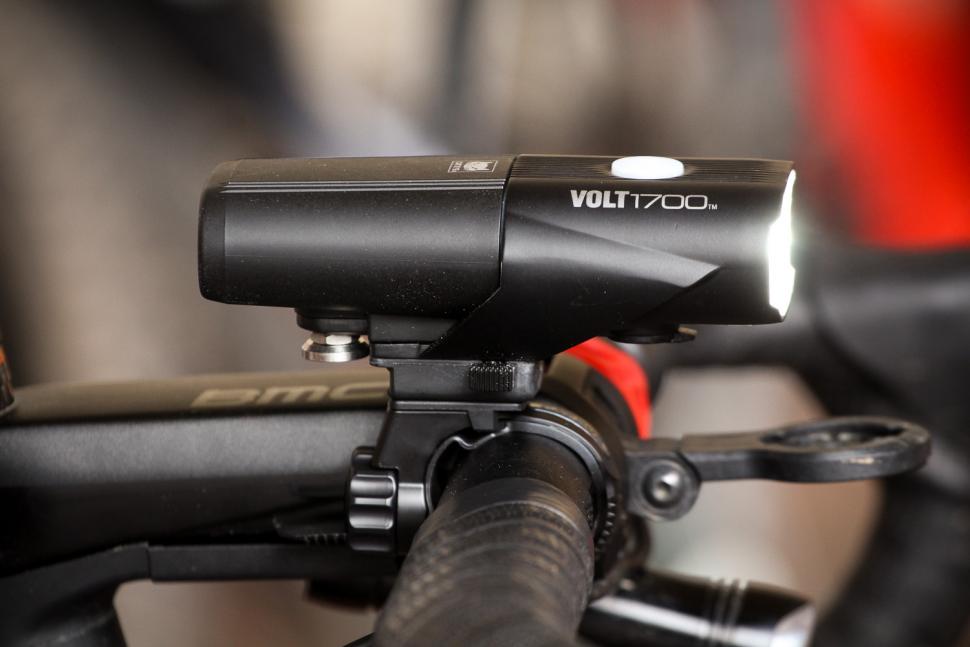 I have to say, though, I've found hyper constant that bit more effective, especially at roundabouts and other sections, where the flashing diode really commands attention – even, dare I say, restraint, judging by some otherwise eager driver's reactions. It's also rather useful on misty, murky mornings where lights aren't necessary in the navigational sense but you need to remain firmly on the radar.

Although no problem in faster flowing traffic, it's a little harsh at close quarters, so I've tended to toggle down to the 200-lumen flashing mode in those circumstances.

This, aside from being extremely economical – I've come nowhere near to testing the 150 hours cited run-time – makes a passable daylight flash. It's adequate for scooting to work in the morning without putting a dent in reserves should you wish to blow off some steam afterwards. As a limp-home option, friends suggest it's visible at around 100 metres, slightly further on a clear night.

What's behind all this performance then? Up front we have two Chip On Board LEDS projected through the Opticube lens and reflector, which create a very pure arc of light. I was assured peripheral prowess was much better than the Volt 1600 and this did appear to be the case.

The casing is a neatly executed mix of CNC machined aluminium and high quality composites. Aside from durability, the former serves as a heat-sink, theoretically preventing diodes, circuitry and switchgear from becoming overly hot. It also sports a 'caution hot' sticker, but in practice, though it's become warm even the highest setting when run for 90 minutes or so didn't induce singed digits. 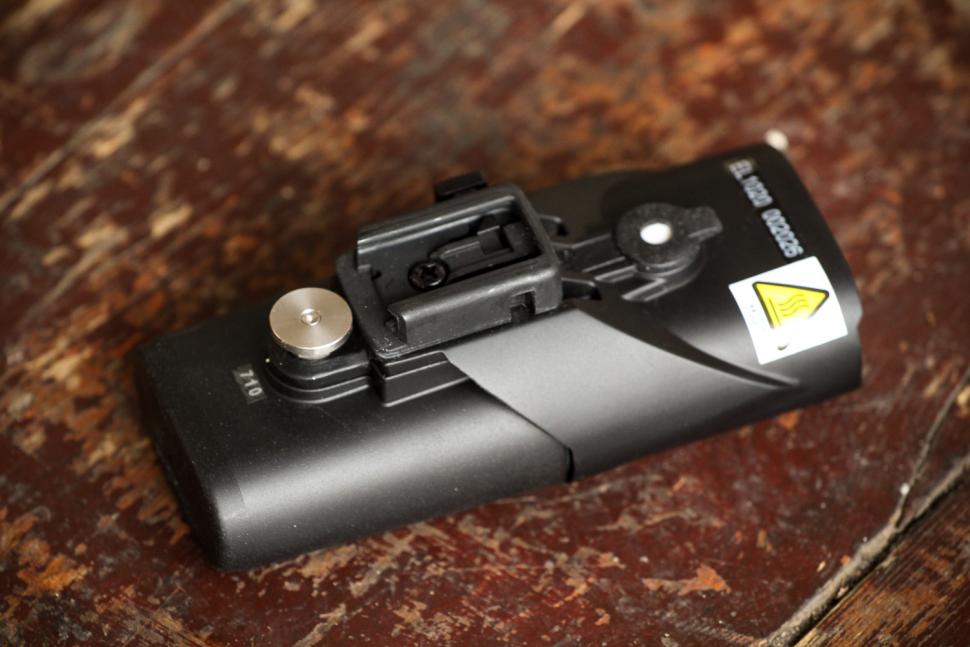 Another neat feature is the removable Li-ion cell, which presents the option of carrying a replacement, for extended nocturnal runs, say.

The Volt 1700 is reassuringly well sealed from the elements too – I've given ours a decent point-blank-range three-minute blast from my garden hose with no obvious signs of ingress. The charge port plug is also deeply recessed and an extremely snug fit, though easy enough to prise free for charging.

Charging is via a sensible-length micro-USB cable, and in keeping with competitors takes 5 hours from the mains when fully depleted.

When charging, the switch-cum-charge indicator flashes red when you're somewhere between empty and 50%; amber is 50% plus, and green denotes fully charged.

The switch itself is a huge centre-mounted affair, slightly squidgy and easily commanded in winter-weight, full-finger gloves. It's positive enough that it doesn't accidentally engage in pockets or luggage.

It gives a pretty accurate gauge of your reserves when the light's on. Clear means 100-50%, whereupon you'll get amber; turning red says you've got 30-16% and flashing means you're down to 15% and should staircase downwards. It's probably the most intuitive of all the master blaster torch types I've tested to date.

This is Cateye's familiar 'Flextight' thumbwheel type bracket, reckoned compatible with everything from 22-32mm diameters. I've had no problems with 31.8, 26.2, 26.0 and 25.4mm. It's a bit of a love/hate design and one I've not been overly endeared to previously, but this version seems really quick, easy to use and, most importantly, very secure. 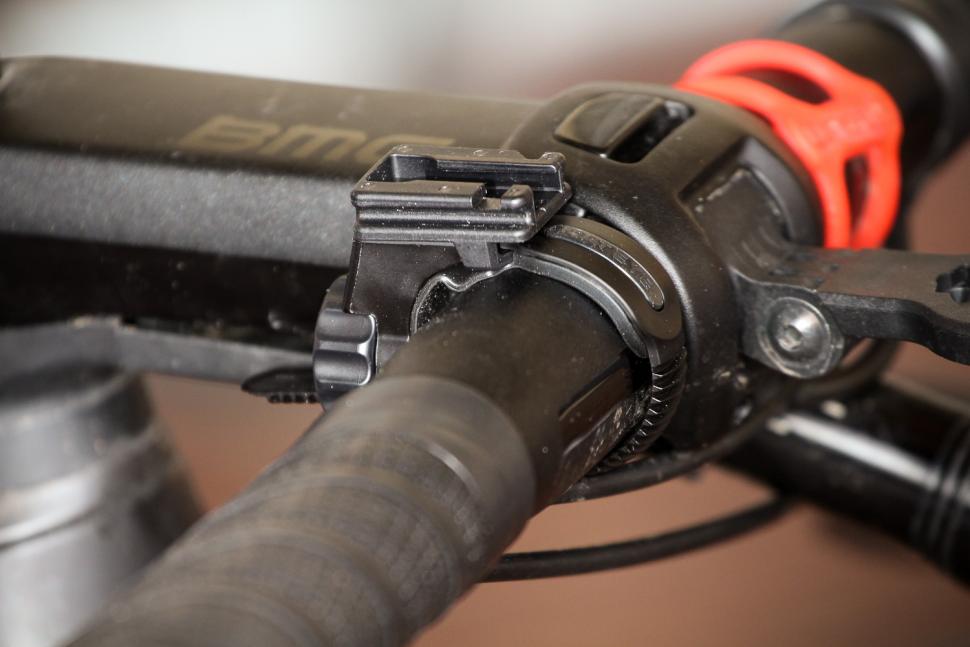 Ultimately, I've really enjoyed using the Volt 1700 and it represents an excellent option for those wanting a very powerful light without the encumbrance of external battery packs. The ability to extend rides with aftermarket batteries is another plus.

By the same token, unless you are looking to tackle the darkest roads or trails at warp speed, there are slightly less powerful but still practical options with smaller price tags, such as Moon's Meteor Storm Pro for £124.99, Ravemen's PR1200 USB Rechargeable DuaLens Front Light for £99.99, or Cygolite's Metro Pro 1100 for £99.95.

Impressive light, though 1700 lumens might be overkill for some road riders

Cateye says: "The Volt 1700 is CatEye's most user-friendly, high powered rechargeable light, offering enhanced light distribution on or off the beaten track.

"Not only does it pump out an extra 100 Lm over the Volt 1600, it also benefits from side visibility, a tool-free replaceable cartridge battery, a 3 level battery indicator and a significantly shorter recharging time.

My feelings are that it's a capable and charming big light with sensible modes and run-times but I'm not sure it's better than several competitors around £20 cheaper.

* Large mode button for ease of use when wearing gloves

Robust and well engineered throughout.

A very simple, intuitive switch-cum-battery life indicator. Absolute doddle to operate in gloved hands. Modes are also very sensible, so something of a social chameleon, with decent town manners too.

Clamp and bracket seem very reliable and have accommodated bar/extension brackets between 31.8 and 25.4mm. Clutch type quick release is a bit fiddly in winter weight gloves, but I tend to take mounts an' all with me when parking in the street.

No problems in wet, gritty conditions and it has also withstood my garden hose test with flying colours. That said, nothing less than I'd expect from this price point.

Charge times are faithful to those cited and competitive with others offering similar outputs. Requires a good five hours mains charging when fully depleted. However, the removable battery offers scope for carrying spares/extending ride times.

Excellent overall, in every setting. To my surprise, the casing hasn't become unduly warm – even regularly run at full output for 90 minutes or so.

Not bad value, but facing stiff competition from units such as Moon's Meteor Storm Pro.

Overall, the Volt 1700 has proven every bit as capable through town as it is along the darkest lanes. Switching between modes, say when transitioning between rural to semi-suburban settings, is a doddle thanks to the intuitively positioned and responsive switch.

Nothing given the design brief, although at full rrp its additional power may not be enough to justify the additional expense for some riders.

Would you consider buying the light? Certainly on my shortlist but not at full rrp.

Would you recommend the light to a friend? Well worth a look if they wanted a versatile light for most riding contexts.

It's a very solid and capable light, if a touch pricey for some tastes. Despite that, I still think it warrants an 8 overall. It's very good.