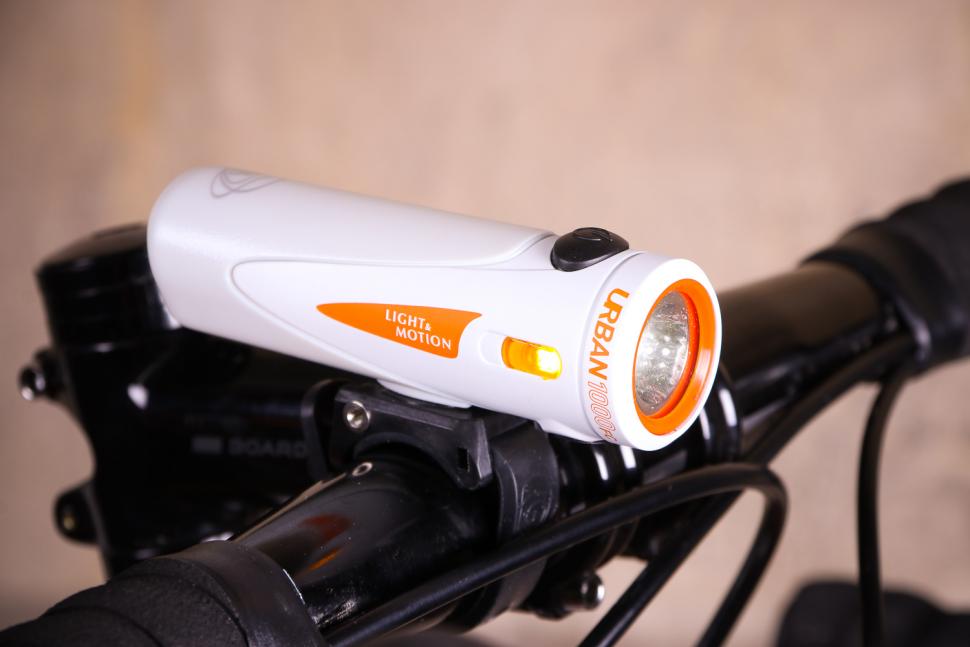 The Light & Motion Urban 1000 Fast Charge is super-compact and powerful, and has plenty of standout features to make it superior to many lights with around the same power output. It is expensive, though, and there are few cases where you'd need this instead of L&M's slightly less powerful Urban 800 light.

With a solid yet feathery aluminium body, weighing a mere 122g for the light and mount, and with 1,000 lumens on the brightest setting, this is the highest power-to-weight ratio I've come across in a headlight.

Operation is simple, with a double-tap allowing you to access four beam settings: high (1,000 lumens, 1.5 hours), medium (500lu, 3hrs), low (250lu, 6hrs) and pulse (250lu, 12hrs). In my experience you get slightly more than 1.5 hours on high, and toggling between this and the pulse mode when someone was coming the other way on my partly-unlit cycle path commute, I easily got over three hours out of it.

There's also a 'race mode', accessible by holding down the button when switching on, which allows you to toggle just between high and medium.

The button is big and responsive so you don't miss a click, and with a maximum of four settings to toggle between, you're never far away from which one you want.

Charge time is claimed to be 2.5 hours via the micro-USB cable supplied, and using a 2A adapter I found this to be accurate. There's a small indicator light at the back, which is green when you've got plenty of power left and changes to red to notify you that you're running low.

This light didn't appear in our 2017 beam test but I've also been testing the Lezyne 1100XL over the winter (full review to come). I found the latter to be a fair bit brighter, more so than the extra 100 lumens claimed would suggest. The Light & Motion has much more of a focus to its beam, though, rather than just pumping out raw power. It has a pleasing curved shape that gives decent peripheral and lights up a good few metres of road ahead of you.

How bright is too bright?

My commute is possibly more unusual than many in that it involves two short city centre dashes at either end of around 15 miles of cycle path. The path section, which is fairly peaceful but guaranteed to have plenty of riders passing the opposite way, really allows me to get a sense of how others react to my beam. With my light dipped down slightly, I first tried the ride toggling between medium and high, then switching down to pulse (the same brightness as the low setting, 250 lumens) when someone was coming the other way.

I got one complainant out of around 100 who passed, and although other people I've asked claimed it wasn't dazzling, even one moan is too many in my book.

If you want to ride courteously you've really no option but to partially cover the light with your hand or push it right down to ensure you don't dazzle anyone, which is a bit of a pain if the path involves sketchy tarmac or potholes where you need both hands on the bar.

I'd expect a light of this price to have an economy setting low enough that you can be safe in the knowledge that it doesn't dazzle. Light & Motion does recommend this as a backup trail light, too, but I'd want it to cover all options for £120.

For full urban use, the pulse mode is perfect. The two orange-coloured side lights are also nice and bright, and give extra peace of mind when approaching a junction – without getting complacent, of course.

The mount is solid plastic with a rubber strap, which has numerous holes to fit any bar size or helmet. It's tight, but so it should be to hold your light securely. The light slots into the mount, and (this is very important) clicks in when it's inserted all the way. I say this because when I failed to fix it in fully my light went flying on Bristol's busy Gloucester Road. Of course this was totally my fault (I make the mistakes so you don't have to), but just make sure yours is fully clicked in.

When it did hit the deck the light suffered barely a scratch and is still in perfect working order, which goes to show how impressively tough the aluminium body is. Also included in the box is a GoPro mount that fixes to the underside of the main mount.

The Urban 1000 FC has an FL-1 certification depth rating for waterproofness. This voluntary standard also covers the brightness and impact resistance, and is basically a stringent set of guidelines created for flashlights so you know you're buying a quality product. In terms of waterproofing, Light and Motion don't say if it can stand up to being fully submerged for more than half an hour (obviously not essential), but 'waterproof to 1 meter for all conditions reliability' suggests it's based on at least an IPX7 waterproof rating. My light has stood up to everything our eccentric weather system has thrown at it over the last couple of months, so I've no doubt it's highly waterproof. The cover over the charge port is solid plastic with a rubber insert to click it into the gap, so there's nowhere here for any water ingress.

Though my thoughts on the Urban 1000 are mostly very positive, at £119.99 it's pricey, and there are a lot of lights with the same or more power for less money. Lezyne's Macro Drive 1100XL previously mentioned is just £70, and Cateye's brighter Volt 1200 is also £119.99. You get the side lighting, claimed faster charging and the light, compact design – but its Urban 800 model does all of this for less, and in an urban environment there are very few occasion where you will need 1000 lumens.

I would actually prefer to use the Urban 800 in the majority of cases, and I think most other cyclists would be better off with it too. The low beam setting is a less-dazzling 175 lumens, and 800 lumens is plenty bright enough for lanes, cycle paths at night and as a back-up trail light. This, and you can get it for under £100 now if you shop around.

I was certainly impressed with the Urban 1000, though. It's very compact, easy to use and should last a long time. My only criticisms are the lack of a lower economy setting for polite passing on unlit paths, and the price.

Super-light and super-bright commuting light, but it's expensive

The Urban 1000 Fast Charge is designed to "provide class-leading output and unmatched protective visibility both day and night". It has amber side lighting for increased visibility to traffic and a daylight pulse mode, that Light & Motion says makes this the most "visible, reliable, versatile headlight available". Integrated fast charge technology charges the light in 2.5 hours. It comes with helmet and GoPro mounts, and is also recommended as a backup bar light for mountain biking at night.

Light and compact with a solid body that's very resistant to damage, and a secure cover over the charge port to prevent any water ingress.

You have to double tap to access the four beam settings and then hold down for race mode (two settings), which is simple enough to get the hang of. The button is big and responsive so you don't miss a click.

Mounting and removing the light for charging is easy enough, but the quick-release is a bit stiff to get in and out of the mount. Attaching the mount to your handlebar is simple with a thick rubber strap.

Stood up to driving rain on numerous occasions.

It's called 'Fast Charge' and this appears to be true, taking a shade over 2 hours for a full charge. Battery life is as claimed, 1.5 hours on full (actually a little more from my experience), and up to 12 on economy.

Good beam pattern, nice and light, and looks good – although I'd like a lower economy beam setting.

On one occasion when the light went flying and hit the tarmac (totally my fault) it suffered barely a scratch, so it's impressively durable considering it's so light.

Probably one of the lightest lights you can buy with this much power.

There are a few standout features such as the side lights, fast charging and low weight to set it apart from other 1000-lumen lights that are cheaper, but the Urban 800 is better value.

It's great on busy roads in pulse mode, which is all you're going to need. On unlit roads/paths there's plenty of power, but the lowest setting is 250 lumens which will dazzle oncoming riders unless you partly cover it.

The beam shape is very impressive, giving a very clear and long-ranging view ahead with decent peripheral. The side lighting provides good peace of mind in town, too, being nice and bright.

The lowest setting is still too bright for passers-by at 250 lumens, it moves about a little when you hit rough tarmac/potholes, and it's expensive.

Did you enjoy using the light? Most of the time.

Would you consider buying the light? With a discount, yes.

Would you recommend the light to a friend? For someone with a very quiet and pitch dark commute, or an urban rider who rides on mostly well-maintained roads, yes.

It's a fine light with not a great deal to criticise other than the price, but could do with a lower low setting.