7
10
Versatile and very powerful light, but peripheral punch is good rather than great around town
Weight:
29g
Contact:
www.extrauk.co.uk
How we test

The Cygolite Hotrod 50 USB rear light is a super-sleek model that performs remarkably well in all conditions thanks to six intelligent settings and largely generous run-times.

The Hotrod looks very similar to Moon's Comet X Pro, and the specification isn't too far different from this and similar 'strip light' patterns. Only the fussiest of clutter-phobic riders could claim the Hotrod spoilt their bike's clean aesthetic – even when it's positioned on a pencil thin seatstay, let alone a 27.2mm seatpost.

Behind the composite lens, there are no fewer than 20 diodes sharing the same circuit board, protected by a thin aluminium heatsink and fuelled by a fit 'n' forget lithium-ion cell. This is reckoned good for 500 charge cycles before run-times are adversely affected.

COB (chips on board) technology is increasingly ubiquitous, and I'd expect nothing less from this price-point. Frankly, it's a winner all-round.

The Hotrod affixes to seatpost or stays via a sturdy rubberised strap, which achieves leech-like tenure around most surfaces and sizes. That said, some gentle pre-stretch was called for when fitting to an oversized 31.6mm model, although a root round in the bodge box confirmed others will work pretty convincingly. A clothing clip for bag loops would have been a nice touch but hardly a deal-breaker.

Cygolite doesn't cite an IPX rating, simply describing the Hotrod as water resistant. If you are regularly riding in foul weather and shunning mudguards, a quick lick of silicone grease on the port plug might be a wise move. Otherwise, there's been no problem on rainy rides; I've given it the odd provocative blast from the garden hose and left it in-situ during sudsy bucket washes.

This is a little button type on the right hand side, which is marginally easier to operate than the Moon Comet X Pro's and Cateye's Rapid X, especially in full-finger gloves. Nonetheless, it requires a definite two-second press, so unwanted engagements are going to be in blue moon territory. With a bit of practice, I was able to reach behind and staircase up/down to suit conditions, say when passing from sticks to suburbs.

Zero to hero fuel-ups take a full three hours from the mains, another 15-20 minutes from portable tech. That's loosely what I'd expect from models of similar capacity. I also like the low battery warning indicator, which sends a visual alert when turning on/off, greatly reducing the likelihood of being unexpectedly plunged into darkness.

These are broken down into day, day and night, and night specific, although judging by some very cold and murky mornings, all seem very conspicuous. As we'd expect at this end of the market, there's a memory function for press and go convenience.

Performance in all modes is genuinely impressive. Aside from Group and Low Flash, all the settings are quite visible during daylight (and foggy morning and evenings have been pretty consistent during the test period). 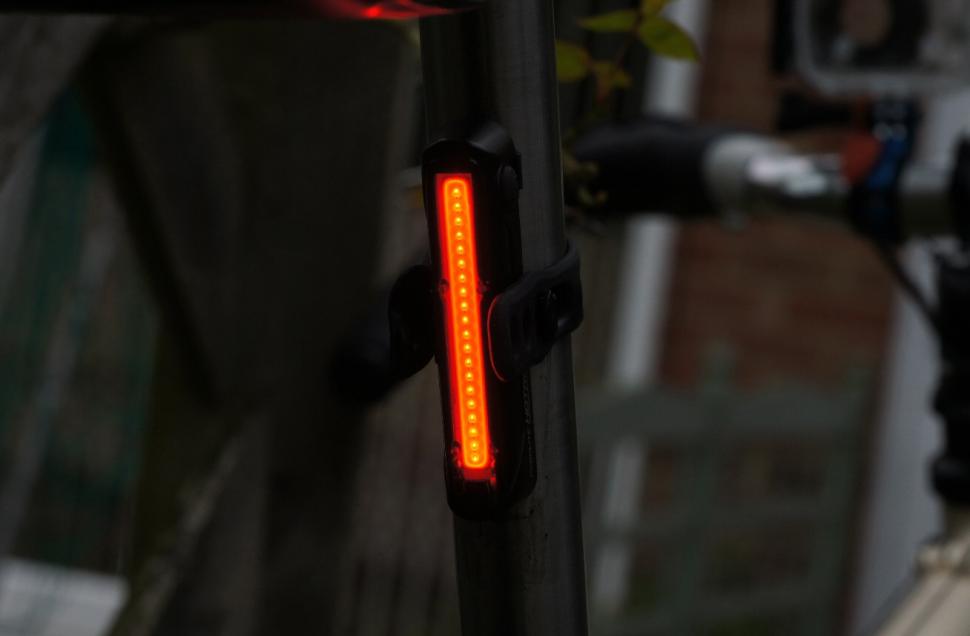 At 50 lumens this is less aggressive than the Comet X Pro, but, with the exception of really foggy days, more than bright enough for most conditions. It's a very bright red beacon – I've spotted other people's at a good 200 metres when driving along dual carriageways on grey mid-mornings. Run-times have been a consistent 3hrs 24mins, within 6 minutes of those quoted.

I was surprised to discover this is only 30 lumens – especially given the comparatively average if genuinely faithful 1hr 30min run-time. On misty nights and along unlit roads, other riders reckoned they could pick me out from 250 metres. Judging by braking distances and gear selection, car drivers did so at similar distances. This deterred wheel sucking, though seemed to encourage hasty overtaking. In suburban stretches, presence is still excellent – at least from behind – but less efficient than SteadyPulse or Zoom.

This is a super-frugal setting that Cygolite cites as being suitable for day and night. Lumens aren't mentioned, but judging by others in my collection, I'd say in the region of 15. This hits the sweetspot on many levels: just bright enough for daylight, it's perfect for those early season afternoon rides that can last beyond dusk.

It's distinctive enough through the concrete jungle too, without being irritating to others in slow-moving rush hour traffic. Visibility is a very reasonable 130 metres along unlit lanes, maybe slightly further on clear nights, 100 through town.

Better still, it'll blink away for almost 30 hours between charges. That said – and this is something that goes for other slimline designs – peripheral punch is better in higher/more up-tempo settings. Low Flash pulsed just a little too slowly for my liking when tackling some roundabouts and ring roads.

These seem to burn at identical intensities and consume similar reserves, close to the six hours quoted. Zoom is more distinctive in congested traffic, whereas SteadyPulse is a clever hybrid and designed to keep us on the radar while making it easier for drivers to gauge our speed and, thus, approach/overtake.

Anecdotally, it seems to work very well, especially in semi-rural contexts between dusk and dawn. After dark, the arc of light is actually much better than profiles would suggest, providing some extra presence and extending its scope.

As its name suggests, this mode is designed with social riding in mind, and is claimed to run for 100 hours between charges. I say claim because I've not reached that milestone as yet – well past the 70-hour mark, mind, with no hint of a flicker. No figures are quoted, but using Cateye's Rapid Micro Rear as a gauge, around 10 wouldn't be far out. In group settings, there's safety in numbers and less need for a retina tickler.

I've really enjoyed using the Hotrod's intelligent modes, and in some respects it could easily be the perfect 'one rear light for all occasions'. However, urbanites and those who regularly mix things up should probably think about running a second rider/luggage-mounted model for reinforcements. In spite of 180/220-degree projections, I've tended to consider these strip-light designs as optimal for open road riding and paired them with a cheaper helmet-mounted unit with bigger lens area.

Versatile and very powerful light, but peripheral punch is good rather than great around town

I say, it's a bright, intelligent rear light that is easy to live with and extremely frugal in some settings.

- Sturdy and flexible Versatite™ mount attaches to most seat posts and seat stays, including aero styles

Not cheap, though competitive among similarly sophisticated models.

Overall, a sophisticated and powerful light designed for all conditions. Though certainly good around town, it's most visible out on the open road. In keeping with several similar priced and powerful competitors, short run-times mean the high steady setting is of limited use.

Would you recommend the light to a friend? Yes, a worthy contender for sleek bikes and long, steady miles on the open road.

It's a capable light with some very frugal settings, but better suited to open roads rather than town-centric riding.