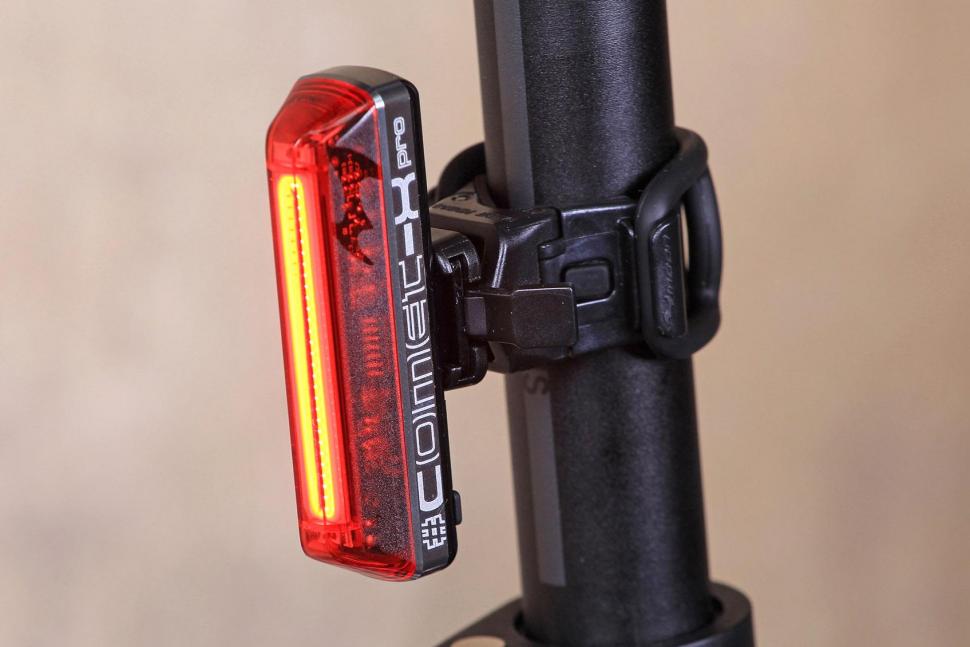 The Moon Comet-X Pro is an extremely powerful and surprisingly tuneable rear light.

It uses COB (chips on board) technology, meaning a whopping 30 diodes can share the same space, resulting in a brighter effect. A CNC machined aluminium heat sink ensures they lead long and productive lives.

The lithium polymer battery is reckoned to last 500 charge cycles and, like most USB lights, it meets IPX4 standard for water resistance. On paper at least you stand a sporting chance of getting four winters' hard use out of it.

The Comet-X boasts seven distinctive modes to cater for most scenarios. These are selected via a positive rubberised switch, which requires a reassuring definite two-second press before it comes to life and two deliberate prods to run through the settings. It's a little tricky to locate in winter-weight gloves, but becomes intuitive after a while and certainly no worse than several similar designs I've been testing recently, including the similar Cateye Rapid X (review to come).

The highest constant setting produces a sensible 40 lumens, which is quite bright enough for most nights. When mounted vertically and used as my sole rear light, friends reckoned they could spot me from 225 metres, along the lanes.

A 77-degree spot certainly helps, but despite the low lens profile, 270-degree bleed offers a decent cloak of light. No stealth moments when entering the flow of traffic from concealed junctions at rush hour. I'm also inclined to suggest it encourages drivers to give a slightly wider berth when passing. That said, it wasn't quite broad enough to serve as the only source of lighting on a tagalong or trailer.

Unfortunately, a run time of 1hr 22mins (1:30 quoted) isn't overly impressive. Lower (25 and 15-lumen) constant modes are brighter than their numbers suggest, but again, 2:02 and 5:23 are best described as middling.

Redemption came in the guise of flashing. The most extrovert 40-lumens has returned 7:24 (7:30 quoted) from a full charge, and we're talking visibility to 350 metres or so on a clear night.

Its intermittent pulsing counterpart bought another 2:15 and is very eye-catching mounted atop a helmet or messenger bag. The faster flash felt more comfortable around town as my only source of rear lighting, although suburban commuters will probably find the 20-lumen flash more than adequate, and it's proved ridiculously frugal – 15:08.

Running blinkies in the daytime has increasingly become the norm. The Comet-X's daytime flash is 80 lumens but literally sips power: 18:41 in the real world against the 19 quoted. On the one hand, 80 lumens is great on a misty morning but otherwise it's too aggressive.

> Read our guide to the best reflective clothing and accessories

Fed from the mains, charge times are 2hrs; bank on another 15mins or so from PCs or tablets.

As for attaching, Moon has taken the O ring route, which offers secure tenure, although a bracket is included too so the Comet-X Pro can cadge a lift on either the saddle rails or rider/luggage.

Ultimately, there is a lot to like about the Comet-X Pro, especially if you want a sleek, high power unit. However, while there is a weight penalty, there are cheaper and arguably more usable models such as Nite Rider's four-mode Solas 30.

Moon says: "The new Comet X Pro has been designed for everyday use, with an integrated high output COB LED."

I would broadly agree.

Seems well made and reasonably protected from the elements.

Rubber switch a little tricky to begin with, but choosing modes quickly becomes intuitive. Memory function also takes the faff out of finding your favourite.

IPX4 is pretty standard and ours has resisted heavy rain and blasts from the garden hose.

Competitive for this level of performance.

Overall, the Comet-X Pro is another extremely bright light with settings for most contexts and sensible run times. The 270-degree arc also seemed to encourage wider passing distances from other traffic. Its highest 40-lumen constant mode is very impressive but not the most practical because of its short run time.

Good choice of settings, high quality light, even in the lower modes, and sensible charge times.

Would you recommend the light to a friend? One to consider if they needed a really bright rear light.

Reasonably priced given the output and range of settings, but the 40-lumen constant setting's short run time means it's of limited use.